And The Old World Passed Away... The Geologic History of the Colorado Plateau 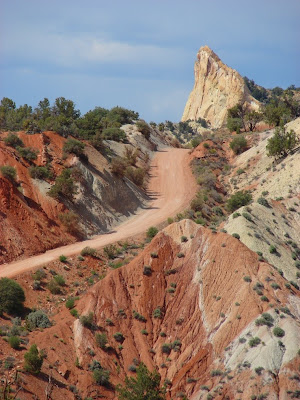 Hunting for words. It is sometimes hard to avoid using biblical metaphors when describing certain elements in the story of the earth. Whatever else you may feel about it, there is no doubt that much of the imagery can evoke powerful emotions: apocalypse, Armageddon, rivers flowing red with blood, a rain of fire and brimstone...God's judgement upon the transgressors.
Is the word catastrophe enough? Disaster? Yes, maybe disaster. In the original Greek, it means "bad star", presumably referring to the bad omens seen in astronomical phenomena like comets and meteor storms. Yes, maybe disaster is the word I am looking for. And a passage from Revelations 21:1 seems strangely appropriate: "And I saw a new heaven and a new earth: for the first heaven and the first earth were passed away; and there was no more sea."
I've been working on (well, off and on) a geological exploration through the Colorado Plateau region. I had no idea it would go on for so long, and with so many entries (since July, with 48 posts so far; if you are a glutton for punishment you can start catching up with the story here). Sometimes you just start out and then find your subject matter is just so rich, and the Colorado Plateau is certainly rich. In my last post a few weeks ago, we had reached the end of the Cretaceous Period, right about 65 million years ago. And I hinted that everything would change. On the Colorado Plateau, everything changed in a huge way. And thus my search (above) for the right words, the right imagery.
Disaster. For many, the world did end at the close of the Cretaceous. Anywhere from half to two-thirds of the species of animals and plants of the world disappeared forever. The dinosaurs were the most familiar victims, but there were many others, including plants, plankton, marine invertebrates, large sea-going reptiles, and a number of mammals. Many of the survivors were freshwater vertebrates with low food needs (crocodiles and the like), or who could hibernate (mammals), which suggests a nearly instantaneous event that lasted just a few years (although, it should be noted, this is a contested view; some argue it lasted thousands or hundreds of thousands of years). The cause? A giant asteroid (the"bad star")? A lot of researchers think so; a great deal of evidence exists for this hypothesis. Massive volcanism? Certainly a lot of lava poured from the ground in India right about this time (the Deccan Traps). Changes of sea level? The arguments continue, but something happened, something profound.
Another huge change took place in the plateau that makes the biblical passage from Revelations particularly resonant: the seas left the region for the final time. In fact, the entire region began to rise and massive mountains formed around the margins. Ultimately the plateau may have been uplifted as much as three miles. And erosion began. Not just a little, but a vast quarrying of nearly two billion years of sediments. Thousands of cubic miles of rock and sand simply washed away. Given the high elevation of the region today, the massive destruction of rock is destined to continue for millions of years, and eventually all that will remain will be a low plain eroded into the most ancient continental rocks. In other words, we are fortunate to be living in the times we have, where we can see, understand (in our limited way), and appreciate the history of this fascinating region. It is humbling in a way to consider that all the special places of the plateau country, the Grand Canyon, Zion, Arches, Canyonlands, Capitol Reef, all of these places are ultimately temporary.
At the end of the Cretaceous Period, the old world did pass away, but a new world emerged from the ashes. There was a new landscape, one of lakes, mountains and plateaus. And there were a great many new animals inhabiting the ecosytem, totally new creatures that had taken advantage of the disappearance of the giant reptiles. It was the Cenozoic Era.
The story continues! The picture today is the Comb Ridge Monocline, a huge rip in the earth's crust that formed during the Laramide Orogeny early in the Cenozoic Era.
Posted by Garry Hayes at 7:28 PM

Excellent post. I like the idea of the world ending as was known when the seas finally disapeared and the plateau rose.
Hope you are familiar with the new book "Ancient Landscapes of the Colorado Plateau" by Ron Blakey and Wayne Ranney.
I'm a Park Ranger at the North Rim and this book is a great gift.
Going to read your back posts about the plateau.

The Colorado Plateau series has been a great compilation of fine photos, geological stories, stratigraphy, and more. I know I've really enjoyed it!