What is it With Kids Today? 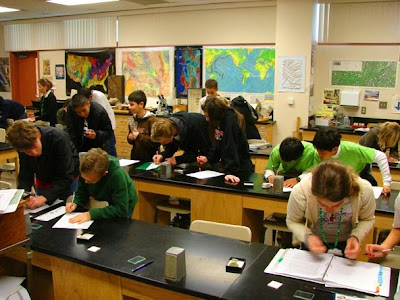 Actually, this isn't a rant, it's a compliment. I just got back from judging the "Fossils" event of our regional Science Olympiad, and as always, I am comforted about the future by seeing hundreds of our local junior and senior high school students competing not for a football or basketball championship, but for a SCIENCE trophy. And they work hard for their laurels, designing bridges out of toothpicks or straws, miniature cars, bottle rockets, and egg drop contraptions. A lot of the students compete in the trenches, in those events that don't get a lot of attention, but require a lot of scientific discipline, like physics, chemistry, environmental science, geography, and in my discipline, geology (rocks and minerals, fossils). They don't always know all the answers, but they give it a huge effort. And they are enthusiastic: many of the teams produce team shirts and hats, and the cheers at the awards ceremony rival anything I've heard at any football game.

I also have to salute the hundred or more volunteers that make the Olympiad work; the event is supported by the local school districts, but the volunteers do the footwork, judging the events, tabulating the scores, providing lunches, and keeping things from descending into chaos. It's also a chance sometimes to see my former students in their present-day role as teachers and mentors to these students.

The top schools overall earn the chance to advance to the state finals, and then to the national finals. If only we had a "Science" section of our local paper, and that people recognized the value of scientific and academic competition as much as they do sports achievements.

Is there an Olympiad in your region? Do you volunteer? It would be great if all the students in the country had a chance to compete in this sort of thing. If you want to learn more, check out the National Science Olympiad Website.
Posted by Garry Hayes at 3:00 PM

I have volunteered or led Science Olympiad events almost every year I have been in the Rockies. I am always amazed by the students and their excitement. It is a wonderful event that I strong encourage people to support.

Sure glad there are some kids still into earth sciences. And that you volunteer your time to encourage them.

I get pretty excited when kids on my fossil walk get excited.

I'm currently a geology undergrad and participated in Science Olympiad for 6 years throughout middle school and high school. Science Olympiad was definitely one of the highlights of my high school years and at my school, the Science Olympiad team was far more popular and successful than any of the sports team on campus. This year, I am going back to my regional competition to proctor the Dynamic Planet (Earthquakes and Volcanoes) event.

I can say without a doubt that it is because of Science Olympiad that I first became interested in geology. Thank you so much for putting in so much time and effort into Science Olympiad!