Digging Dinosaurs for Fun and Profit! 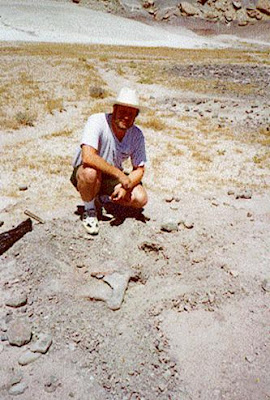 If this photo looks a little ragged, it is a scan from a pre-digital era, those golden olden days of about 1996 or 1997. It was one of the more exciting moments of my geology life, when we discovered a neck vertebrae of a Camarasaur in the wilds outside Green River, Utah. Every kid imagines discovering a dinosaur, and most get in trouble at some point trying to dig up Mom's roses trying to find a Velociraptor or a T-Rex in the back yard. I have come to realize over the years that the geologists and paleontologists that I know are those kids who never outgrew that obsession. It was certainly true in my case.

We pretty much tried to do the right thing. We weren't sure at first that we were uncovering bone. As we outlined a bit more we realized that it indeed was, and (barely) resisted the urge to dig up the whole thing. We covered it over, mapped out the location, and reported the find to the Utah authorities. They met us the next year, and we showed them the site. The next year when we came back, the fossil was gone! We feared the worst, thinking that illegal bone hunters had plundered the site.

To our relief, we found that the state had excavated bone a few weeks earlier, and eventually they were kind enough to give the bone to our local natural history museum as a permanent loan, so local kids can see what the real thing looks like. It is the only dinosaur sample in the collection.

I have been lucky enough to travel widely, and I have seen some incredible dinosaur exhibitions, but there are few opportunities for our local kids to see dinosaurs and other fossil specimens. A few weeks ago, I found out that a local doctor has an extensive collection of spectacular fossils, including a great many ammonites, trilobites, sea-going reptiles and several Chinese dinosaurs (I believe it was a monoclonius or protoceratops; it was a quick perusal). I understand that the owner often makes his collection available to local school children. In a sense it is a shame that the only chance our local kids have to see these treasures is that they are in a private collection, and not a widely accessible public museum (for what it is worth, we are trying to remedy this with a new Community Science Center that will be constructed in about three years).

I bring up this whole subject because of a geology.com reference to an article in the Guardian about the conflict between rich private collectors and financially strapped museums. We can't offer our local students a rich fossil experience, so in our area it is the private collectors that take up the slack. When I mentioned the collection to our local Paleontology professor, she expressed some anger that such specimens were in private hands, and not on public display. So I was left kind of conflicted about the appropriateness of these private collections. One of the arguments in the article is that without private for-profit excavations is that these specimens will otherwise be eroded away and lost to science entirely.

The archaeologists have long had this problem - of private collections by amateurs.

In Nevada, the professionals have tried to promote working with the amateurs through local (and national?) groups, for example the Amateur Archaeologists of Nevada (Am-Arks).

One problem with private collections is that the public often never gets to see the specimens - which really should be turned over to museums or universities. Also, at least in some kinds of collections, the collectors don't have any information about where and when they collected the specimens, and a whole lot of pertinent scientific information is lost - consider, for example, the dirt, soil, or rock formations and layers that each specimen came from if dug out - or even whether it was lying on the surface or not, what kind of surface, etcetera.

For fossil collecting, I think that if there isn't enough money to fund digs and collections, then the private collectors should actually be doing the funding, and not doing it in order to keep things for themselves. Also, museums and other organizations, like your new science center, can often hire or contract with people who know how to raise money - some people are very good at that. And consider all resources in the area, including any mining companies working in the state (that's not very many in California).

I wonder about the doctor who is keeping this wonderful private collection. It is good that he at least makes it available for school field trips. Does his collection have geologic and location information available? Why doesn't he donate it to a local museum or school?

If you take children to see it, depending on their age, it could be an opportunity to go into the problems and ethics of private and illegal collecting of fossils and archaeological artifacts. (The Antiquities Act does apply to fossils).

I don't know about all the implications, though. I personally have bought a trilobite or two in my lifetime, although only when I know where they are from - but I haven't bothered to find out if the collectors have gotten a permit to collect. I'll probably have to get better at paying attention to what I do!