When the Slickrock is Really Slick! 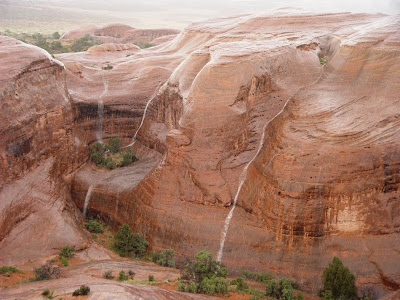 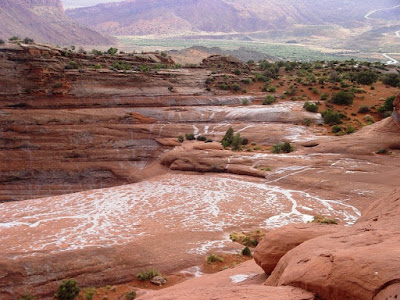 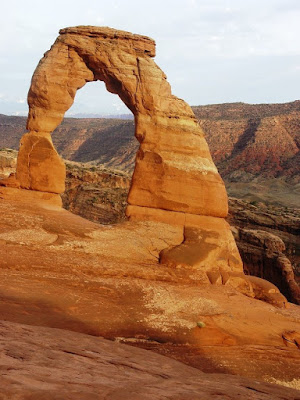 Two days to go before we embark on our journey to the Colorado Plateau!

Today's montage is from one of my favorite moments in 2005...a huge cloudburst on the trail to Delicate Arch in Arches National Park. The first is a view from near the end of the trail during the height of the storm, including nearby lightning strikes. The second is just after the storm passed. Within twenty minutes or so, the sandstone was already drying out and the setting sun caused Delicate Arch to glow. It is hard to describe the adrenaline, the odors of wet desert vegetation, and the utter wildness of the moment, since the rain had driven away all but a few stubborn stragglers like myself.

Arches National Park has one of the largest concentrations of natural arches in the world, somewhere around 300, depending on the specific definition of 'arch'. They formed in the Jurassic Entrada Sandstone, which was deformed and jointed by rising salt domes. It is one of the most beautiful parks on the plateau. A classic book on the region is "Desert Solitaire" by the late Edward Abbey. Published in the late 1960's, it has stood the test of time, and I highly recommend it if you ever travel out this way.
Posted by Garry Hayes at 10:49 PM

There was once on the Web a lovely photo of Uluru, deep in the Australian Outback, with rainwater sluicing down its face into the sand, a magical moment.

Fiery Furnace trail is a must do hike if you haven't done this before. Lots of shade to help with summer temps. Enjoy!