Whither Go the Redwoods? Smoke in the Temperate Rainforest 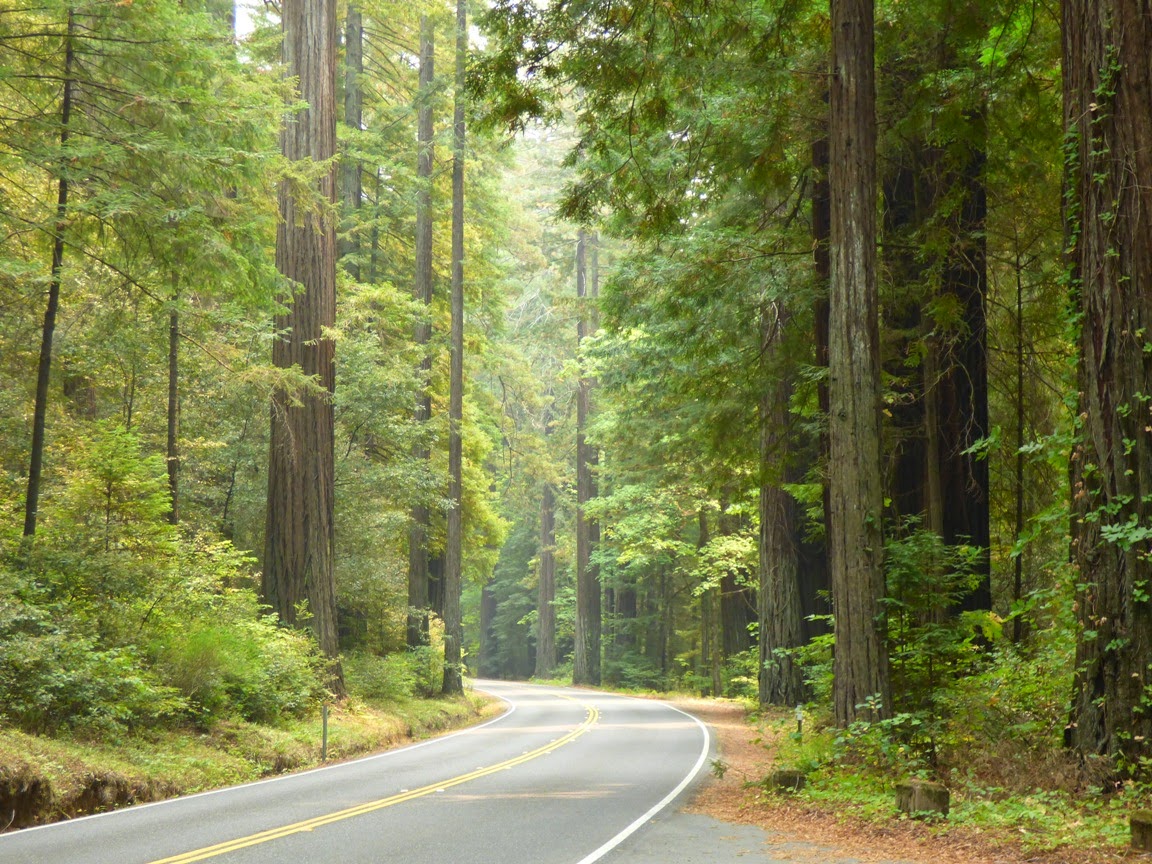 Our long journey through western Canada and the Pacific Northwest ended a few days ago, but we lingered in Oregon and Northern California for a few days to visit family, and frankly, to avoid the heat wave that seemed to engulf the southwest and interior valleys. Our route took us down the Oregon coast and into California at Crescent City and Fortuna, and then into the incredible Redwood forest. 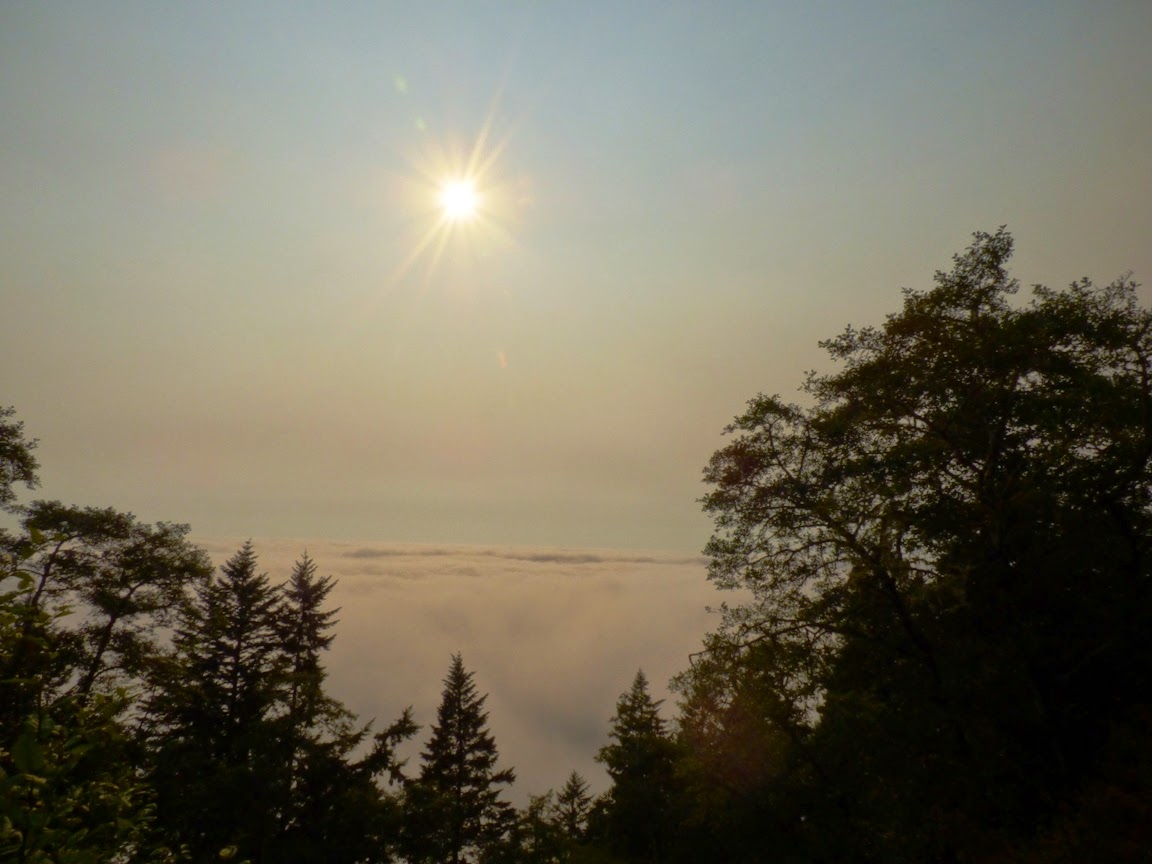 The sunlight just wasn't "right". It was as if someone had put a dimmer switch on. Everything looked the way it was supposed to, but there was sort of an orange-brown glow. The shadows were bluish. We had heard vague reports about fires burning across the west, but we couldn't see any obvious smoke plumes. But the smoke was there. 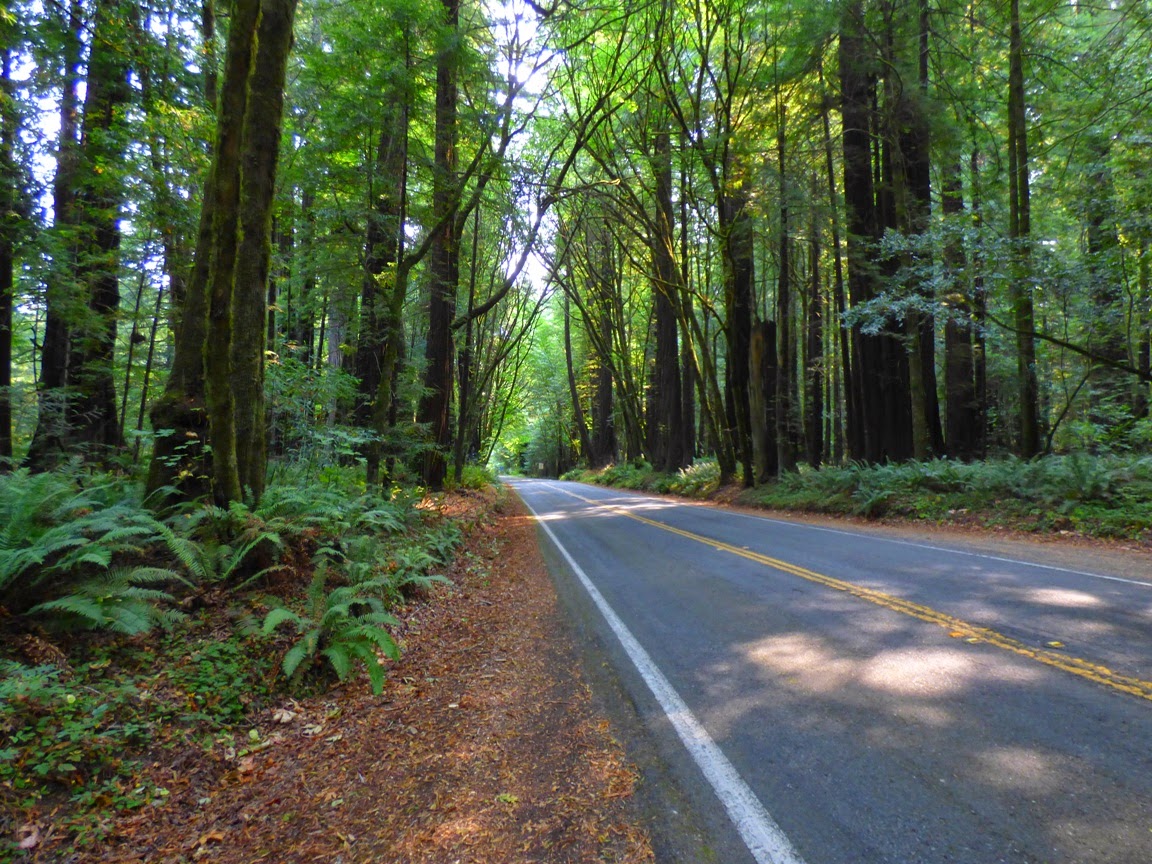 The forest was stunningly beautiful, though. We had a long road ahead of us that day, but we couldn't help but linger through the early afternoon. The Coast Redwood (Sequoia sempervirens) is an ancient species with a heritage that extends back into the era of the dinosaurs. They were once widespread across the northern hemisphere, but the ice ages restricted their range and now they exist only in a narrow coastal strip from the Big Sur coast to the Oregon border region. 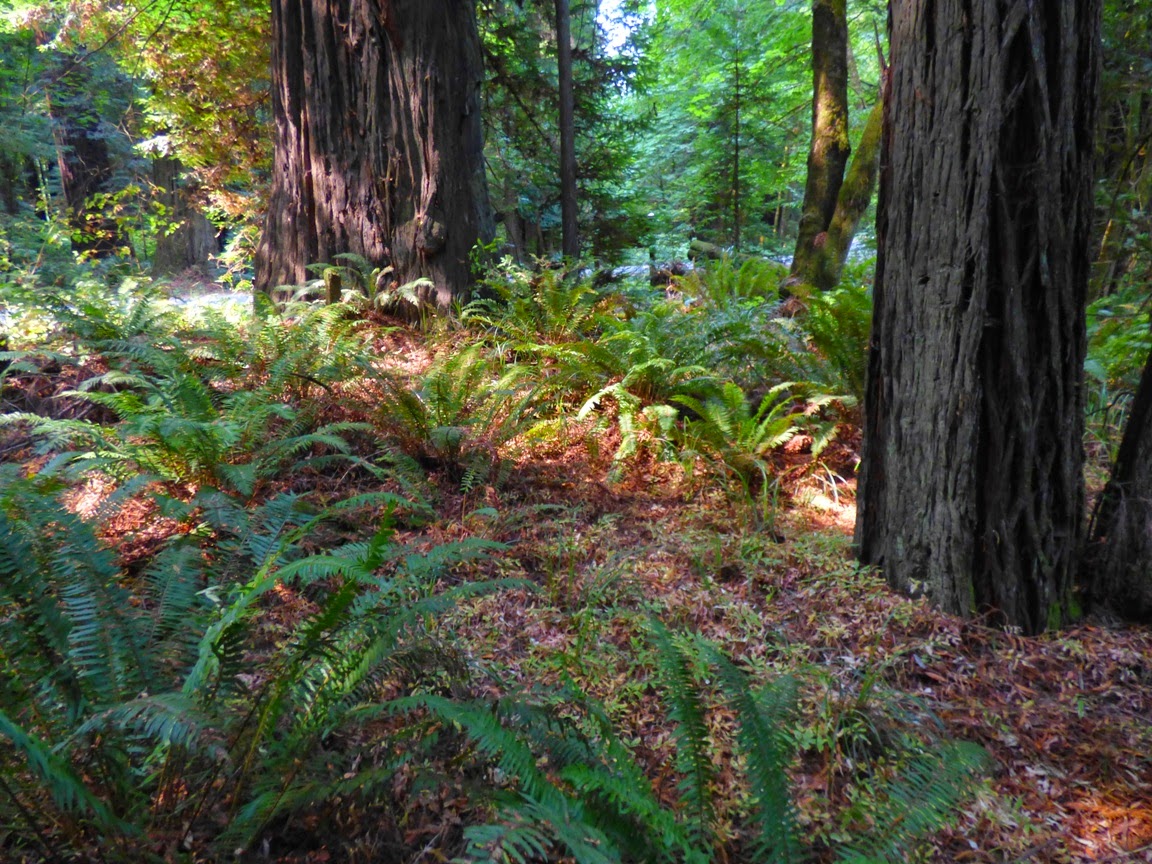 The trees require moist temperate conditions, with plentiful winter rains, and summer coastal fogs. As we wandered through the coastal temperate rainforest, we noticed something disquieting: it wasn't moist. It was very dry. 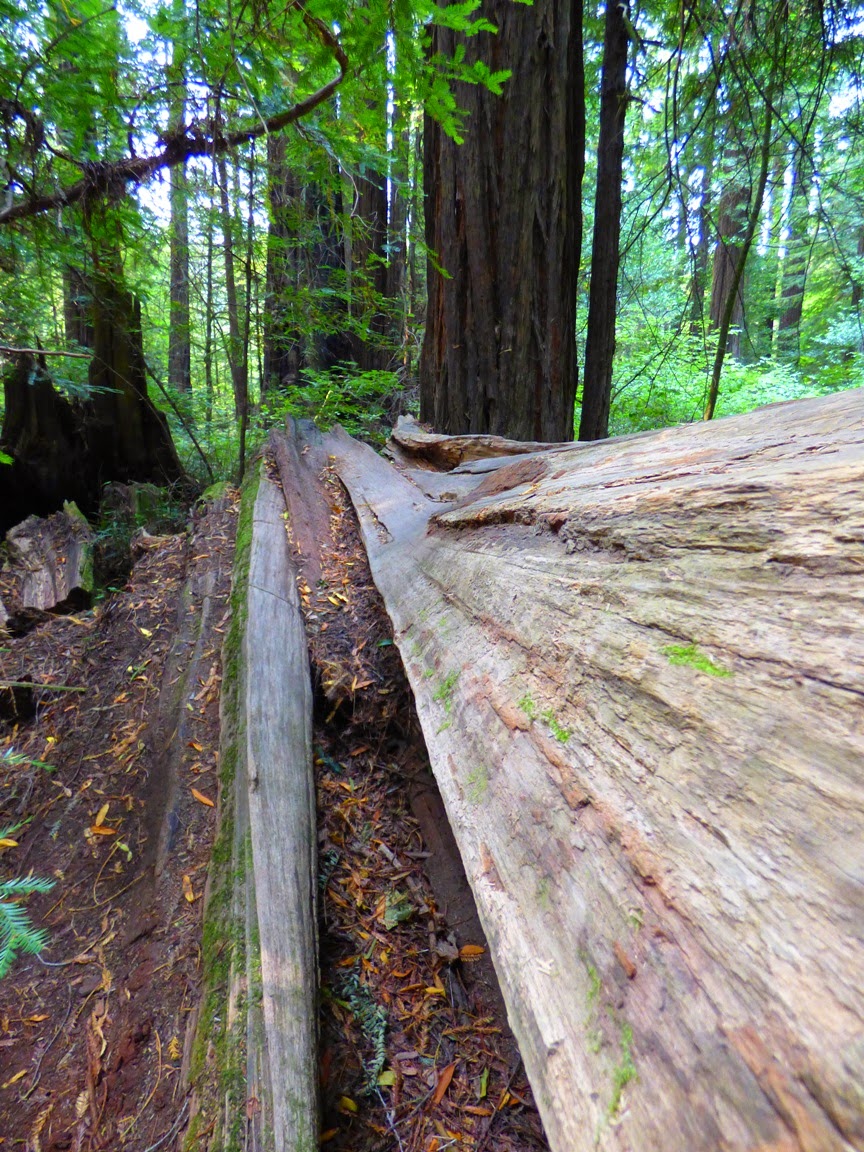 The understory was green, and the shade was cool, but there was none of the dampness that I associate with these forests. My perceptions were confirmed when we stopped in at the visitor center for Humboldt Redwoods State Park. The rainfall for the 2013-2014 water year was an astounding 27.96 inches. In the Central Valley where I live, that much precipitation would be astounding, but here in the rainforest, it's scary. A display offered the rain totals for the last 70 years, and in all that time, only once before has the yearly total been less than 40 inches. 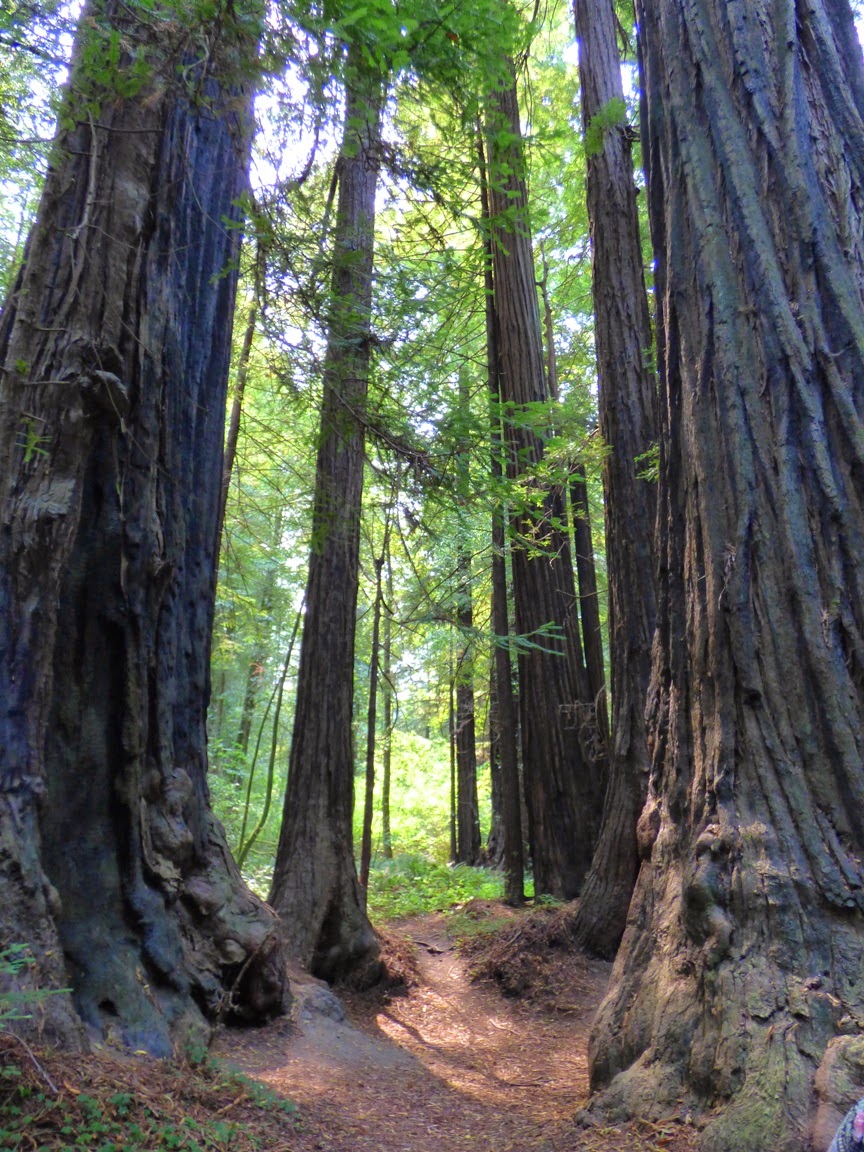 The average yearly rainfall is around 60 inches, and four times the totals have exceeded 100. But this year is the second driest ever at Humboldt, and in most of the state it is the driest year ever recorded. We are in the grip of a horrific drought, and there are no signs that it is going to break soon. 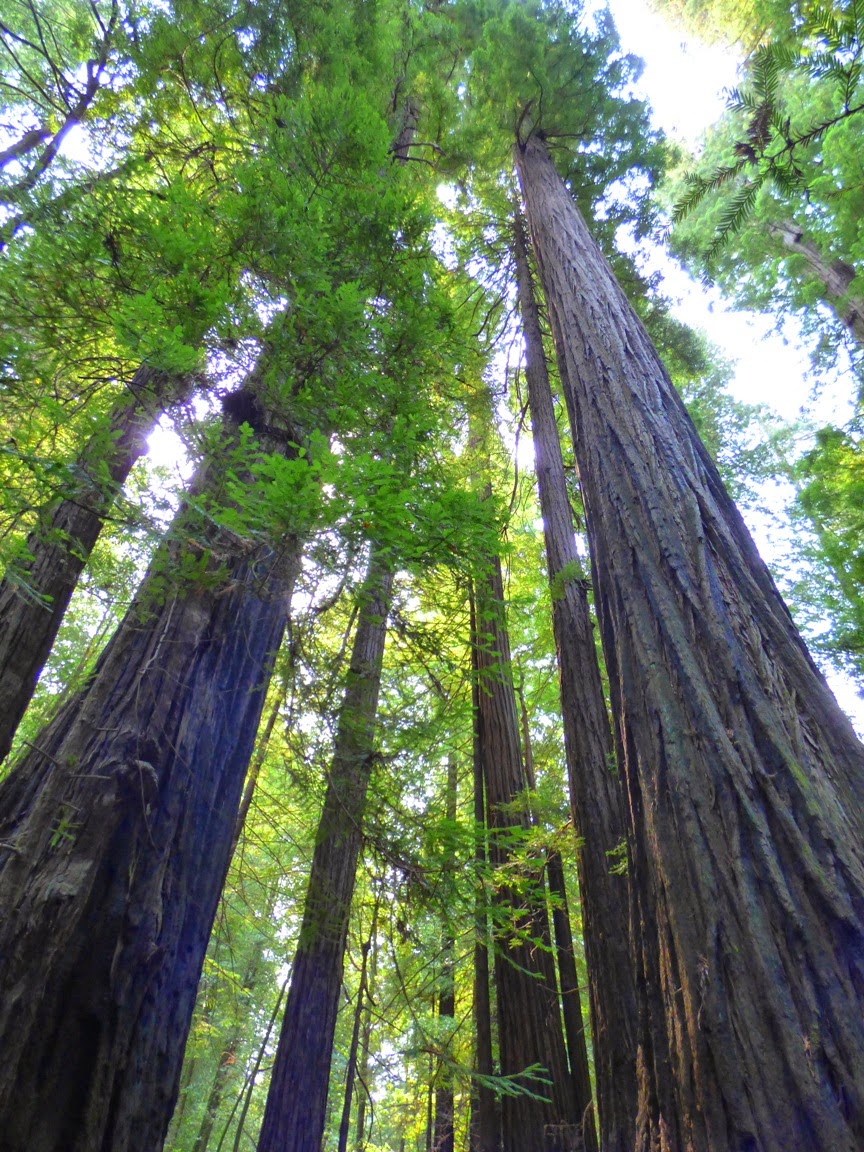 We are witnessing and living through huge changes in the climate regime we tend to regard as stable and constant. Glaciers worldwide are receding, snowfall totals in our Sierra are declining. We are unaware on a daily basis unless there is an unusual heatwave or extended drought like the one we are experiencing now. But the changes are happening. The summer fogs are not as common as they once were. Temperatures are warming. Sea level is rising. 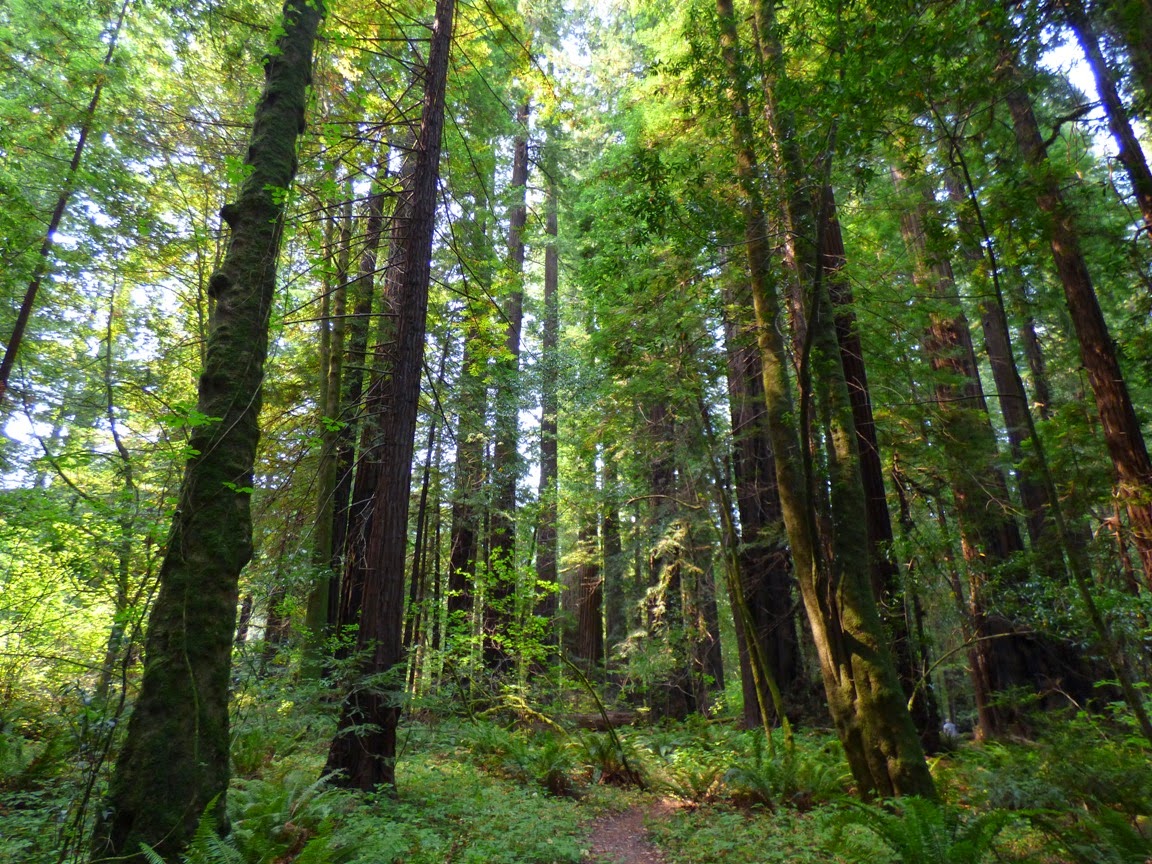 And the fires are burning. In places the climate has changed so much that when the vegetation returns, it will be different than what was burned away. Wildlife species are moving uphill to escape warming conditions, and some are disappearing because they can no longer move upwards. 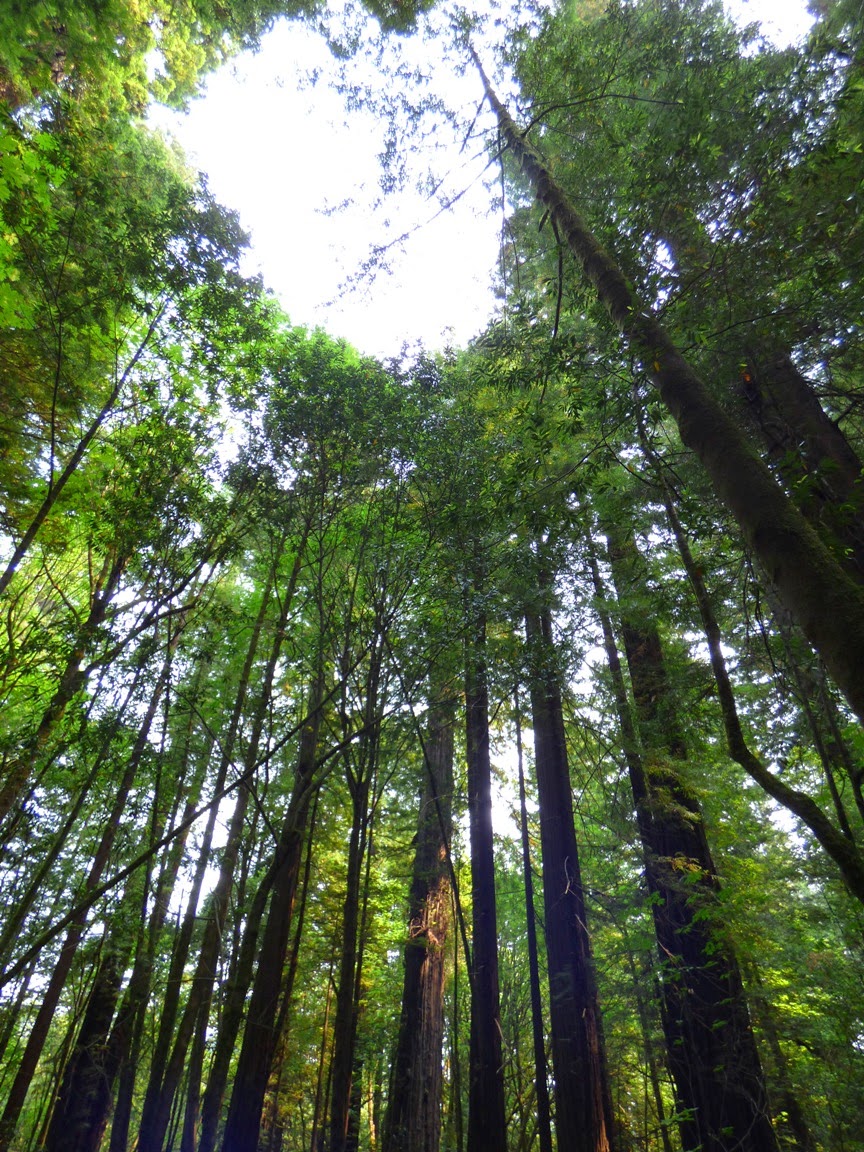 It may be that in a few decades or centuries, California's state tree will only be able to grow in Oregon or Washington. We've cut down 96% of the original old growth Redwood forests, and now climate change may very well take care of the rest. 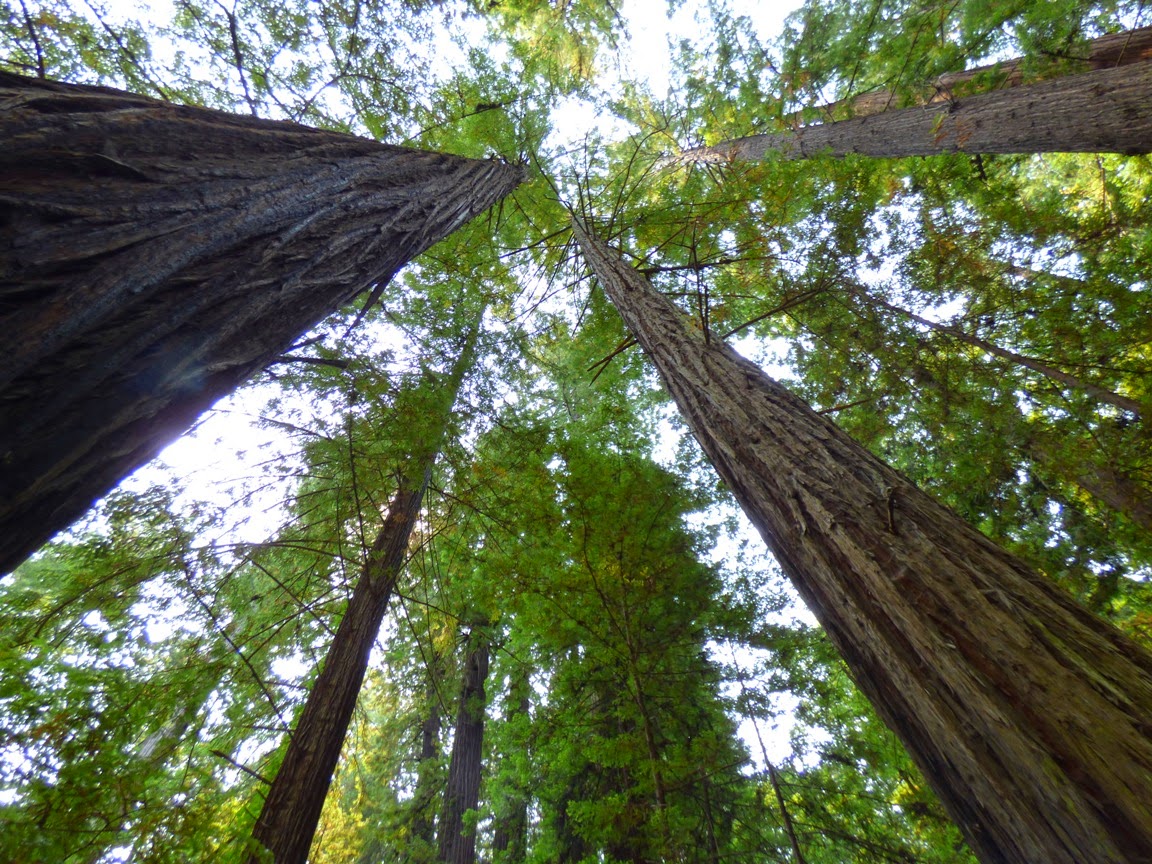 I'm praying for a break in the drought this year. But I'm also hoping that those who govern us will finally come to terms with the huge threats that global climate change presents. Money still does all the talking in politics, and the money says to protect the status quo. We need people of vision, not political hacks who look out for their financial benefactors. I'm hoping, but I'm not hopeful.

There are lots of beings who depend on us. There are the animals and plants, of course, but there are also our children and grandchildren. What world will we leave to them?

I'm totally with your thinking. The larger focus of being "stewards of one earth" instead of doing what has been in the past, industrially and agriculturally, - has to stop. We're not much smarter up here in Canada, as we silently watch permafrost melting, ice receding, and I can't even discuss the latest tailing pond disaster without choking up. Vision. We need vision in our leaders.