Northern Convergence: Vancouver Island, the Plan That Was, Part III

Continuing my brief series of things my students didn't see on Vancouver Island during our Northern Convergence tour of Canada, we reach a place my students did in fact "see", as in we were there and looking around, but the students didn't see what we saw. Malahat Summit is 352 meters above sea level, about 1,155 feet, and is the local high point on this part of the Trans-Canada Highway between Victoria and Nanaimo. Several of my guidebooks called this a "must-see" stop, so I was anxiously watching for the turnoff. We then found out why scouting trips are a good idea...road construction had closed the summit rest area (above). I was disappointed, but found out I hadn't read the guides carefully enough, as the all-important viewpoint was actually a short distance down the hill.
We pulled out and immediately noticed two things: the view was stunningly spectacular (I've been using those two words a lot), and there was room to park maybe half a dozen vehicles. When the students were with us in a few days, we would need a stroke of luck to have enough parking for our whole group (there would be no turning back on the narrow highway, and the viewpoint was busy).
Sometimes we don't always appreciate the scale of things. A thousand feet, 300+ meters, might not seem like all that much, but when you have been driving up a hill from sea level in a thick forest with no view, and a view suddenly opens up, it is like flying. The overlook is apparently at the top of an old marble quarry, so there is extremely steep terrain below. 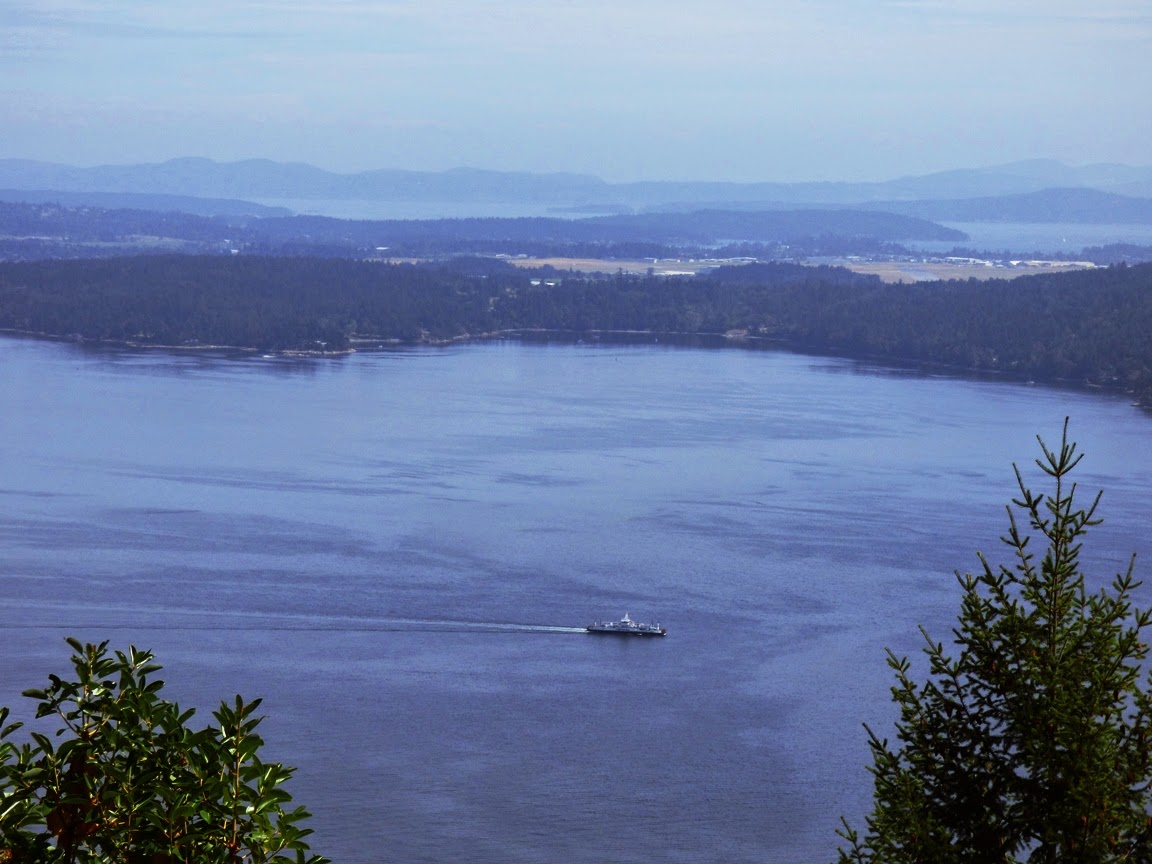 The view extends across the Saanich Inlet to the Saanich Peninsula and beyond to the Strait of Georgia and the U.S. mainland north of Seattle. Though conditions were very clear, wildfire smoke obscured the distant horizon. Otherwise the volcanic edifice of Mt. Baker would have been visible (it turned out we had a bit of trouble seeing volcanoes on this trip). The Peninsula is a lowland covered mostly by glacial debris with occasional knobs of bedrock sticking out. The moderate climate makes the peninsula a good region for dairy farms and botanical gardens. Butchart Gardens were directly across the Inlet from our location, filling an old marble quarry (the marble is Triassic in age, metamorphosed from shallow marine limestone).

Do you have a sense of the scale of things yet? The barren brown field on the peninsula in the picture above is actually Victoria International Airport. And that little boat in the pictures above? It's actually a good-sized ferry.

In the near rainforest environment along the highway, rocks are sort of a rare sight. We saw lots of them, though, courtesy of some major road construction activity, but there was nowhere to stop and take a closer look.
There were also rocks behind us at the viewpoint, which I briefly glanced at, seeing some kind of nondescript metamorphic rock of some kind. I found out later from the guidebook that this outcrop was actually granitic rock. It's simply been covered by a cement-like coating of limestone dust from the quarry activities down below. I've been fooled by this sort of thing before, most notably at Tehachapi Pass in Southern California.
So...this business of what we saw and the students didn't? We actually made it here a few days later. We had time, and we even had parking! We pulled off the highway and saw...nothing. We had driven right up into the cloud cover and were surrounded by an impenetrable fog. I said nothing about what they were missing, and most of them probably don't even remember pulling out for a moment at the locality. As I've said before, the students had an interesting day and saw great things, but not this at this spot. Some days are like that.

I've mentioned guides that I was using. Two of the most useful were The Geology of Southern Vancouver Island by Chris Yorath, and Geology of British Columbia by Cannings, Nelson, and Cannings.