Scenes from a Shield: Isn't This Supposed to be Basalt?

Medicine Lake Highland at first glance sure looks like a classic version of a shield volcano. The gently sloping flanks indicate the presence of non-viscous basaltic lava, and the lava tubes we explored were certainly composed of basalt. As we moved further up the flanks of the mountain we encountered tree molds (those were the mystery holes in the previous post, as Lockwood correctly surmised) that also occur in basalt flows. By the time we reached the summit of the volcano and the caldera at Medicine Lake we were starting to see different kinds of lava. Some gray colored andesite could be seen on the north flank of the caldera.

The most striking kind of lava was what we saw at Glass Mountain, the most recent lava flow on the mountain, dating to only 900 years ago. 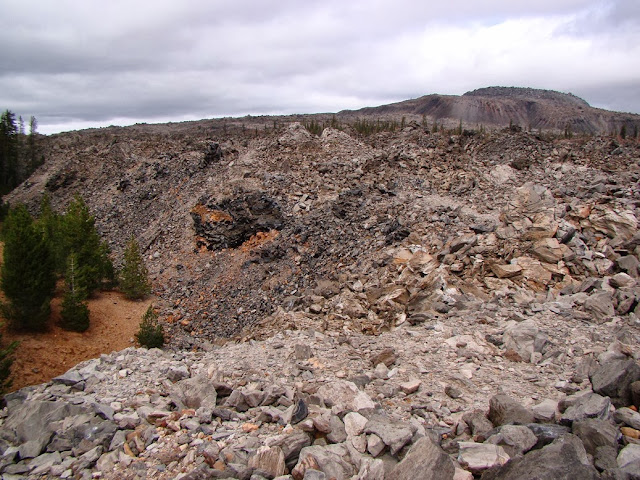 Everything about Glass Mountain is a complete contrast to basalt. The steep debris-covered flanks of Glass Mountain show that the lava flow was highly viscous and barely able to flow at all. The light color of the lava contrasts sharply with the black of basalt. The mountain is composed mostly of obsidian and pumice, glassy rocks that usually have a chemical composition equivalent to rhyolite. 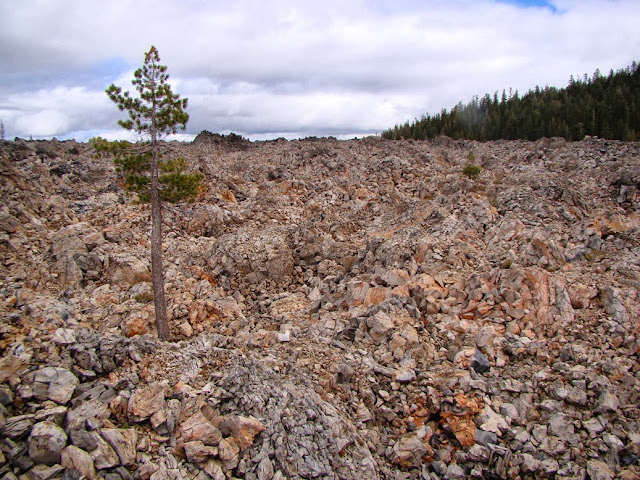 Glass Mountain is a typical example of a plug dome. Such volcanoes are small, usually no more than a thousand feet tall, with steep rubble-covered sides. The lava flows from the cone are rarely very long, and are thick and very rugged.

One might wonder what rhyolite is doing on the summit of a gigantic basaltic shield volcano. Such things are not usually seen on Hawaiian shields, for instance. A bit of information about the melting points of minerals and the composition of the crust can help us to understand what happened on Medicine Lake Highland. 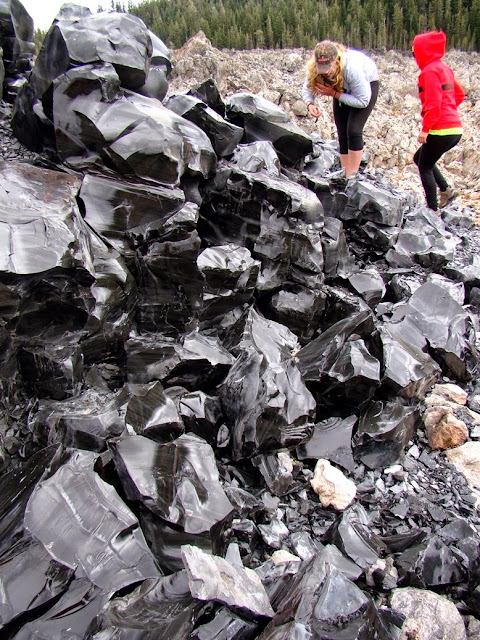 The minerals found in basalt have high melting points. For basalt to be in a liquid state requires temperatures of 2,000 °F or more. Rhyolite on the other hand contains minerals that melt at lower temperatures, maybe in the range of 1,300 °F.

Oceanic crust is essentially composed of basaltic rock. Continental crust is more granitic in composition, and granite is what you get if rhyolite cools very slowly (granite and rhyolite are made of the same minerals, in other words). 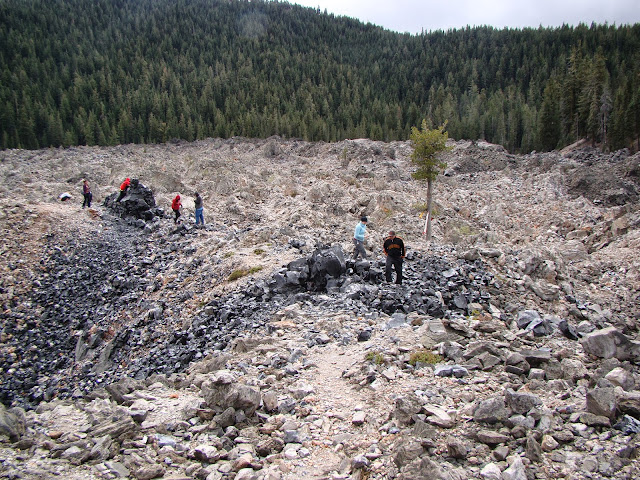 Medicine Lake Highland is situated on the diffuse boundary between the Cascades Province and the Basin and Range, a region that is being stretched or extended in an east-west direction. The extension is causing faults to form in the crust, and the faults are allowing basalt to approach the surface from its source in the Earth's mantle. The basalt magma, as noted, is very hot.

As the basalt rises through the thick granitic crust, the intense heat causes melting of the granite, and magma chambers form that are composed of rhyolite. The basalt and rhyolite magmas don't play well together, and don't readily mix. As a result, some eruptions are basaltic, and others rhyolitic. This phenomenon is called bimodal volcanism. 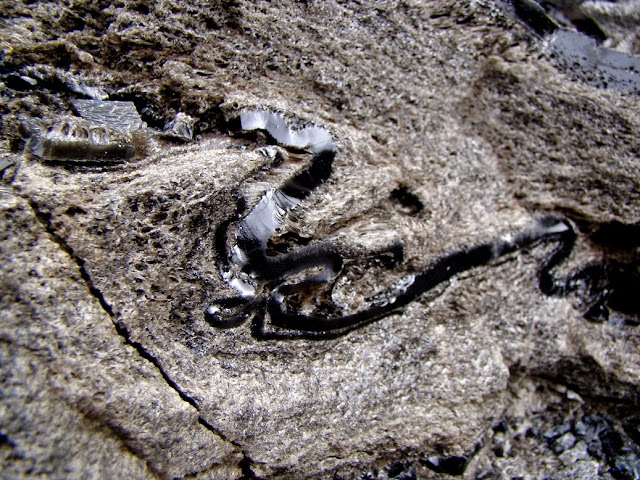 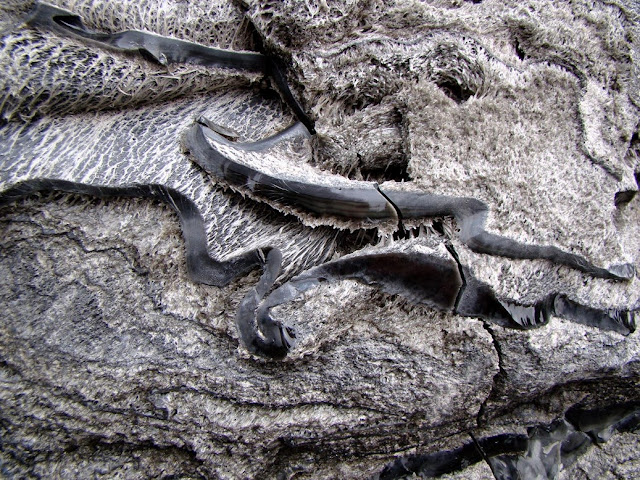 We finished our exploration of Glass Mountain and headed down the heavily wooded south flank of Medicine Lake Highland. Brief views through the trees offered wonderful vistas of the surrounding terrain of the Modoc Plateau.

Medicine Lake is not a "typical" Cascades volcano like Rainier or Shasta but there is at least one other massive shield complex to the north in Oregon at Newberry Crater. Both are famous for their obsidian domes. 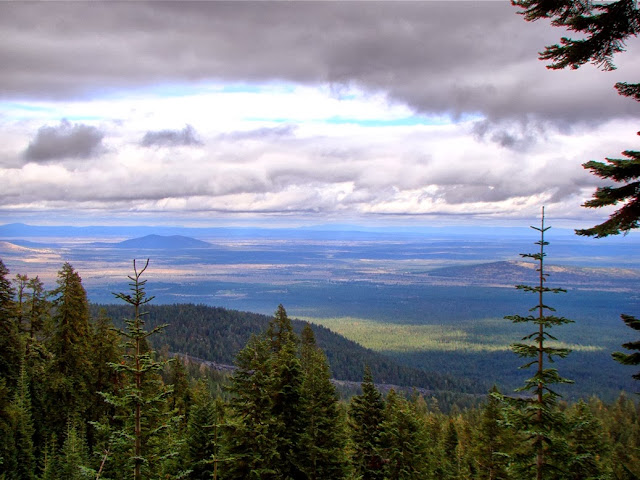 We had one more stop for the day, on the Giant Crater Flow, a basalt flow that is comparable to the Mammoth Crater flow that produced the lava tubes in Lava Beds National Monument. One tube system from Giant Crater extends for fourteen miles down the south flank of the Highland. At Jot Dean Cave, there was an extraordinary exposure of ice. 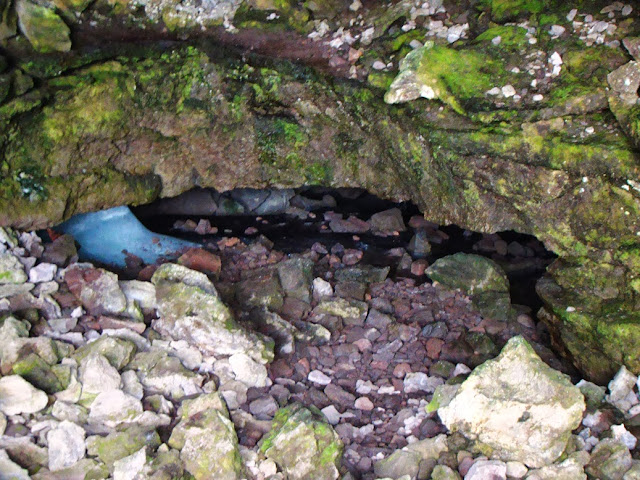 Jot Dean Cave doesn't seem to extend all that far, or at least none of us wanted to find out. The reason is the rather steep slope at the edge of darkness that is completely covered with very slick ice, even in late September. The strangest part is the huge mass of ice on the left side of the entrance that refracts light from the outside and seem to glow internally. It's actually kind of eerie; I imagined that the ice had formed around some poor spelunker and his light was still glowing... 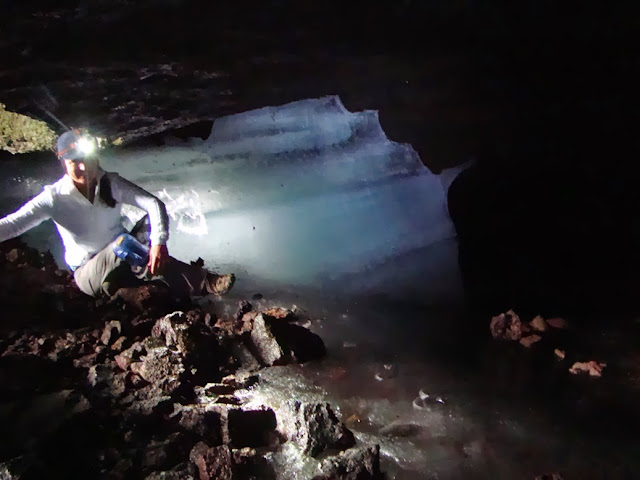 We got back into the vehicles and headed towards our camp for the evening at one of California's most beautiful state parks.
Posted by Garry Hayes at 10:54 PM

I saw obsidian/pumice layers around the Salton Sea and the huge pile of obsidian at Newberry is very cool.