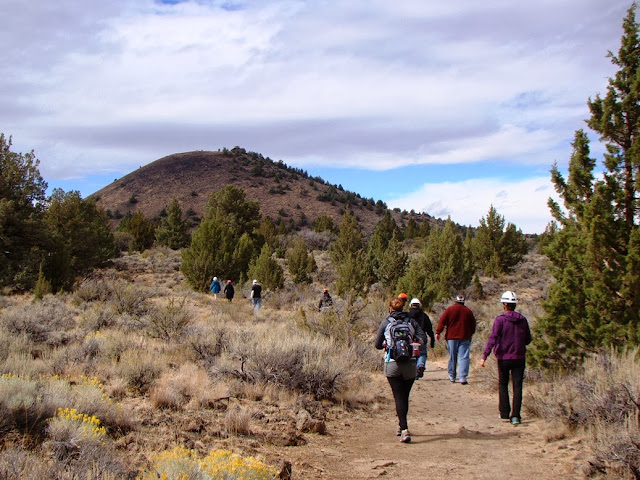 Lava Beds National Monument is a special place, one of my favorite spots to visit in California. It's so different than what people expect of a California park: where are the beaches, the mountains, the Redwood trees? It's way out in the hinterlands of northeastern California, about 30 miles south of Klamath Falls, Oregon. In the previous two posts, we mentioned the historical value of the park as a monument to the memory of the Modoc People, and as a great place to see basalt flows. But one of the other big reasons the monument was established can be seen in the picture below.

What? You don't see anything except piles of boulders? They actually actually reveal a bit of the inside of a volcanic system. Not the really deep stuff, but the plumbing system that allowed molten basalt to flow many miles without solidifying. The picture below is of a collapsed lava tube system. The park has many others that haven't yet collapsed. 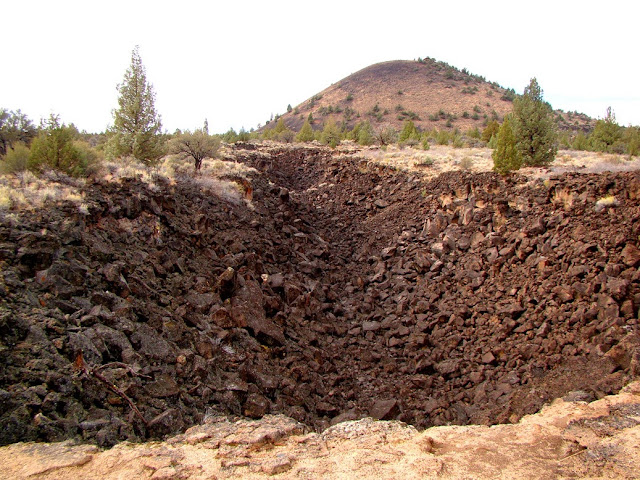 Lava Beds has a startlingly large number and variety of lava tubes. In a small park, perhaps no wider than a dozen miles at any point, there are more than 700 individual caves with something like 75 miles of passageways. And a large number of them are open and accessible for exploration. 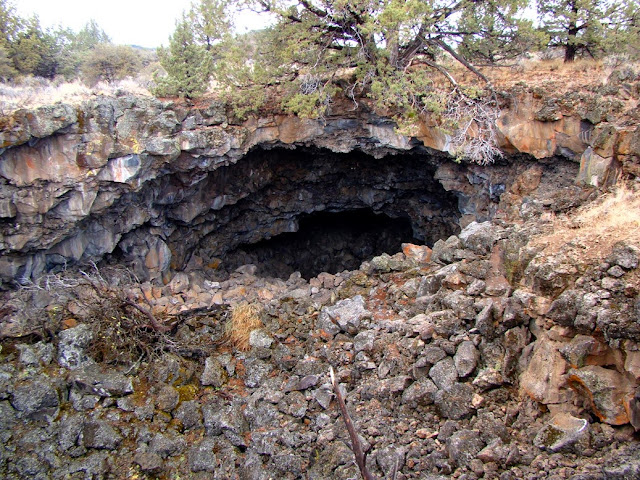 We paid a visit to four of them during our teaching day, and the students visited another half dozen in the evening after the academic day was done (it doesn't really matter in a cave whether it is day or night, after all). We hiked first to Symbol Bridge Cave, a short cave on the main Mammoth Crater lava flow system. The tube, which is collapsed in many areas, is around 12 miles long, extending across the park. Modocs or other Native Americans left pictographs on large basalt boulders at the entrance. 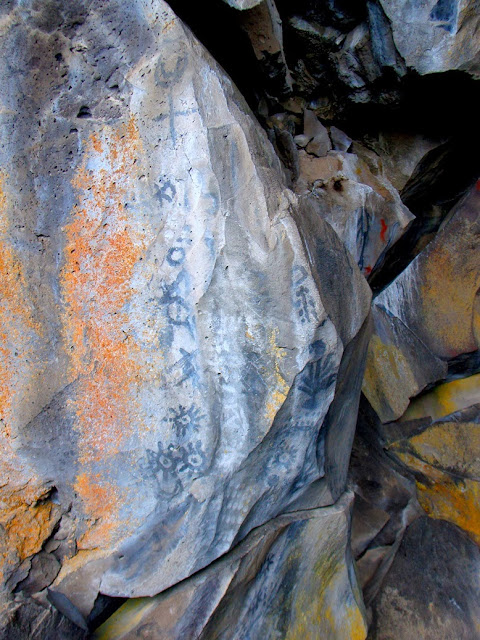 Big Painted Cave is just a short distance away on the same tube system. It also has some pictographs (hence the name), but in the bottom it also has an interesting sight: an ice pool, down inside a second level. Open water of any kind is rare in the park. Basalt flows tend to fracture while cooling, so water tends to seep into the ground and disappear, later emerging from large springs around the margins of the volcano (Medicine Lake Highland). If you have a plastic water bottle next to you, you probably are drinking some of the volcanic water from MLH. They bottle it and sell it. 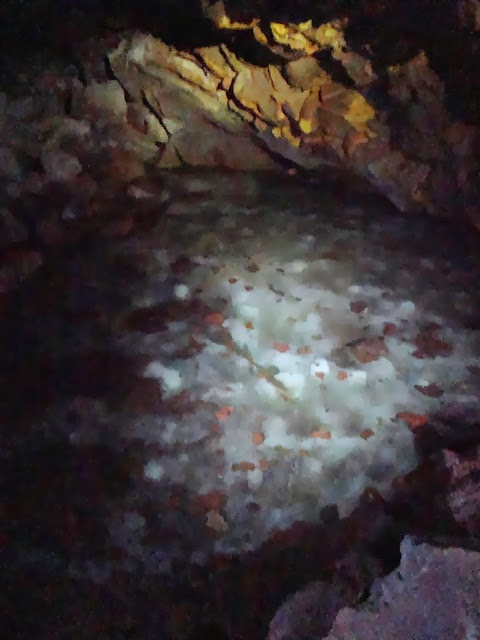 Our next exploration took us to Skull Cave, the largest cave opening in the park, at about 60 feet high and 60 feet wide. It somehow feels bigger as you walk into the darkness. It also has a sinister aspect, one that earned the cave's name. Just at the point where the darkness becomes complete, the cave drops off into a deeper chamber, a fall of about 20 or 30 feet. Numerous bones were discovered there, including those of two humans. Luckily, today there is a trail and metal ladders that avoid the dangerous drop-off. There is a large ice pool in the depths of Skull Cave as well. 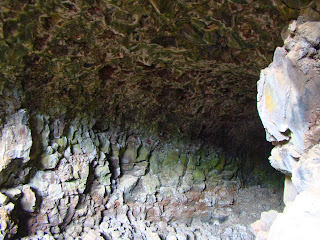 Somehow I keep mentioning Star Wars things; in the last post in was a Sarlaac. In this one, I couldn't help but feel like I was walking through the belly of the giant worm cave in the asteroid field of "The Empire Strikes Back", where the Exogorth lived. 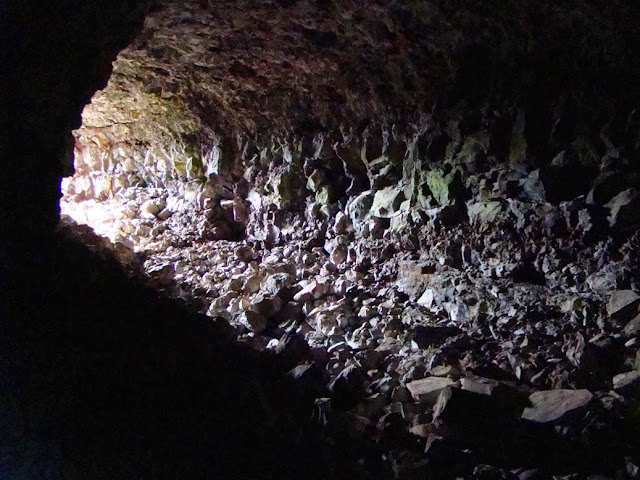 Our next stop was Valentine Cave. It is different than the others. The majority of caves in the park are part of the Mammoth Crater Flow, which emerged around 30,000 years ago. Valentine's flow (called the Valentine flow, by incredible coincidence), erupted only about 11,000 years ago. The cavern passages have far fewer collapsed sections, and many of the collapse blocks that were in the cave were removed by the CCC during the Depression years. The cave is clean and easy to stroll through. 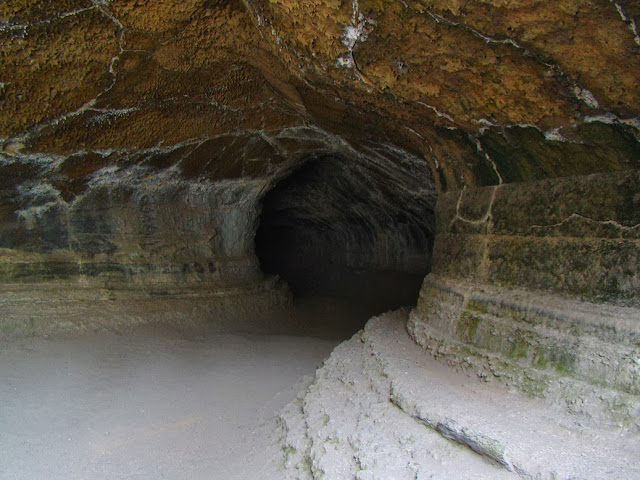 Many typical lava tube features can be viewed in the passages, which total around 1,600 feet. They include terraces and benches that represent the drop in the flow level during the waning stages of the eruption. The ceilings are covered with thousands of lavacicles, where lava was dripping from the roof of the tubes. They make a good argument for wearing helmets whenever exploring the caves. The spiky rocks can put a real dent in someone's skull. 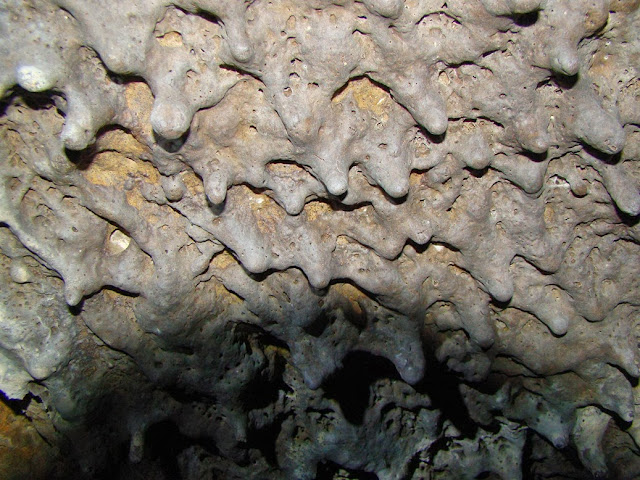 Lava tubes, like all caves, can be notoriously hard to photograph. The dark basalt tends to absorb light. Camera flashes wash out the scenes and leave no shadows to provide depth. I experimented with time exposures to varying success, using my flashlight to paint the walls. The white material is sodium bicarbonate and soluble salts that have seeped through the fractures from the ground above. One can see the popcorn-like surface of the last lava to flow through the tube. 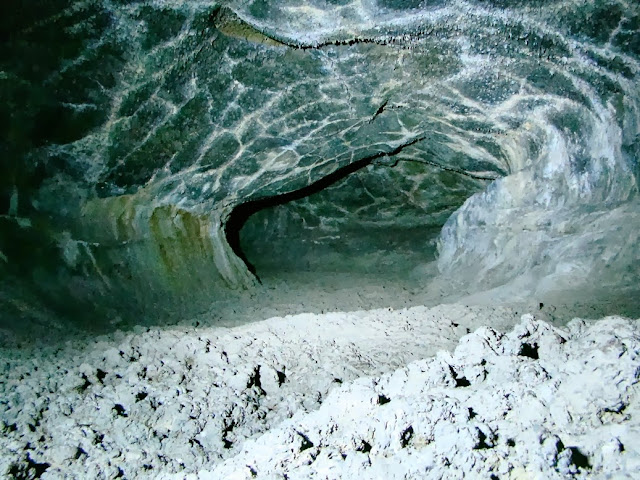 I was happiest with the shot below. It shows best the three dimensional aspect the cave.

The caves of Lava Beds are fascinating. Some provide micro-climates where ferns and other unusual biota survive, despite aridity of the high desert environment. Others are full of ice (and are so fragile that tours are only offered in winter, since the warmth of people can cause melting). Quite a few have multiple levels, as one lava flow followed another. Post Office Cave has at least five of these levels, and Skull Cave has three. A large number of animals and insects live in the caves, including several endangered bat species (all bat species in the country are endangered by White-Nose Syndrome, which is spreading west from caves back east).

The park service has provided a pleasant campsite among the juniper trees, and a newly constructed visitor center. They sell cheap bump hats, and loan out flashlights for visitors to explore caves. 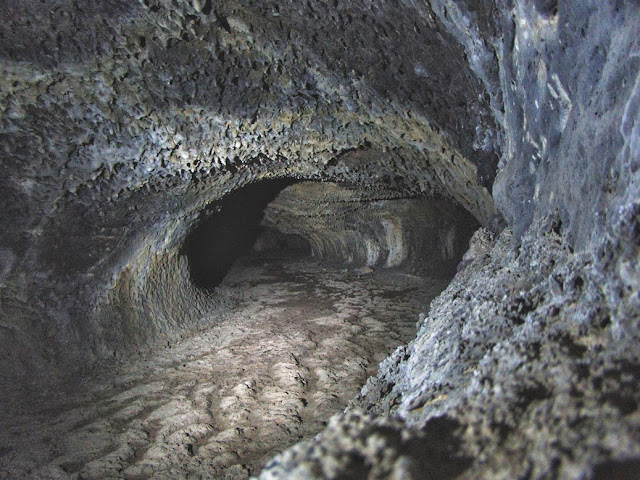 We emerged from Valentine Cave, and returned to our base at the Research Center. Tomorrow we would be going over Medicine Lake Highland. 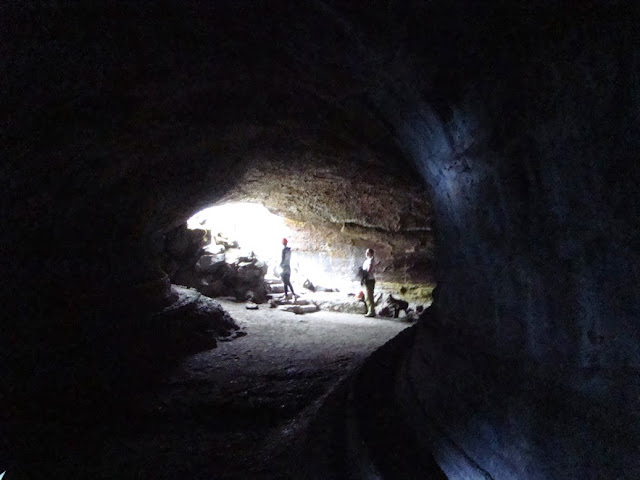