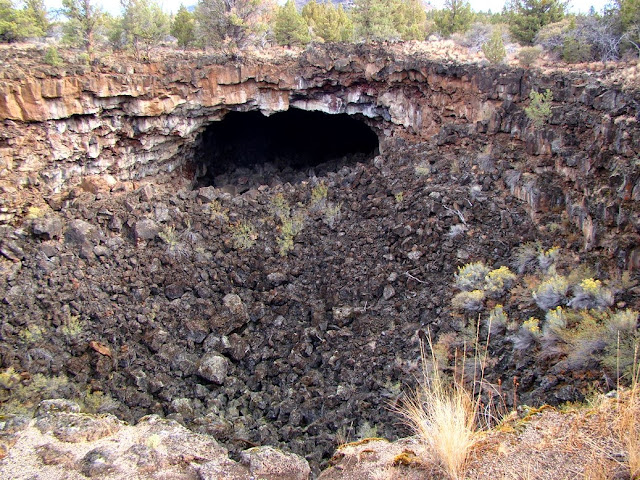 Continuing on with our late September exploration of the California Cascades, we prepared to leave Lava Beds National Monument. The main paved access is from the north at Tulelake, but our interests lay to the south over the top of the biggest volcano in California: Medicine Lake Highland. MLH is a shield shaped edifice, but the history and composition of volcano suggests a complicated history that is quite distinct from shields like those in Hawaii and elsewhere. Lava Beds National Monument covers about 10% of the shield complex on the north flank. We headed up the good gravel road to the highest corner of the park where we could investigate the source of the lava flows and tubes at Mammoth Crater.

Before reaching Mammoth Crater, we stopped at Heppe Caves to catch an unusual sight: water! Very few sources of open water exist at the Lava Beds. Fracturing of the basalt allows water to seep into the ground quickly and no streams or canyons can be seen in the park. At Heppe Cave, a deep layer of ice allows a small pool of water to persist in the lowest part of the huge cavern in most years. Birds and other animals depend on the pool, despite its diminutive size. 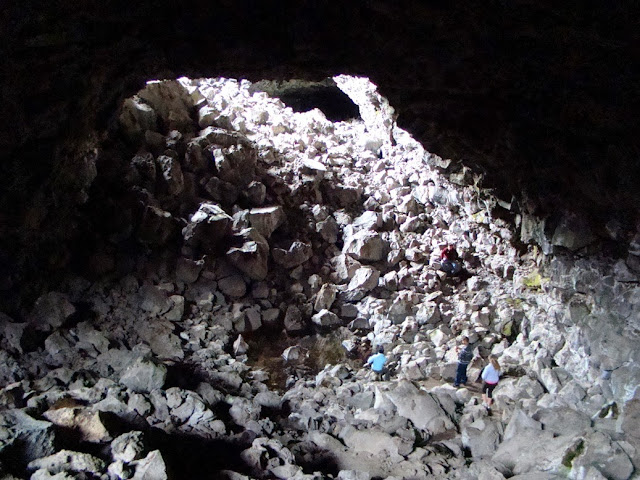 We had gained several hundred feet from the vicinity of the park campground and visitor center, and the cooler wetter climate allowed for the growth of ponderosa pines, and to my surprise, a small aspen grove! These stunted trees are not a common sight in the area. 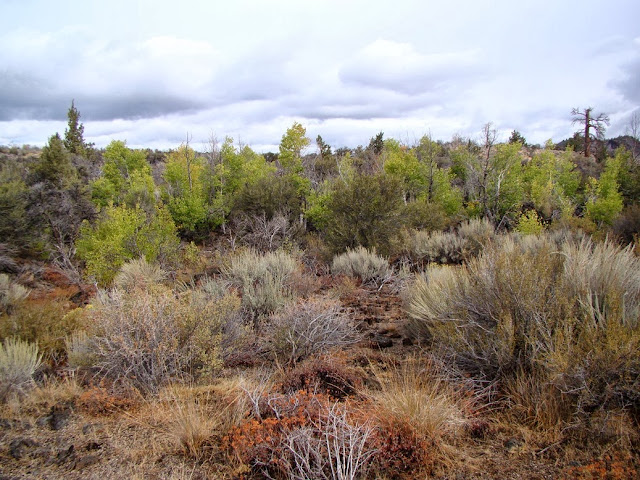 A few hundred yards up the road brought us to Mammoth Crater, the source of the lava flows that cover about 70% of Lava Beds National Monument (and which produced many of the lava tubes). During the eruptions, the crater would have been a lake of molten lava, spilling over in several directions. In the waning phases of the eruption, the lava drained away, leaving a pit a quarter of a mile across and several hundred feet deep. 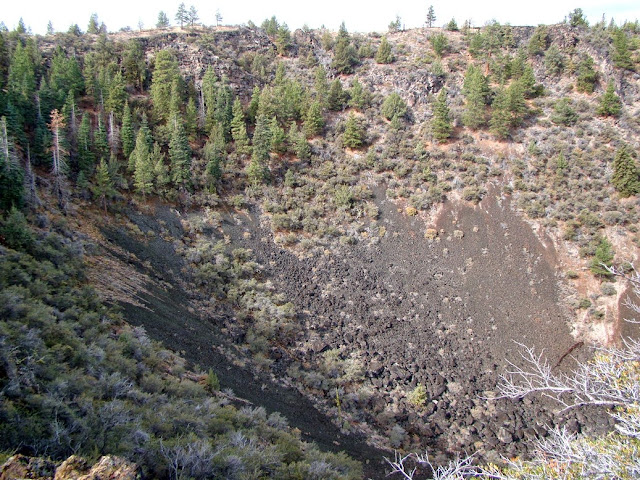 People often think that volcanoes erupt only from their summit, but we were quite a few miles short of the summit of Medicine Lake Highland. The mountain is covered with cinder cones and lava flows that originated from vents on the flanks of the volcano. 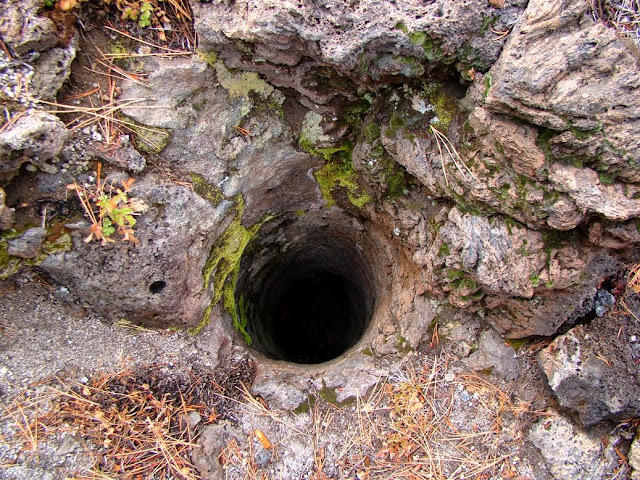 It took a few false starts, but I finally located the obscure track that left the main "highway" and took us to these unusual holes in the lava. Does anyone want to speculate what they might be?? 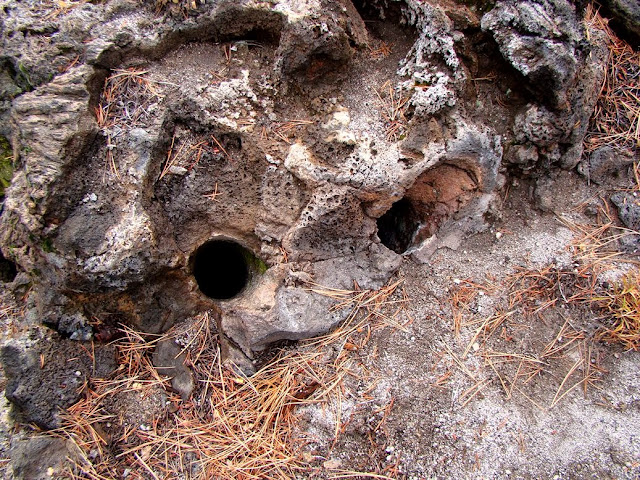 The two holes above joined about two feet down. People can reach in and hold hands underground. A few of the mysterious holes are quite large and deep. The deepest sometimes have snow all summer. 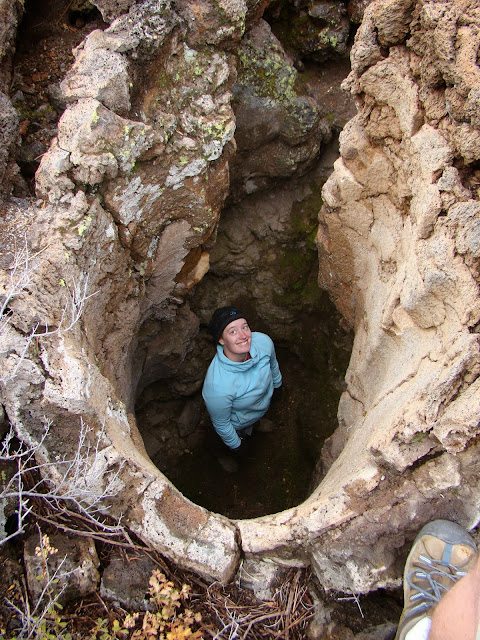 Another one or two miles through the thick forest brought us to the edge of the Medicine Lake Highland caldera. It is about as wide as the Crater Lake, some four or five miles, but beyond the horizontal distance, there are few similarities. Crater Lake has cliffs that drop straight into the lake, where MLH has rounded glaciated knobs and peaks. Crater Lake has a nearly 2,000 foot deep lake, where MLH as a lake that barely makes it past 100 feet in depth. Mt. Mazama, the mountain that existed prior to Crater Lake erupted just 7,000 years ago. The eruptions that produced the caldera on MLH took places tens of thousands of years earlier. 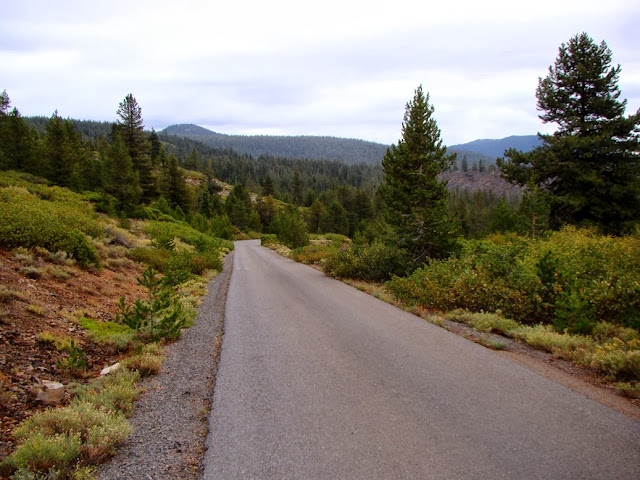 Medicine Lake technically shouldn't exist on a mountain that notoriously sucks up all the water. It seems that the glaciers that formed on the mountaintop produced and scraped up enough clay to seal the bottom of the lake and keep the water from draining away.

It was in the low to mid forties while we stood on the shoreline, and it was drizzling. But the sign said "swimming beach", so my students, who always follow what the signs say... 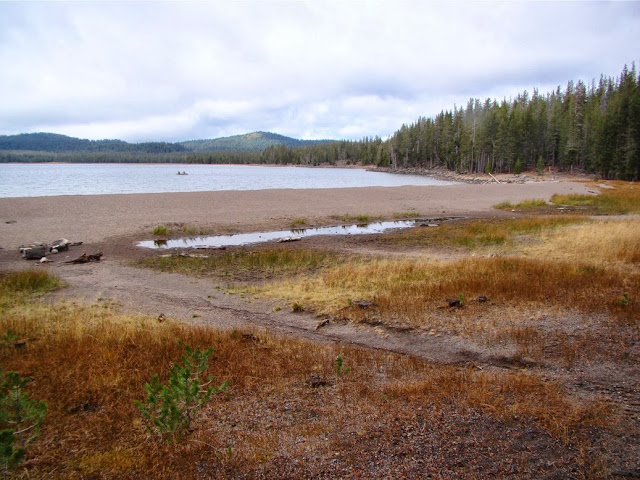 ...did just that: went swimming in a subalpine lake. I make no judgements here, but I had a bone-chilling cold day, and it didn't help to see them swimming away! 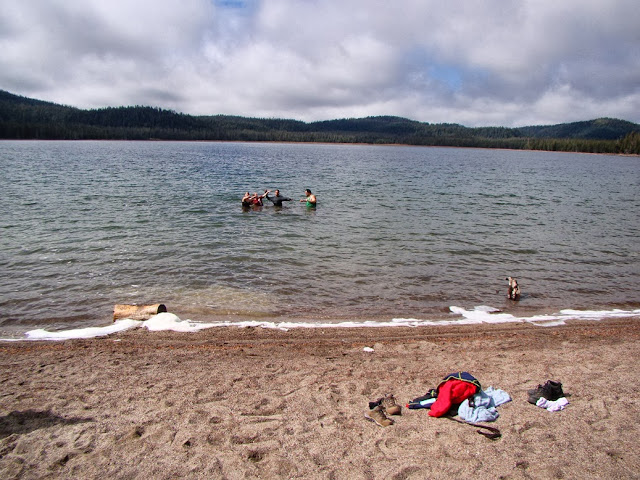 Our next stop: the last thing you would expect to see on a basaltic shield!
Posted by Garry Hayes at 12:58 AM

Betting your mystery holes are tree casts- the fact that two of them join up a couple feet down reinforces my confidence in this guess. Very cool area. I've been enjoying this series, and need to go explore it myself.

I've seen a similar looking hole on the lower slopes of a mountain in the west portion of the San Francisco Peaks Volcanic field, however, if I remember correctly (I was 10 yrs old)I could feel a draft... any ideas there?

Lockwood, you are correct that those are tree molds (congratulations!).

Tom, I understand that there are a fair number of lava tubes to be found in the San Francisco Peaks Volcanic Field, so you very likely saw some of them when you were a kid.

Great info, and a perfect tree mold. I imagine the conditions must be just right, including tree moisture and lava temperature and viscosity.

Tom, it's possible that there is a large lava tube below the hole, allowing air to rise out of the hole; even cracks in the terrain can feed-in the air. There are some lava tubes in Hawai'i where one can look up the tree molds and see daylight.