I've been to Phoenix quite a few times over the years, but somehow until last week had never taken Highway 88 to one of the most familiar sights in Arizona, the Superstition Mountains, home of the fabled Lost (not actually lost) Dutchman (not actually Dutch) Mine. It's probably fair to say that I wasn't trying very hard to find the legendary gold mine. I was having too much fun drinking in the stunning scenery and enjoying the fact that I was standing under a massive caldera ("supervolcano" in popular culture). 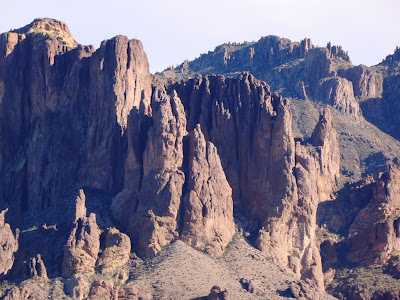 The Superstitions are...abrupt. The sheer cliffs are fascinating; they are composed of volcanic rocks that once made up the core of a vast caldera complex not unlike Yellowstone. Several massive explosions rocked the region, and so much ash was blasted out of the magma chamber that the chamber collapsed in on itself, forming a series of vast 'craters' 10-12 miles across. The calderas of the Superstitions are 15-25 million years older than Yellowstone, are extinct, and have been deeply eroded. The high peaks and spires were once part of the resurgent dome of the caldera. 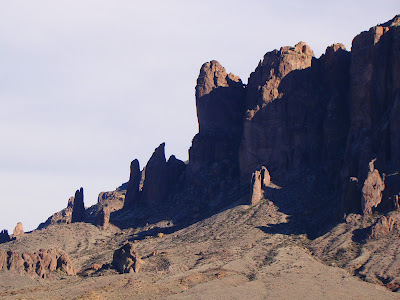 As we drove east we reached the marginal area of the caldera, where vast blocks of tilted ash and tuff are exposed in deep rugged canyons. Highway 88, the Apache Trail, winds upwards from the Phoenix suburbs to a series of three reservoirs that were constructed a century ago to provide dependable water supplies for the vast city (it wasn't enough, though). The reservoir below is Canyon Lake, the lowest of the three. Thick rhyolite flows form the bold cliffs. 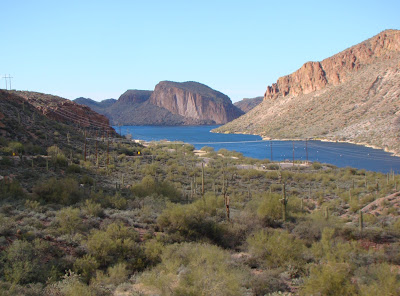 By the time we reached Fish Creek Canyon, the landscape had attained an other-worldly appearance. It seems just like the kind of place that one could hide...a secret gold mine! The Lost Dutchman Mine is the stuff of legend, as in it is probably more legend than fact. The Dutchman wasn't lost for one, and he wasn't a Dutchman, he was German. And as far as lost mines...the old miners left little to chance. There isn't much mineralization in the rhyolite tuff exposures, and since a few gold mines were developed around the margins of the old caldera, I'm willing to bet that the Jacob Waltz's mine was found long ago. But that's taking all the fun out of it, I guess. 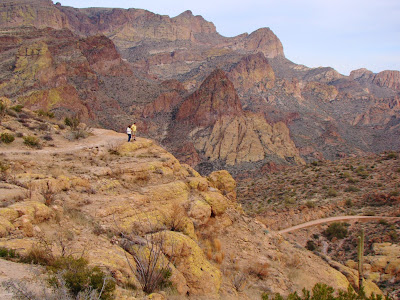 Gold just doesn't grab me the way the imagination does...I stood among these rocks reliving the vast explosions that rocked this place, protected by the safe distance of time. Imagine an explosion so big that it incinerates all life for miles in all directions, a blast 500 times larger than the eruption at Mt. St. Helens in 1980. Imagine watching as the crust gives way and falls for one or two miles into the void. Imagine watching as the dust slowly clears away to a new and vastly changed landscape that will be void of life for years. Imagine as the volcanic activity in the caldera declines and ends, and over millions of years, the rocks are exposed by uplift, mountain-building, and erosion. 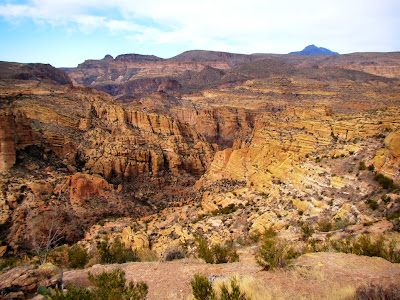 What an incredible place! Thank you dear brother and sis-in-law for the great trip!
Posted by Garry Hayes at 12:39 AM

What a wonderful thing to find upon waking up in Alaska. I am so glad I took you class in Modesto all t19hose years ago.

To think that's almost in my back yard and I've never been there.

Wow. The stories the rocks tell us...