Springtime on the California Prairielands: An Update (and gratuitous baby horsie pictures) 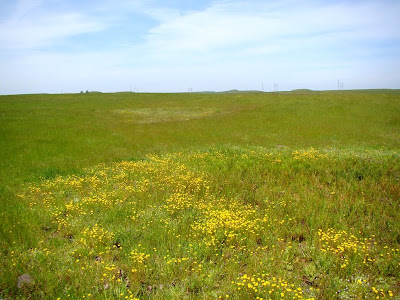 We went out to investigate springtime in the California prairielands, up around the margins of the Central Valley just short of the foothills of the Sierra Nevada. There is a pretty sharp demarcation of spring and summer in this Mediterranean climate; the subtropical belt of high pressure shifts north and shuts off the rains coming out of the north, bringing higher temperatures. All the sudden it is dry and hot for six months or so, almost without exception (the exception being the occasional tatters of a hurricane out of Baja California). In those warm days of springtime there is an explosion of life on the grasslands.

The first picture above shows a vernal pool (or a very good representation of one; there were railroad tracks nearby that may have dammed the swale). Vernal pools develop on the very old alluvial fan surfaces of rivers that flowed from the Sierra during the ice ages. The muddy rivers spread all over the plains, but when the glaciers melted away the rivers started flowing with clear water. The faster moving rivers carved deep channels and narrow floodplains that they have occupied for the last 13,000 years. The surfaces above the floodplains are pockmarked with numerous small basins with small interior drainages (caused by wind deflation or differential settling of the soil). The basins are lined with clay that causes water to pond instead of sinking into the soil. The vernal pools are an ecosystem pretty much unique to the Sierra Nevada foothills.

You can see a fairly sharp delineation in the vegetation at the edges of the pools. The normal grasses don't do as well being inundated with water for a few weeks in the spring, and being rooted in solid clay. A number of plant and animal species have evolved to thrive in the unusual environment. The vernal pools have been decimated by urban and agricultural development; they were a major issue during negotiations for the siting of the University of California Merced campus. The one we looked at was in a pasture and had been heavily trampled by cattle. 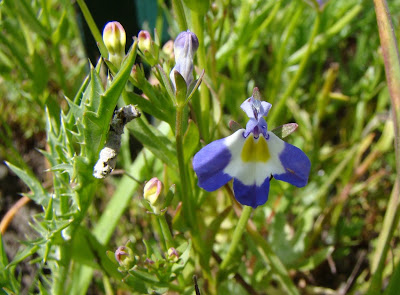 A lot of flowers were visible. It's pretty amazing that I can identify dozens of minerals without breathing too hard, but I have a mental block when it comes to any flower called something other than Poppy or Lupine. I'm guessing that this beautiful small blue, white, and yellow flower is a Bacigalupi's Downingia, based on a highly sophisticated internet picture search (looking at pictures is one of those things I tell my students not to do when identifying minerals; look at the properties, I say). 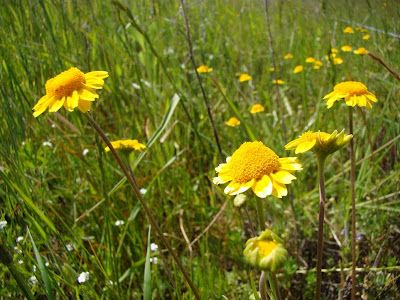 I'm a little more sure that the yellow flowers above are Goldfields (Lasthenia californica). There is also some Owls Clover spread along the Goldfields (below). It took a few moments for me to notice the birds perched on the cobbles among the flowers. I am assuming they are juvenile Western Meadowlarks, but I welcome any corrections! I'm about as good with birds as I am with flowers... 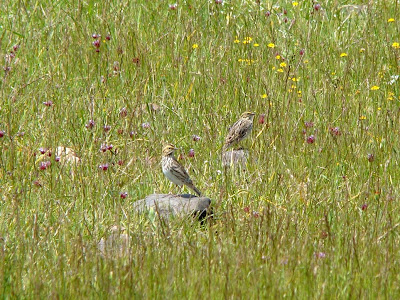 I would also welcome an I.D. of the hawk that was soaring above us. I'm afraid I'm flummoxed by any hawks or eagles that don't have red tails... 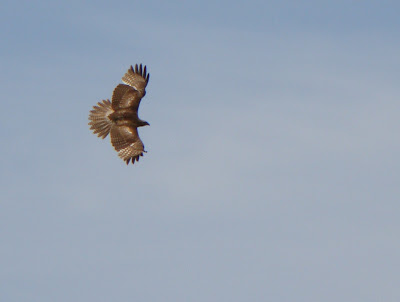 The prairies that I have come to value so much in recent years are clearly under a threat. For decades the lands have been used for grazing (for better or worse), but as more and more of the prime agricultural lands in the valley have been urbanized, the farms are moving towards the less favorable soils of the foothills. I was shocked by the sudden appearance of hundreds of acres of newly plowed and planted orchards and vineyards. 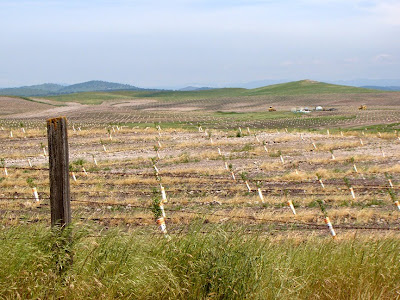 As promised, there were horses roaming the grasslands, and the mares had recently given birth to foals (I say this because I know Diane and Jennifer, my horse-loving friends, will be all up in arms over the title of today's post). There is an interesting geological connection between the horses and the land here. Most of us know that horses arrived in the "New World" with the Spaniards in the 1500's, but fewer know that the horses were coming home after a fashion.
The ground beneath the feet of mare and foal contains the occasional fossil teeth of horses. Some of the fossils date from as recently as 12,000-13,000 years before the present, the time at which the horses became extinct in North America. Other fossils in older rocks beneath are of smaller horses with different teeth and extra toes. The horses evolved in North America, and there have been dozens of species found as fossils (compared to the three that we have today). Some of them migrated over the Bering Land Strait and thrived in Asia, but they eventually went extinct in America, for reasons that are not clear. 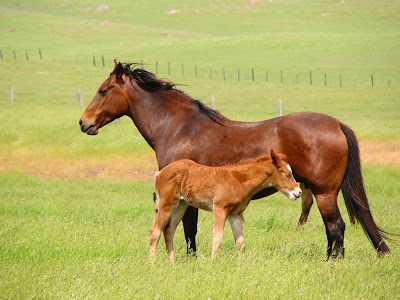 They were a beautiful sight the other day... 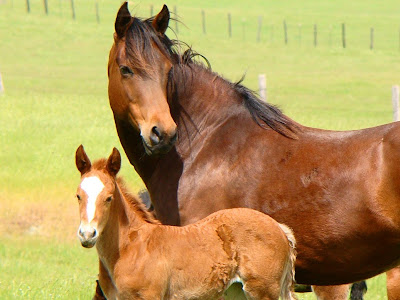 The "hawk" is a vulture.

I gotta disagree on this one. I see lots of vultures and this guy didn't have the white pattern from underneath, and I can't find any vulture pics with the barred pattern on the feathers. The vultures don't splay their tail feathers this way as far as I can tell.

It looks like a juvenile redtail. They don't pick up the tail color until maturity. Definitely not a vulture.

Yep, it looks like a juvenile red-tail to me, as well.

I wonder if my neighborhood kestrel pair is coming back this year? They love the easy-picking pigeons.

Sorry folks -- you all are right about the hawk. I was viewing the blog post via my phone, and the outstretched neck threw me off. Looking at the photo with decent resolution shows my vulture ID to be totally wrong. Thanks for setting me straight!