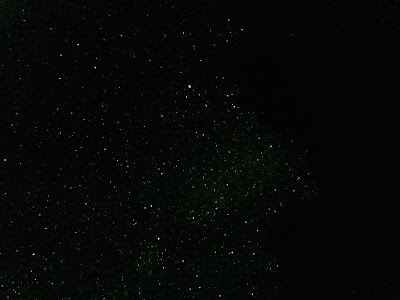 Got a slightly late start on the search for Perseid Meteor Shower, but headed up last night to Pinecrest Lake at just short of 6,000 feet in the central Sierra Nevada of California, set up our folding chairs on the beach to watch the sunset, twilight and deep night. We were breaking the rules by doing our stargazing before midnight, since the best meteors are supposed to come later when the our part of the planet is facing the oncoming chunks of rock. Prior to midnight, the only ones you are supposed to see are catching up to the earth.

Just the same, it was a great night for watching space chunks die a fiery death in the atmosphere. We saw dozens and dozens of them, some seeming to cross the sky, leaving a bright trail in their wake. Sitting and watching for many hours allows for nice long conversations about Life, the Universe and Everything*. So often we think of the sky as a one dimensional canvas, when there is huge disparity in the distances between objects. The planes that fly by are 5 or 6 miles away. The meteors are burning up in the uppermost parts of the atmosphere, maybe 30 miles away. The passing satellites are a hundred or more miles away, and Saturn, which was up in the southern sky last night, is millions upon millions of miles away. The nearest star, Alpha Centauri, is four and a half light years away (light travels 186,000 miles per second; a light year is the distance that light travels in one year). The majority of the visible stars in the cosmos (there are 3,000 or so) are hundreds of light years distant, and the Milky Way Galaxy ranges across tens of thousands of light years. We see only the most local part of our Galaxy, which is 50,000 light years across. The most distant object we can see with our eyes is the Andromeda Galaxy, our "neighboring" galaxy. It is 2 million light years from us.

I was playing with my camera a bit in the darkness. I can leave the shutter open for as much as 30 seconds, which is how I got the photo above. The dark patch on the right is some trees. The Milky Way crosses the picture diagonally. Click on the picture for the larger view.

If you missed the main meteor show these last two nights, it is not too late. There will be an elevated number of shooting stars for a few more days. Just be sure to find a dark place far from city lights. It's a wonderful way to spend an evening!

*with fond wishes to our too quickly departed Douglas Adams and "The Hitchhiker's Guide to the Universe"
Posted by Garry Hayes at 9:50 AM

Professor, that picture is awesome!

Yay for space, now get your head outta of the clouds! lol

A very cool picture! I hadn't even thought of trying anything like that.