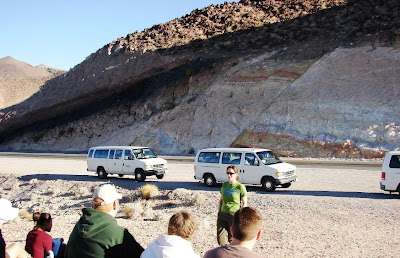 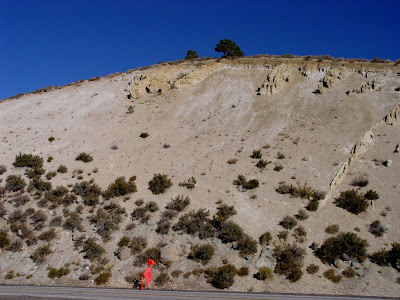 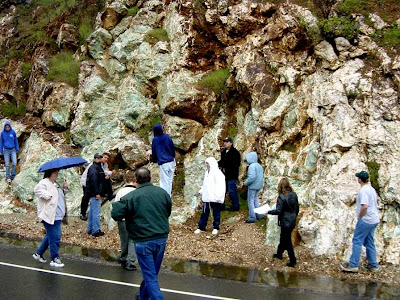 Andrew Alden, as he often is, is right on top of a great idea, a proposal for a Geological Conservancy, modeled along the lines of the well-known Nature Conservancy, and less well-known groups like the Archaeology Conservancy. The proposal is outlined in some detail here, in the SIPES Quarterly. I think the idea is well worth exploring. So many geologically significant outcrops and roadcuts lie outside of national parks or monuments and are constantly threatened with destruction. Roadcuts are especially vulnerable, as road maintenance crews are often ignorant of the importance of the rock faces under their care. I've illustrated three famous sites in California that fall into this category.
The first is the Shoshone Roadcut, often referred to as the Charlie Brown Outcrop (the Charles E. Brown Highway). It illustrates in a wonderful manner the relationships of extensional faults and ash flow tuffs/air fall tuffs in the Basin and Range Province. The surrounding lands are administered by the Bureau of Land Management.

The second picture is the Sherwin Summit roadcut (the "Big Pumice Cut") that settled the question of the age of the Sherwin Glaciation of the Sierra Nevada in relation to the well-dated eruption of the Bishop Tuff. It is a cherished outcrop to legions of California geology students, but at various times road groomers have threatened to cover the outcrop with vegetation, or alter itto a great degree. I believe the land behind the outcrop is managed by the U.S. Forest Service.
The third photo is one of our local special outcrops, where quartz and mariposite veins of California's Mother Lode cross a major highway near Coulterville. The site illustrates the relationships of the ores with the surrounding metamorphic rocks which formed within a subduction zone complex in Mesozoic time. One would need access to an underground mine to have an equivalent view of these complex relationships. The land back of the highway is privately owned.
These kinds of outcrops don't have the natural constituency that places under the protection of the Nature Conservancy often have. They are not always scenic, and they generally don't form a critical habitat for rare plants or animals. But they do offer an invaluable educational experience for learning the basic principles of geology. They should have some form of protection, and a conservancy might be a good approach.
I worry a little about publicizing some of these places, though. Outside Las Vegas, at Frenchman Mountain, the UNLV geology department spent years and lots of money on building some wonderful monuments describing the Great Unconformity between Proterozoic gneisses and Cambrian sandstones. They were vandalized almost right away, and people continue to dump rubbish in the canyon (the site is periously close to a tsunami of housing developments on the northeast side of the city).
What do you think? Is this worth pursuing? How has the ability and resources to administer such a program?
What kinds of places exist in your area that deserve some kind of recognition and protection that they are not receiving now?
Posted by Garry Hayes at 5:57 PM

How would this tie into the proposal for creating a US Geoparks system?

In the UK we have several tiers of site designation. The equivalent to what you are talking about here are designated as RIGS (regionally important geological/geomorphological sites). UK counties have RIGS groups that designate the sites and pass the information on to the county council planning authority. Counties are now being assessed on a series of criteria which includes having management plans for these sites.

RIGS are designated under a variety of criteria, one of which is potential for educational use.

Thanks for picking up on my post yesterday. The difference between the British geoheritage movement and US efforts reflects a deep difference in the citizens. The people of Britain are intensely regional and authochthonous: they have inhabited their landscape for millennia. Americans are allochthonous, invaders of their landscape, and we move around like nomads. We are not indigenous; we destroyed the original natives and lack deep connections to our lands. The British RIGS system is grassroots; the Geological Conservancy will have to be a nonprofit corporation that does a lot of hard work against widespread indifference. But I would join it.

I think it's a great idea, and will have to blog soon about a roadcut that could have been added to this if there had only been a conservancy, but which has recently been destroyed.

Well you will be happy to know Mr. Hayes, that as proprietor of said Coulterville site, I do plan to preserve as much of vein system as possible. Although also have plans to excavate some of the underground mineral deposits, I do so for the preservation of these rare minerals. As Mariposite is an increasingly rare mineral, as most crush it up to extract the gold, my plans are to preserve it with works of art and of course donations to museums of exquisit quality. My reason for this is to avoid future proprietors mining destuction for gold profits. I also plan to keep the surface untouched for previous said comments in your article so students may feel welcome to study and learn at this unique and special place.