A BIG Hole: Getting a Sense of Scale 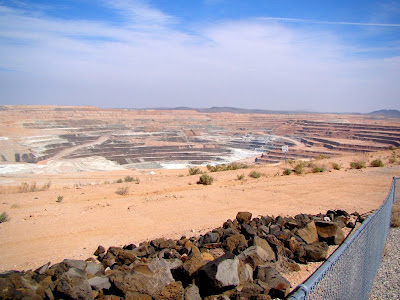 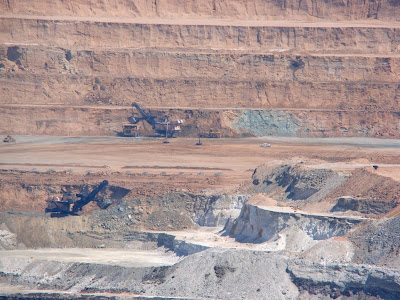 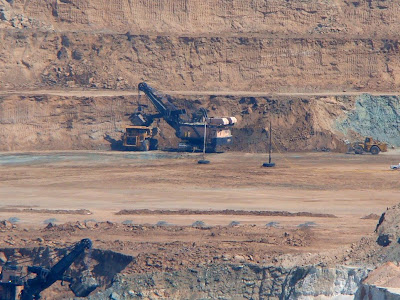 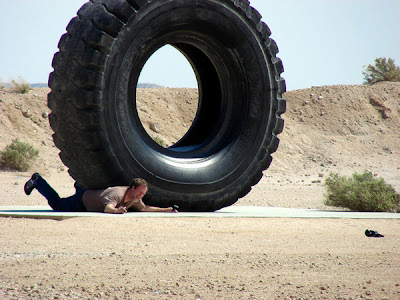 While acknowledging that many geobloggers currently work (or recently worked) in the mining industry (Silver Fox, are you reading?), many of the rest of you may not have a true sense of the scale of effort that goes into the mining of the materials that our civilization must have.
Last month I paid a visit to the Rio Tinto U.S. Borax mine in the Mojave Desert between the towns of Mojave and Barstow on Highway 58. It is a great place to learn about the scale of mining (and play with the zoom function on a new camera!), and to appreciate that the sheer effort involved. I'm not shilling for the company exactly; it's more that I appreciate the effort they have put into visitor education and especially want to note the excellent visitor center they built, perched right on the edge of the big pit.

Borate minerals are not familiar to most people, but they have many critical uses in society as (from the mine website):

Borate minerals never quite had the glamour of gold and silver mining, but they certainly had a colorful history in the Death Valley/Mojave Desert region. First discovered in Death Valley in the late 1800's, the minerals were transported by the iconic 20-mule teams (remember the powdered soap?) to the railroad at Barstow. The discovery of borate minerals in the Calico Mountains a short distance from Barstow caused the shutdown of the DV mines, but Calico played out a few years later. A farmer seeking irrigation water discovered a briny solution of borates at the site of the present-day mine, and mining began in the late 1920's.

About half of the borate minerals mined in the entire world come from the pit at Boron. And it is a big hole, about 1 1/2 miles long, and hundreds of feet deep. The first picture is the view of the pit from the roof of the visitor center. The second is a 15x zoom to a point just to the right of the center of the first picture where the giant shovels and loaders can be seen hard at work (you miners can correct the nomenclature in the comments!). They are big. There is a small pickup truck parked in front of the shovels that can't really be seen in the thumbnails (click on the pictures to enlarge). The third pic is a 30x zoom that shows better the scale of the big machines (the pickup is on the right edge of the photo). In the last picture, Geotripper himself demonstrates the size of the tires on the loaders (photo courtesy of Susan). No one ever explains how they fix flats.
The visitor center is a nice facility, and if you have a class headed to Death Valley or the Eastern Sierra Nevada, you might consider paying them a visit (map and directions here). It of course extols the value of what they do, but it also has some beautiful specimens of the important minerals, like colemanite, kernite, and ulexite (the fibrous tv stone). They also usually have a nice pile of the ore minerals outside that can be collected. And they have a modest gift shop with a mineral t-shirt, and a nicely illustrated periodic table. And toys and books!
Posted by Garry Hayes at 12:05 AM

Yes, reading! Good post. I've not yet managed to have a tour into the pit at the Rio Tinto Borax mine, but they do have an excellent visitor center.