The Merced River of California: A Place for Wildflowers and Landslides (and Yosemite Valley) 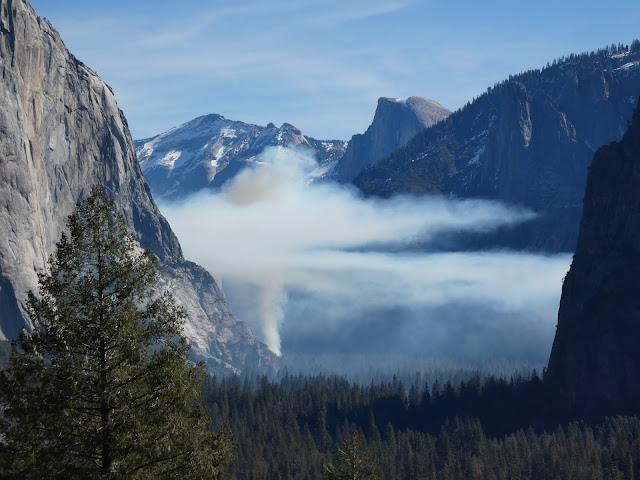 The Merced River is one of California's extraordinary waterways. First and foremost, it is the river that carved Yosemite Valley, which is one of the world's most spectacular valleys. You may be forgiven for thinking that glaciers carved Yosemite Valley, and they certainly had an important role, but it was learned years ago that the heavy-duty work of carving the 3,000-foot-deep gorge was done before the ice ages ever arrived 2 million years ago. The glaciers certainly modified the shape of the valley, but the depth was first achieved by water flowing over stone.
We spent a couple of days in the valley at a time when the crowds are few, the snow is in retreat, but the green of spring is still some weeks away. It was neither winter nor spring, but the waterfalls were full and the birds were becoming more active, and we had a marvelous time. This morning brought a sight we had never seen in dozens of previous visits though: the beginning of a controlled burn.
The native Americans who first lived and hunted in the valley knew the value of fire. They would regularly set fires to the forest and meadows to clear out undergrowth and maintain the extensive meadows on the valley floor. When the park was established in 1890, fire became the enemy and any hint of a fire was quickly put out. As a consequence the meadows shrank from the original 750 acres to less than 100 today. The forest became choked with young trees, and fuel built up on the forest floor. It was a major disaster-in-waiting. In recent years, the park management has sought to return the valley floor to something resembling the environment that existed prior to European colonization. Some of the activity has involved some controversial logging operations, and the controlled burns can interfere with the experience of visitors, but the eventual changes will be a vast improvement over present conditions. 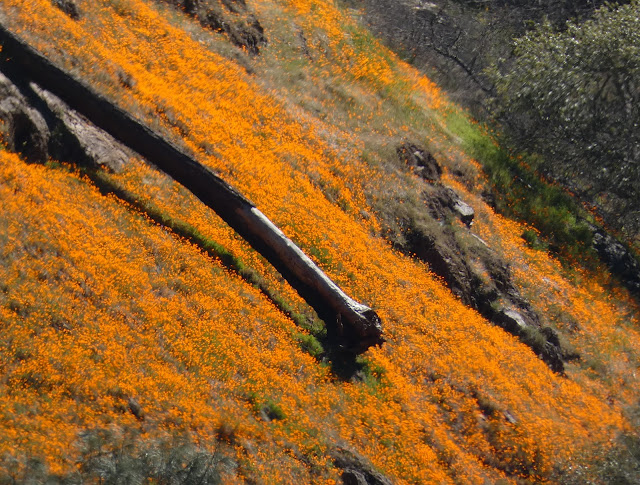 One of our real motivations for the trip actually involved a different part of the Merced River, the deep canyon downstream of Yosemite Valley. The Merced River canyon downstream of the lowest extent of the glaciers is a different place entirely. The vertical walls of glacially-shaped granite give way to a V-shaped river valley covered by vegetation that often obscures an extensive belt of metamorphic rocks that are hundreds of millions years older than the granite intrusions. 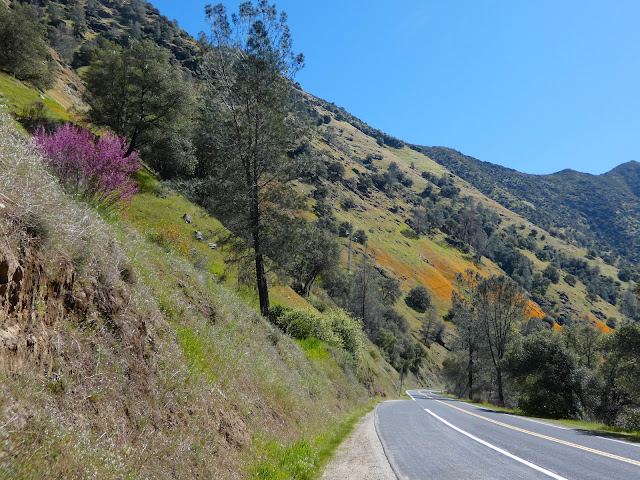 While not as "spectacular" as Yosemite Valley, the canyon is not without scenic wonders. Indeed, for a few weeks in the spring the walls of the canyon can explode into a color palette that puts the gray granite cliffs of Yosemite Valley to shame. Wildflowers like golden poppy, lupine, and fiddleneck and many others can cover the slopes from the river to the canyon rim. 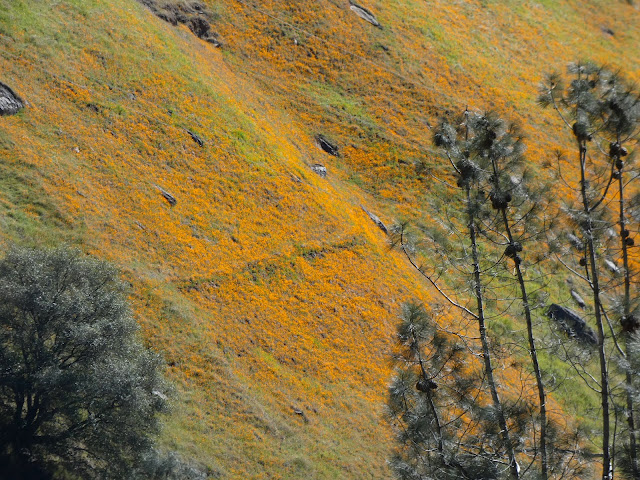 The climax (if it comes; it's been a dry year) lies a few weeks in the future. But here and there, the slopes provided a hint of what is to come. 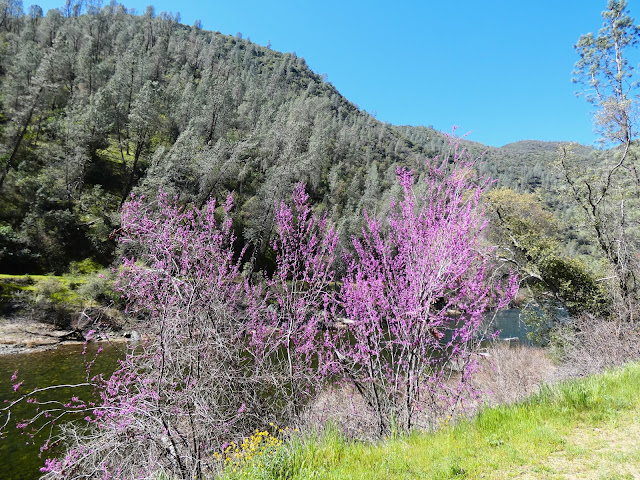 The redbuds are just getting started with their not-red buds. More of a pink/purple shade if you ask me. 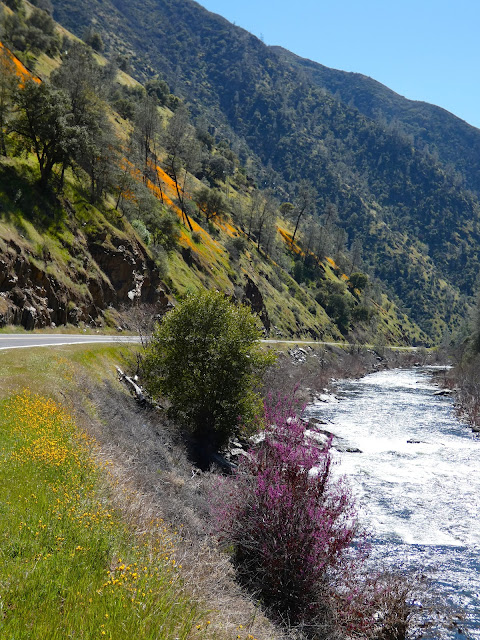 The slopes of the gorge are also an environment adapted to fire. In the Mediterranean climate the winters are cool and wet, and the summers are very hot and dry. Fires have always swept through the gorge, but those of recent years have been particularly intense due to the extended droughts and higher temperatures due to global warming. 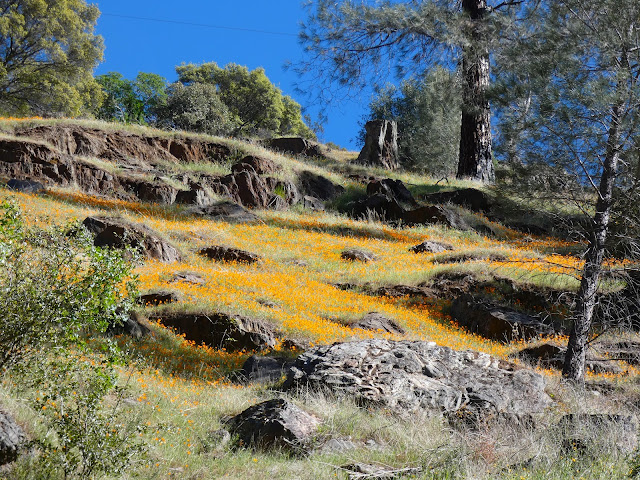 Ultimately fires are a necessary part of the environment, but they can seem particularly tragic in the short-term, especially when people are killed or developments destroyed. The wildflowers play an important role in the recovery of the slopes, as they are pioneer species that help rebuild nutrients in the soils that can assist in the return of the shrublands and forest. The seed may lie in the soil for years before conditions are right for germination, and then the barren slopes come alive with color. 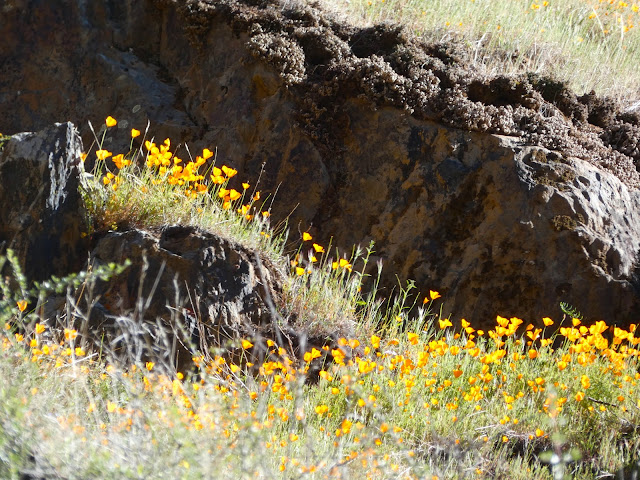 The Golden Poppy is a particularly visible part of the wildflower population. It is California's state flower, and it was a great choice because it thrives in many if not most of California's diverse ecosystems. They're common in the Coast Ranges, the Great Valley, the Sierra Nevada foothills, the volcanic landscapes of the Cascades and Modoc Plateau, the mountains of southern California, and in the Mojave Desert (the Antelope Valley Poppy Reserve is spectacular right now, from what I am hearing). They can also grow on California's strange serpentine soils that most plants cannot tolerate. 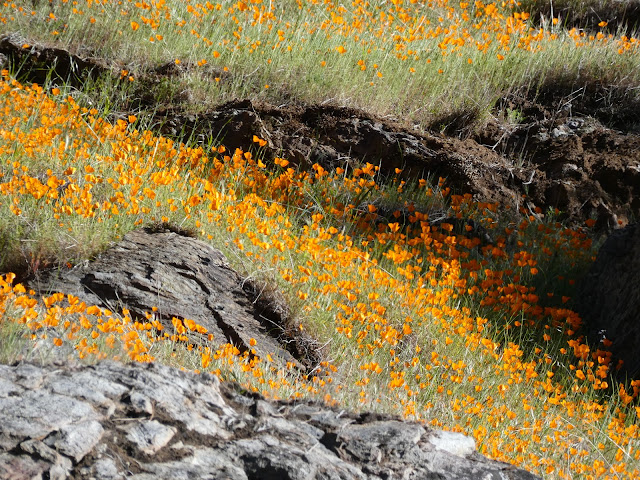 A final sight were looking for was the Ferguson Slide. The slope at this particular turn in the river was always unstable, but in 2006 the entire slope slide downwards and covered the highway with tens of thousands of cubic yards of boulders. Far more debris remains on the slopes above, and for a time there were fears that a truly massive slide could block the river and form a natural dam with a lake several miles long. A number of "fixes" were considered, and in the meantime "temporary" bridges were built to provide one-way access on the busy highway. Temporary in the sense that they have been there for fifteen years and counting. 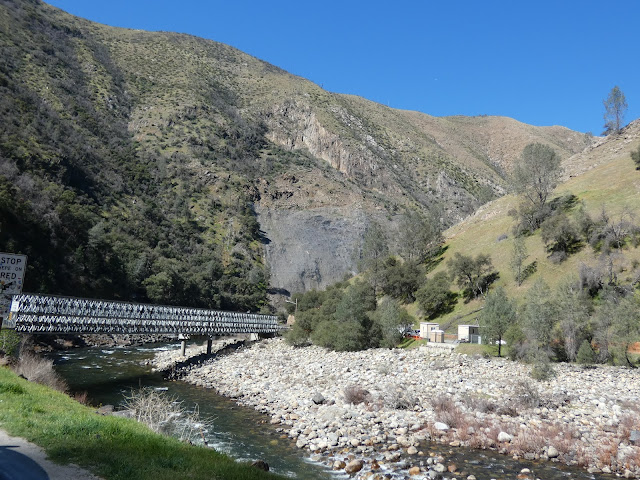 In the end they have decided to build an "avalanche shed", but for rocks instead of snow. The cost is in excess of $180 million (which at the time was about the entire budget for Yosemite National Park). Nature doesn't take kindly to attempts at altering the physics of the slope, and some of the first attempts at stabilizing the upper slopes were laughably sloughed off. There was an earlier coating of the fencing material that was destroyed soon after application. They spent several years carting off nearly 150,000 cubic yards of metamorphic rock and have again tried to fence in the slope. It will be interesting to see what happens when the construction of the shed actually begins. 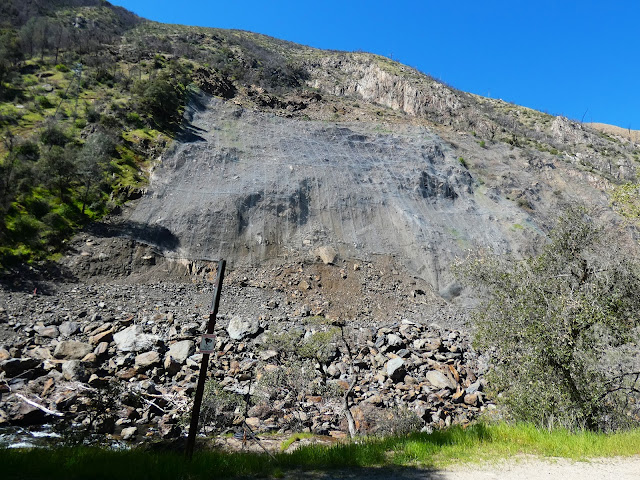 The photo above is the most comprehensive picture I've been able to capture. I made sure to be last in line when the traffic light changed and allowed the line of cars to follow the one-lane road. I lingered a few seconds to get the shot, and hurried along to make sure I didn't run into oncoming traffic on the narrow bridge.
There are many more stories to tell of the Merced River downstream, where it flows through the Mother Lode, the places where it lies trapped in the waters of Lake McClure and Lake McSwain, the dredge pits at Merced Falls, and the slow journey across the floor of the Great Valley where it ends in the San Joaquin River. Those will come another day!
Posted by Garry Hayes at 10:38 PM