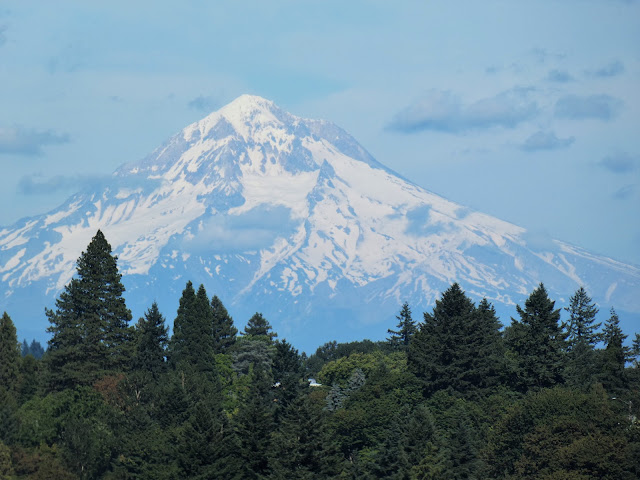 It's not fair, but I don't spend much time in Portland, Oregon. It's not that I don't like Portland, I just don't know it because the logistics of my normal travels rarely allow me to stop there. We are always three or four hours away from our destination and worried about getting through town without getting stopped in one of Portland's legendary traffic jams. But on our way to meet our students in Seattle for our field studies trip to British Columbia we decided to stay in Portland, ostensibly to get nice pictures of Mount Hood. We were moving along Interstate 205 and the traffic wasn't too bad, and saw a wayside viewpoint and pulled off. It was there that I discovered for the first time the work of Tallapus (Coyote) to help the Clackamas people procure a secure food supply of salmon and lamprey: Hyas Tyee Tumwater, otherwise known as Willamette Falls. It's the second largest waterfall in the United States after Niagara. It's 1,500 feet wide, drops around 40 feet, and has a flow that averages about 30,000 cubic feet per second.

What? You've never heard of it? Neither had I. I would have thought that the second largest waterfall in the country would have attracted a bit more attention among travelers, but there are reasons that it is not all that familiar. Some of the reasons go right to the heart of cultural conflicts between European colonizers and the original inhabitants of the region.

The Willamette River is a major tributary to the Columbia, providing around 10-15% of its total flow. Major rivers don't tend to have waterfalls unless unique geological conditions exist. And the story of the Willamette is pretty wild. The river is one of the few north-flowing rivers in the country, following a geologic trough related to the actions of the Cascadia Subduction Zone. In other words, the valley of the Willamette River was not carved by the Willamette River. The valley is weird in some other ways...there are fine silt layers covering much of the valley floor, but scattered here and there are hundreds of gigantic boulders weighing as much as 170 tons. Boulders that came not from the adjacent Coast or Cascades Ranges, but from Montana and Idaho! How can these things be explained? 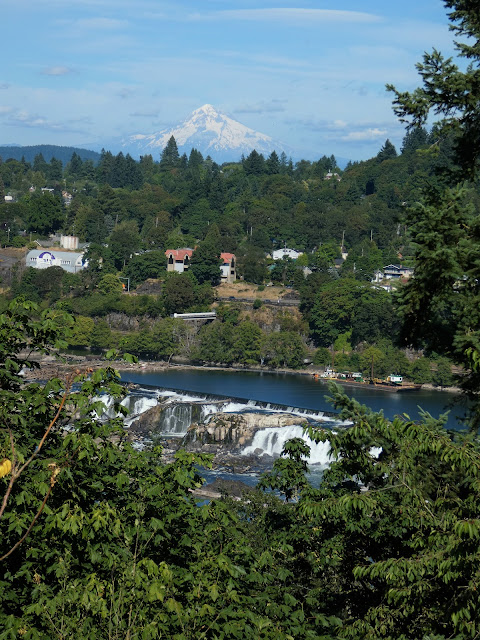 The silt would normally be easy enough to explain. Geologists would assume that such sediments represent floodplain deposits of the Willamette, but they're not. The bedrock floor of the valley beneath the silt is actually composed of layers of basalt lava that erupted all over Washington and Oregon around 16 million years ago. The origin of the silt and the giant boulders are related one of the most incredible geologic events ever to effect Washington and Oregon. Considering the presence of giant volcanoes, gigantic rivers, and major subduction zones and earthquakes, that's saying a lot.

Between 15,000 and 13,000 years ago, the Pleistocene Ice Ages were beginning to wane, but an edge of the gigantic ice sheet that covered most of Canada flowed into Idaho and Montana and blocked of a major river drainage. A massive lake, now called Lake Missoula, formed behind the ice dam. The volume of the lake grew to 500 or 600 cubic miles of water, but then the ice dam destabilized and collapsed, sending a massive flood amounting to about ten times the combined flows of all the rivers on Earth racing across the plains of eastern Washington. The raging waters careened through the Columbia River Gorge at depths of hundreds of feet and the flows backed up into the Willamette River Valley. The muddy waters settled out, forming the silt layers covering the valley floor. The boulders arrived encased in icebergs in the turbulent currents. As the ice melted the boulders dropped out. The ice dam re-formed dozens of times and floods occurred at intervals of 50 or 60 years for around 2,000 years.

As the floodwaters receded the lava flows were exposed and then eroded by the waters draining from the Willamette. The ledges of lava became Willamette Falls. 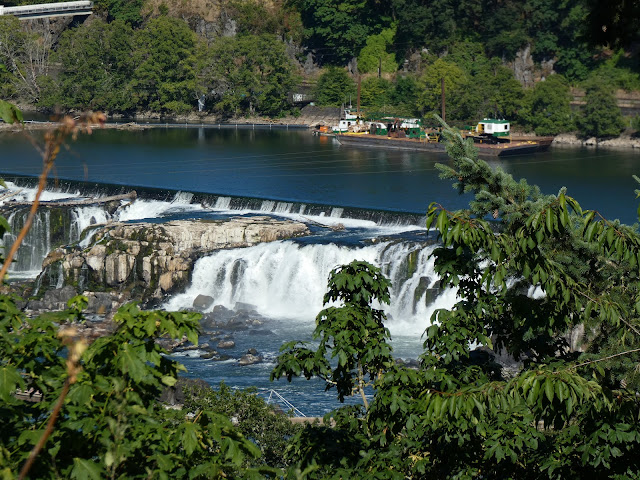 So why isn't the second largest waterfall in the United States not a major national tourist attraction, like Niagara Falls? The basic reason is that although waterfalls are scenic and all, they are also a resource, and if humans of all cultures have anything in common, it is that if a resource is available, it will be utilized. For the Clackamas Chinook people and others in the region, the resource was food. The falls were a chokepoint on the Willamette, a barrier to the movement of salmon and lampreys upstream. Both fish could get past the falls, the salmon by jumping from one particular ledge/pool to another, and the lampreys by using their sucker mouths to climb the wet rocks. But the animals would be concentrated at the falls where they could be easily captured. The falls were considered a gift from Tallapus, and a number of villages were present in the area. The Clackamas had a surplus of salmon that they were able to trade with other tribes in the region.
To American and European colonizers, the falls meant something different: power. The Native Americans had been decimated by European diseases like smallpox even before first contact, so were able to offer little resistance to the sweeping changes the colonizers brought to the waterfall. A flour mill came first in 1844, followed by paper mills beginning in 1866. A system of locks to allow upstream ship traffic was constructed in 1873. Hydroelectric generating stations arrived in 1888 and 1895. The developments destroyed the salmon runs, so a rudimentary fish ladder was blown out of the basalt in 1882. A more modern fish ladder was constructed in 1971. The flour mill was removed to make room for the paper mills, which operated until 2011. The ship locks were shut down in 2015. Only one of the power stations remains. In other words, the Willamette Falls today look like a nearly abandoned factory slum, which it technically is.

Most of these abuses are not visible from the overlook at Interstate 205. One wishes that with most of the ugly factories abandoned that the river and falls might be returned to a state resembling the primeval river. There are plans to "develop" the site with river walks and interpretive signs, but of course in the current culture of capitalism, also businesses and tourist attractions. It its own way tourism is a resource like any other, a commodity to be exploited.

In the end, I hope the stories will remain. The story of how Tallapus scooped out part of the river to slow down the migration of the salmon and lampreys so the people could catch some of them. And the story of how awesome, almost incomprehensive forces were unleashed by nature to form the falls through lava flows, glaciers, and gigantic floods.