Travels in Cascadia: Burial Mounds of the Kings of the Rohirrim? The Mima Mounds of Washington 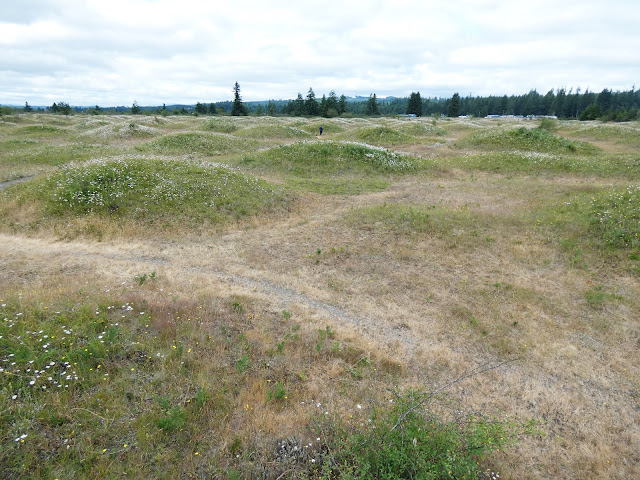 NOTE: If this post seems familiar, it should be. I posted it just a month ago. I'm re-posting (with minor changes) to place it in the proper order of the current blog series.

One of the vivid images in my mind of the Lord of the Rings Trilogy was the resting place of the Kings of Rohan. They were buried in mounds, and the mounds were covered by the white flowers called Simbelmynë. I couldn't help think of the Kings of the Rohirrim when we arrived at the Mima Mounds Natural Area Preserve near Tumwater, Washington. 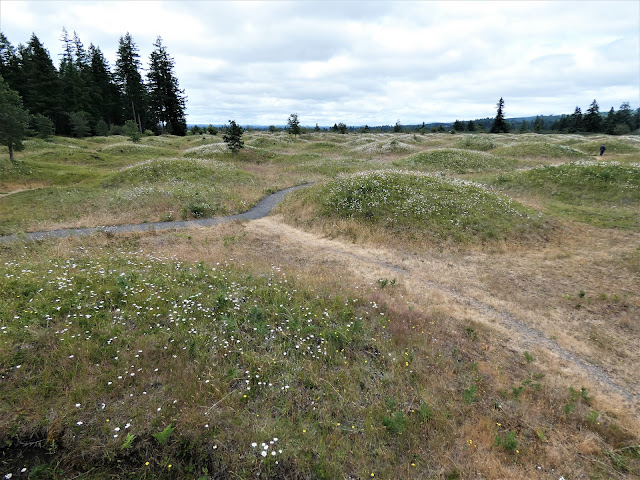 When European settlers reached the region, some of them thought that these unusual features were indeed Native American burial mounds. But when no further evidence could be found supporting the idea, they looked for other explanations. And didn't find many... 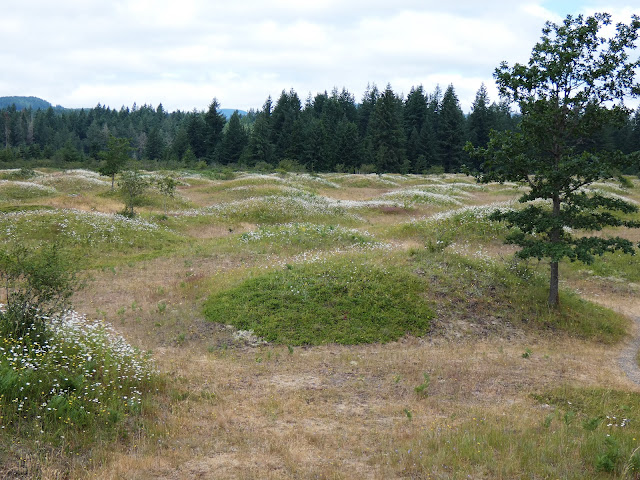 The things we don't know about our planet are, well, not known. But geologists are the first to say that the unknowns are legion. Many aspects of Earth are still a mystery. Lots of the mysteries lie hidden deep in the crust and mantle, or on the deepest parts of the ocean basins. But some mysteries are still right there in front of us, and mima mounds are one of them.

Mounded topography forms in a number of places across the central and western United States in a number of different geological environments. Although they share some similarities, it is possible that they originate from several different processes. Ideas range from the mundane to the exotic (and unlikely). Most of them occur when a fairly thin layer of soil covers a harder layer or substrate underneath. They tend to be just a few feet high, and occur in concentrations of 8-10 per acre. 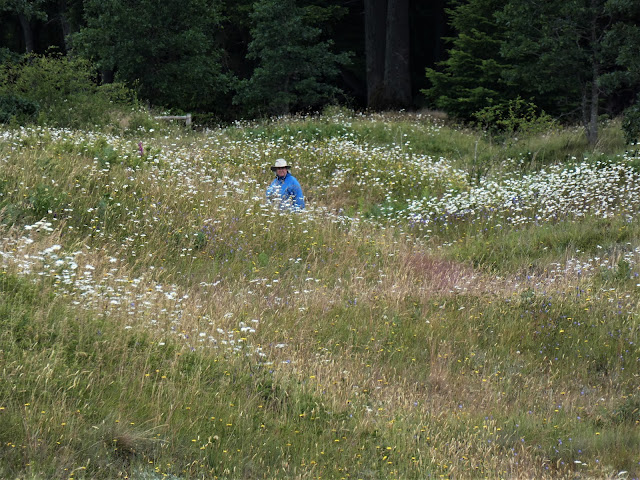 The mima mounds of Washington formed at the edge of the massive ice sheet that covered most of Canada and parts of Washington as recently as 12,000 years, and so some hypotheses involve glacial meltwater, or subsurface glacial activity. Some suggest erosion of sediment from around concentrations of vegetation. More esoteric explanations involve disturbances from the vibration patterns of major earthquakes.

Occam's Razor states that among competing hypotheses, the ones that make the fewest assumptions are more likely to be correct (sometimes inaccurately described as the simplest answer is always the best). One of the more reasonable explanations for the mounds may be simply rodent activity. When pocket gophers dug into the shallow soils and encountered harder sediments, they tended to build up the mounds, and the process continued through thousands of generations. Maybe. And maybe it's aliens...
In any case, it's a fascinating place to visit. Several trails wind their way through the mounds, and there is an interpretive kiosk with a viewing platform. It is a beautiful prairie setting, with the tweeting of birds, the buzzing of insects...and an air of mystery. 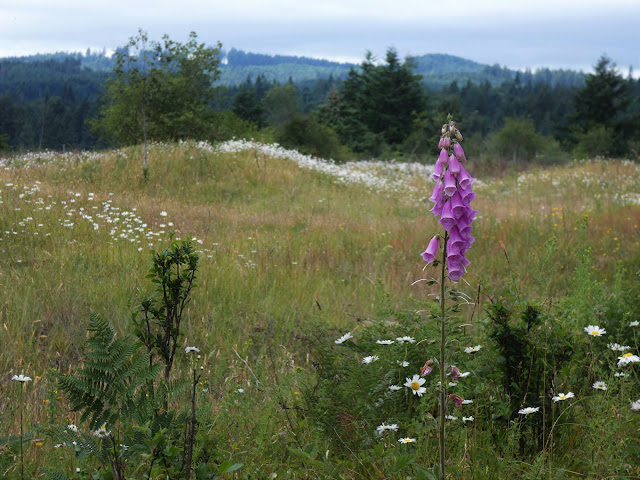 I've been to the mounds in Washington twice, and the first time was in the dead of winter when no flowers were present. This time it was summer and it was a thrill to see the fields of flowers, bringing to mind the tombs of kings and the Simbelmynë. 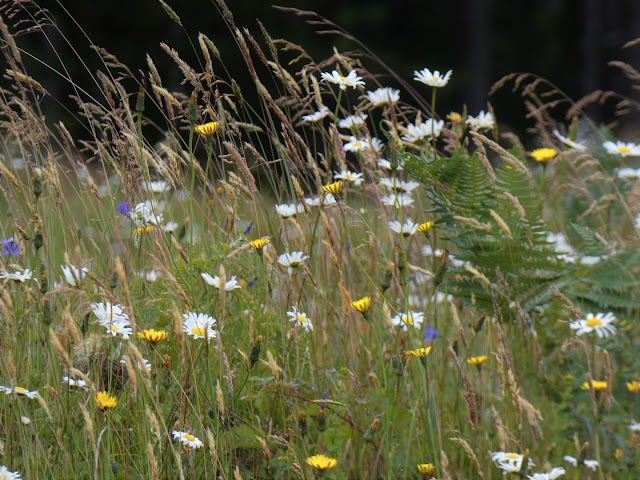 If you want to visit the site, here are the directions from the park website:

From southbound or northbound Interstate 5, take Exit 95 and turn west on Highway 121 (Maytown Road SW) toward Littlerock. In Littlerock, continue west (forward past the school, past the intersection with Littlerock Road that curves south, and past the mini mart/gas station on the right) onto 128th Avenue. Travel about 0.8 mile where 128th Avenue ends at a 'T.' on top of the hill. Turn right onto Waddell Creek Road and travel about 1 mile. The entrance to Mima Mounds Natural Area Preserve will be on the left. A Washington State Discover Pass is required for parking at this site. 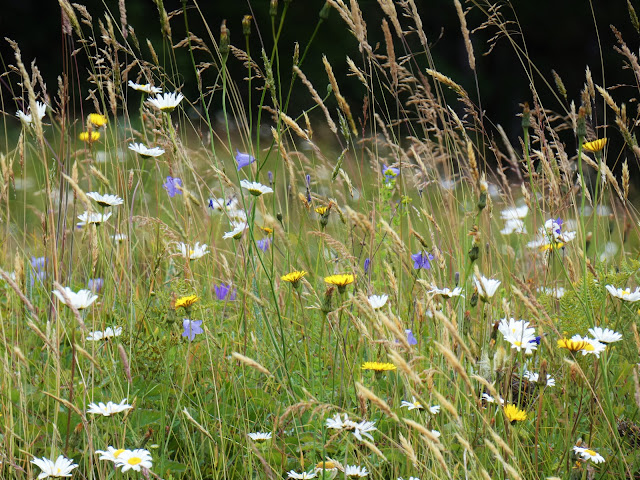 Postscript: Dustin commented when I posted the original last month, and these ideas have some merit...

Great features! My guess is that the mounds developed when glacial outflow preferentially eroded the fissures created by patterned-ground permafrost in a periglacial environment. This photo shows mounds forming from patterned ground in Alaska.

In the case of the Mima mounds, if patterned ground was originally present with hard and frozen polygon centers, and margins/edges that were soft and thawed, then water flowing over the patterned ground would preferentially erode the fissures, while being less destructive to the polygon cores. Sustained flows would likely erode all evidence of patterned ground, but the Mima mounds were likely formed from ephemeral flow events associated with glacial melt near the ice sheet margins. This type of environment is suggested by the kettle lakes visible in the upper right of your airphoto, and the mounds being distributed amongst relict braided river patterns.
Posted by Garry Hayes at 9:53 PM