Fire in the Sky: The Perspective That Comes When Time is Running Out 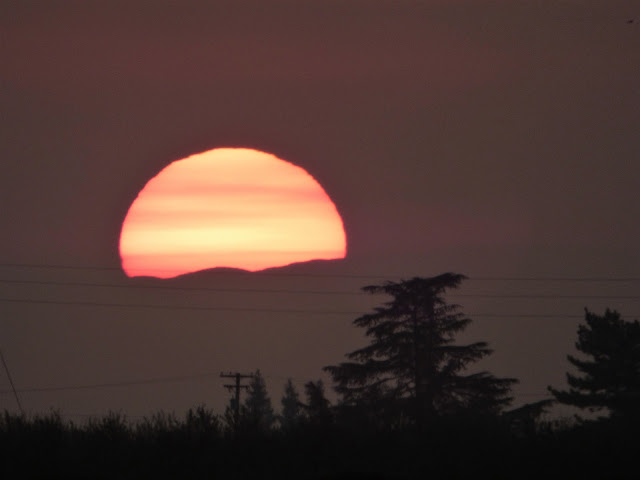 It was nothing more than the evening commute to school to give a final examination in my Earth Science course. It was a bit after 4 PM and the sun was settling into the horizon, and the spectacle of it all caused me to pull to the side of the road. I have a habit of taking my camera with me everywhere, so I was able to snap a few pictures of the seemingly striped orb. It was also a moment of reflection.

It was a beautiful sight, but it was tinged with great sadness. The color is coming from the homes and dreams of a lot of people in Southern California who are battling a devastating wildfire that has consumed nearly 250,000 acres (that's nearly 400 square miles). At least 700 homes have been lost already. The flames, driven by a severe Santa Ana Wind event, produced volcano-like plumes of smoke and ash that flowed out to sea and then up the coast of Central and Northern California. There is a ridge of high pressure out there, parked over an exceedingly warm Pacific Ocean that is diverting the normal late fall and early winter rainstorms far to the north. There has been no precipitation in our area for weeks, and none in the long-range forecast. The fires in SoCal come on the heels of the even more devastating fires that swept through the wine country a few weeks back, destroying thousands of homes, and killing several dozen people. The drought and the attendant wildfire intensity is seemingly back after a brief one year respite.

It's hard to convince skeptics of climate change if they are not living in the path of the worst effects. But the effects are extending to more and more people as the decades slip by. There were warnings of mega-droughts and longer fire seasons in the west and southwest years ago. There were predictions of hurricanes amped up by warmer ocean water. There were the obvious forecasts of sea-level rise that are now having a visible impact in coastal cities like Miami, Florida and Venice, Italy. And the glaciers and icecaps are continuing to melt away as they were decades ago, and at an accelerating pace. Unprecedented record-setting heatwaves are becoming distressingly commonplace. The evidence of global climate change is becoming ever more apparent to people around the world, and to their leaders as well, all of whom are signatories to the Paris Climate Accords. Every country, that is, except one. The United States of America.

Many people, probably most, don't consider science when they stand in the voting booth and make their choices. A distressing number of people end up never standing in the booth for one reason or another, but too often because of voter suppression activity. The rest are thinking about the "issues" like standing for national anthems (or kneeling), or building walls, or any one of dozens of temporary controversies (look up Willie Horton ads some day). Perhaps most think about misogyny, racism, taxes, or the economy. These things are important, of course, because these are issues of life, and quality of life. But few think about science, the environment, and the long term effects of what we are doing with the choices that we make. In the long run, these are some of the most important things that impact our lives. But our political representatives can only think in time frames of two, four, and six years, the length of their terms in office. We need to hold their feet to the fire (figuratively) to make choices that benefit us all long after their terms have ended.

Perhaps the most important game in town right now is education. It is only through education that people can make the right choices that will secure their future and the future of their children and their grandchildren. An educated populace is not going to be hoodwinked and cheated by charlatans and con-men running for public office. And education never stops in high school or college. It is a life-long skill, especially now when the entire breadth and depth of human knowledge can be accessed by the phone in your pocket. Take advantage of it. 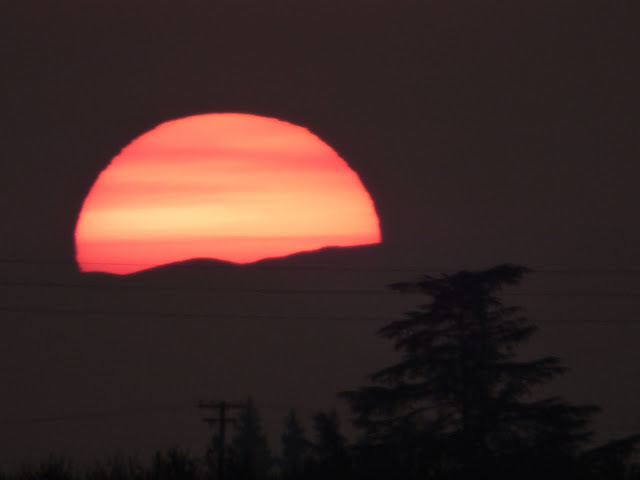 The sun doesn't seem to move all that fast when it is high in the sky and hours are left in the day. But when the end of the day is near, and one has the perspective of the horizon, the darkness comes quickly. We are being given that "gift" (or warning, if you wish) of perspective concerning climate change. We've been given the predictions and projections from twenty and thirty years ago, with results that are sometimes off by a bit, but almost invariably worse than expected. I don't know when it is too late; it is different for different groups of people and different biomes and ecosystems. But we have been warned.

In any case, that's what I thought about while the sun sank below the horizon and the darkness set in.
Posted by Garry Hayes at 8:00 PM