Travels in the Northern Hinterlands of California 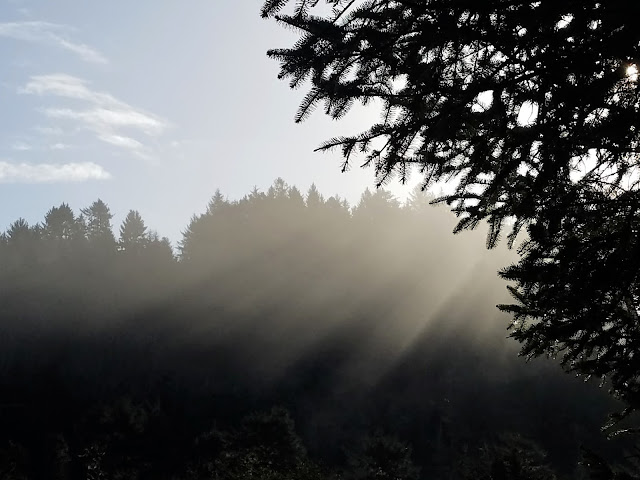 The holiday season often means the special moments with family and decorations and Santa Claus, but when your family is spread out in a thin line running the entire length of the west coast of the United States, it also means some time on the road. We have had a long way to go in the past few days, but we stopped a few times and took in some of the extraordinary geography of California's isolated north coast. 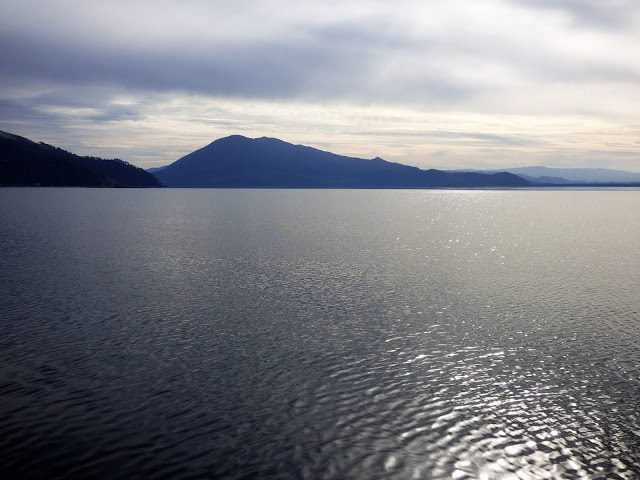 Getting to the coast from our home in the Great Valley requires crossing the Coast Ranges first. Our preferred route is through the Clear Lake region. Clear Lake itself is a huge natural lake formed by lava flows and landslides that altered and blocked water course flowing into the Russian River. It covers 68 square miles, which makes it the largest natural lake entirely within California (Lake Tahoe is larger, but is partly in Nevada. The prominent peak on the lakeshore (above) is Mt. Konocti (4,721'), which is a potentially active volcano with eruptions as recent as 10,000 years ago. Hot springs and earthquakes attest to the continued existence of magma chambers in the region. 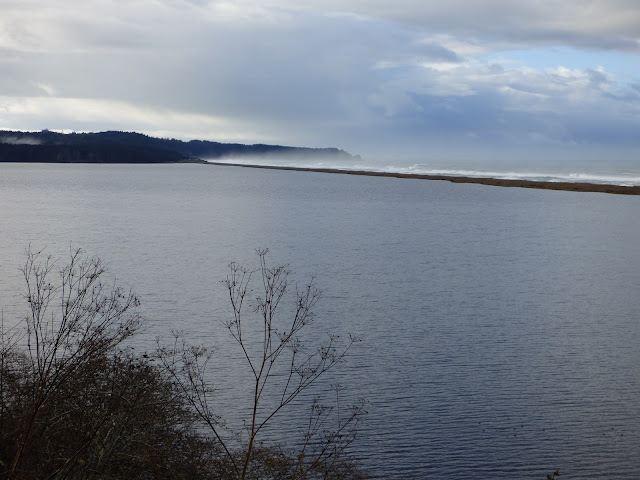 We reached the coast in the vicinity of Eureka and Arcata and headed north on Highway 101. We soon passed an incredible sight at Humboldt Lagoons State Park. The growth of hooked spits (long linear sand bars) has led to the formation of a series of baymouth bars which isolate the coastal estuaries from the open sea (there are no big rivers in the immediate area to flush out the sand. The bars are only a few hundred feet wide at most and one extends for three miles. There are a total of four lagoons. 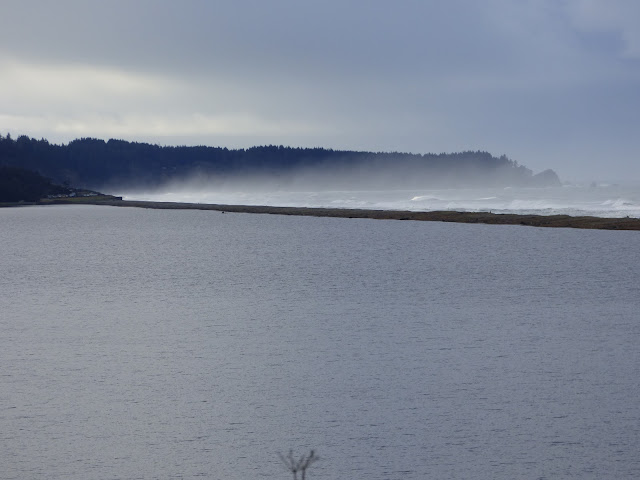 The lagoons are a unique ecosystem. Because they are breached only on an irregular basis, salmon and other creatures have adapted in interesting ways. Young salmon migrate downstream to find their way to the sea blocked. They live in the lagoons for extra months or even years, gaining size that may enhance their chances of survival in the open sea. On the other hand, breeding salmon may have difficulty getting into the estuaries. 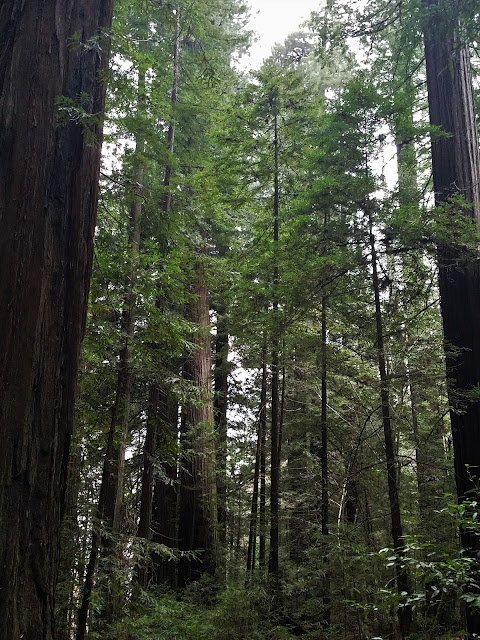 Soon we were deep into the Redwood forest. The Coast Redwood only grows along the coast of California and in a tiny part of southern Oregon. They are extraordinarily large with the giants reaching heights of nearly 400 feet. They are related to the Sequoias of the Sierra Nevada, and the Dawn Redwood of China (and ornamental landscapes). The Redwoods are the tallest, but the Sequoias have the greater bulk. The Redwoods make for excellent lumber, while the Sequoias do not. It was almost their undoing. 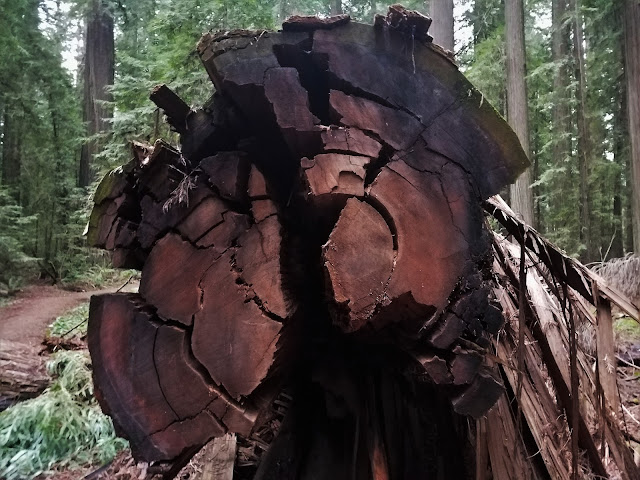 The Redwoods once existed as an unbroken forest from the Big Sur Coast to Oregon, topping out at some 2 million acres. More than 90% of the old-growth forests were cut down during the last century, and it was only through the foresight of the founders of Save the Redwoods and other organizations that old-growth groves were purchased and given over to the state of California for permanent protection from logging. As recognition grew of the need to preserve not just patches but entire ecosystems, Redwood National Park was established in 1968 and expanded in 1978. It protects an entire watershed (Redwood Creek) that has old-growth forests as well as second-growth tracts. 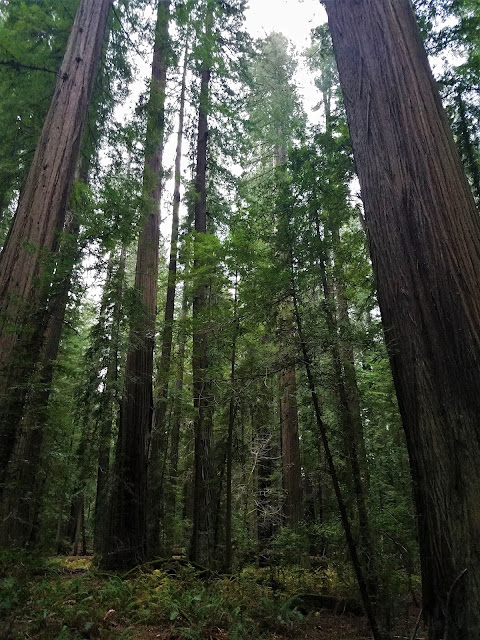 We didn't have very much time, but we stopped at Humboldt Redwoods State Park, and at the visitor center for Redwood National Park as we passed through. We hated to move on, but a storm was coming and our families were awaiting our arrival. One could spend weeks among these beautiful trees and the stunning coastline. Which we intend to do as soon as possible. 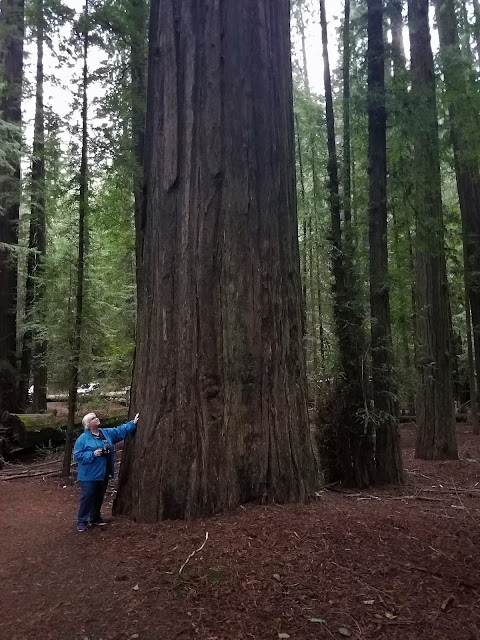