The Abandoned Lands...A Journey Through the Colorado Plateau: A day in the canyonlands, part 4

The nice thing about blogging is that one gets to set one's own rules and deadlines. I'm easily distracted and can drift from one project to another, and then drift back. So it is with this project on the Abandoned Lands. Off and on for the last five months we have been examining our summer journey through the Colorado Plateau, and we've reached the 12th day of a 16 day trip. But what a day this was! It started with a fiery sunrise, included a hike to see the largest arch in the world, and added a tour of an Indiana Jones movie set ("that cross belongs in a museum!"), and it was barely past noon... 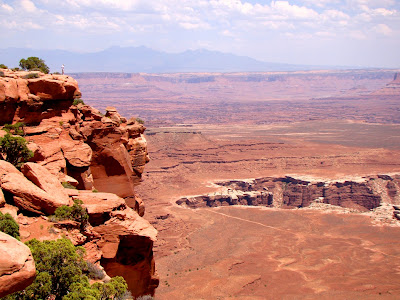 And now we were headed into the canyon lands, preserved as Canyonlands National Park and Dead Horse Point State Park. This province of the Colorado Plateau has been deeply incised by the Green and Colorado Rivers, enough to expose upper Paleozoic sedimentary rocks. We hadn't seen rocks that old since we left the Grand Canyon ten days earlier. The late Paleozoic rocks at Grand Canyon had been a mixture of marine and terrestrial rocks, but in Canyonlands, the bright red colors told us the rocks were almost exclusively terrestrial. 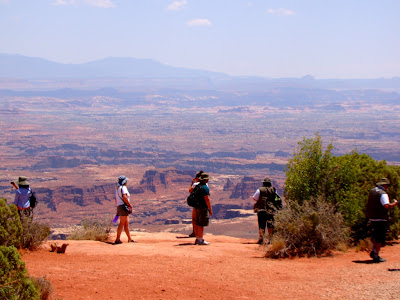 Except for one thin bit of beach sand ...a layer called the White Rim Sandstone (below). From our perch at Grandview Point, we were looking at the last advance of a seashore in Permian time, some 270 million years ago. It would be tens of millions of years before seas would once again cover the region.

This is a vast empty quarter; it's hard to imagine making any kind of living here, but people migrated into the region, and most abandoned it soon after. The Native Americans made the maybe the most successful effort, with evidence of Archaic peoples arriving thousands of years ago. The Ancestral Pueblo people occupied the region from 200 BCE, and another group, the Fremont, arrived around 800 CE. Both groups abandoned these lands before 1300. It was several hundred years before others reoccupied the land, with the arrival of the Utes, the Paiutes, and the Navajo. The Spaniards largely ignored the region, but outlaws in the late 1800s utilized the intricate canyons as hideouts. 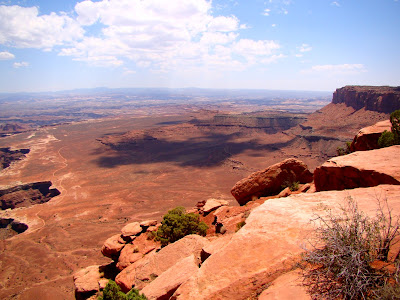 One after another, others moved through this landscape: ranchers, uranium miners, trappers, gold miners, oil drillers. And then they moved on. In the early 1960s, riches of a different kind were recognized: the scenic nature of the canyons. In 1964, Canyonlands became a national park.

In contrast to the vast expanse of Canyonlands, Dead Horse Point is a miniscule property of just over 5,000 acres (8 square miles). But what a spot! It is perched on the edge of a 2,000 feet cliff overlooking the Colorado River and the eastern side of Canyonlands National Park. 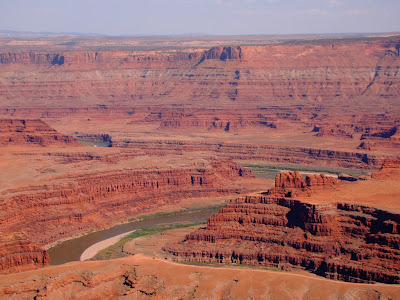 There was an interesting spider in the picnic area, too! Anyone know what kind it is? 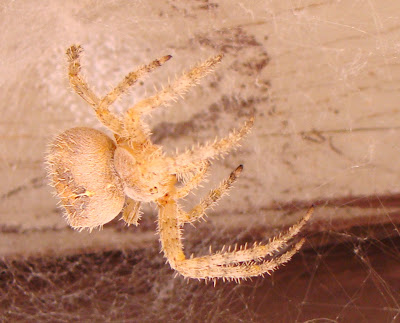 The shadows were finally starting to lengthen, but our day wasn't yet done. Most of the students made the 1.5 mile hike to Delicate Arch to watch the sunset. I headed up to camp for a different walk... 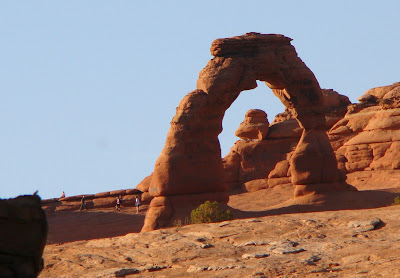 Oh, delightful! I've only been there once (both Dead Horse Point SP and Canyonlands NP), and that was over 10 years ago, but I JUST talked about an eagle sighting I had at Dead Horse Point at a family thanksgiving gathering THIS last WEEKEND.

What a spectacular place. So glad you and your class went, and so glad you shared this. Apparently I need to plan to return. =) I'm headed to Big Bend NP in February--have you been there?

Thank you for returning to Canyonlands. This is one of my favorite places also. Looking forward to more posts!

Hi Biobabbler. I haven't been to Big Bend yet; one of my colleagues does a dinosaur dig there most years, though.

Hey Garry great Araneus spider pic... These guys are in the same family with orb weavers and can vary wildly in appearance based on the geography they live in, I love the spikey hairs on this one =0) Great pics of the landscape, always enjoy your posts!