The Rigors of the Routine Life II: On Other Hand, Your Brain Will Shrivel Up... 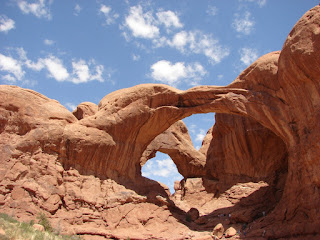 A couple of seemingly unrelated things caught my eye yesterday. First, it is the 30th anniversary of the release of my favorite film of all time: Indiana Jones and the Raiders of the Lost Ark. The second was an 1888 book on geology and geography (Eclectic Physical Geography by Russell Hinman) that I found in my bookshelves while looking for something else (Thanks Jim, for the gift!). The third thing that caught my eye was the flower display in my yard, which I wrote about in the previous post.

A routine life may be comfortable and predictable, but routine doesn't allow much room for growth and discovery. I have lived in one place for more than twenty years (very routine!), and there are places that I haunt with regularity (also routine), and I will sometimes sit in these restaurants or wander through the aisles of the stores and just listen to the ebb and flow of noise and actions of the staff. They never change; the players change, the owners change, but the essential activity never does. To what purpose? Usually to make money, to take home a paycheck. But through all the transactions, both economic and personal, little is learned, little is discovered, and no one gains anything more than a full stomach or a few bags of groceries (though these are very nice things to have). The workplace has a purpose, but for the most part that purpose has little to do with expanding the minds of those involved. There isn't any room, or desire, for human discovery. In the most cynical sense, we are supposed to stick to our routine, do our jobs, not cause trouble, and buy things.

One of the shocking lines in the movie "The Truman Show" was a teacher telling a young Truman "Oh, you're too late! There's nothing left to explore!" in response to his desire to travel the world like Magellan. In so many ways, society seems to be telling us all the same thing. When the budget axe falls, science and the arts in schools disappear in favor of more math and English multiple-choice standardized test-teaching courses. Libraries close, science divisions in state and national government disappear. Television and other media no longer have full time science editors, apart from weather readers. I might be overstating this, given the success of the Discovery Channel and others, but really, don't they go the mostly for spectacle? As a society, we are losing the sense of a need for discovery, and we are not providing outlets for it, especially among our children. There is nothing, we are told, in actions if not words, left to explore...(a tweet making the rounds notes that "if you watch NASA backwards, it's about a space agency that has no spaceflight capability, then does low-orbit flights, then lands on moon.").

In classes, we teach what others have discovered and our students sit passively, learning facts but not the excitement of the human journey. In a geologic sense, many of the places in my country and state have been explored, but...not by my students. And that is what all my disparate threads are all about: the need to get students into the field. No textbook, no blog (including this one), and no virtual field guide can ever replace the adventure of placing your hands on the rocks of a fresh lava flow or the ancient crust, or a dinosaur fossil in situ, or a crystal gleaming in a cavity one has just opened up with a chisel. A personal discovery is just as significant, just as important, as all the discoveries made by the Magellans, Newtons and Einsteins of the world, because in that personal life it will never be forgotten, and it will enrich that life in a way that rote learning cannot.

"Raiders" was a great Saturday movie serial, a white knuckle adventure that was never meant to be a career documentary on being an archaeologist or geologist. Yet, scattered here and there in the plot were tidbits of truth. The most important lesson was that no discovery comes without education and preparation. Discovery is hard work sometimes. Indiana Jones may have been a tomb raider of the worst kind, but he knew where to look because he was educated. Discoveries can't happen without planning and informed intuition.

The textbook in physical geography was a revelation simply because it revealed how little we as a species knew only a century ago. There were 70 known elements, there were only stars in the universe, not galaxies, the sun shone because of condensation of gases and impacts by meteorites, the Antarctic was possibly some islands, and no reason at all was known for the occurrence of earthquakes and volcanoes. There was gravity, but there was also a luminiferous ether, and no such thing as radiation. The racism in the final chapter is shocking. But, for all of its shortcomings (in hindsight), there was also an expectation that the unknown would be discovered in the future. I don't get that feeling so much from textbooks today. There are huge mysteries still to be solved, and our kids need to know this.

So, despite budget disasters and cuts in education, the chance for rain and snow (in June!), and high gas prices, we are going to hit the road for two weeks, and our students are going to discover...something. I will try to keep you posted whenever possible.

The pictures bookending today's post are the settings for two of the most famous scenes from the Indiana Jones movies. Who can identify the locations and the two scenes? 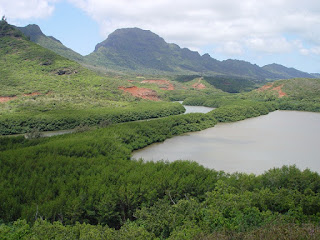 It is really sad that education doesn't promote new discoveries. We certainly don't know it all. Keep up the good work Garry. And have fun exploring on this journey of adventure.

Double Arch in Arches NP (my back yard).

Don;t know about the second, but looks like N. Montana or maybe somewhere in CA.

The first pic is definitely Double Arch in Arches National Park in Utah, the setting for the young Indiana Jones in "The Last Crusade" (Indy as a Boy Scout). The second is an ancient fish pond on Kaui, Hawaii, the setting for the opening scene of "Raiders of the Lost Ark", where the seaplane took off.