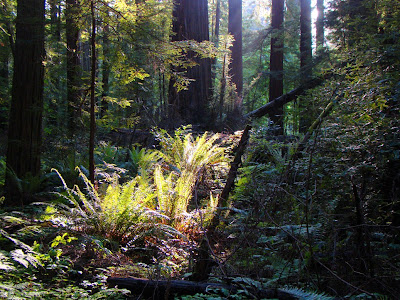 Quick...what is California's Official State Tree? And, what is the tallest and the largest living thing in existence? The answer is going to be confusing...because there are not single answers to these questions. 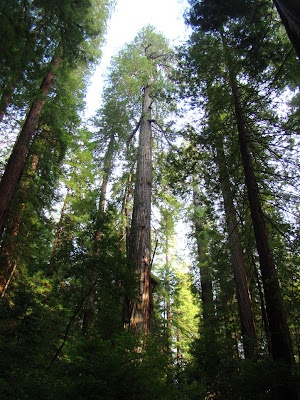 California's State Tree is the "Redwood". But what we call "redwood" is actually two different trees: the Coast Redwood (Sequoia sempervirens) and the Giant Sequoia (Sequoiadendron gigantea). Both are native to California, but they grow in two entirely different regions. The state legislature did not seem to know the difference when they established a state tree in 1937, and it took a decision by the state attorney general and subsequent legislation in 1953 to clear the matter...California has two state trees! 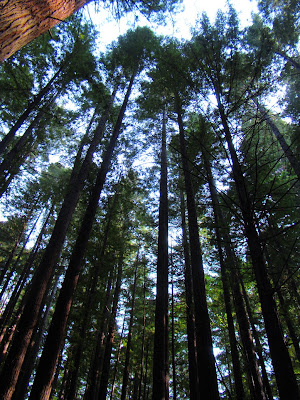 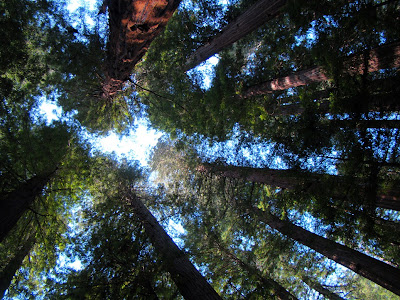 The Coast Redwoods are by far the most plentiful, growing in coastal mountains (surprise!) from Big Sur to just beyond the Oregon border. The wood is durable and resistant to fire and bug infestation, and was favored right away in construction. The loggers moved in, and in the last century and a half, more than 95% of the original groves were cut down. Remaining old-growth forests are preserved in Redwood National Park and numerous California State Parks, including several that are slated to be closed by the state legislature due to funding shortages ($22 million out of a budget of tens of billions...very sad and counter-productive; state parks produce local revenue). One of the largest of the state parks is Humboldt Redwoods State Park in the drainage of the Eel River upstream of Fortuna. Humboldt Redwoods was also the end of our journey on the Mattole Road loop along California's Lost Coast. 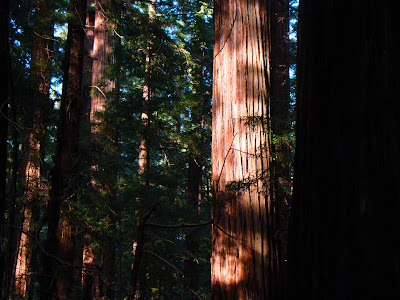 The trees grow in regions of extremely high precipitation, sometimes approaching 100 inches. In the northern California forests as much as half of the precipitation comes in the form of drizzle from fog, and that is one of the threats to the future well-being of the trees. Global warming is leading to a decrease in the number of foggy days in the region (about 24% fewer days in the last half-century), and studies are underway to understand how the trees will deal with these changes. 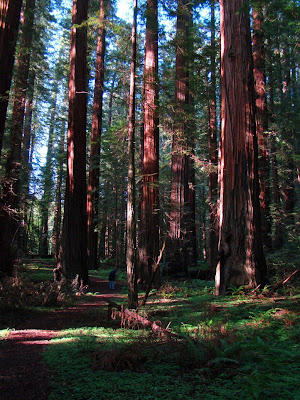 The trees happen to exist in one of the most geologically active corners of the state of California. The Coast Ranges have formed very recently at the nexus of several major fault systems, including the San Andreas fault and the Cascadia subduction zone. Numerous magnitude 7 quakes have shaken these forests in historic time, and every three centuries or so the subduction zone lets loose with a magnitude 9 catastrophe (similar in size to the recent quake in Japan).

The rocks that underlie the forests (at least in the region I visited) are the chaotically twisted and deformed sandstones and shales of the Franciscan Complex. At Humboldt Redwoods State Park, the rocks are part of the Eocene to Paleocene Yager Terrane. The poorly lithified rocks are subject to rapid erosion and mass wasting (landsliding), especially in areas where logging has removed the protective bracing of living tree roots. 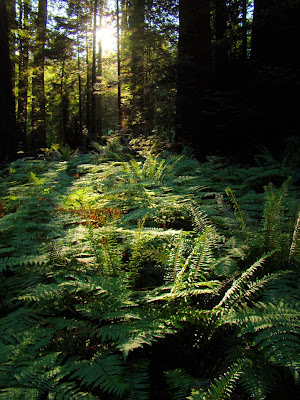 There are few words that can describe what it is like to wander in these forests of giants. The forests have a primeval feel, and it comes with justification. The history of these trees reaches back into the Mesozoic Era, which means that dinosaurs, instead of Bigfoot, once wandered through forests like these. Perhaps Pterosaurs once roosted in their branches. 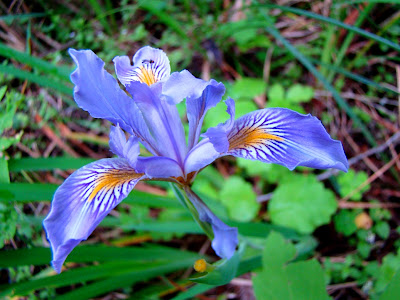 The trees once had a much wider range, with fossils having been found across most of the northern hemisphere, including Eurasia. The third species of Redwoods known, the Dawn Sequoia, was found in a single grove or two in China. The trees were apparently wiped out by the ice ages, when ice co-opted most of the climates where they thrived. Fossils of Redwood species are known from Yellowstone National Park in Wyoming, and Petrified Forest in Arizona.

Ronald Reagan was once quoted as saying "if you've seen one Redwood, you've seen them all". He didn't quite say that, but what he did say was worse, in a way: "I think, too, that we've got to recognize that where the preservation of a natural resource like the redwoods is concerned, that there is a common sense limit. I mean, if you've looked at a hundred thousand acres or so of trees—you know, a tree is a tree, how many more do you need to look at?"

The quote, from 1966, shows the problem with the attitude of many when it comes to understanding the role of the tree as an anchor species in a complex ecosystem. It isn't enough to preserve a handful of groves like a museum exhibit. Cutting up an ecosystem into little parts leads to the total unraveling of that system. It's sad to think that this isn't a case where we are threatening to do this; we've already done it. What can we do to repair it? 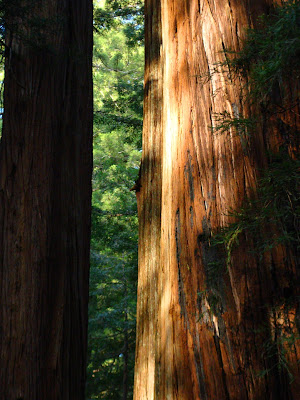 The map below is from the Save-The-Redwoods League, one of the oldest environmental groups in the world, and a group committed to saving as many examples of these forests as possible. They are worthy of our support.

The Redwoods are the most magical ancient forests I've ever had the privilege of walking through. I always see the little people peaking out from somewhere.