The Rigors of the Routine Life: Why I Might Be a Little Bit Homesick 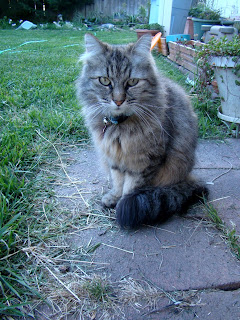 I remember a sequence in the movie "The Truman Show" when the assembled cast was trying to convince Truman that he really didn't want to leave his home island; there were posters in the travel agency describing the horrors of terrorism or something, and there were no flights to Fiji for a month, the bus out of town broke down, and when he took a car, a nuclear power plant blew up and blocked the highway. Even as a child, he said he wanted to be an explorer, like the great Magellan. His teacher responded by saying "Oh, you're too late! There's nothing left to explore!" 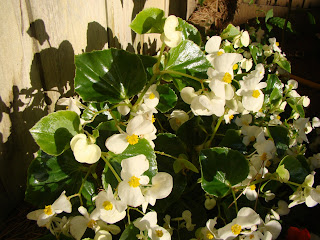 There's a person I know. He was married for many years, decades actually, to a fine woman. They raised several sons, and he worked every day at a bank. He was a vice-president back in the day when in relatively small banks, vice-presidents were not quite the greedy captains of industry and finance that they are today. Every day he would commute by bus or train into the city, do his work, come home to a meal that was ready as he walked into the back door. There was television, or on Fridays, card games with the sons and their families, and that was the way it was for years. His wife worked every day to make sure his routine was not interrupted. They seemed, when I knew them, to be happy enough with their lives.

Sad events intervened. His wife became seriously ill, and after several hard months, passed away. By then he was retired, and now he was alone. What was to happen now? Disruptive events in life have many outcomes, some good, some not so good.  And some people surprise you. He loved his wife and never has forgotten her. But to say he broke out of a routine is an understatement. He was curious about the world, and decided to see more of it. He made trips to Europe and Russia. He traveled back to the towns he had grown up in during the Great Depression and World War II. He looked up friends and acquaintances from decades past (and he did it the hard way, by telephone book and road maps; Facebook wasn't invented yet!). In his nineties, he is certainly slowing down, but he found a richness in his new life that was quite different than what came before. I respect him in so many ways for that. 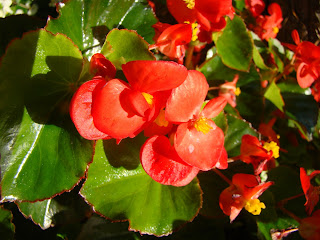 So this is a post about the rigors of the routine life. Routine gives our lives structure and stability. We work very hard sometimes to maintain it. We work, we eat, we sleep, we start over again, and there is a certain comfort, a big comfort really, in knowing what is coming next. I certainly have a particular routine in life. It was a different life from the person I spoke of above; I had chanced into a career that I loved, and it was career in which traveling and discovering the world was occasionally part of my job responsibility. I just had to be sure I was bringing students along with me! I'm just a few days away from leaving on a long journey through the Pacific Northwest and Northern Rocky Mountains and I am looking forward to it in so many ways. 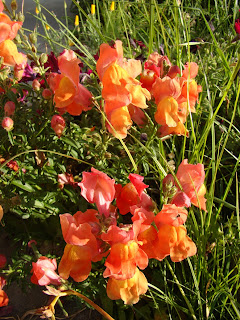 But a funny thing happened earlier this year. Actually not a funny thing at all, not in that sense. We've always had to struggle with tight budgets at my college; it's a fact of life that we must not waste taxpayers money, and yet offer the best possible education to our students that we can. But this year was different: the cuts were far deeper and whole programs were terminated. No one knew whose programs were on the chopping block, and it is an ugly feeling knowing that one could possibly lose a job after decades. And too many of my colleagues did lose their jobs. It's a story familiar to untold millions in our country during this depression (and that is what it is; the bankers may have their trillions, satisfying the economists that things are better, but I am surrounded by unemployed friends and foreclosed homes). It has been a scary year. 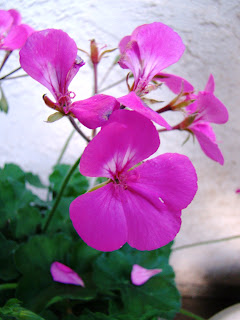 So I've been puttering about the yard this week, getting things weeded and trimmed so we can leave it for a couple of weeks. And I noticed a lot of beauty and color in the yard that had become so familiar over the years. We hardly landscaped this year; all the flowers that popped up were winter survivors or seedlings left over from last year. But they sprouted, and the porch is kind of a nice place right now in the early evening. And even before we've left on our journey, I realize I am going to miss my home a bit. We came uncomfortably close to losing it, and there is no certainty that the horrific situation at work won't be repeated next year.

And of course I always miss my sweet (really!) cat, and wonderful dog.

So tonight is a paean to the home life and routine and appreciating the blessings of the little things, like flowers in the yard that survive my disastrous efforts at home-based agriculture. Later this week comes a brand new journey to new places and high adventure. And there are wonderful things about both. Routine can be a bad thing, a limiting thing, but it can be a source of comfort as well. We just should just avoid being trapped in it. 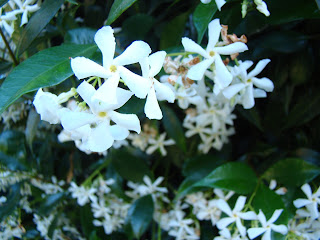 So, quoting our good friend Truman, "Good morning, and in case I don't see ya, good afternoon, good evening, and good night!" Blogging may be a bit light or non-existent while we are on the road, but you can be sure that there will be many stories to be told in a few weeks when we return. 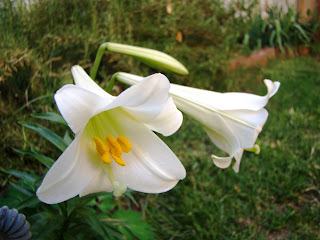 By the way, happy Easter. The Easter lilies by the air conditioner bloomed today, so it's Easter, right?
Posted by Garry Hayes at 10:09 PM

I have some routines that I enjoy so much it's bad to break them, yet I like change and spontaneity too. What's a geogypsy to do? Have fun on your PNW adventure and know that home will be there. Look forward to seeing some of my old stomping grounds.