The Way it Was: Yosemite in the Times of a Pandemic

The pandemic rages on, and our lives have been upended in so many ways we could never have foreseen. My heart goes out to all of those whose lives have been devastated, whether by disease, unemployment, or fear. We've been fortunate so far, and we've been careful to stay out of harm's way, staying home for the most part, wearing masks in public, and always the social distancing. 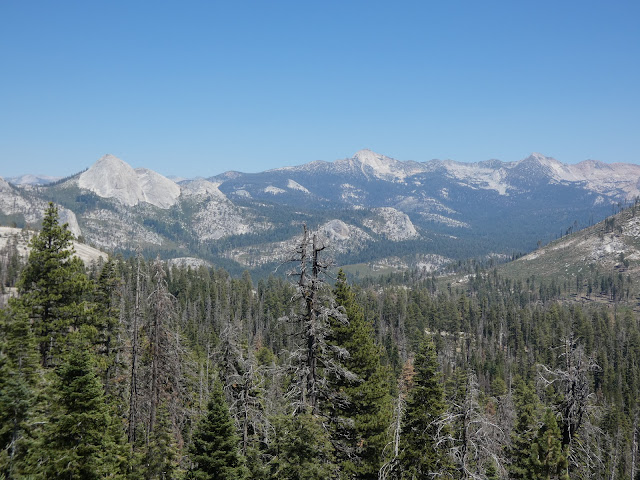 I walk along my river almost every day to maintain sanity and health, but except for a single short excursion up north for my grandmother's funeral, we've not been out of our county since March. But this week I went online and scored an E-ticket (you have to be an older person to understand that reference): a reservation for entry into Yosemite National Park. 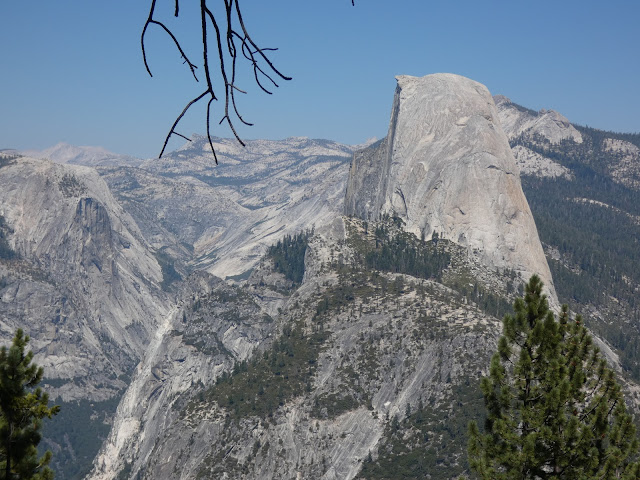 The park has been trying to deal with two opposing directives: opening the park as much as possible, and maintaining some degree of safety in trying to prevent the spread of the coronavirus. They settled on limiting the number of visitors by instituting a reservation system (info at reservation.gov). The goal is to have the park at about 50% of usual visitation. 80% of the reservations are available a month in advance, while the other 20% come available two days before the visitor's arrival. That's the ticket I was able to get. 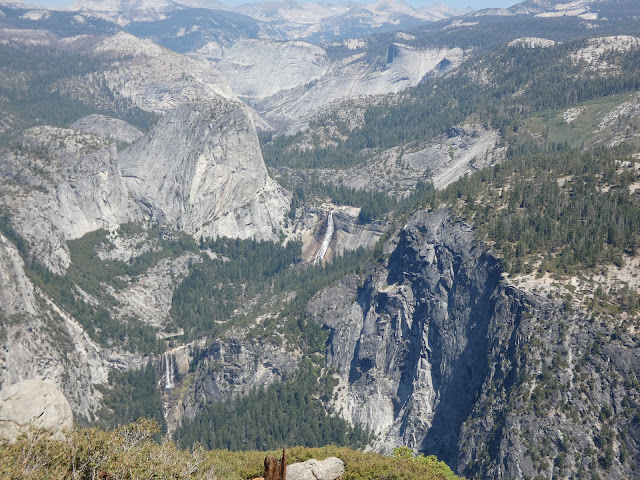 We headed up as early in the day as we could, intensely curious to see what things would be like. And out of the 100+ journeys we've made to the park in the last 30 years, it was unusual to say the least. There was a long wait at the entrance station like usual, but reason was different. There were fewer people, yes, but it took longer to confirm everyone's identity (the reservations aren't transferable). Once inside the park, the transformation was remarkable. There was very little traffic on the road, and there were spots available in every parking lot that we could see. The lot at Tunnel View (the top picture in this post) was only half full. And no buses were idling. 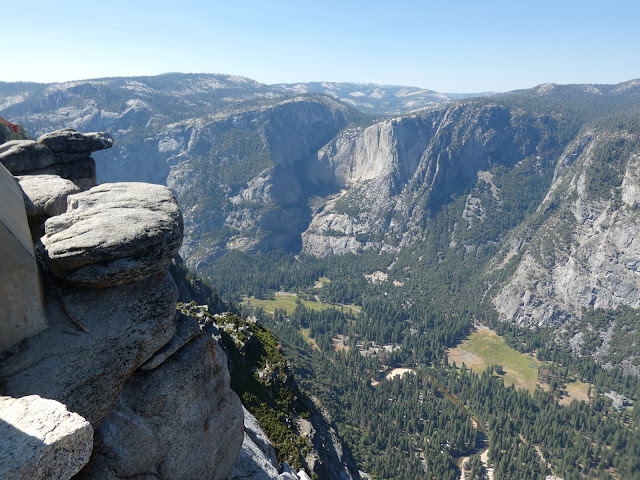 We headed up Glacier Point Road and had a long lunch at Summit Meadow, and we had it almost entirely to ourselves (admittedly not one of the 'destination spots' for visitors, but still...). We stopped at the nearly empty parking lot at Washburn Point, and then headed to Glacier Point, which was also only half full. It seemed a different world than from our 'normal' Yosemite experience. The picture below of Glacier Point was not cropped to remove people; that's how many were actually there. 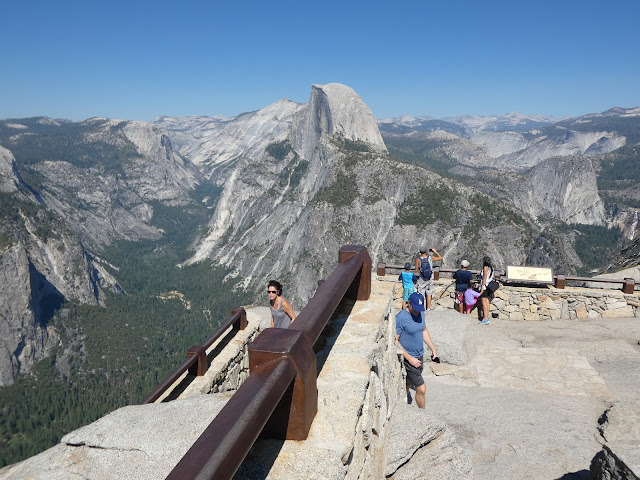 After so many months of sheltering in place, it felt so good to get out of the valley and see the high country of the Sierra Nevada. We've missed it so much. 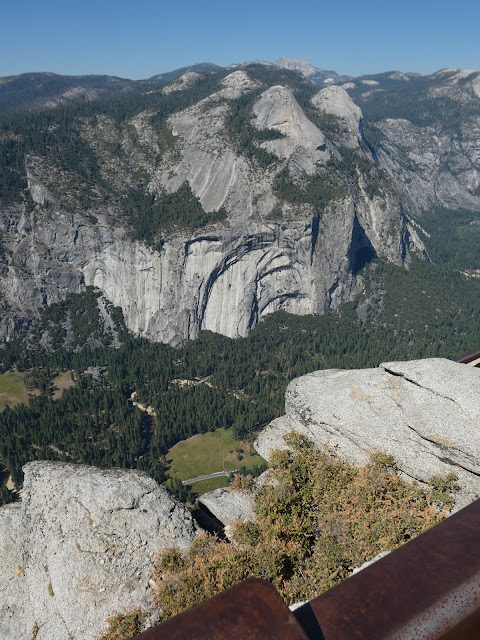 We drove back down to the floor of Yosemite Valley and found the valley to be equally devoid of crowds. There were a few gatherings near the taco trucks that are serving as food purveyors while parts of Curry Village are renovated. But again, most of the lots were uncrowded. The afternoon shadows were lengthening as we passed Sentinel Bridge and Lower Yosemite Falls (the merest trickle in this dry year), and we made our way down to Valley View. 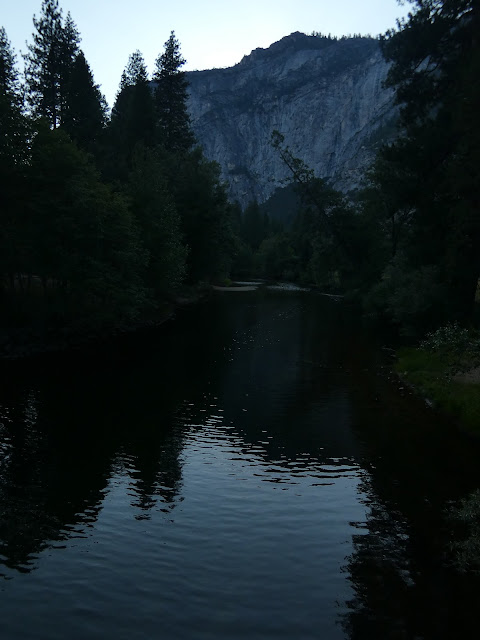 When Yosemite Falls is dry, Yosemite Point takes on an entirely different perspective. It's the prominent cliff that is still lit by the sun on the right in the picture below. Yosemite National Park is like that...there are those most famous cliffs like El Capitan and Half Dome that dominate people's experiences, but there are dozens of lesser-known rock cliffs and spires that in any other place would be national parks and monuments in their own right. 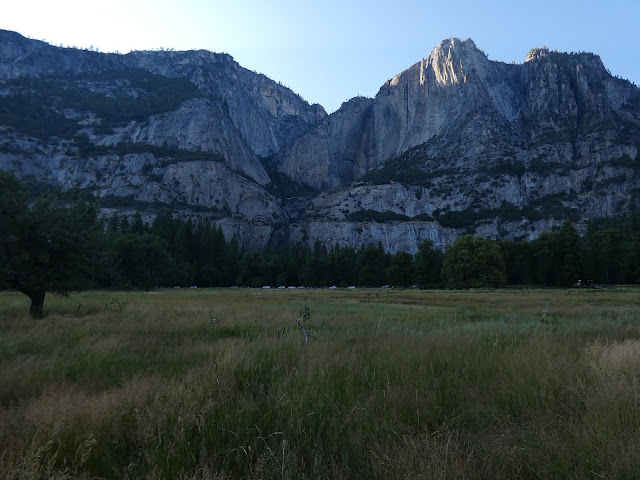 The Cathedral Rocks are one of those cliffs. They are the incredible cliffs in the picture below. They are behind you when you stare up the vertical face of El Capitan. I don't recall ever seeing them on the t-shirts and coffee mugs in the curio shops (although I don't spend a lot of time in the shops when I'm in the valley). 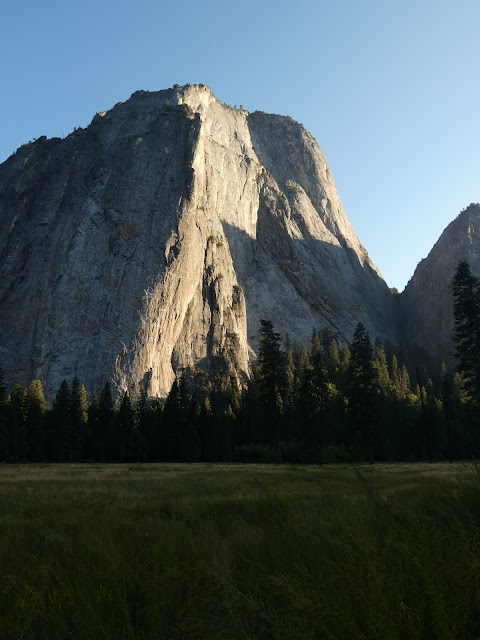 We made our last stop at Valley View where we could enjoy the evening light on El Capitan, Bridalveil Falls, and the other (better-known) side of the Cathedral Rocks. The Merced River was a beautiful reflective pool at this time of low water. 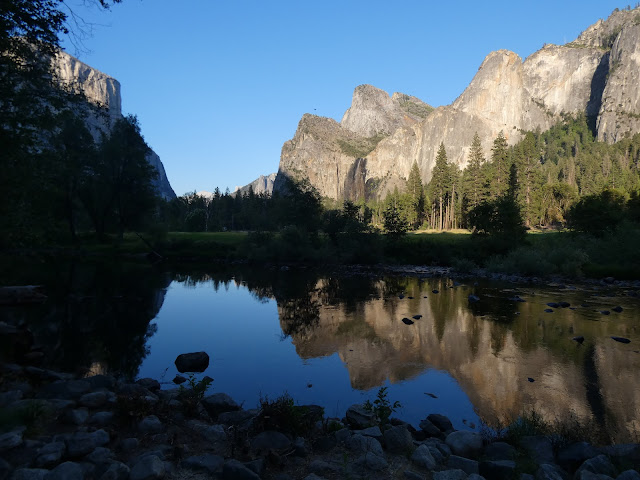 We noticed an American Dipper foraging in the water. It's one of the few songbirds that regularly swims. Also called the Water Ouzel, it was one of John Muir's favorite Sierra birds. I've only seen them a few times. 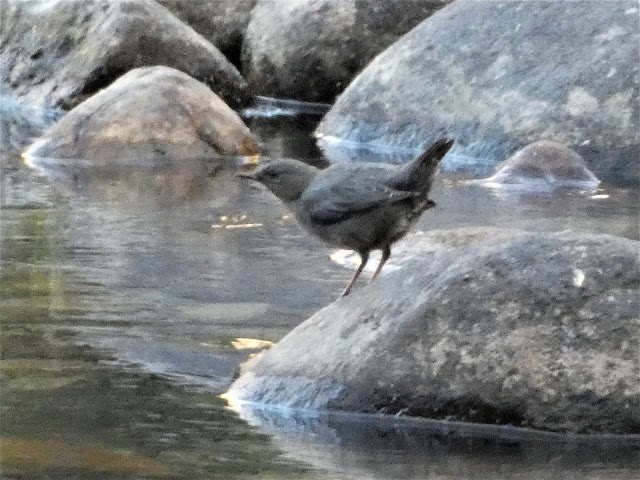 We saw a Black Bear at Crane Flats. There has been a lot written about the resurgence of wildlife in the absence of the usual crowds of humanity at Yosemite. It was simply napping away at the edge of the meadow and no one was bothering it. On the whole, Yosemite National Park was a delightful place to visit that day, a far cry from what we experienced during our Labor Day visit a year ago when we experienced bumper-to-bumper traffic jams, no parking, and no chance to see the sights. It wasn't fun for anyone that day.
We need to reconsider the role of our national parks in our national life. They are precious places, and we are loving them to death. Yosemite certainly isn't alone in this regard. Arches and Zion national parks in Utah in particular have become so crowded that few are able to experience and enjoy them in any meaningful way. I hate to say we need to keep a reservation system like this in place, but at the same time we also need to make more places available to our population.
One of the most egregious acts by the present administration was the destruction of two of our most significant national monuments, Bear's Ears, and Grand Staircase-Escalante. These parks are within an easy day's drive from Zion, and offer equally spectacular natural experiences. But they were eviscerated by the administration, Grand Staircase by 50%, and Bear's Ears by 90%. We need these parks, and more. It's something to consider as we enter into a bitter election season. Which party is better equipped to safeguard our national treasures? 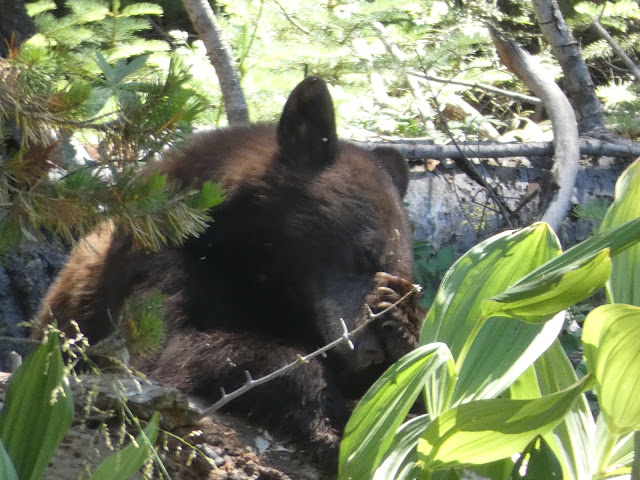 And that's the way it was in Yosemite. Words can barely describe the beauty and serenity of the day.
Posted by Garry Hayes at 11:52 PM

What a lovely place. The views are so breathtaking! Thank you so much for sharing! Please continue to stay safe :)

A reader from Malaysia