You wouldn't know it from the fine physique I carry around on my middle, but I once had an exciting career in high school track and field, and also cross-country running. I was even one leg of a relay race against a relay team with Steve Scott, one of America's greatest milers (yes, our team lost). I learned a lot from that experience, the most important being that I was too lazy to be a world-class athlete, and too slow. But the other thing I learned was that some teams were so good that their junior varsity teams could beat any other varsity team in the district.

Which brings us to Yosemite Valley. I've been up to the park twice in the last month, but Mrs. Geotripper wasn't able to come along, so I didn't argue at all on Sunday when she said "Let's go". I wrote a recent blog showing off some of the beautiful waterfalls that made the valley famous ("Yosemite's Dance of the Seven Veils"), but this trip I was realizing that Yosemite's junior varsity waterfalls are as good as any other valley around. You might miss them if you visit in the summer, but they are stunning when you get a chance to see them.
One of them has the greatest free-fall of any waterfall in the valley (and probably in the United States). Called Ribbon Fall, it drops 1,612 foot (491 meters). Because it is one of the first ones seen by visitors arriving in the valley (it's west of El Capitan near the entrance to the valley), it's often mistaken for Yosemite Falls. Yosemite Falls is technically a taller waterfall at 2,425 feet (739 meters), but it's broken into three parts with the Upper Falls having the greatest free-fall at 1,430 feet (440 meters). Ribbon is an incredible sight at this time of year, but it dries up quickly in the spring, as it has a very small watershed. 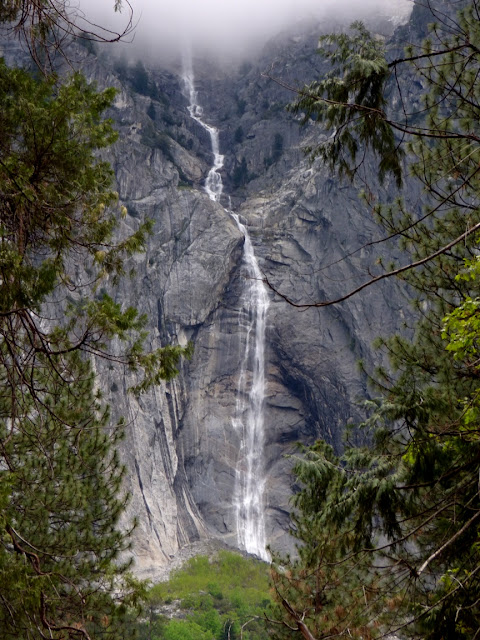 I showed off Sentinel Falls in the last post about Yosemite, but I got closer this time and got a picture from a different angle. The falls are on the south side of the valley near Sentinel Rock and drop 1,920 feet (590 m). 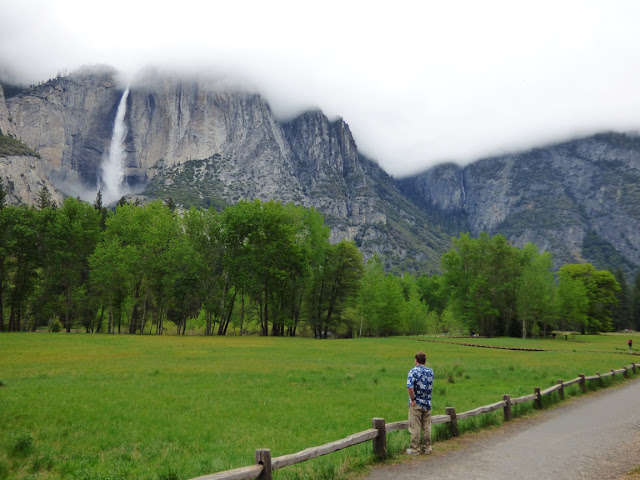 Yosemite Falls (2,425 feet/739 meters) are of course the waterfall of Yosemite Valley, but few people notice that there is another fall visible in the same scene. If you look in the distance on the right, you can just make out Lehamite Falls (1,180 feet/360 m), the only waterfall in Yosemite that retains an original Ahwaneechee name ("Arrowwood Fall"). It's true that the falls are a bit less spectacular than others in the valley, but were it not for a quirk of the glaciers, Yosemite Falls would have been very similar in appearance to Lehamite. Yosemite Creek was diverted by a glacial moraine and forced to its present location on the sheer cliff.
People who arrive at Yosemite by way of Highway 140 through the Merced River Gorge are treated to a pair of waterfalls, one that is hard to miss and another that is hard to find. Cascade Creek and Tamarack Creek join together a thousand or so feet above the river and form Cascade Falls, with a drop of about 500 feet or so. There is a pullout and a parking area, so this one is hard to miss.
There is a slightly "off" interpretive sign at the falls. It doesn't make clear that these are the Cascades, and a map suggests that one might be standing under Wildcat Falls. I noticed the discrepancy and looked around, believe it or not, for the first time in 80+ visits to the park and tried to see Wildcat Falls (720 feet/219 meters). It wasn't that easy, but hidden off in the trees to the west was a multi-tiered waterfall. I didn't have time to see the grotto at the base, but I got the shot below of the biggest single drop.
One more easy-to-miss fall in the valley is Silver Strand. The reason is that it above and slightly behind the awe-struck visitors standing at Tunnel View, perhaps the most famous vista in the park. The fall drops 574 feet (175 m), and often completely freezes over in winter, becoming an ice fall. 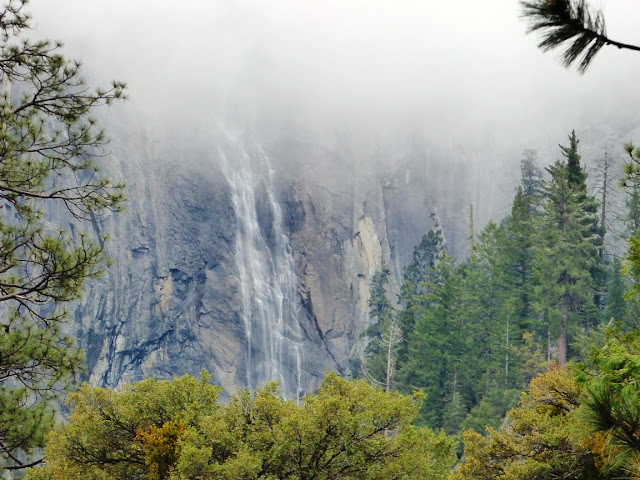 Silver Strand was almost completely obscured by the low cloud deck on Sunday, so I've included a picture from our trip a week ago when the skies were clear.