Yosemite's Dance of the Seven Veils: The Valley on a Rainy Day 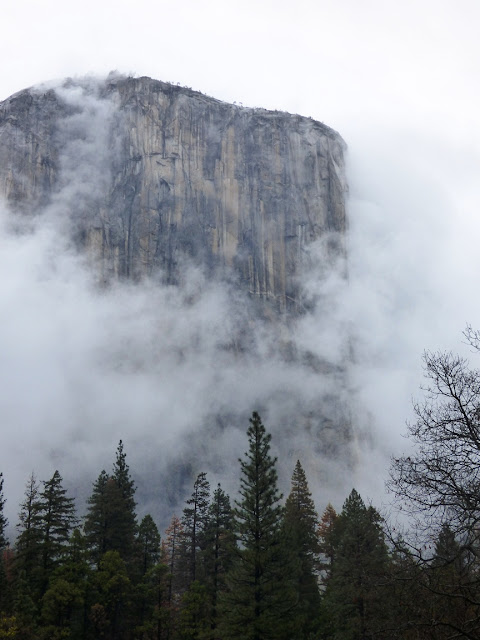 She freed and floated on the air her arms
Above dim veils that hid her bosom's charms...
The veils fell round her like thin coiling mists
Shot through by topaz suns and amethysts

"The Daughter of Herodias" by Arthur O'Shaughnessy

It goes without saying, but when the rain falls, Yosemite is a different place.  When storms are moving up the western slope of the Sierra Nevada, Yosemite Valley produces strange cloud effects, due to a half-mile deep cleft that has warmer air currents rising into the storm clouds. The familiar big rocks like Half Dome or El Capitan may be hidden completely, or they may reveal themselves in small bits at a time, like the dancer Salome or her many successors throughout time.
I took two trips to Yosemite Valley in April. The second trip on the 30th was clear and sparkling like a diamond. You can see the spectacular beauty in the previous post about the centennial of the National Park Service. The weather forecasts for the first trip back on the 9th weren't so promising. They suggested precipitation all morning with a chance of clearing in the afternoon. The "clearing" part wasn't to be. The rain never stopped from the time we arrived until the moment we left. It ebbed and flowed, sometimes declining to a light drizzle that allowed us to make note stops. But we never saw the whole valley that day. Just little bits at a time.
A disappointment? Oh, not at all. Clouds give the cliffs a sense of perspective and depth that is not always possible on a clear day. The cliffs can seem higher, appearing above the clouds. And the waterfalls...on a rainy day, there are waterfalls everywhere, in the most unlikely spots, and many are impossibly high, rivaling Yosemite Falls in some cases. And the familiar falls are booming.

Staircase Falls come off the cliffs near Glacier Point above Curry Village (yeah, I know, it's called Half Dome Village at the moment). The falls last only a few weeks in the spring and during storms, but fall in a series of steps for a combined drop of 1,300 feet (400 meters). On a quiet day one can hear the water splattering on the cliffs while munching pizzas in the village (always a happy memory!). The "staircase" is formed by a series of prominent diagonal joints (pressure-release fractures) that run across the nearly sheer cliff.
Yosemite Falls are the most famous and iconic of the falls in the valley. They include the upper falls with a drop of 1,430 feet (440 meters), the Middle Cascades at 635 feet (206 meters), and the Lower Falls at 320 feet (98 meters). The total drop is 2,425 feet (739 meters), making Yosemite Falls somewhere around the 5th to 7th highest waterfall in the world.

Yosemite Falls are unique, owing to the extreme drop off of an illogically placed stream channel. It turns out the falls were once flowing down a far less spectacular channel just to the west, but a glacial moraine upstream diverted the original creek to its present-day location.
The Royal Arches Cascades plummet about 1,250 feet (381 meters) from the north wall of the valley just west of the arches. They are another ephemeral waterfall seen only in the spring or during rainstorms. They are truly unique in one respect, in that you can easily reach the base of the falls within a short walk of the Ahwahnee Hotel (yes, I know, the "Majestic Yosemite" Hotel, but whatever). The trail, part of the North Valley Loop, takes off from the parking lot, and the base of the falls are just a short scramble up the slope.

There are two waterfalls on the south side of Yosemite Valley that are rarely seen by summer visitors to the park, Sentinel Falls (1,920 feet/585 meters), and the falls on the right in the picture above, which may be Fissure Falls, but I am not at all sure. They may not have a name at all (Fissure Falls is an informal name anyway). Sentinel Falls may be the most spectacular waterfall that no one has ever heard of. Can you imagine how famous they would be if they were in any other setting?
Our short tour of the "seven veils" wouldn't be complete without a feature that actually has "veil" in its name. Bridalveil Fall is often the first waterfall seen by park visitors, being quite obvious from Tunnel View and many other vantage points on the west side of the valley. It drops 620 feet (190 meters from the valley between Cathedral Rocks and Leaning Tower. A short trail from a crowded parking lot leads to near the base of the fall. This time of year, you will get very wet. It didn't matter all that much to my students that day, since they were already wet to start with.

If you visit Yosemite on a rainy day, you are quite likely to miss something. Our students never got a clear view of Half Dome or Ribbon Falls, or the panorama from Tunnel View. But they got to see a different Yosemite, one in which water was pouring everywhere off high cliffs in unnamed waterfalls, and cliffs playing hide and seek with the clouds. It was good enough!

I think this is my favorite of your posts. Staircase Falls -- what a treat!