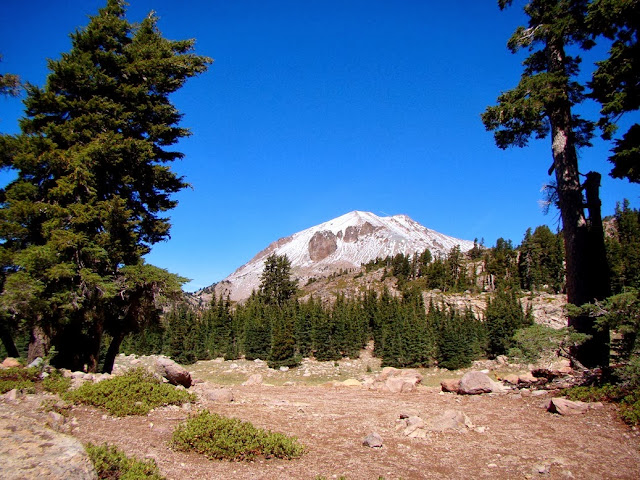 "Now, I don't know,  I don't know where I'm a gonna go, when the volcano blow"
Jimmy Buffett

Mt. Tehama is long gone, and Lassen Peak blew off all her accumulated stresses and frustrations with the eruption in 194-17, right? I mean, it's all a national park now, and that means it's like an amusement park and the park service would never allow the volcano to go erupting on all the tourists, right?

Actually, the Lassen Volcanic Center is on the short list of the most likely sites of volcanic activity in California, according the the California Volcano Observatory. And there is plenty of evidence that hot magma still lurks beneath the surface in the national park: there are five active geothermal areas in the park boundaries. 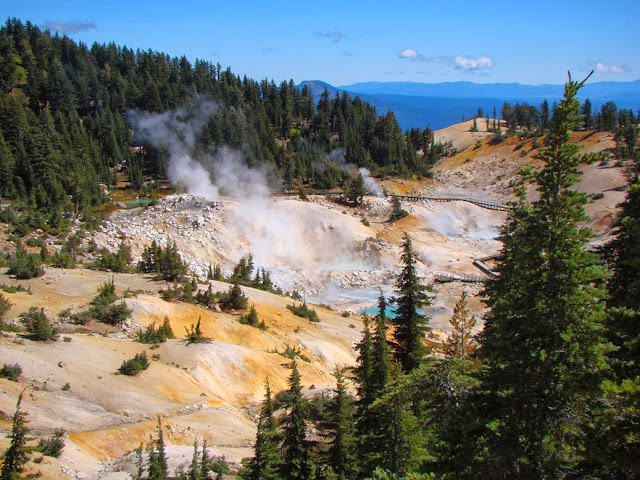 It was the last day and the last stop of our late September field studies adventure through the Cascades of Northern California. We had explored the Castle Crags, Mt. Shasta, Lava Beds National Monument, Medicine Lake Highland, and McArthur-Burney Falls, as well as Chaos Crags, Lassen Peak, and Mt. Tehama in Lassen Volcanic National Park. Our destination was Bumpass Hell, at the end of a spectacular 1-1/2 mile hike. 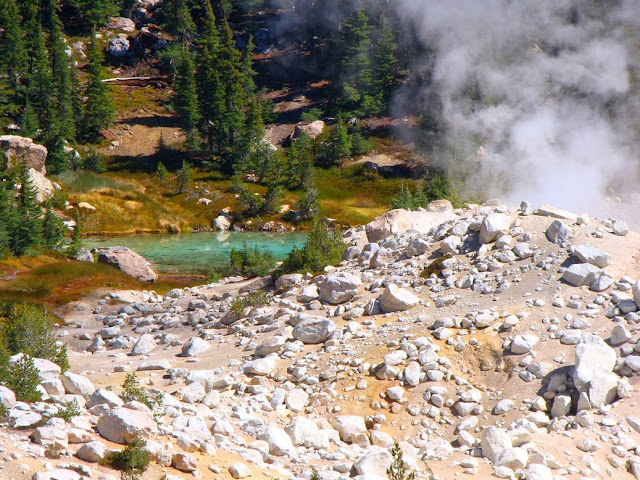 Bumpass Hell was named after an early pioneer rancher in the area, Kendall Bumpass who had good reason to call this place his hell: he inadvertently put his leg through a thin crust of silica and plunged it into the boiling acidic water beneath. He eventually lost the leg. 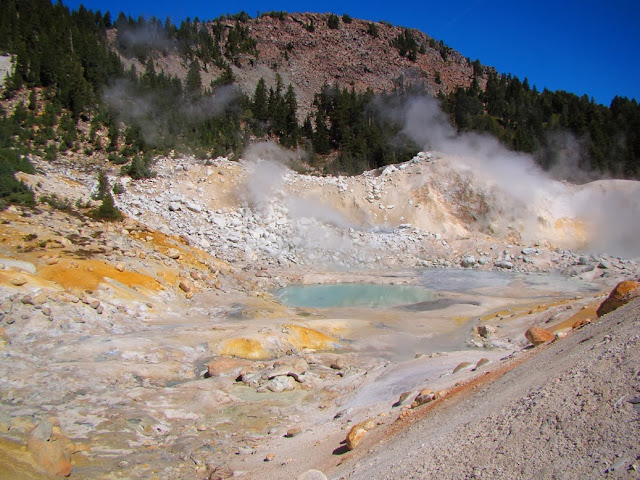 Being the most active geothermal area in the park, one might think that Bumpass Hell sits atop the magma chamber, but it actually lies a mile or two east of the body of molten rock (which sits at a depth of about 3 miles). Water at depth is heated until it turns to steam at temperatures exceeding 400 degrees, and the steam rises along fractures and fault lines where it condenses and reacts with local pockets of groundwater. The water is general highly acidic, and emerges at the boiling temperature (as discovered by Bumpass and numerous careless tourists who choose not to heed caution signs). 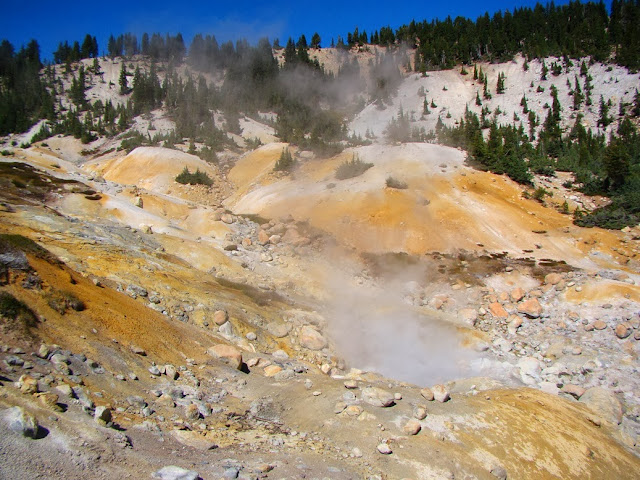 In a general way there are four kinds of geothermal features, and three of them can be viewed at Bumpass Hell. If it is the dry season, there might not be very much water and the vents will be filled with the clay and mud formed from the decomposition of the surrounding andesitic volcanic rock. The mucky cauldrons are called boiling mudpots. These acidic pits are definitely not recommended for facial care schemes.

The black sludge in the picture below is made of finely divided particles of iron pyrite (fool's gold). That might be counter-intuitive given the familiar brassy luster of the mineral, but geology lab students will recall that the streak (color of the powder of a mineral) is black. 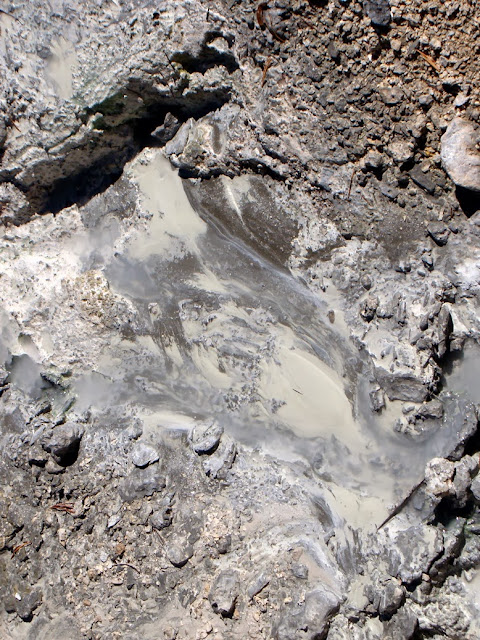 More familiar features are hot springs. Hot springs can be found in many geologic settings, including along fault lines, but volcanic hot springs are in a class by themselves. They are not the kind of springs that one would want to be soaking in. The temperatures at Bumpass Hell are at the boiling point, and as previously noted, the water is highly acidic. 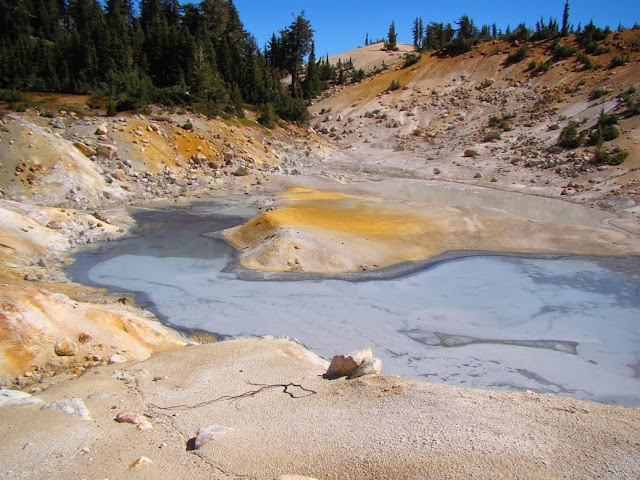 If there is not very much water available, for instance in the late summer or fall, steam vents will be common. They are called fumaroles. Fumaroles are a good spot to see sulfur crystals growing (see the picture below). At the top of my list of worst possible jobs would be that of sulfur miner. I've seen articles on mine workers in South America who have to climb into volcanic craters and scrape off the sulfur crystals from active fumaroles, risking scalding burns and the scarring their lungs by breathing in the acid-rich air. 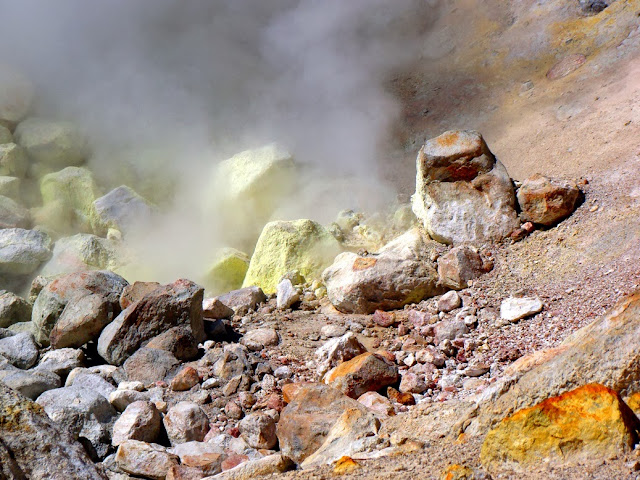 The only type of geothermal feature that is not found at Lassen Volcanic National Park is a geyser. Geysers like those found at Yellowstone National Park (where something like 70% of all the world's geysers are found) require very specific conditions underground that are not present at Lassen. The main reason is probably that the rocks and magmas at Lassen are not as silica-rich as those at Yellowstone. The groundwater plumbing maze beneath Yellowstone is coated with silica deposits which produced a closed system in which the pressures can build high enough to produce the spouting fountains. There are too many "holes" in the plumbing at Lassen. 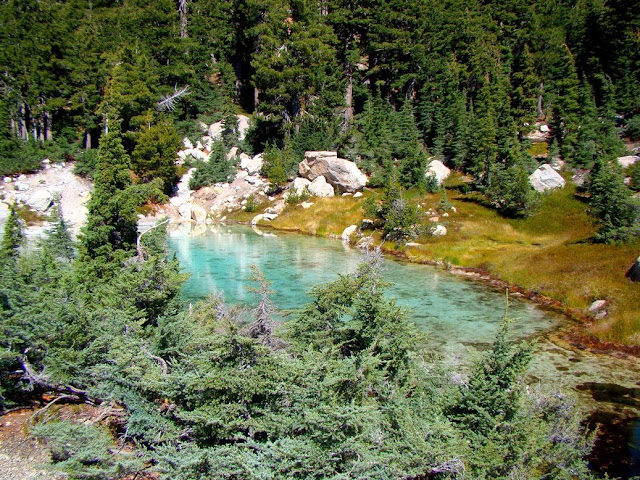 Does the presence of magma underground at Lassen mean that an eruption is coming soon? It's hard to say. It may be that the eruption of Lassen in 1914-17 really did relieve pressure and stress in the magma system and that the magma today is simply cooling off and solidifying. This is suggested by the relative rarity of eruptions at Lassen (the recent event, Chaos Crags a thousand years ago, and the formation of Lassen around 28,000 years ago). But it could also be that the magma chamber still has an eruption or two left in it. In any case, we can be fairly confident that we will know something is afoot, because magmas don't sneak up to the surface without causing other forms of mayhem, such as earthquakes, changes in ground elevations, gas emissions, and increased geothermal activity. 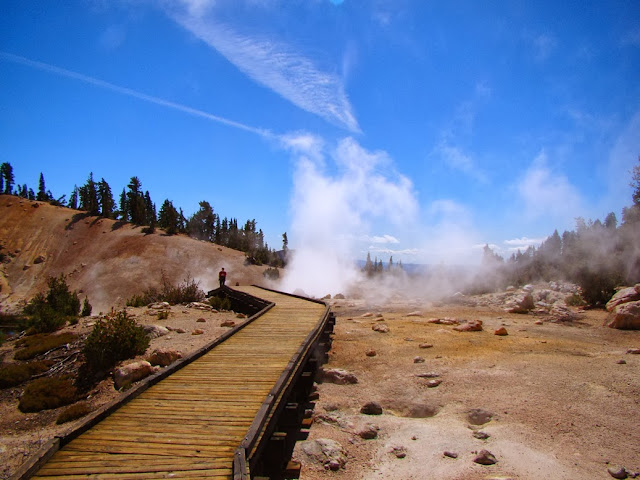 I'll be watching. And when everyone else is running away from the eruption, me and lots of other geologists will be trying to get closer!

I hope you've enjoyed this little vignette on the Cascades of Northern California. Look for an exploration of the central coast of California next!
Posted by Garry Hayes at 3:19 PM

Fascinating area - I chose not to go to this area when in the park years ago, and now that I understand why it's called Bumpass Hell, I'm glad I didn't!! I'll learn from a distance. Thanks for another wonderful lesson, Garry. Great photos.