My California, A Bipolar State 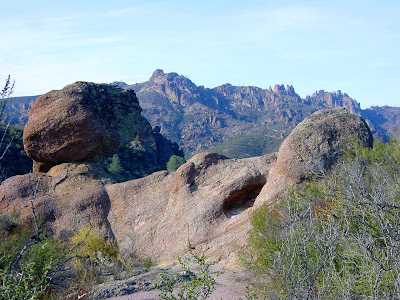 It didn't take long for Ron Schott and Silver Fox to figure out my little quiz yesterday about some odd similarities and disparities in California geography. The question had to do with an "a is to b as c is to d" equivalence concerning the Pinnacles and Neenach volcanics, and San Luis and Castaic reservoirs. The short answer is: they are on opposite sides of the San Andreas fault, they are separated by 200 miles or so, but they are exactly the same. The volcanics are the same volcano, and the reservoirs hold water from the same river system. The difference is the magnitude of timing: it took the San Andreas fault more than 20 million years to shift the sundered volcano 195 miles apart, but we have made an artificial river that carries water 200 miles south in a matter of days or weeks.

I've talked about the story of the Pinnacles volcano in the past (here, for instance), but in short, a volcano that erupted in the vicinity of Palmdale and Gorman in southern California has been ripped apart, and a portion has been transported north at the stunning pace of 2 inches per year, along with the entire Baja Peninsular and everything else west of the San Andreas (see the map above). In some places the fault creeps (see this post from last week), but in at least three long segments the fault builds up stress which is released in huge earthquakes upwards of magnitude 8. The quakes have recurrence intervals of around 100-150 years, and we have experienced two, or maybe three of these in recorded time (1857, 1906, and possibly 1812). If you've done the math, you understand why seismologists are always going on about being prepared for the BIG ONE(s)... 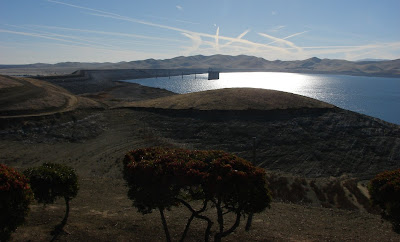 The California Water Project is an engineering marvel (or monster, depending on your political and environmental leanings). The state is truly bipolar, in political leanings (kind of a coast versus inland bifurcation), population (mostly in the south), and in water availability (mostly in the north). The problem is that all the people down south need water, lots of it, and the local mountains only capture about 15% of what they need. In 1960 California voters passed a massive (for its day) bond issue of $1.5 billion to construct a system of aqueducts, canals and reservoirs to transfer entire rivers to the southland. The peak pumping discharge exceeds 13,000 cubic feet per second, which to me is pretty incredible given that our local river, the Tuolumne, is considered to be in flood stage at just 9,000 cfs. It mostly provides water for agriculture in the south San Joaquin Valley where the land had been sinking for decades from overdrafting the groundwater. The remainder is pumped over the Tehachapi Mountains to provide water for 20 million plus people. 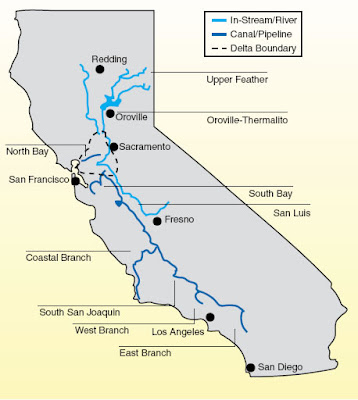 Map courtesy of the Legislative Analyst's Office of California

San Luis Reservoir is the largest offstream reservoir in the country with a storage capacity of more than 2 million acre-feet. 'Offstream' refers to the fact that the watershed it blocks provides little or no water. All of it is provided by the aqueduct.
The California State Water Project has caused problems. Decreased water flow into the Sacramento Delta and San Francisco Bay have caused serious environmental problems, and have affected salmon runs as well as impacting other fish and bird populations. It also has a gaping vulnerability: a moderate earthquake could destroy levees in the Sacramento Delta, and inundate the Tracy pumping station with salt water for months or years depending on how soon winter runoff could flush out the water (check my previous post on this here).
Our state is bipolar. After fossil fuels, water is one of the most contentious of political issues that we face now and in the future. It would help if people stopped a moment sometimes while spraying off the driveway and watering their tropical rainforest plants they use for landscaping to consider how much effort was made to get that water.
Posted by Garry Hayes at 10:30 AM

You want people to stop and consider the future effects of current actions? Wow, you are a dreamer!

I think Ron did all the figuring (although I did recognize the Neenach-Pinnacles connection) - I merely tweeted that he'd figured it out. :)