Similarities and Disparities: Odd Thoughts and Connections from the Road 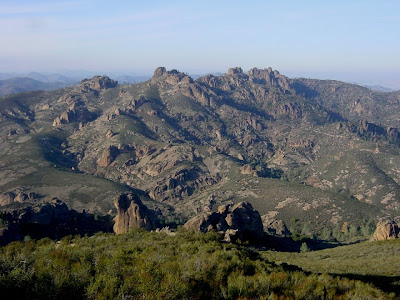 When you are stuck on a 400 mile long highway on a holiday weekend, the mind wanders in strange places. As I drove along, I made kind of an odd connection between a few places I visited in the last week. Can you? The picture above is at Pinnacles National Monument in the central Coast Ranges. The place in the picture below is part of the Neenach Volcanics in the Transverse Ranges of California between Palmdale and Gorman. 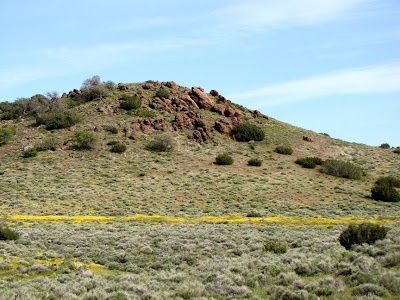 The lake in the picture below is San Luis Reservoir near Santa Nella. 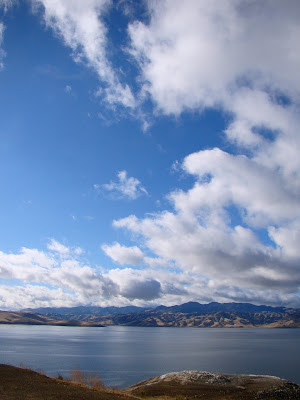 The lake in the picture below is Castaic Lake in Southern California (picture from the commons at Wikipedia). It fills a canyon region in the western San Gabriel Mountains near I-5 above the Santa Clarita Valley. 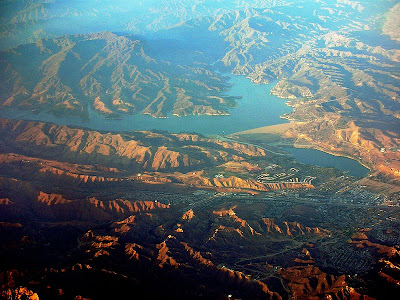 OK, so here is my observation: Picture #1 is to picture #2 as picture #3 is to picture #4, but on a different scale of magnitude (magnitude of what? Not stated here!). Any ideas?
Posted by Garry Hayes at 6:51 PM

The Pinnacles and Neenach volcanics are offset by translation along the San Andreas fault. The San Luis Reservoir and Castaic Lake waters are offset by pumping on the California Aqueduct. The distance of offset in each case is comparable, but the difference in magnitude of time involved in the offsets is huge. It took about 23.5 million years to separate the Pinnacles and Neenach volcanics by transform motion along the Pacific-North American plate boundary, whereas it takes only hours to days for the water to cover this distance in the aqueduct system.