Travels in Cascadia: Howe Sound and the Challenge of Living (and Mining) in Vertical Places, Part 2 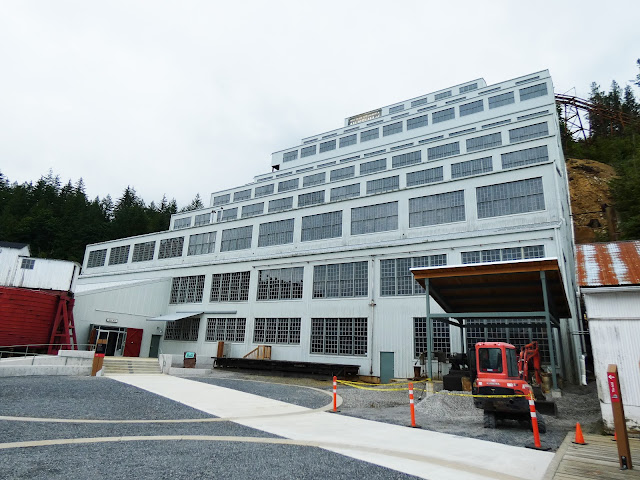 Howe Sound, the southernmost glacial fjord in western North America, is a fascinating place to explore. We've already looked at the journey by ferry that we used to get there, we've looked at one of the toughest hikes I've ever taken for a bird's eye view of the sound, and a look at some of the engineering required to live in a vertical place. 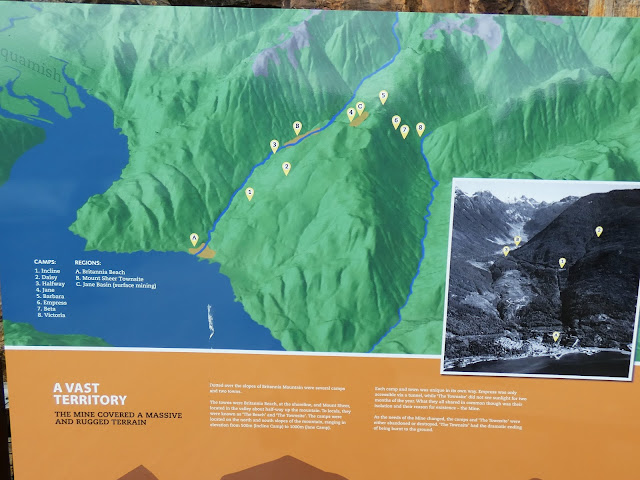 Today's post is about resource extraction. That mountains have formed here at Howe Sound suggests that huge forces have acted in the interior of the Earth, and the tectonic activity is very often accompanied by mineralization. The rocks here include ancient marine sediments and volcanic rocks that have since been metamorphosed. Hydrothermal activity leached out metallic ores over a wide region and concentrated them in spring deposits on the ocean floor. The ores included iron, zinc, gold, silver, and arsenic, but most of all, they included copper. The ores were discovered in 1888, but it was sixteen years before the ores could be mined and processed because of the remoteness of the region and the difficult terrain. In 1904, the Britannia Mine began production, ultimately becoming the biggest copper mine in the British Empire. 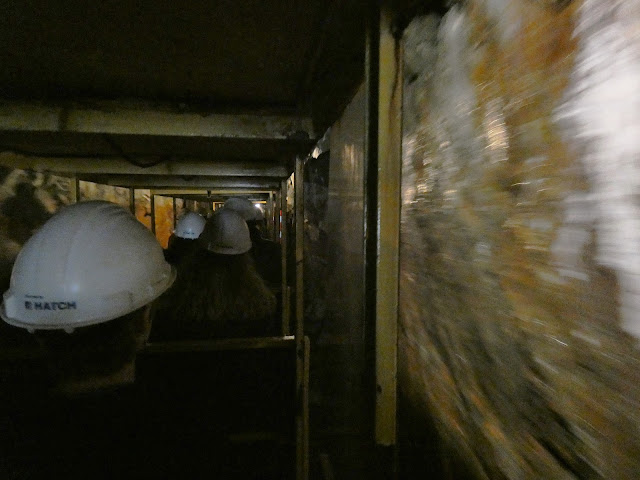 There were extraordinary challenges in developing the mines, not the least of which was the steep terrain, and the lack of access. Landslides and flash floods were constant hazards, and two events were notable: in 1915 a slide demolished one of the mine camps, killing 56 people, and in 1921 a flash flood killed 37 individuals. The mines themselves were dangerous (as they always are) with 98 fatal accidents over the 70 year history of the mine. 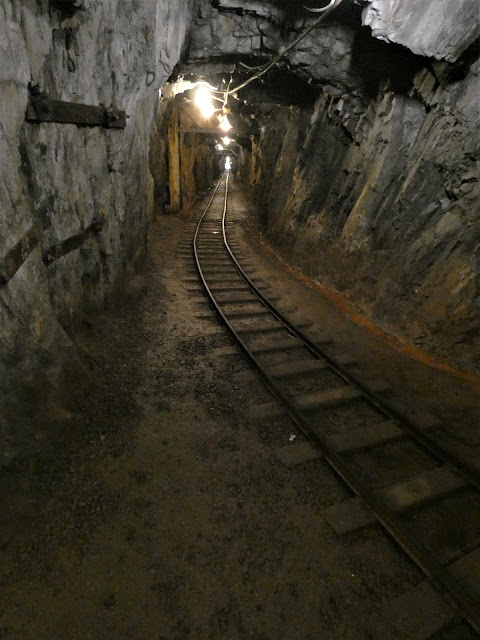 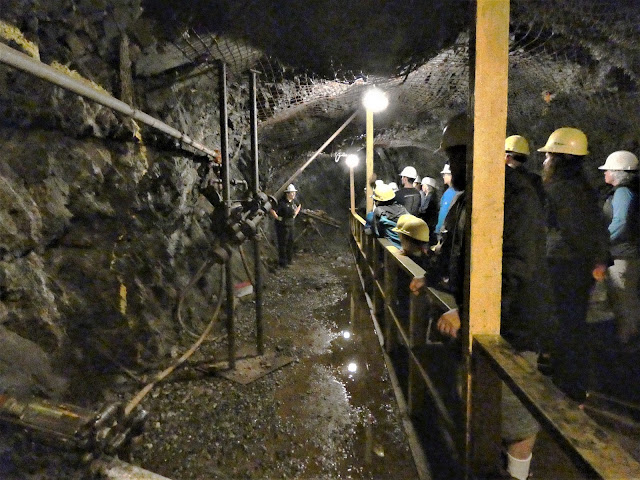 The closure of the mine in 1974 was devastating to the local community. Not only were the jobs suddenly gone, but the 130 miles of underground tunnels exposed sulfide minerals to the atmosphere, and acidic waters laced with heavy metals were draining down the hillsides and into the otherwise pristine waters of Howe Sound. The mine was one of the worst point sources of pollution in all of Canada. Mitigation efforts have been ongoing for years, with water being treated to remove the metals, leaving a toxic sludge that is put back into the old mine tunnels. 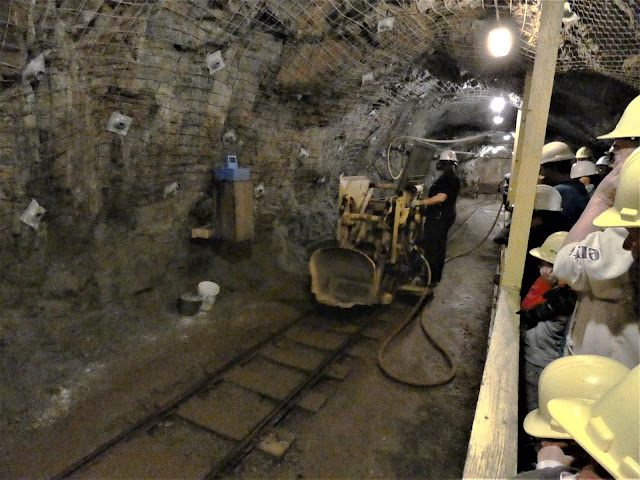 The community that remained faced the future of many mining boom towns: loss of population, despoiled water and massive scarring of the landscape from mining activity. Instead of dying away, the community hit on the idea of creating a museum out the remnants of the mining complex. One of the biggest problems was the concentration mill, the 20-story-tall factory just above the coast, and visible from the highway (see the first picture in this post). It was dilapidated and falling apart, but funds were secured to replace the windows and the siding in the early 2000s. With the arrival of the Winter Olympics in 2010, much of the museum complex was in place. 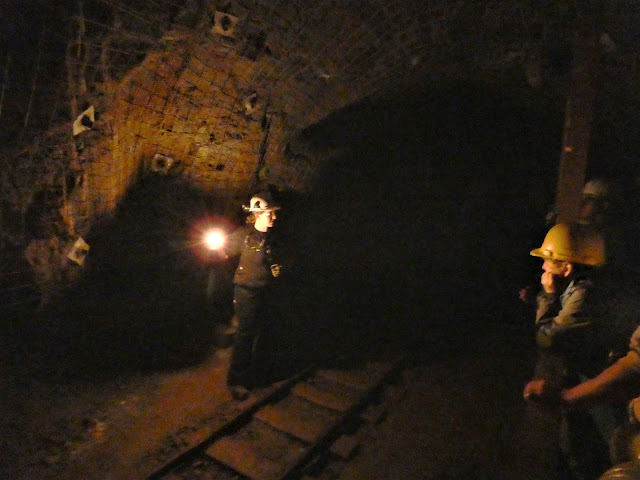 Our tour was well-done. They recommissioned an ore delivery tunnel near the concentration mill to serve as a model of the underground workings that are actually found mostly in the mountainsides upstream. The drilling equipment was reconditioned into working order, along with the mucking machinery. The drilling demonstration was LOUD (we were warned specifically to cover our ears), but it really brought home the kinds of conditions the miners had to work in. I have little doubt that many of them had serious hearing problems later in life. I don't know what Canada's version of OSHA is called, but they would never allow the miners to work without ear protection today.

They also demonstrated the carbide lamps that were used for lighting in the mines for many decades (above). Better than candles, certainly, but I would want some bright flashlights, and a bunch of them. Being lost in a totally dark mine (or cavern) is one of my serious phobias. 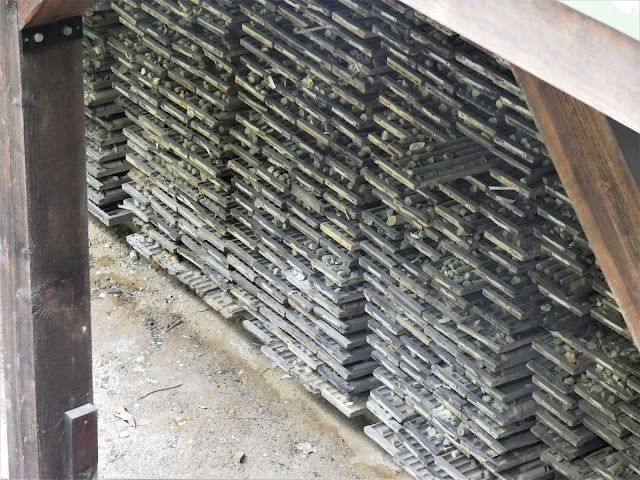 I deeply appreciated one aspect of the tour that most people might not...they preserved untouched one of the core shacks from the mine. I've seen only a few of these, and the ones I've seen were much smaller. One might wonder how the miners knew which direction to build their tunnels to reach the richest ores. They drilled thousands of cores into the mountain to sample the rocks so they could map out the ore bodies. The core shack preserved tens of thousands of these cores. 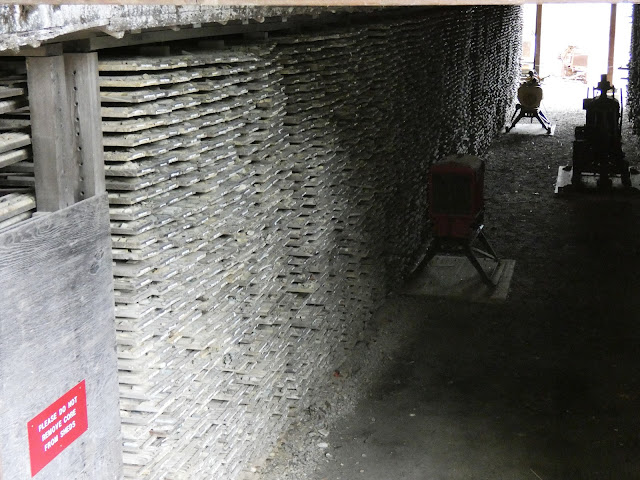 The interpretive signs even helped a bit in allowing students and tourists to look for the desired minerals in the cores (below). 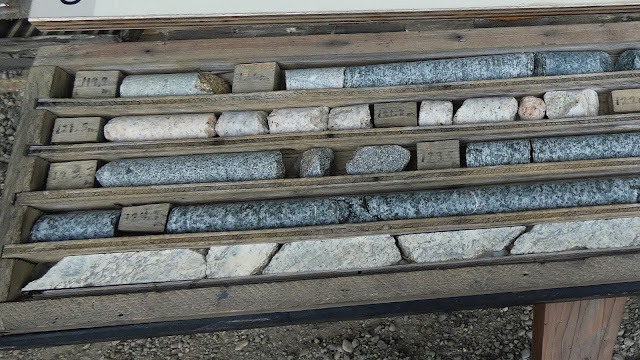 The last part of the tour was apparently debuted not long ago. They used a multimedia presentation showing how the ores were treated in the concentration mill. "Presentation" sounds kind of droll and boring, but it wasn't. There was some surprising humor, for one. I won't spoil all the surprises, but one incredible bit was how they played the sounds of the mill at the volume it would have been in real life. I was struck once again about how the miners would have suffered hearing loss whether they were employed underground or working in the concentration mill. 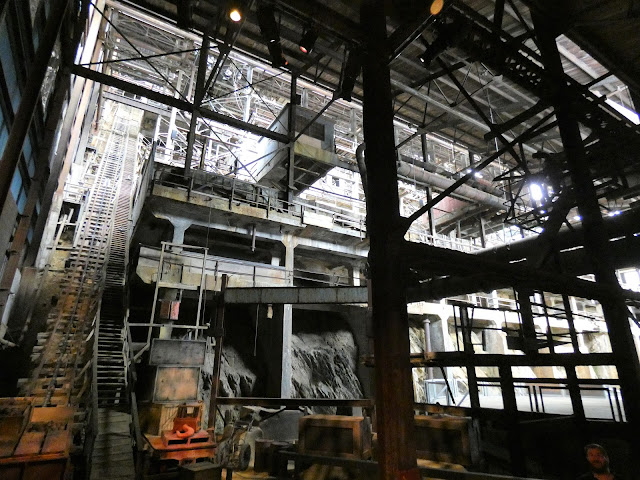 The concentration mill is big from the outside, but it actually felt even more immense from the inside. The effort that it took to separate the metal from the mineral ores is astounding. One comes away with an appreciation for the many ways that technology has made our collective lives easier. And it will make it harder for me to ever throw away a recyclable metal object. 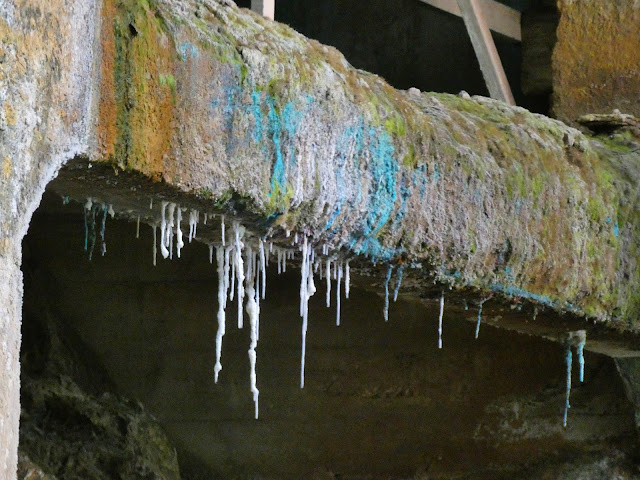 They allowed us to wander a little bit around the ground floor of the mill, and I was able to pick out something sort of unique. In the wet environment, copper carbonate stalactites have formed on some of the girders!

All in all, a great experience. If you are ever in Howe Sound, consider the tour at the Britannia Mine. Information can be found at https://www.britanniaminemuseum.ca/.
Posted by Garry Hayes at 6:22 PM

I was up there for the Vancouver Expo, in '86, I think. The concentration mill was falling apart, and had no windows. There were piles of cores all over the place. I had no idea this project was happening, and was shocked by the first photo. I also love mine tours, but at this point, walking is so painful that, even if I had a way to get there, I would probably opt out.

Fascinating history...although, with the exception of a relatively happy ending, it is a history that has played out in (former) mining communitities around the world. Big BOOM! Followed by ....bust. And pollution.