Travels in Cascadia: Howe Sound and the Challenge of Living in Vertical Places, Part 1


We have (slowly) been reviewing our geological exploration of British Columbia back in July, and when I last posted we had reached Howe Sound, the southernmost fjord on the west coast of North America. We arrived by ferry at Horseshoe Bay (from Vancouver Island), and then spent two days exploring the museums and parks of the city of Vancouver. But now we were headed into the interior, and needed to follow Highway 99 along the south side of Howe Sound.

Howe Sound is, as noted earlier, the southernmost fjord in western North America. A fjord is a glacially carved bay, and as such has nearly vertical rock walls sloping down to the waters of the bay. This kind of topography entails serious engineering difficulties for anyone who wants to live in, travel through, or mine in the fjord. Prior to the 1960s, the only form of transportation to the inlet of the bay at Squamish was by water. A railroad was completed between Squamish and Vancouver in 1956 (after a delay of something like 40 years), and the first iteration of Highway 99 was carved out of the walls of the sound between 1958 and 1969. When Vancouver was selected as the site of the 2010 Winter Olympics, the highway was widened to four lanes to provide access to Olympic venues in the Whistler area.

The development of transportation corridors led to the development of a few small towns and villages along the route. And that caused problems in this steep countryside. We stopped in the little village of Lions Bay to have a look at a perilous situation. 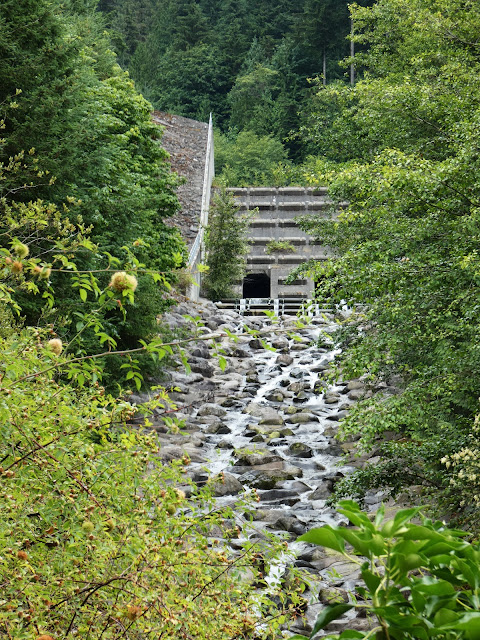 The dangers of the steep mountain slopes are clear. In 1915 and 1921 a short distance to the east at the Britannia Mine and Britannia Beach, mudflows killed nearly a hundred people. The community at Lions Bay faced the same danger, and in 1981 a debris flow took out highway bridges, leading to several fatal accidents. In 1983, boulders and mud roared down Harvey Creek, destroying a number of buildings and killing two people. 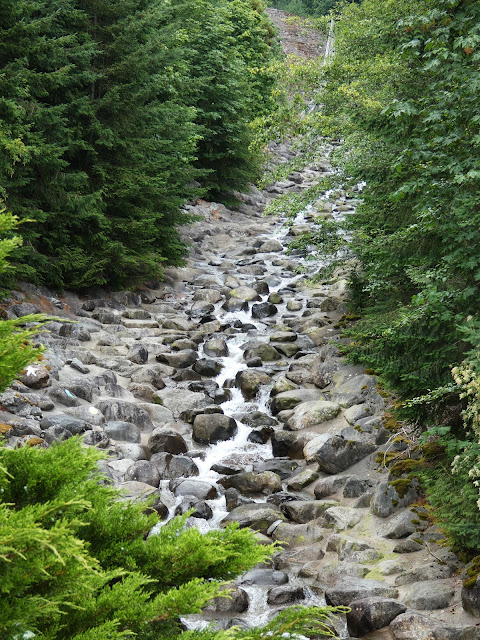 Thus it was that we were looking at a strangely shaped Harvey Creek as it appears today. The channel is lined with boulders, but they are cemented in place. Upstream, a dam is visible, but the dam has holes at the base, and is not capable of holding back water. It's not designed to store water at all, but to stop the forward movement of debris flows coming down Harvey Creek. 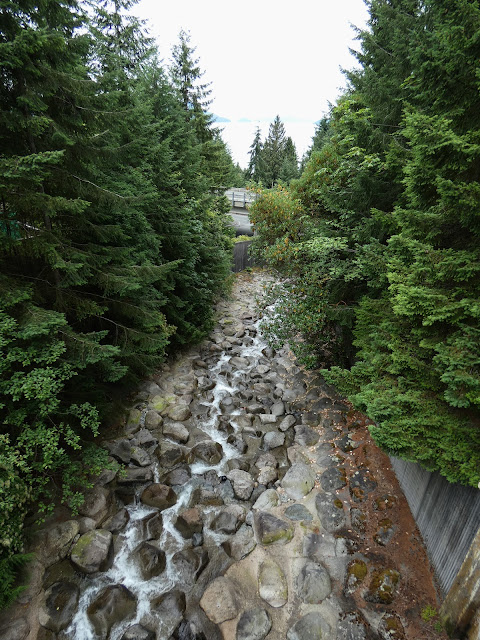 In our next post, we'll have a look at the Britannia Mine, the largest (and perhaps steepest) copper mine in western Canada.

For more details about the geology of the Sea to Sky Highway and the engineering challenges, check out: http://quimpergeology.org/wp-content/uploads/2018/03/Sea2Skytour.pdf
Posted by Garry Hayes at 6:48 PM