This one really got past me. I have to admit that the whole business of establishing a California State Dinosaur flew way under my radar. But it happened, Jerry Brown signed the bill, and Augustynolophus morrisi is our newest state emblem (along with our state fabric, denim). Although much of the attention on this Saurolophus species is directed towards two specimens found in the Panoche Hills of Fresno County in 1939-40, few people are aware of the story of California's first dinosaur discovery. It happened in 1936, and it was found in our own county of Stanislaus. I've written about this story before, so what follows is an abridged version.

OMG! Somebody caught Jar Jar Binks! Okay, not really. But what the heck is this thing?
Say hello (sort of, since my skull is a closely related species) to Augustynolophus morrisi, our newly designated official state dinosaur! 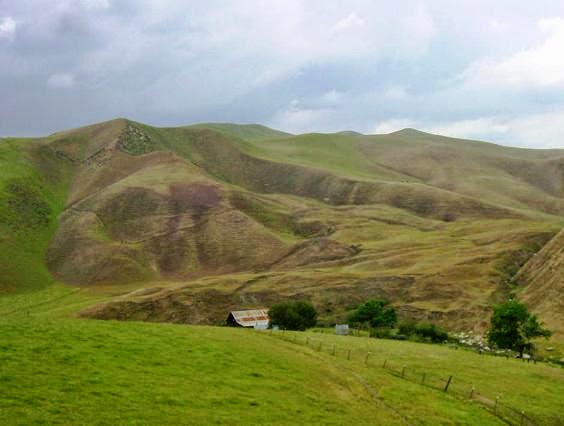 We have half a million people in our county, and I'm willing to bet that 99% of them don't know what it is or why it's important to them. Only one person got to be the first to find a dinosaur bone in California, and that was 17-year-old Al Bennison in 1936. He was exploring Del Puerto Canyon in the Coast Ranges along the western part of Stanislaus County looking for shell fossils when he found bones scattered on a slope. He showed them to his science teacher who reported them to the paleontologists at U.C. Berkeley. A year later Bennison discovered the most complete mosasaur skull ever found in California (see below). The mosasaur species even bears his name. It may not be much of a surprise that he went on to become a paleontologist. I had the privilege of meeting him in 1996, when he took us to his original discovery site, shown above. 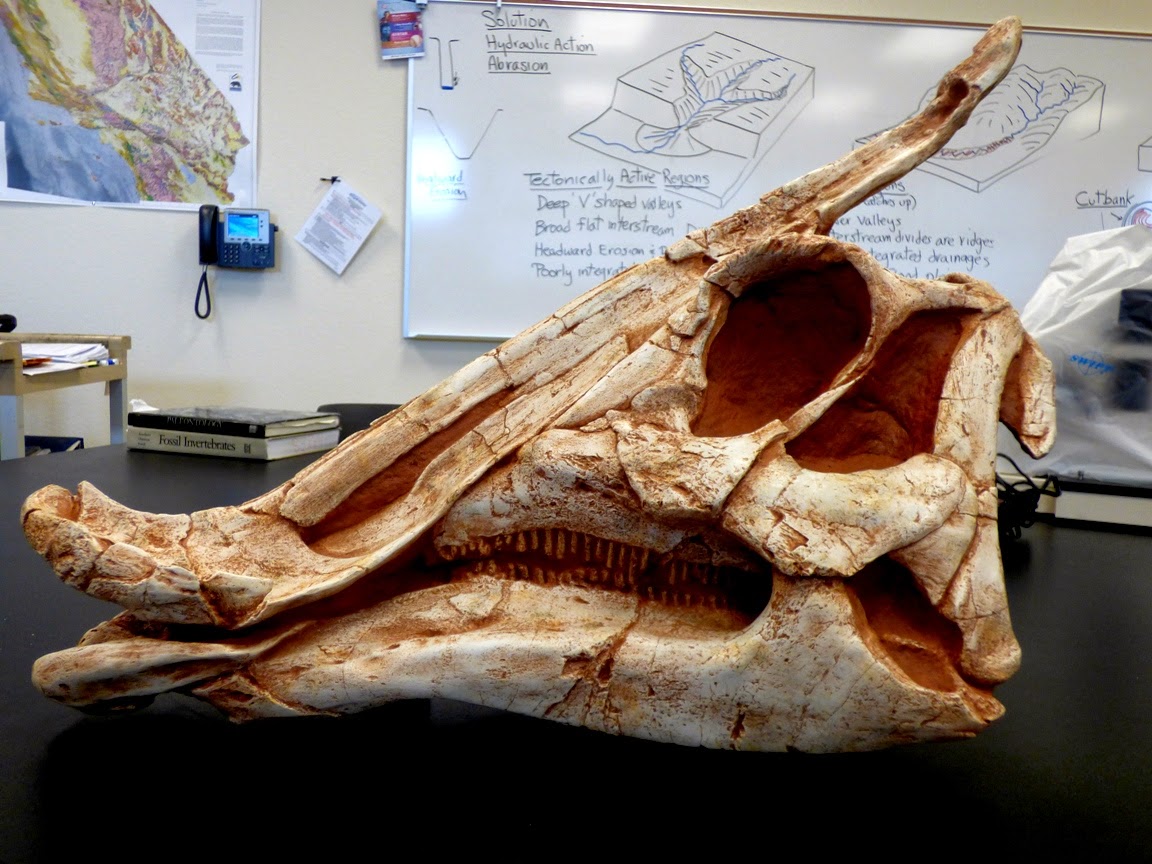 The Saurolophus was one of the last dinosaurs that ever lived on our planet, one the last groups in existence when the gigantic asteroid hit the planet (or when the volcanoes blew, or whatever else did them in). They lived in the latest part of the Cretaceous Period, which is well represented by sedimentary rocks in our region. The rocks are marine in origin, which tend not to be good places to search for dinosaurs, but sometimes a carcass would float out to sea.

The creatures were gigantic, on the order of thirty to forty feet long, weighing several tons. They were plant-eaters, with teeth well-adapted to grinding twigs and leaves. Whether they swam or not has been a topic of discussion and debate. Some argue that they had few other defenses from predators, so that swimming was necessary to escape from being eaten. Others suggest that they lived in herds that provided protection. 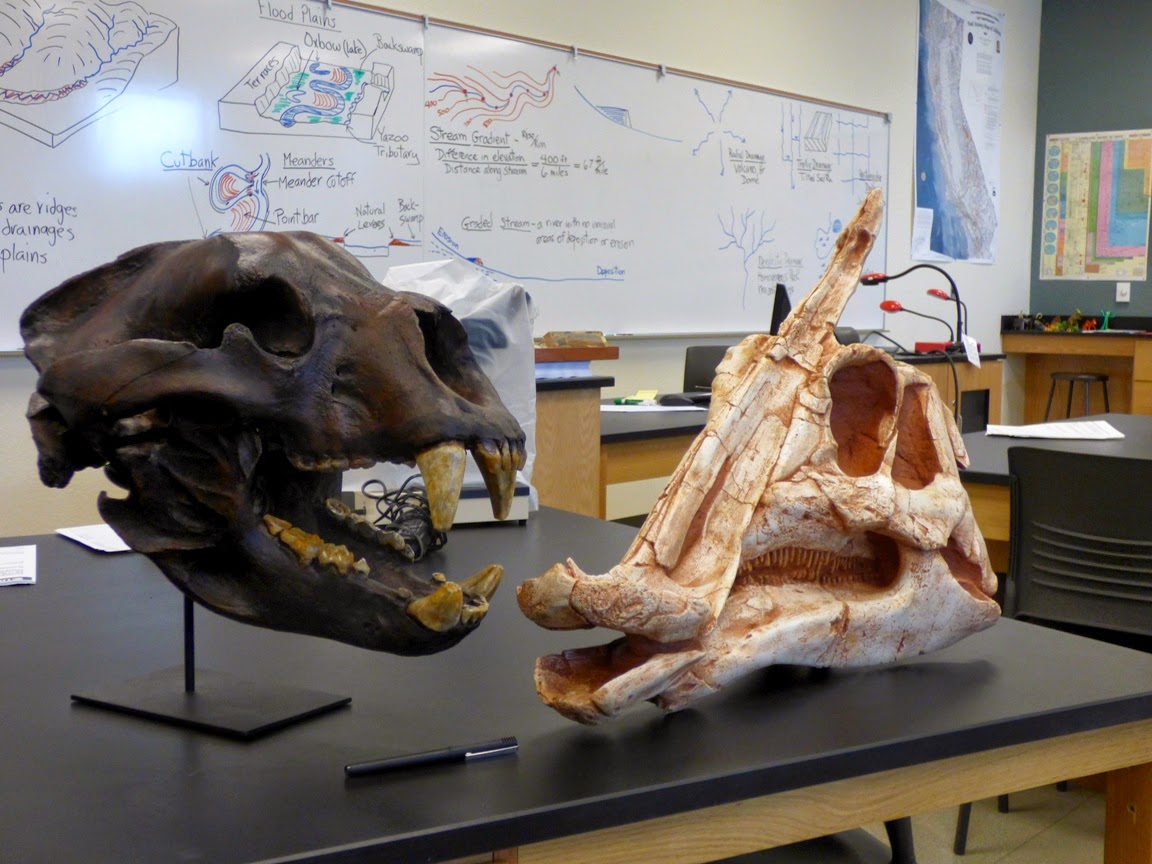 Our skull collection is now a powerful tool for teaching the students in our region about the heritage of the land that they live on. In the picture above, one can compare the Cretaceous plant-eater with the skull of a Short-faced Bear, which lived in our area during the Ice Ages during the last two million years. It may have been the single largest mammalian land predator that ever lived, with a standing height of 11 feet. It would have made a grizzly bear look small in comparison. 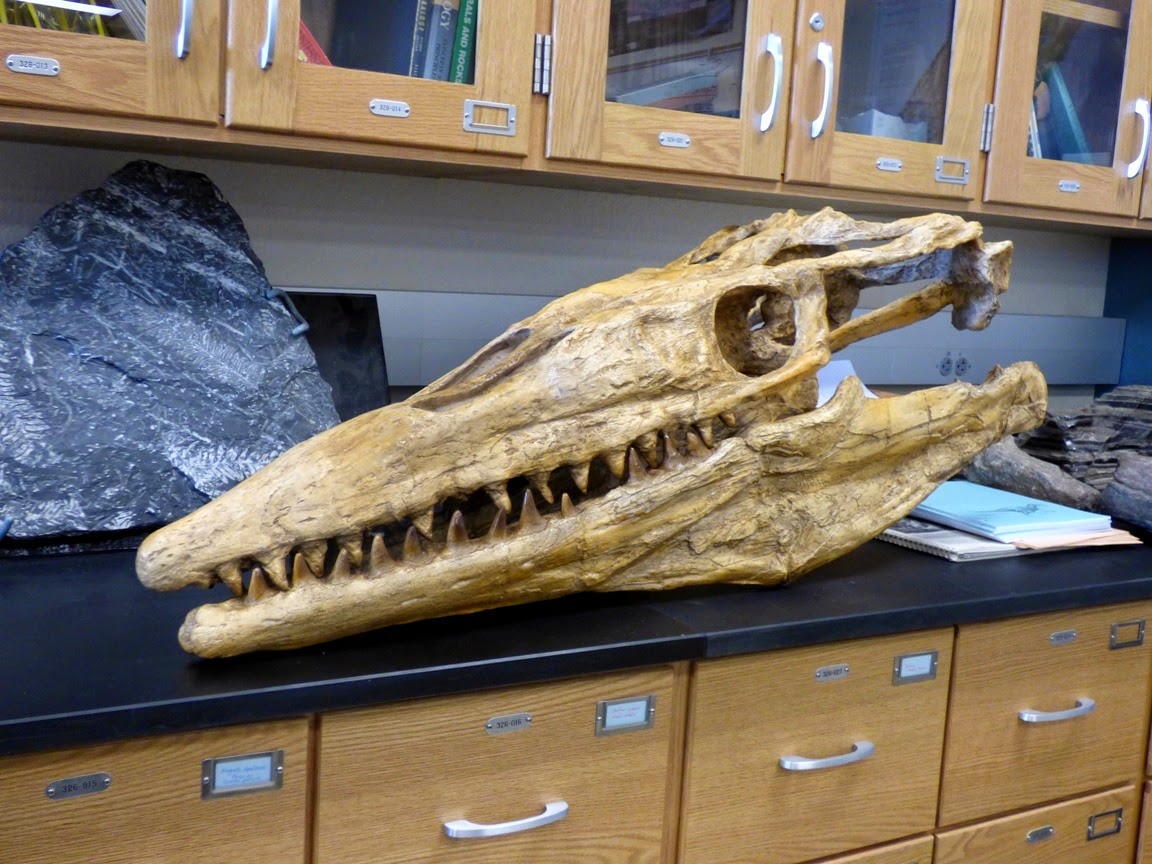 The picture above shows our other recent arrival, the Mosasaur, similar to the one found by Al Bennison during the 1950s in the Coast Ranges just south of our county. It was not a dinosaur but was instead a seagoing reptile from the Cretaceous Period that may have snacked on sharks. It was around thirty feet long. It is probably the most formidable predator ever to inhabit our region.
To give a sense of scale, we have the Mosasaur nosing an Ice Age Sabertooth Cat skull (the cats weighed 700 pounds), and one of those wimps of the early Cretaceous, Velociraptor (which came out of Mongolia, not the Americas).

Dinosaurs certainly capture the imagination of our children (and not a few of our adults), and it is a good thing for our students to know that our county played an important part in the paleontological discoveries in our state. When students realize that one of their own (however long ago) made an important find, they also can visualize themselves as a paleontologist or geologist making important contributions to science.

Augustynolophus has its own Twitter handle, so check out developments at https://twitter.com/augustynolophus/. The Wikipedia page has been updated as well. For the best source of information on dinosaurs and other Mesozoic reptiles of California, check out this book by Richard Hilton of Sierra College.
Posted by Garry Hayes at 3:41 PM