Liveblogging the Deluge: The First Day of Fall and a River Finally Returns to Abnormal 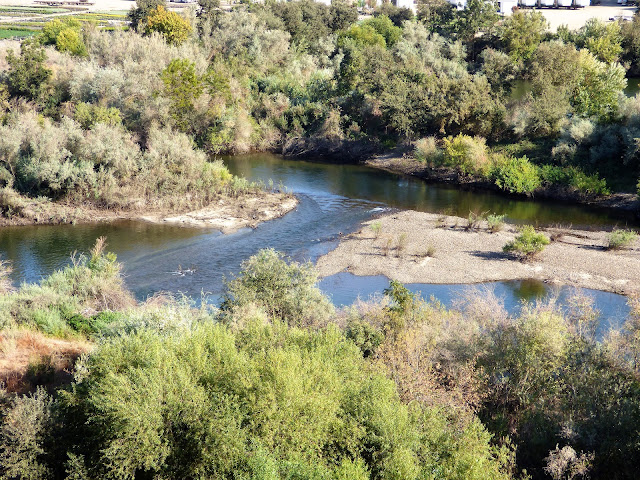 I was mistaken. Nearly two months ago, I suggested in a post that the abnormally high flows on the Tuolumne River were finally subsiding, and that the great flood of 2017 might finally be ending. This happened because I strolled along the river on a day when the output from Don Pedro Reservoir finally fell below 5,000 cubic feet per second, to around 1,500 cfs. That lasted for an entire day or two. The inflow at Don Pedro was still several thousand cfs, and the effort to build up some emergency flood storage space in the reservoir meant that they ramped up flows to 5,000 cfs, and that level continued for another seven weeks.

I walked the river again today and saw something I haven't seen in nine months: a river at very close to minimum mandated flow. A quick check of the river gauge on the USGS site confirmed that the river was flowing at a mere 339 cubic feet per second. A look at the table above shows how the flow has been declining over the last week. 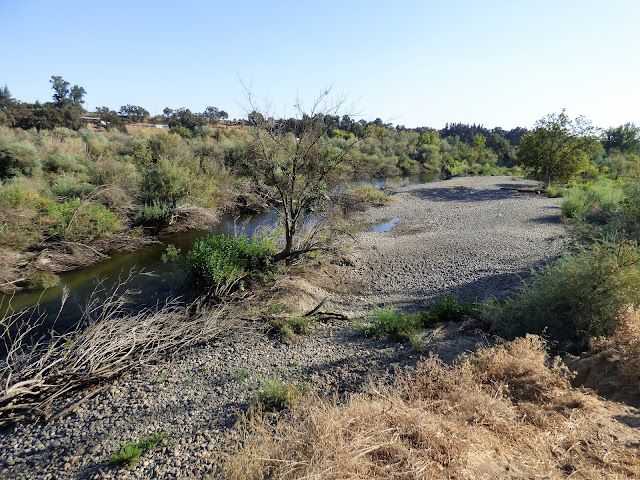 The CDEC site for Don Pedro Reservoir is even more informative, showing high flows throughout August and early September. Inflow to the reservoir finally dropped below 1,000 cfs about the 12th of September, and the outflow was then also lowered (about 1,500 cfs is diverted for irrigation which accounts for the discrepancy between output from Don Pedro and the river flow below LaGrange Dam where the diversions take place).


Don Pedro Reservoir remains well above normal in water storage after an extremely wet year of precipitation. It presently holds 1.7 million acre-feet, about 84% of lake capacity, and 126% of normal for this time of year. The floodplain is a different place now, compared to what it was a year ago. The biggest change is the vegetation. Hundreds, maybe thousands of trees and shrubs have been uprooted and washed away downstream. There are huge piles of branches and tree trunks across the riverbed. Other areas along the streambed have been washed clean of any vegetation at all, leaving vast tracts of barren gravel and pebbles. The invasive and damaging water hyacinth is gone, carried downstream in the many months of flooding. One can only hope that the seeds were carried away as well, although they probably weren't. I'll be pulling any hyacinth out of the river that I see in coming months. 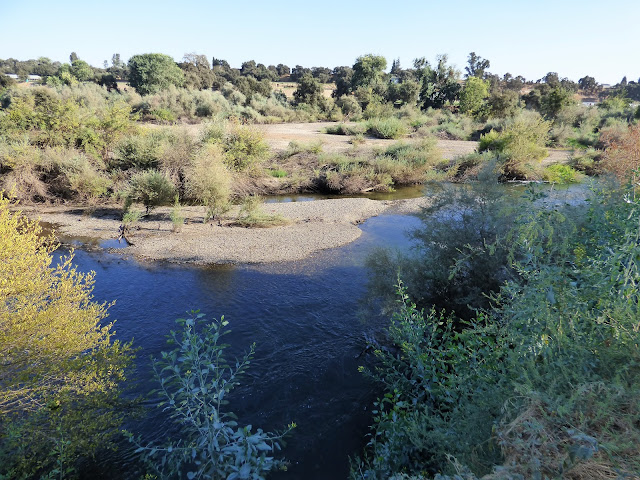 The river is not back to normal, because "normal" disappeared more than a century and a half ago when gold was discovered upstream. The original channel and floodplain was upended in the search for the elusive metal. Trees and shrubs were removed, and every bit of gravel was run through sieves, longtoms, or dredges. After the search for gold ended, quarrying for gravel and sand took over, further altering the floodplain, ultimately forming numerous ponds fed by groundwater seepage. 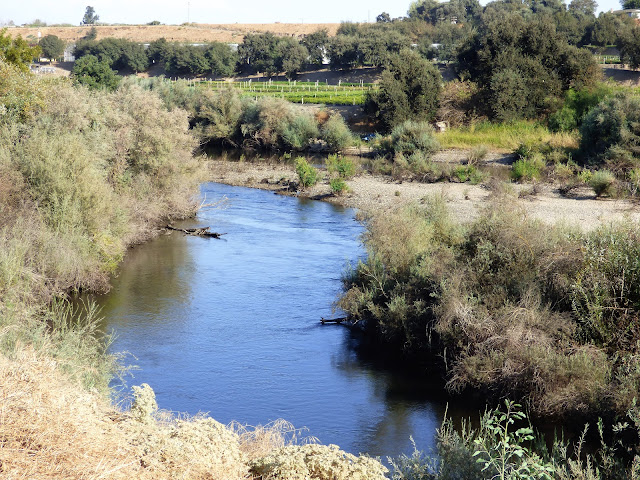 These days, efforts are being made by organizations like the Tuolumne River Trust to bring about some sort of natural balance on this badly scarred landscape. Adjustments to the channel can help expose the gravel bars that salmon need to spawn, and one can hope that the fall run will be more successful than those of the last five years during the drought. Only the Merced River has a more southerly run of Chinook Salmon. At one time 130,000 salmon cruised the Tuolumne. In the last decade, the run has exceeded 1,000 only once (1,926 in 2013).

In the meantime, the flood of 2017 seems to finally have subsided. The river is back to abnormal, and we now await the new storm season. After a monster season in 2017, one has to wonder what the coming year holds in store for the river.
Posted by Garry Hayes at 10:03 PM

What would the river have looked like before development? How high would the water have gotten, in the massive short lived flood that would have happened?

A natural channel would have a meandering stream flowing through a wide flat woodland wilderness instead of a series of stagnant ponds. I posted video of the 1997 flood, when the river reached 70,000 cfs (the high flow this year was about 16,000, regulated by the reservoir; inflow to the reservoir reached about 45,000 this year). The flood filled the entire floodplain as one might expect. The post can be seen at http://geotripper.blogspot.com/2017/01/liveblogging-deluge-perspectives-on_10.html