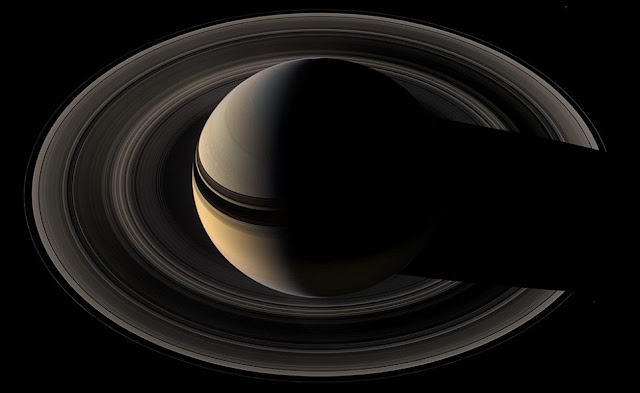 Amid the stupidity emanating from Washington D.C. these days, depression can be a real impediment to a happy life. Other events unrelated to politics give me some sense of hope about the future of humanity, and one of those things is drawing to a close this week: the Cassini-Huygens mission to Saturn. It is one of humanity's greatest accomplishments, the extended exploration of another planet in our Solar System. I want to offer my congratulations and appreciation to the team that made this mission possible.
Have a look at this summary of discoveries from NASA; it has some astounding images. 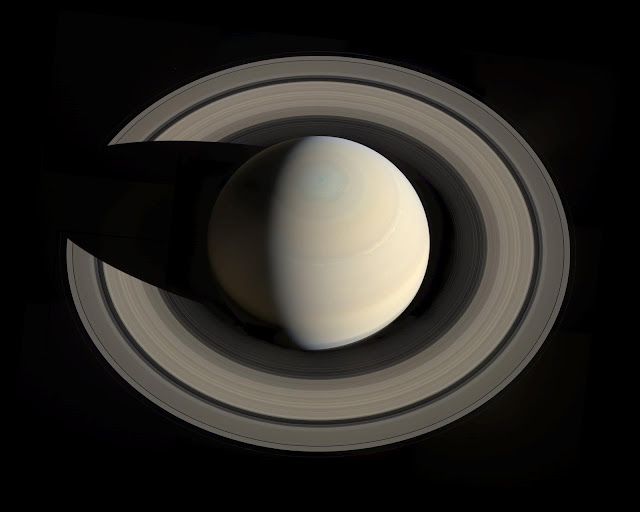 This incredible mission resonates with me in a special way. I was a child of the 1950s, and the world and the Universe were different places in so many ways for a kid who was fascinated by astronomy. In particular, we barely knew more about our own Solar System than we did a hundred years earlier. We had made larger telescopes, but their effectiveness was limited by the disturbances in the upper atmosphere that distorted high magnification images. In those primitive years before the Hubble Space Telescope and the Voyager satellites, the science of astronomy was an exercise in frustration. I would head to the library week after week, checking out every astronomy book in the stacks, hungering to understand our own Solar System.


How little we knew! Venus was shrouded in clouds. Mars had visible features, but they were unidentifiable from earthbound telescopes. Jupiter and Saturn had some visible cloud bands, but their moons were simple points of light. Only Saturn had rings, and maybe three divisions were visible. Neptune and Uranus were small disks, and diminutive Pluto was a dot of light. I wanted to know more! 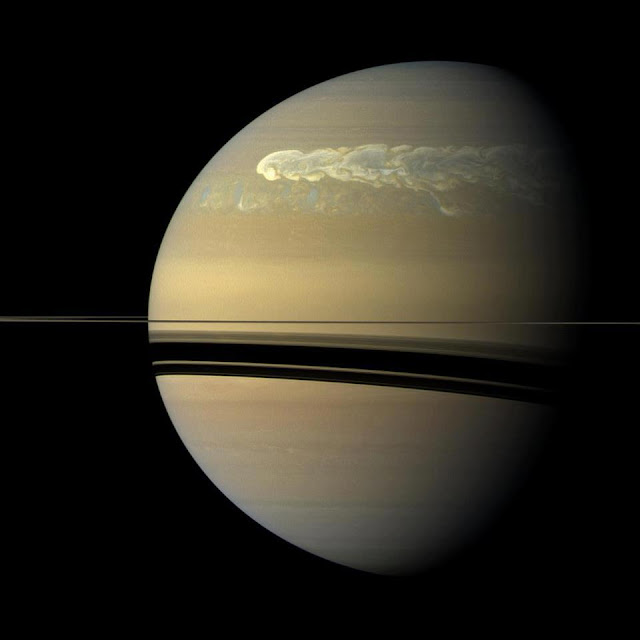 The advances came so slowly (at least to this young growing child). The first satellite missions to Mars in the 1960s revealed surface features (and a lack of alien civilizations). Pioneer swept past Jupiter, but the camera on board was relatively primitive by modern standards. In the late 1970s, the two Voyagers began the grand tour of the outer gaseous planets. It was an excruciating wait as the small satellites passed first Jupiter, then Saturn, followed by Uranus and Neptune (years passed between each visit). Then, knowing the satellites had arrived, there was the excruciating wait for the pictures to be downloaded and processed. It was worth the wait. The pictures and data were astounding, revealing worlds never imagined by humans. The child in me was absolutely enchanted. But something still seemed to be missing.

The missions were all fly-bys. The trajectory was carefully planned to glean as much information as possible, but the satellites flew past their targets fast, and the numbers of pictures were limited by both time and technology. What was really needed was to insert a satellite in orbit, and that is a daunting challenge. The Cassini-Huygens mission accomplished that task in a spectacular manner. Check out the "ball of yarn" below...satellites can only maneuver to a very limited degree because of fuel requirements, so the crew had to aim the craft with an extreme degree of accuracy.

The pictures of the clouds and bands of Saturn are spectacular enough, but the real adventure of the Cassini-Huygens mission has been the exploration of the rings and moons of Saturn. Six new moons were discovered and named, bringing the total of known moons to 62, second only to Jupiter's 69. In essence, Saturn is a planetary system with one "planet" that is larger than Mercury.
George Lucas could barely come up with stranger moons for his Star Wars movies than the very real moons we have in our Solar System. More than enough of them are somewhat like our own Moon, cratered and "dead" (i.e. geologically inactive). But some are...very different. It turns out that Titan, the largest, has a thick atmosphere complete with rivers and streams, lakes and even a few seas. It rains and snows. That might seem a bit odd, since the surface temperature is hundreds of degrees below zero, but the liquid isn't water. It is made of hydrocarbons that on Earth would exist as gases like methane.
Another major moon of Saturn, Enceladus, is even stranger, if that is possible. It's the brightest object in the Solar System aside from the Sun itself. The reason is ice. The entire crust of the "planet" is made of water ice, and it covers a "molten" layer below of salty water that may be four or five times deeper than Earth's oceans (Enceladus is much smaller than Earth, only about 310 miles in diameter).
The fractures and cracks in the surface, along with a relative lack of craters suggests the surface of Enceladus is tectonically active. It is simply one of the most fascinating "worlds" in our Solar System. And when I was growing up, all it was to us on Earth was a barely visible dot of light in our most powerful telescopes.
Saturn is full of wonders and mysteries that are now becoming apparent to human beings for the first time in all our existence as a species. What a privilege to be living in a time when things like this can happen! And what a privilege and honor it must be to be part of the team that made the entire mission possible. And what competence! The Cassini-Huygens satellite left Earth nearly twenty years ago, and the moment it left, no repairs would ever be possible. When I consider how often my laptops and smartphones have to be replaced or repaired, just think what it means to be the inventor and maker of a complex piece of technology that has operated for twenty years with barely a glitch in performance.
So what now? It's going to take years to interpret and present the scientific discoveries concerning Saturn, and the data will inform the objectives of future missions to the planet. But what to do in the meantime? Well, there's another really big planet out there, and a new satellite just arrived and started its explorations. It's called Juno, and the planet it is exploring is Jupiter. Jupiter has now had a number of fly-bys (Pioneer 10 and 11, and Voyager 1 and 2), and it also had an orbiter mission (Galileo). Galileo provided a treasure trove of information, and the Juno will be able to build on that (it also has a more polar orbit, providing views that the other missions could not). In other words, this very wonderful human adventure continues.
So thank you, and congratulations to the team that gifted us with the Cassini-Huygens mission to Saturn. Tomorrow, the Cassini satellite will plunge into atmosphere of Saturn at a ludicrous speed (echoes of "Spaceballs") of about 75,000 miles per hour and go out in a literal blaze of glory after 13 years of collecting data. It will be transmitting information right up to the final seconds of its existence. It was a job well done.
Posted by Garry Hayes at 9:03 PM

I'm with you Garry. I'm in my mid forties and grew up curious but a little dissatisfied with the planetary images at the time. The mid-life grind is assuaged by the amazing Hubble photos and planetary probes. We can see the surface of Pluto! There's an event at Caltech Monday night celebrating the Cassini probe and I can't wait to attend.