I had kind of a schizophrenic (split-brain) response in regards to what I wanted to accomplish with this post. A couple of weeks ago while still in Hawai'i, I did a post on what I considered the ultimate wilderness on planet Earth, the nearly lifeless high-altitude basalt flows of Mauna Loa on the Big Island. At first, as a follow-up, I was thinking of the idea of how life finds a way to propagate even in the most barren settings. As I went along though, I started to think about how rock is destroyed, and how often life has something to do with the destruction. Whatever way this post decides to go, the unique Hawaiian tree Ohi'a Lehua (Metrosideros polymorpha) is going to have something to do with it.

The Ohi'a is one of the most remarkable tree species on the planet. The Latin name polymorpha ('many shapes') provides a clue why: it can grow in a stunning number of deeply contrasting environments. Ohi'a trees can be found as the first pioneering species on fresh lava flows, as in the pictures above. They can be found on the near-desert leeward slopes of the island's volcanoes. They form the canopy of most of the island's rainforests, growing to heights approaching 100 feet (30 meters). They grow in near alpine conditions at 8,000-9,000 feet on Mauna Loa and Mauna Kea. And stunted trees, barely shrubs, survive in the high altitude bogs on Kauai where the rainfall exceeds 300 inches a year. I know of no other tree species that is capable of such feats.

It's true that you could try and cultivate Ohi'a trees in these kinds of environments elsewhere in the world and they might not do very well in competition with other established species. On Hawai'i, though, all they have to do is survive, because the isolation of the islands has meant that only a handful of other tree species ever arrived. So it is that in the unending battle between rock and life in Hawai'i, the Ohi'a tree is often the main combatant. 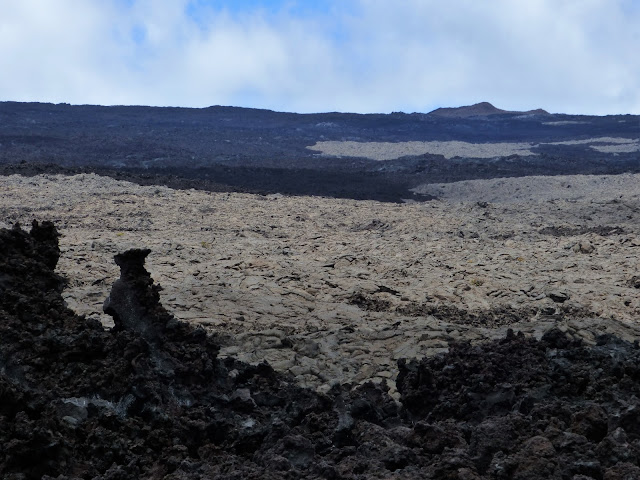 The Ohi'a trees aren't entirely alone as colonizers of barren landscapes in Hawai'i. The ʻŌhelo ʻai (Vaccinium reticulatum) is a shrub that can be found on new cinder cones, ash fields, lava flows and alpine slopes. The berry is edible, and is a treat for the nēnē, the native Hawaiian Goose. The geese in fact have a lot to do with spreading the seeds in the inhospitable environments of volcanic landscapes (they leave the seeds in their droppings). I'm trying to think of any other plant or shrub that produces mature fruit when it is only an inch or two high (as in the picture below).
There are a number of native fern species as well, growing in the most inhospitable environments I can imagine. Those below are growing in a pit on the flank of Mauna Ulu, which came into existence during a series of eruptions from 1969 to 1974. 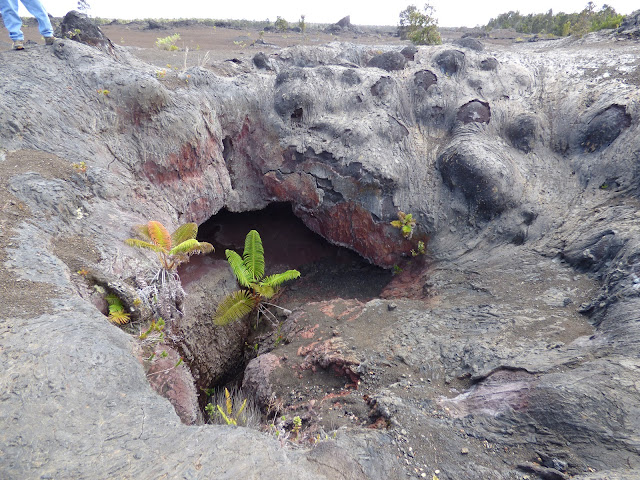 And then there were the "furry rocks" I saw on Saddle Road at the pass between Mauna Loa and Mauna Kea. The mosses and lichens survive on the surface of the rock itself, and draw out nutrients directly from the minerals. The acids produced by the plants contribute to the alteration of the basalt to various clay minerals that end up producing pockets of soil that support numerous other plants. Forest succession eventually produces mature rainforests over time (at least with the cessation of constant lava flows as some of the volcanoes go dormant). 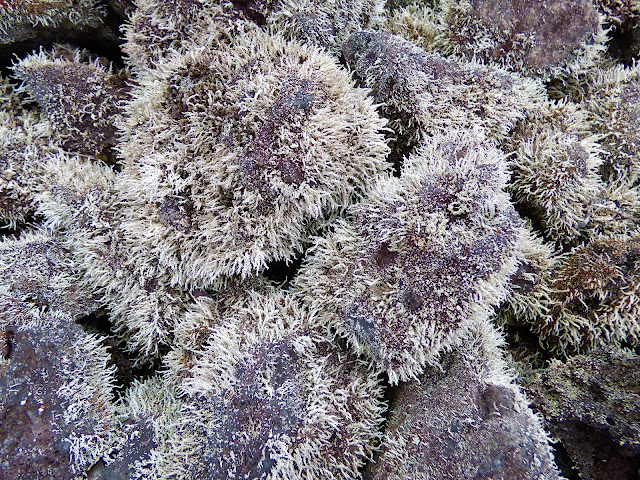 I guess "life finds a way" ended up as the predominate theme as I wrote. I was musing, though, about those high slopes of Mauna Loa at 11,000 feet where I saw no visible life. All the normal ways that rock is destroyed don't seem to apply up there. There are no plants to aid in the production of soil. There are no rivers to carry away sediment (any water seeps into the cracks and fractures of the lava flows and emerges far downslope). There are no glaciers. Snow falls on both Mauna Loa and Mauna Kea, and there were glaciers thousands of years ago, but they have little influence in the present day (one of the talks at the conference I attended concerned the permafrost at the summit of Mauna Kea). Waves can't attack the rocks until the islands have subsided enough, a process taking millions of years. Mass wasting has little effect on the gentle slopes of the giant shields, although gigantic megaslides eventually destroy the flanks of the volcanoes and ultimately lead to their destruction. The barren lava fields on the high flanks of Mauna Loa seem permanent until one realizes that they will no doubt be covered by new lava flows in a matter of decades or centuries. And when the volcano goes dormant or extinct, time (and life) will indeed destroy the rocks.