Driving Through the Most Dangerous Plate Boundary in the World: At the Portal of Hell in the Diablo Range

I miss the tabloids sometimes. Sure, there's the Onion, which gets mistaken for real news sometimes. But there was nothing like standing in the grocery store lines perusing headline after headline of "real" news, like Elvis sightings, UFO reports, and "Loch Ness Monster Meets Yeti" stories. On extended field trips when group morale was slipping a bit, I could pick up a copy of one of those tabloids and read stories around the campfire, and it worked like magic to bring a group out of the doldrums.


One story has stuck in my mind over the years, the one about the Russians (or Alaskans, or Norwegians) who were digging the world's deepest well on the Kola Peninsula in Russia (or on the North Slope, or in Scandinavia) and when they reached a depth of 7 miles (or 9 or 12), the drill started spinning wildly, and they measured temperatures of 2,000 degrees, but scariest of all, they lowered a microphone (into the 2,000 degrees...) and heard the unmistakeable sounds of screaming souls in Hell. In some versions, gases rose and took the form of the devil, and...well, you get the general picture. As can be seen from the link at the start of the paragraph, the story spread so widely that it merited a Snopes article. What does it tell you that some people (including one or two of my students) took this seriously?

In any case, we are back on our journey through the most dangerous plate boundary in the world, and when we finished our last episode we had passed through the Franciscan Complex, the rock unit that formed in the accretionary wedge of California's Mesozoic subduction zone. We are now making our way down the eastern margin of the Diablo Range through the gorge of Del Puerto Canyon. The association of "Diablo", and "Puerto" ("Devil" and "Portal") is what brought to mind the "screams of the damned" in the old tabloids. 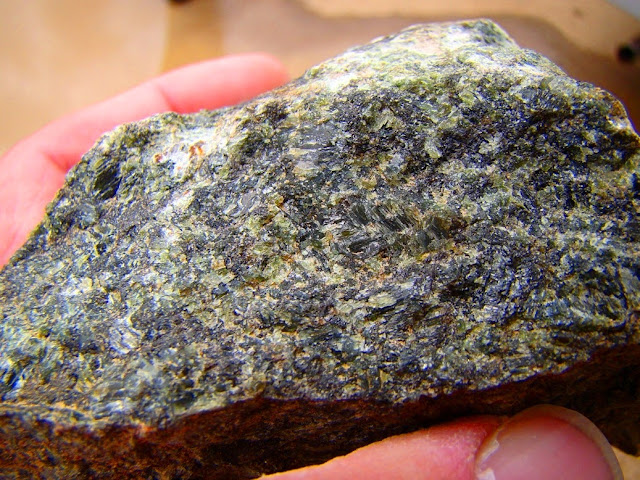 The geologists were trying to dig a hole into the deep crust. They wanted perhaps to break through the continental crust and into the underlying mantle, a layer of peridotite and other ultramafic rocks that make up about 80% or so of the Earth's volume. They failed, but what an effort they made! The thing is, if one really wants to reach the mantle, there is an easier way: find the places where the mantle has risen to the Earth's surface. And that's what happened in Del Puerto Canyon.

As we travel down this canyon we are going to do the literal equivalent of traveling from the Earth's mantle upwards through four or five miles of the oceanic crust, and then "climb" through 25,000 feet of oceanic sediments. All while coasting down a pleasant country avenue in one of the most scenic of the Coast Range's canyons. Along this journey we will also finally leave behind the accretionary wedge of the Franciscan subduction zone, and enter into the intriging forearc basin. 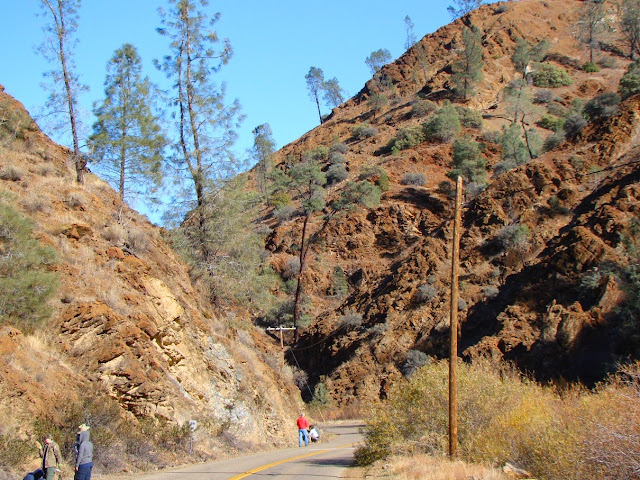 The ultramafic rocks of the upper canyon host a number of unusual minerals and ores. Among them are mercury and chromite. The mercury mined here was used in the process of separating gold from the tailings in the Mother Lode on the other side of the Great Valley. As I understand it, one could make very good wages mining the mercury, but you didn't last long at the job. The mines literally killed the miners. For them, the tunnels really were the portals of Hell. The mercury vapor in the air got into their nervous system, first destroying their minds, and then their bodies.

The chromite that was mined in the upper canyon was not nearly so dangerous. Chromite is of course the source of chrome, which most people associate with shiny car accessories. The most important use of the metal is much more pervasive: it is a major component of stainless steel. The United States usually imports cheap ores from overseas, but during periods of war domestic sources were exploited, and that's what happened in the upper part of Del Puerto Canyon. The road we are traveling was once a railway that serviced the mines.

There is a large quarry face in the upper canyon where the rocks can be readily observed. The unweathered rock is dark in color, but weathers readily into an iron oxide rich patina. The region came to be known as the Red Mountain Mining District. The ultramafic rocks are very poor in important in plant macronutrients, and also contain some toxic elements as well. The vegetation on the slopes reflects the difficulty of surviving in this poisonous chemical environment. A number of the species found here are endemic to California and the Coast Ranges. And few invasive species ever gain a roothold on these slopes. 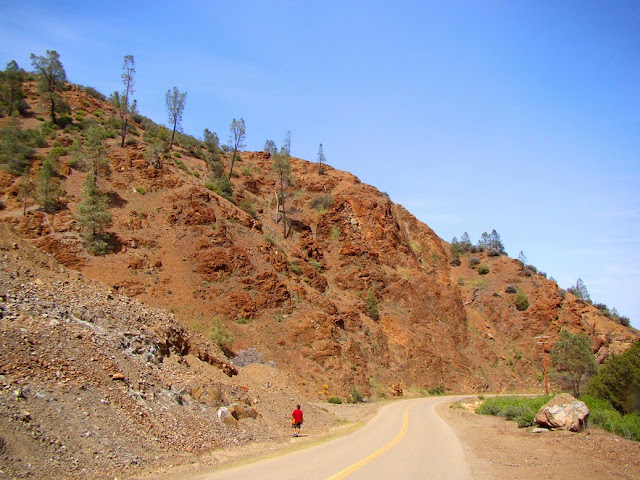 Next, we'll see if we can find the oceanic crust, the rock sequence known as the Coast Range Ophiolite. Stay tuned...
Posted by Garry Hayes at 1:12 AM

Amazing views of geological features! I am a petroleum engineering student and we were studying about geology in general and we've studied about plate boundaries but I haven seen one before, though we have one here in kurdistan region between Iran and Iraq.
I really appreciate the sharing of such things! thank you,

More (though not much more) on the railroad line is at: http://www.abandonedrails.com/Patterson_and_Western_Railroad

It's a vein or dike of quartz and calcite that I guess is hydrothermal in origin, probably in relation to faulting.