Driving Through the Most Dangerous Plate Boundary in the World: The Sea Floor that Became the Greatest Agricultural Region on Earth 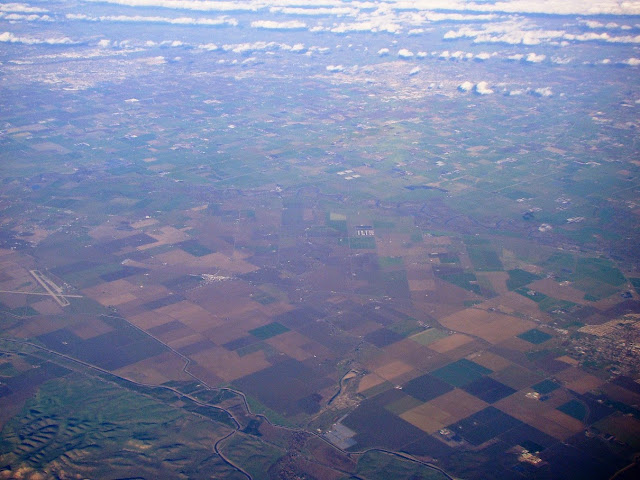 Welcome to one of the strangest places on the planet! It's the size of West Virginia, but flatter than the Mississippi River Valley. It was once America's Serengeti, but 95% of the original landscape has been altered. It originated as the bottom of a sea, but now grows most of the nation's produce, and practically all of the nation's walnuts, almonds, and pistachios. It has been a major oil and natural gas producer. It is the Great Valley of California. 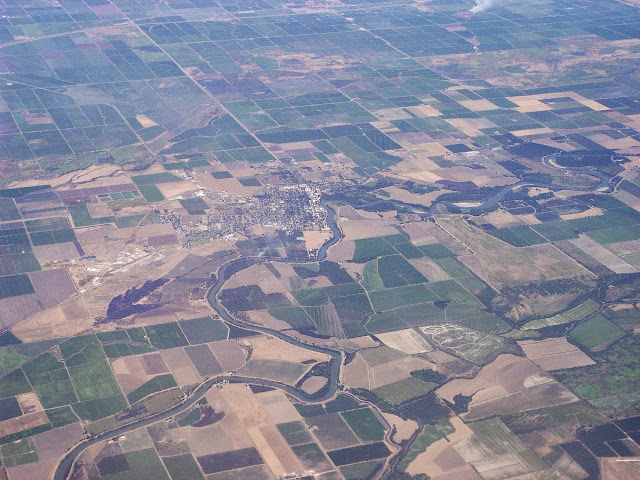 The Great Valley originated as a forearc basin, the seaway that is sometimes present between an oceanic trench/subduction zone and the margin of the continent. Tens of thousands of feet of sediment were deposited between the Jurassic Period and the mid-Cenozoic. As noted in the last post, the sediments have yielded up a fascinating collection of fossils over the years, including mosasaurs, plesiosaurs, ichthyosaurs, and even the fragmentary remains of a few dinosaurs. The valley was a seaway for the better part of 200 million years.

It is no longer a seaway. In the last few million years, California's tectonic framework underwent huge changes. The subduction zone was extinguished in the central and southern parts (subduction continues in the north state). A new plate boundary emerged: the San Andreas transform fault. Compressional forces along bends in the fault line raised the Coast Ranges, and the seaway of the Great Valley slowly gave way to river deltas, and then alluvial fans. In the last five million years, the Great Valley has been a terrestrial environment, with numerous river channels, gigantic lakes and vast grasslands. Large herds of grazing animals wandered the plains, pursued at times by terrifying predators (look for them in the next post of the series). Countless millions of birds made use of the wetlands during their long seasonal migrations. 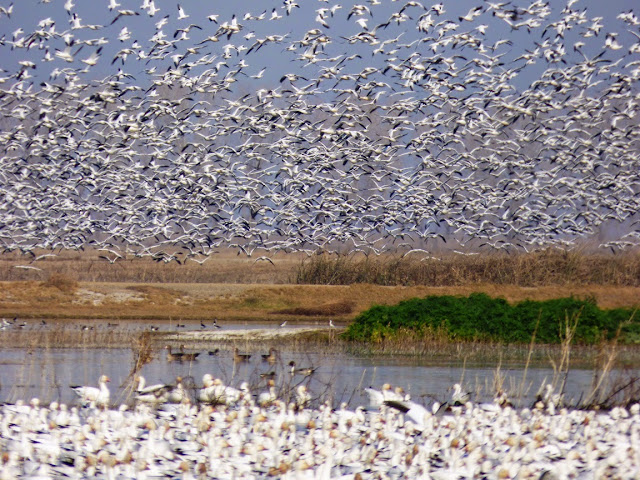 The biggest and most far-ranging change in the Great Valley during the last five million years may have been that which took place only in the last 150: agricultural development. Millions of acres of grasslands, lakes and wetlands were drained and plowed. The rivers were dammed and diverted into artificial watercourses that took them hundreds of miles from their natural channels. Thousands of wells were drilled that brought prehistoric groundwater to the surface. Parts of the valley subsided thirty feet or more as the water was withdrawn. A mere 5% of the valley floor retains its natural character. Most of the animals are gone, shot to extinction (the California Grizzly Bear, for instance), or pushed to marginal environments in the Sierra Nevada or the Coast Ranges. The migratory birds are crowded into a few precious wildlife refuges up and down the valley. 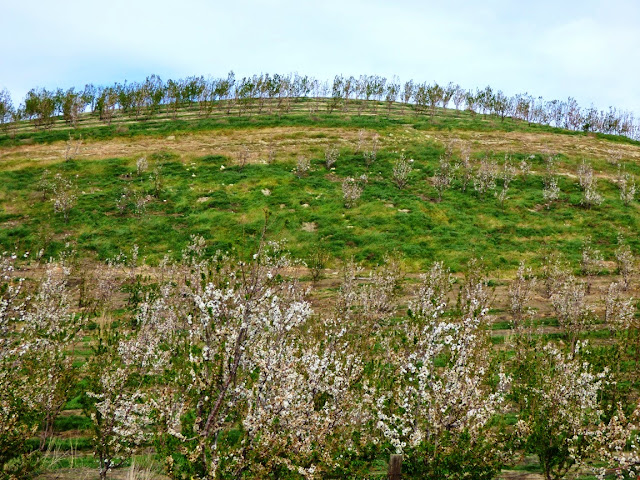 I'm not really writing this to criticize the agricultural development of the valley. We have billions of people on the planet, and they insist on eating, so it would be foolish not to utilize some of the richest soils on the planet. I would even suggest to people who don't live in the valley that they might have a bit more respect for the people who work hard for low wages to plant and harvest the food that you eat. On the other hand, we do a lot of things wrong in our approach to agricultural development, and the waste of water is one of those things. The ongoing four-year drought has exacerbated the problem. There are problems with the overuse of pesticides and antibiotics, and with agricultural waste disposal. In many ways we are fouling (and paving over) our nest.

Still, living here does have some benefits. Given our journey through the most dangerous plate boundary on the planet, the Great Valley doesn't exactly look geologically menacing. It is relatively far away from the most active earthquake faults of the state, and is even farther away from the most dangerous of the state's volcanoes. We don't get hurricanes, violent thunderstorms or blizzards, and tornadoes are exceedingly rare. The idea of dangers from landslides is laughable (except that I know of at least one fatality in Modesto caused by a slide). But we do have two threats: droughts and flooding.We are in the midst of the worst drought in recorded history, but with the development of an El Nino weather pattern in the Pacific, we could have catastrophic floods in only a few months. We can never really predict what can happen. In 1861-62 the floods were widespread that the state capitol had to be removed to San Francisco for a few months. The valley was a gigantic lake twenty miles wide in places.

The map below shows what could happen if we get a repeat of the 1861-62 floods, an event the meteorologists call an atmospheric river storm (ARKStorm). They also refer to this as the "other big one", because the potential for damage is greater than that of a major earthquake, at least in the Great Valley. 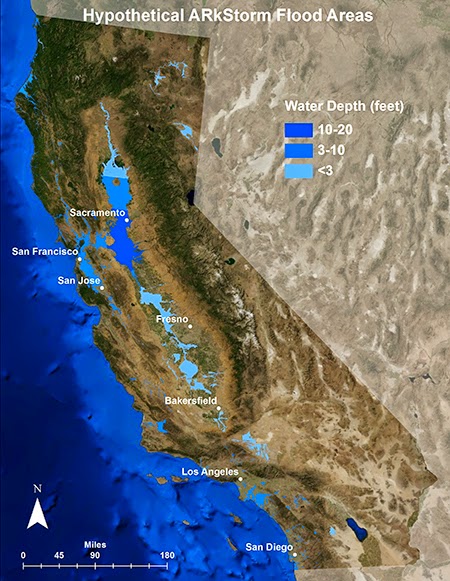 In the Great Valley, geology conspired to transform a sea floor into the richest agricultural region on the planet. For all the flat lands, it is an interesting place to study. In the next post we'll take a look at the strange things we've found just beneath the surface. In a garbage dump of all places.

Interesting ARKstorm map. Another thought is sea level rise. A meter or so (likely by later in the century) probably won't be a big deal if the levee builders keep up, but 10? How about 30 or 40? Loss of some big ice sheets (or Greenland?) could kick things up that much. The Valley starts to look like an inland sea again in those circumstances. For fun, think about that and read Burrito Justice's series of the Islands of San Francisco (after a 200' sea level rise). http://burritojustice.com