Driving Through the Most Dangerous Plate Boundary in the World: Exploring the Oceanic Crust Without Unobtainium 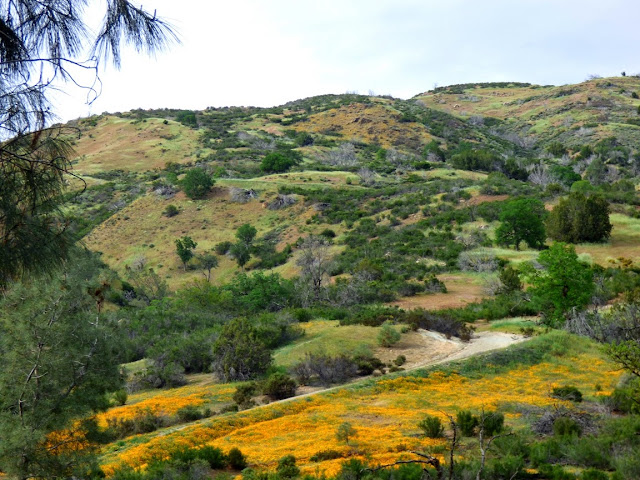 One of the movies I most love to hate is "The Core". There are plenty of ridiculous parts, there are several earnest geologist characters, there are the many gory deaths while the heroes save planet Earth from being severely microwaved or something like that, and there is of course unobtainium, the magical element that makes everything else possible, including "Avatar". But mostly I scream at the end when the heroes make it though the oceanic crust at the "plate boundary" near Hawaii. Just like physicists yelling "you can't hear explosions in space", I yell "there's no plate boundary at Hawaii". But there is oceanic crust, and it is very hard to explore. In fact most oceanic crust is pretty much inaccessible except by the use of expensive drilling rigs at sea, and they haven't penetrated the deepest parts of the crust yet. Oh, and unobtainium doesn't really exist...
The thing is, we can explore the oceanic crust, and for us in Central California, it involves simply driving up Del Puerto Canyon in the portion of the Coast Ranges called the Diablo Range. We began our exploration in the last post of our series about driving through the most dangerous plate boundary in the world. We were journeying through the depths of hell as represented by the peridotite and serpentine of the Earth's mantle. That portion is in the uppermost parts of the canyon. As we descend towards the Great Valley, we make our way through a section of oceanic crust called the Coast Range Ophiolite. 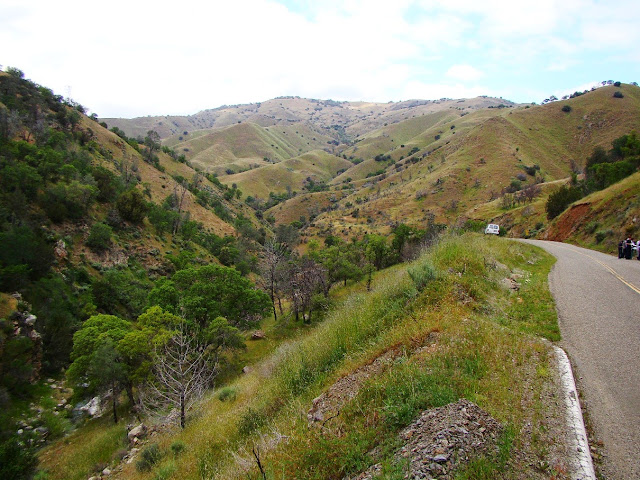 We saw some elements of an ophiolite sequence while we explored the Marin Headlands in this post a few weeks ago. The big difference is that the rocks of the Marin formed a few thousand miles from the California coast as much as 200 million years ago. The Coast Range Ophiolite is thought to have originated much closer to the margin of the continent around 140 million years ago. 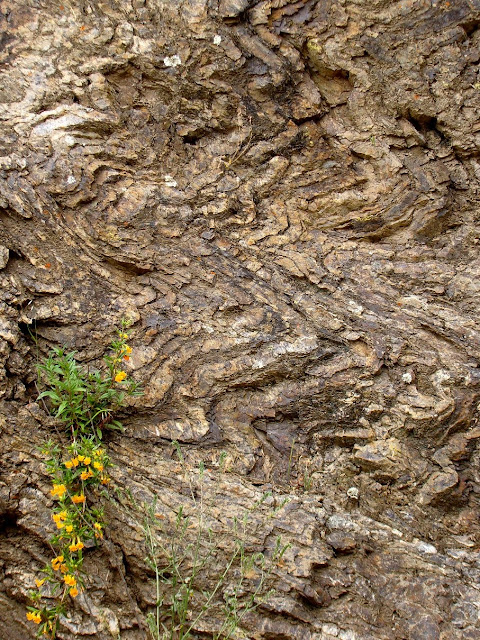 The upper canyon has some nice exposures of highly contorted deep-sea chert similar to those of the Marin Headlands (above), but pillow basalts are a bit harder to find in Del Puerto Canyon. Other parts of the oceanic crust are well-represented however. Pillow basalts form during eruptions onto the sea floor. The rocks of Del Puerto formed much deeper in the crust. The eruptions of basalt on the sea floor were fed by numerous sheet dikes in the mid-levels of the crust, which were in turn supplied by plutons of basaltic magma that later cooled slowly to form gabbro plutons. Gabbro looks like no other rock in the coast ranges (below). 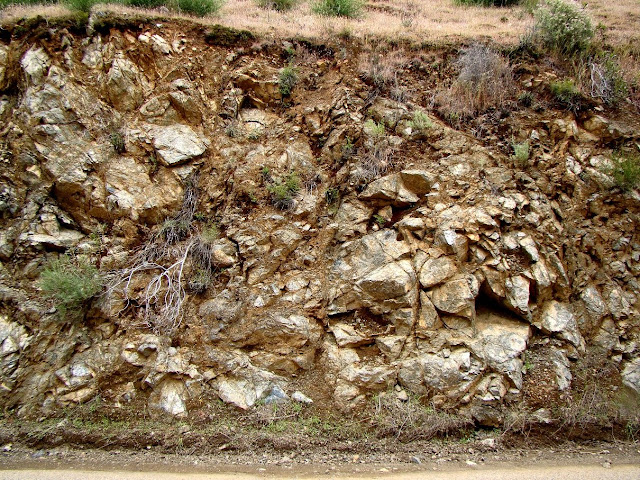 The blocky exposures reveal a rock full of mafic (dark iron-rich) minerals. The "black granite" of many stone countertops is not granite at all, but gabbro. The gabbro of Del Puerto is somewhat finer grained than most rock used in countertops, but under a microscope it is very pretty. It often contains small crystals of green olivine (the gemstone peridot). 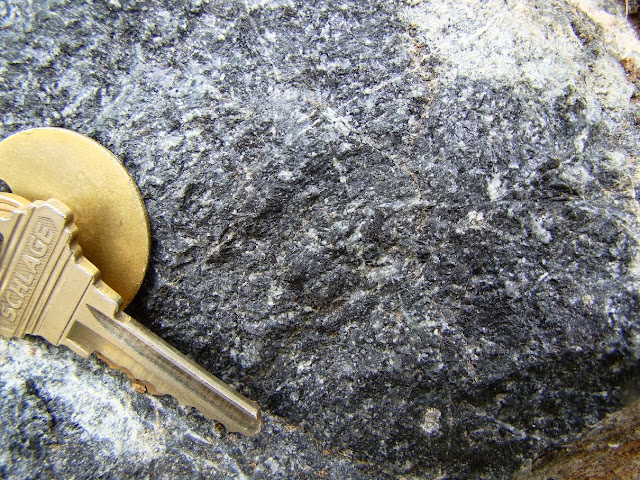 The gabbro exposed in the middle part of Del Puerto has been split by a quartz-rich dike that captures the attention of most canyon travelers. It is probably related to hydrothermal fluids (hot water solutions) developed during faulting and uplift of the range. 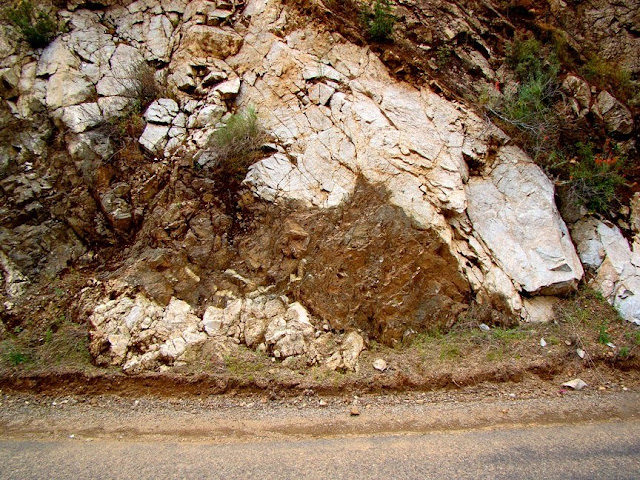 The quartz vein is very resistant to erosion and forms a wall of rock running up the cliff. It has caught the attention of gold seekers, although I am unaware of any economical ores in the region. This hasn't stopped the speculators. The vein was recently staked for mining, even though no one has found anything there in 90 years of easy access to the outcrop. 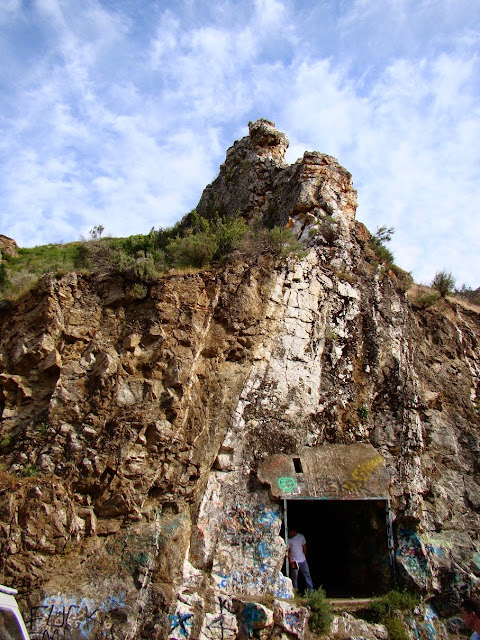 This stretch of the canyon gets a fair amount of precipitation and reasonably good soils develop on the slopes. Some water is usually present on the valley floor all year. The vegetation is some of the most diverse to be found anywhere in Coast Ranges, and several hundred bird species have been sighted in the canyon at one time or another. 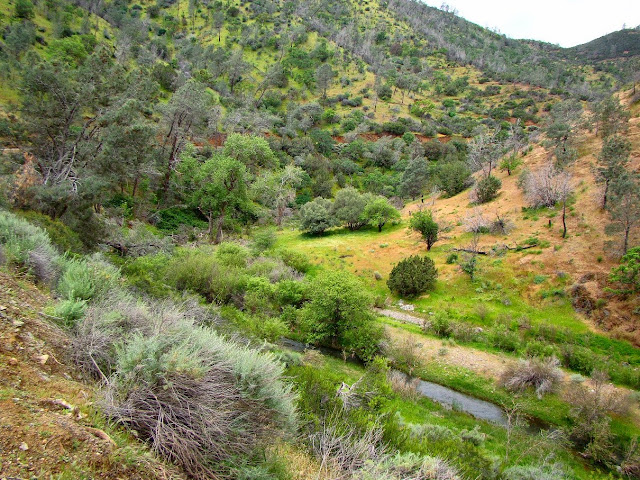 The sediments of the Great Valley Group were deposited on the Coast Range Ophiolite. The boundary between the ophiolite and sedimentary rocks along Del Puerto Canyon road is a fault, the Tesla-Ortigalita. It's a little hard to see in the photo below, but note the color change in the rocks from lower right to upper left. Some years ago, about 1996, I stood here with Al Bennison, who as a child discovered the first dinosaur ever found in California. He went on to a career in paleontology, and mapped much of the region. He mentioned that the shale on the right side of the fault sometimes yielded up ammonite fossils. He walked over, looked at the rock a moment, then pulled out an ammonite specimen. I have gone back to that exposure a dozen times or more, staring for hours at the rocks, hammering away, and I have never found one. 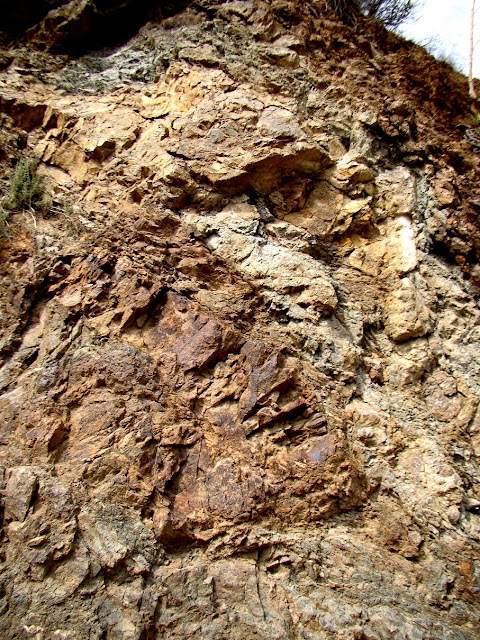 A final note about exploring Del Puerto Canyon. It is a marvelous habitat for many wonderful creatures, but there are some that one may enjoy better from a distance. In 2008 we saw this rattlesnake. 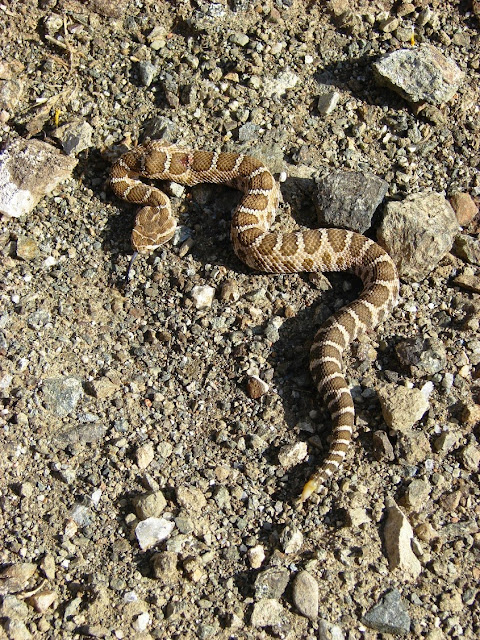 And in 2012 a flipped rock revealed this small arachnid. Explore carefully! 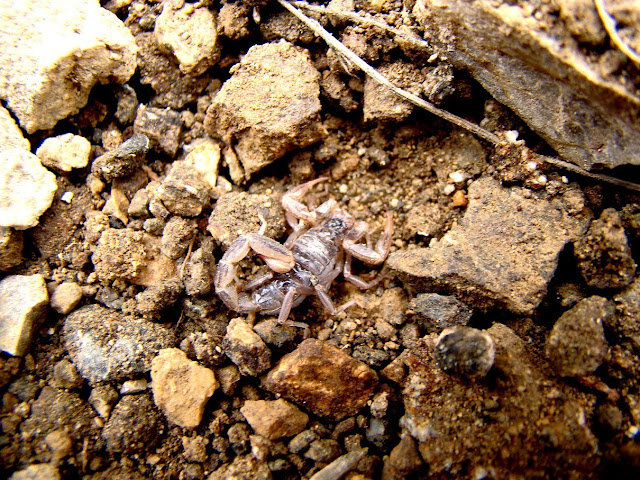 This post is part of a continuing series about the ancient subduction zone complex exposed in Central California. It is no longer active as such, but once was a zone of earthquakes, tsunamis, volcanoes and many dinosaurs must have perished when it was active in Mesozoic time. For a preview of the series, check out this original post for the series.
Posted by Garry Hayes at 1:30 AM

Hi, I have a question about the highly contorted chert, imaged in this section, and the physical processes that could produce such plastic folding of supposedly deeply buried, cold, marine sediment layers. I have been puzzling over this phenomenon as we see the same sort of contorted chert (the black and white rocks) in the Merced River canyon near El Portal. What physical processes could produce this sort of folding without completely melting or transforming the chert into a molten rock that recrystallizes in a new form? Conversely, how can the deformed layered chert retain its layering without being hopelessly crushed and fractured? Weren't these layers still soft and wet when this pressure was applied?
Kyle

I can't claim expertise, but I think the chert hardens through diagenesis and recrystallization while still buried on the sea floor crust. The rocks were later folded under great pressure deep in the subduction zone which preserves the overall continuity of at least some of the layers, but most chert exposures that I am familiar with are intensely fractured and often shot through with veins of other minerals.

Thank you for taking time to reply! One of the fascinating aspects of geology (as well as other fields of science) are the investigative and deductive tasks we face in our interpretation of what is observable today. It's quite humbling having to interpret our Frankenstein part of the earth :) Please make some updates as soon as you get your hands on a time machine!
Kyle
PS: The waterfalls are really gushing right now in Yosemite.