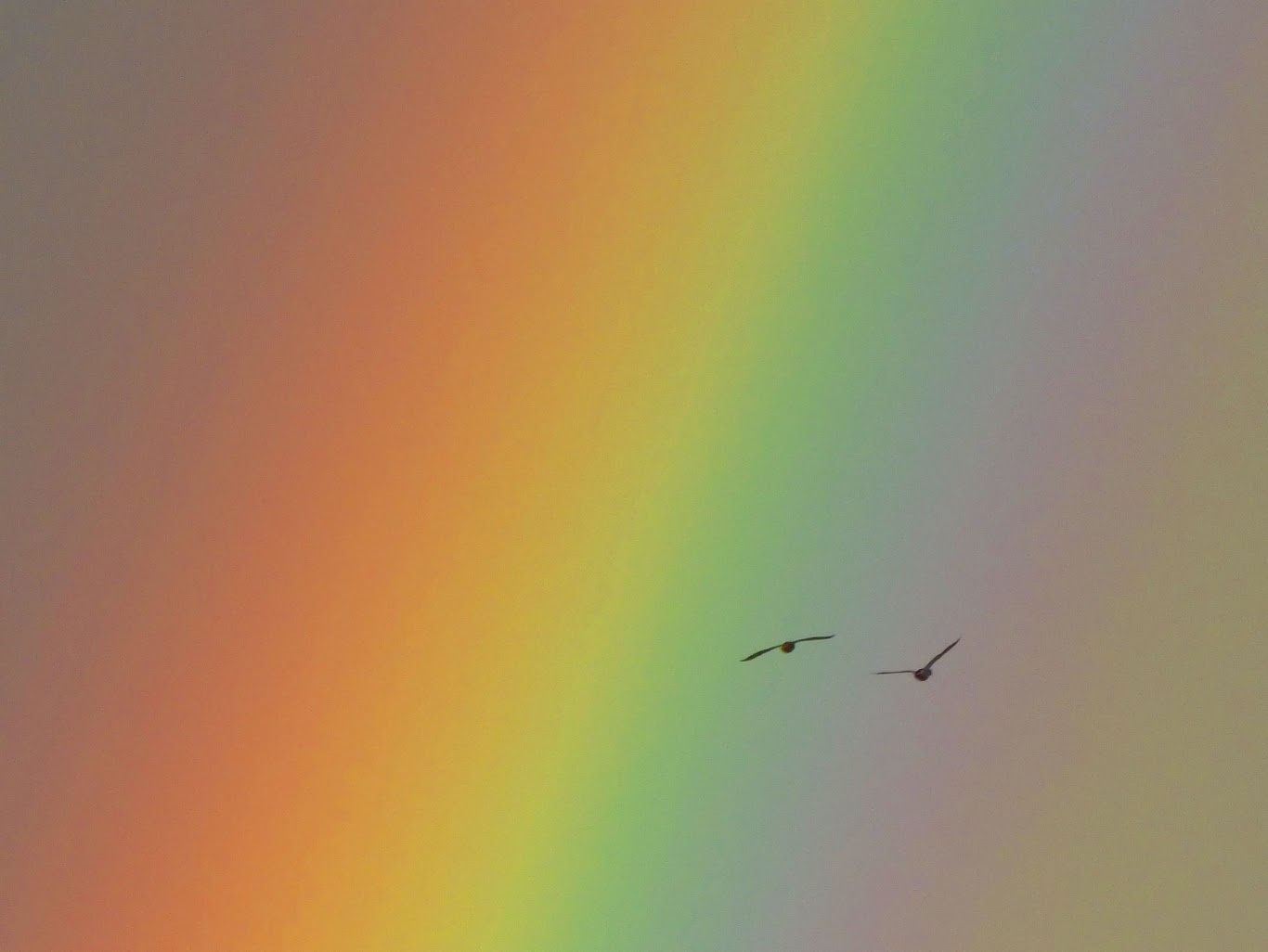 What does it take to make a Walmart parking lot pretty? Atmospheric phenomena is a big help. I spend as little time as possible at Walmarts of any kind, but there was a fast food outlet nearby, and we wanted to eat something before shopping at WinCo, a store that apparently treats their employees with a bit more respect (they own it). Politics aside, for four minutes we were treated to a spectacular rainbow. 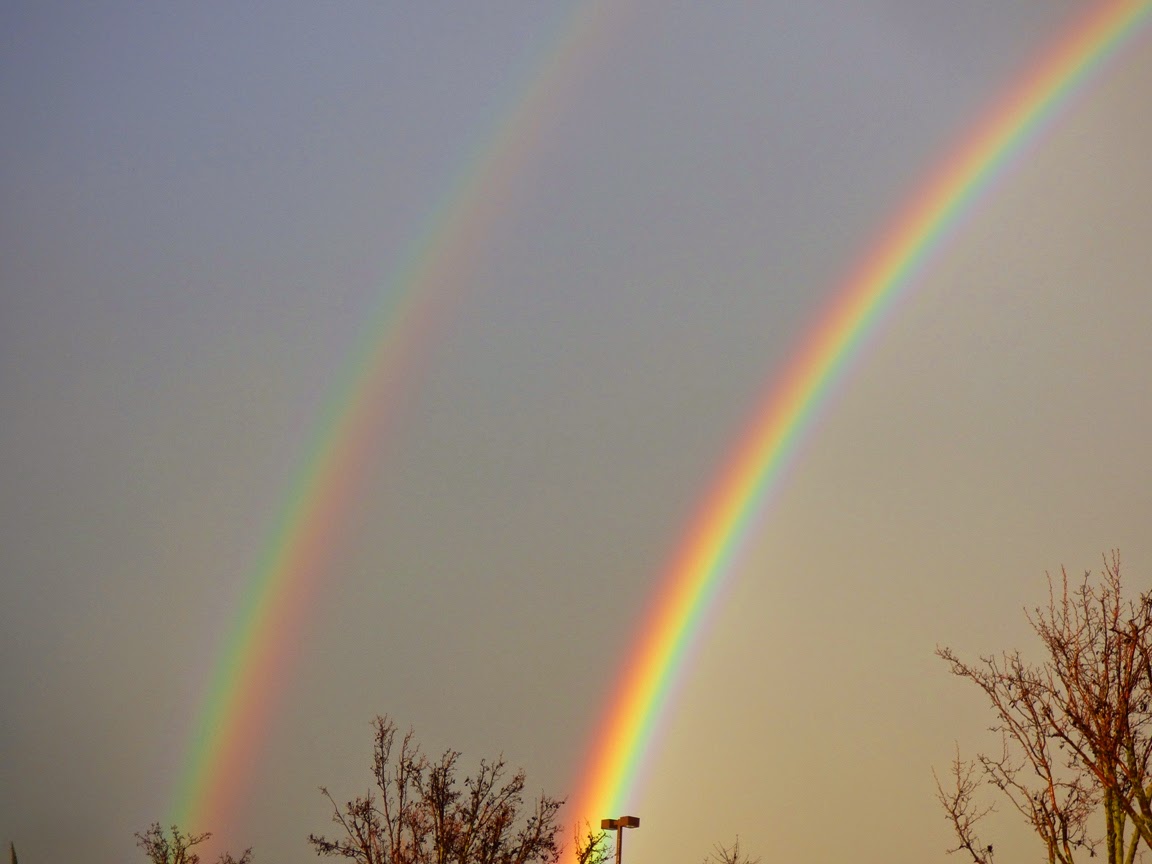 The rainbow was a particularly welcome one. It came on the heels of a real gully-washer today, which capped three days of rain, the first precipitation following an unprecedented dry spell of more than forty days. We had not a drop of rain during the entire month of January. 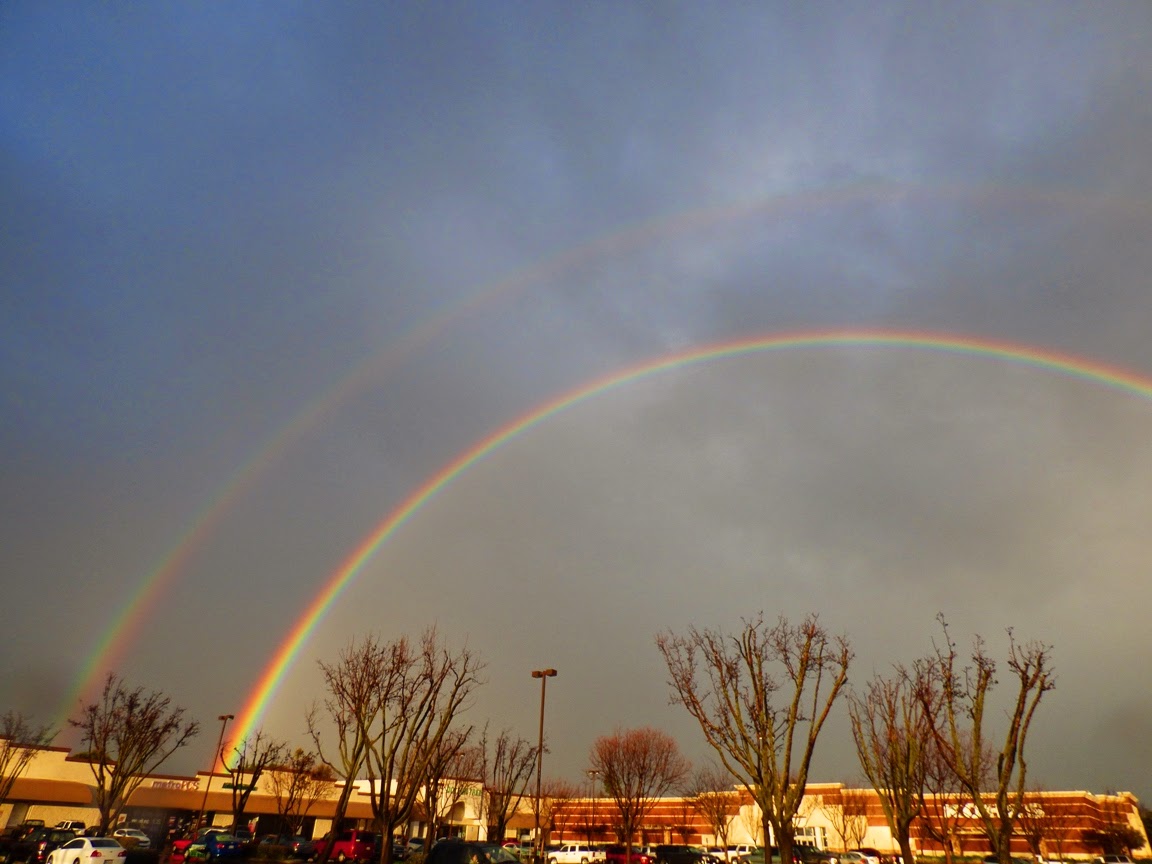 The three-day long stormy period provided a good example of something that scientists and statisticians like to describe as the difference between accuracy and precision. Weather forecasting has become somewhat more precise and accurate over the years, but it is sometimes more of one and less of the other. The forecast called for 0.64 inches of rain on Friday, 0.02 inches of rain on Saturday, and 0.43 inches of rain on Sunday. These values, to the nearest one-hundredth inch, are quite precise. 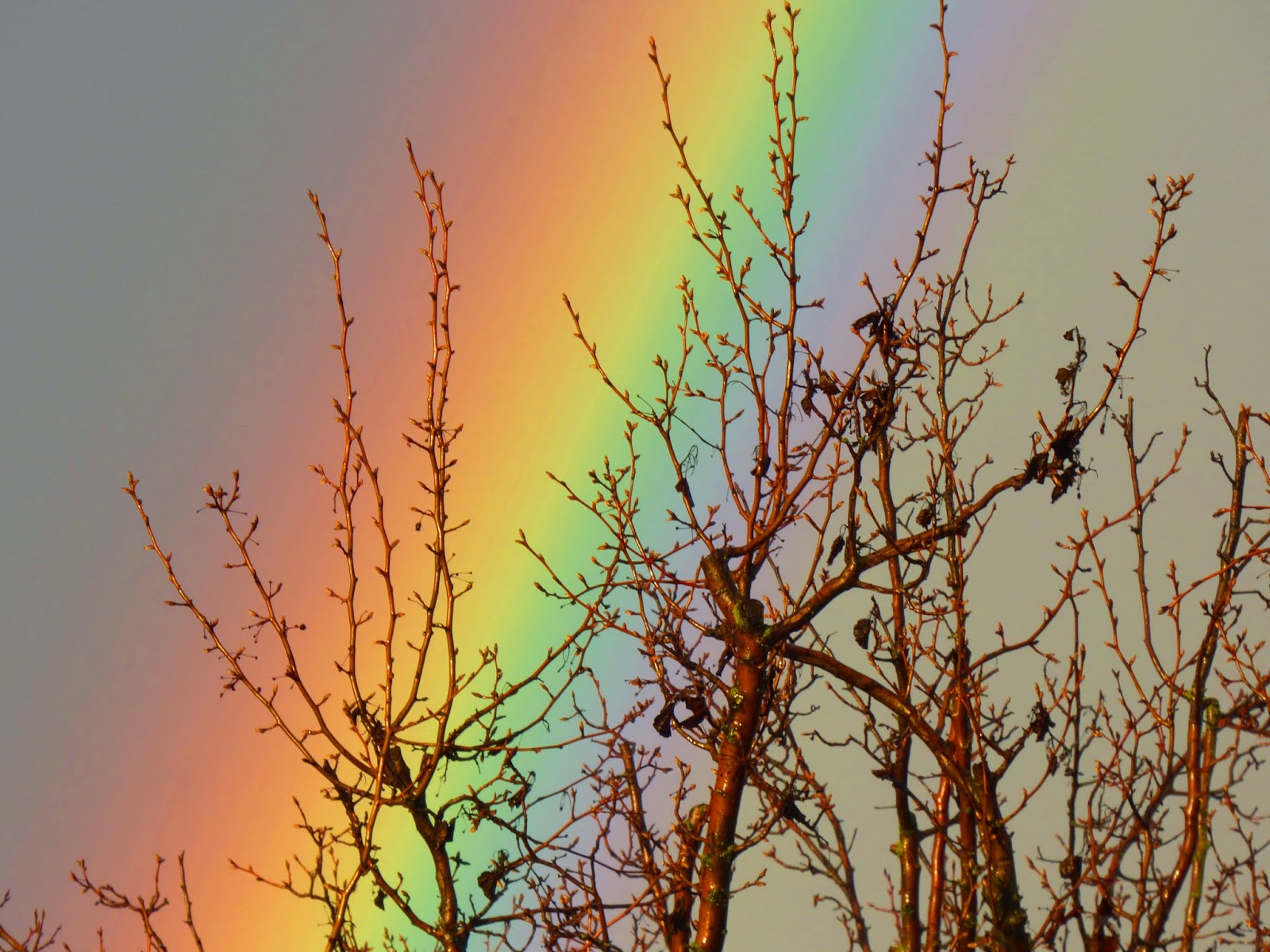 What actually arrived in my rain gauge was 0.14 inches on Friday, 0.43 inches on Saturday, and 0.98 so far today on Sunday. That means that the prediction was very precise, but not so very accurate. But since the precipitation amounts ended up on the high side, I couldn't be happier. Of course, no insult towards meteorologists is implied; they would actually give their predictions as a range of possible values rather than the precise numbers apparently demanded by Intellicast. 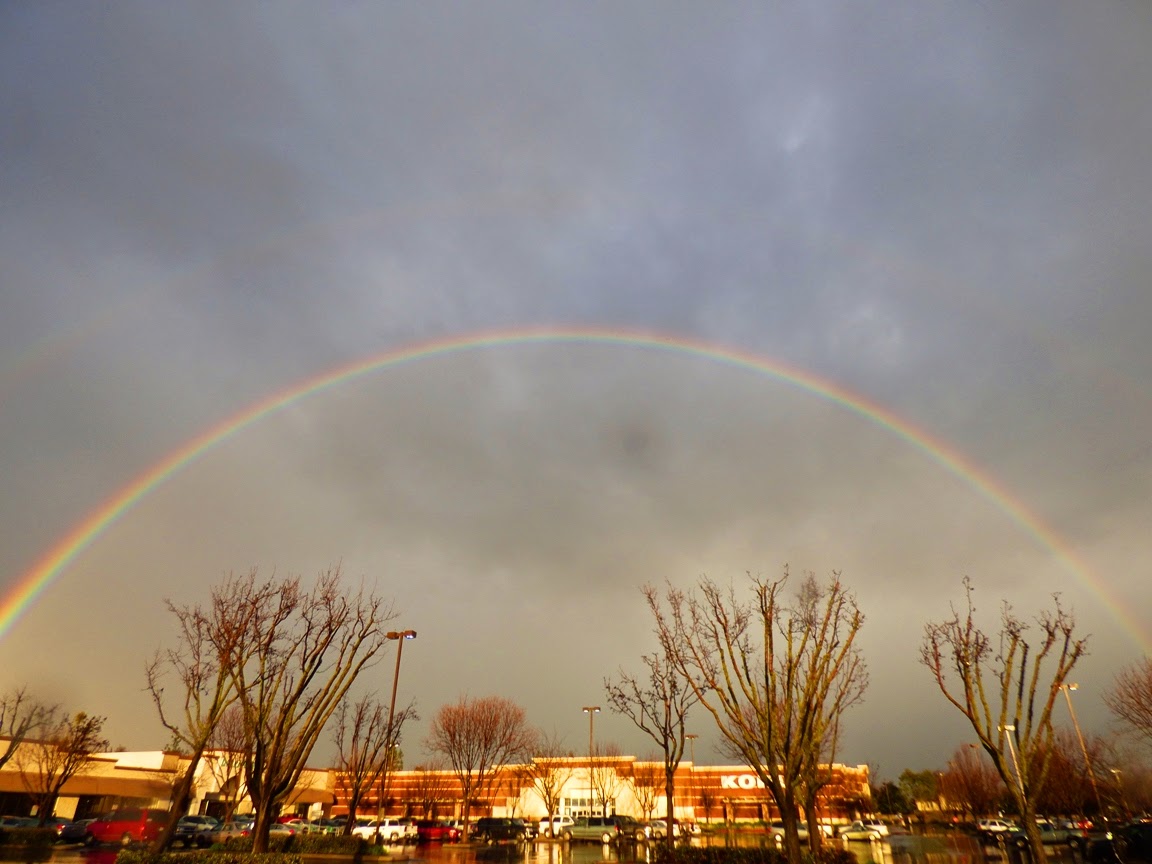 What does this mean in terms of California's crippling drought? Not as much as we could hope. The 1.55 inches of precipitation brings my local amount for the rain year to over 10 inches. 12 inches would mean an average year, a wonderful result on paper. But the problem is that getting normal precipitation here in the Great Valley doesn't mean all that much. That water helps by soaking into the soil and replenishing the groundwater to some extent, but the most important source of water in California is the Sierra Nevada snowpack. And the snowpack is in bad shape, at only about 25% of normal.

The problem is that these wet storms have been coming out of the tropics. The storms drop a fair amount of rain, but they are warm storms (temperatures this week have been in the 70s!). We need a couple of heavy-duty arctic storms, and those have so far failed to materialize. A persistent high pressure dome settled over California for all of January, diverting the arctic storms north over Canada and then down into New York and Boston. They've taken all our snow! I heard on the radio today a government official in charge of snowplows in an eastern city, and he said they were running out of places to put the plowed snow. A suggestion? Put the snow in trucks and trains and send out to the Sierra Nevada. We could use it. 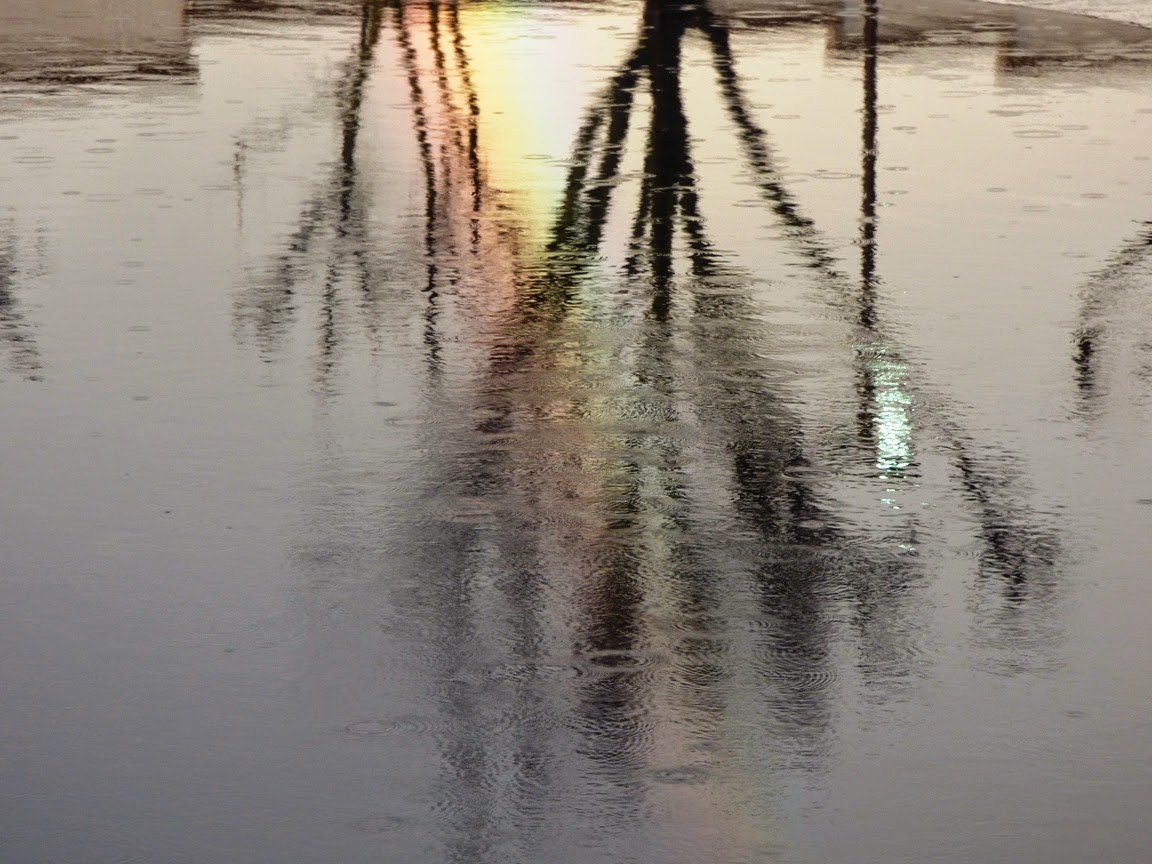 In the meantime we very much enjoyed one of the most vivid rainbows I've ever seen in our fair city.
Posted by Garry Hayes at 9:04 PM