Strangers in a Strange Land: Discerning the Story in the Rocks at Red Rocks 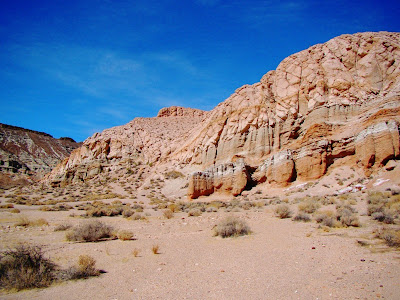 In the last post, we were introduced to the basic rules of stratigraphy as they stood exposed in the spectacular cliff faces of Red Rock Canyon State Park in California's Mojave Desert. A classroom chalk board can only provide a cartoon of these concepts, so there is nothing quite like being there and laying your hands on these records of the Earth's past. We were on the road with 30 community college students, most of whom were seeing this landscape for the first time. After an introduction to the stratigraphic principles of superposition, original horizontality, lateral continuity, and cross-cutting relationships, I sent the students forth to test their newly acquired knowledge against the cliffs above. We weren't quite to the point where we could do geologic mapping, but I provided them with an outlined photo of the scene (below) and asked them to describe the rocks, and identify any structures. 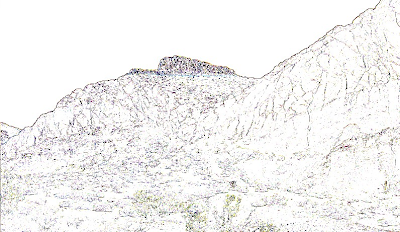 This is one of the finest moments a teacher gets to have. I wasn't teaching at all; my students were teaching themselves. They were crawling up and down the slopes, taking notes, and discussing what they were seeing. OK, it's true there was no cell phone service, so what else were they gonna do? 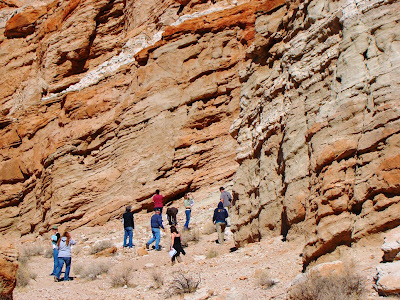 The layers were readily labeled on the basis of color alone, and most of the students developed some version of the picture below (click to enlarge): 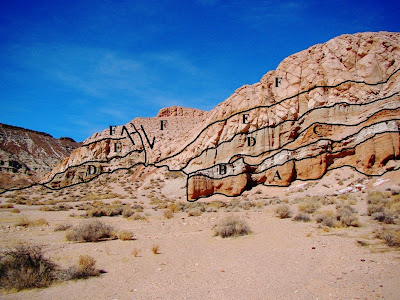 I climbed up the slopes to have a closer look at some the exposures. What happened here 8-12 million years ago? The red and brown layers (A, C, and D) proved to be arkosic sandstones, the kind of thing one might find in river channels and alluvial fans in a region of relatively high relief (lots of rapid erosion). Some of the finer-grained brown sediments formed in river floodplains. These rocks had clearly formed on land. 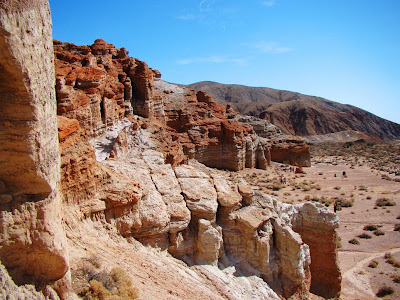 The white layers (B) with puffy deposits that kind of looked like ground hamburger were ash deposits, evidence of regional volcanic activity. The ancient environment here was beginning to look a little bit dangerous! 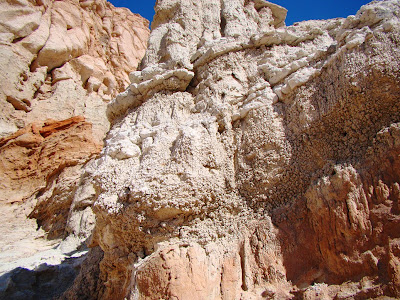 The upper cliffs and slopes (layer F), proved to be evidence of the greatest geological violence possible, a rhyolitic tuff breccia. The rock formed when hot ash rolled over the landscape, picking up gravel and debris and incorporating the material in the nearly molten tuff deposit. This was no place to be hanging about...but plenty of animals did. The layers of the Dove Springs Formation are a treasure trove of Miocene fossils, one of richest beds found in California (or pretty much anywhere, really). 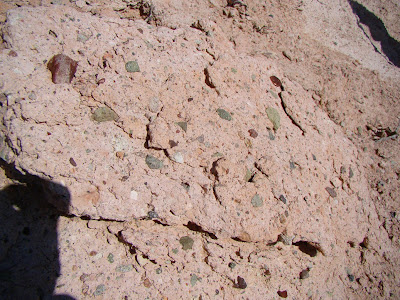 The animals found in the sedimentary sequences here include include extinct elephants, rhinos, three-toed horses, giraffe-like camels, saber-toothed cats, and bone-crushing dogs as well as smaller animals like ancestral skunks, martens, alligator lizards, rodents, and shrews. (follow the links to descriptions of each type of animal on the Los Angeles Natural History Museum website).

Faults in a cartoon drawing on a chalkboard are a lot easier to see than most faults in the real world. A number of the students noticed how the layers ended and identified the fault that caused them to be offset (see the arrows in the diagram above). I headed up to take a closer look at the fault surface...because I think everyone should know their faults... 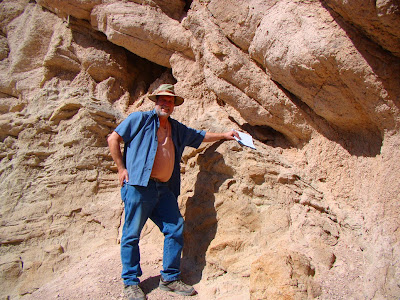 We only had a few precious days to see as much as possible on this trip, so we couldn't spend as much time at Red Rock Canyon as we would have liked. A fair number of geology programs do mapping exercises here, spending several days on site. It sounds like fun...if it isn't too hot. It was time for us to move on, so we loaded up the vans and drove north on Highway 14 towards our next destination at the south end of the Owens Valley. That will be part of the next post.

If postings seem sparse in the coming week, it would be because we are about to embark on part two of our Strangers in a Strange Land journey: an exploration of the Mojave Scenic Preserve in the desert south of Death Valley. We're attending the spring meeting of the Far Western Section of the National Association of Geoscience Teachers at the Desert Research Center at Zzyzx. Hope to see a few of you there!

More fun to learn crawling on the rocks than sitting in a class room. Have fun at your next geo-escapade.

I actually had a 7 day camping/mapping project out there, and yes, it was VERY hot. Thankfully on day 4, we went to a hotel for showers, swimming, and mid-trip report writing.

The class the following year tried it during Spring Break. They got a lot of snow, and made up a new game involving kicking a soccer ball lit on fire... Needless to say, there was quite a bit of unapproved alcohol present too lol