Strangers in a Strange Land: What stories can the stones tell? 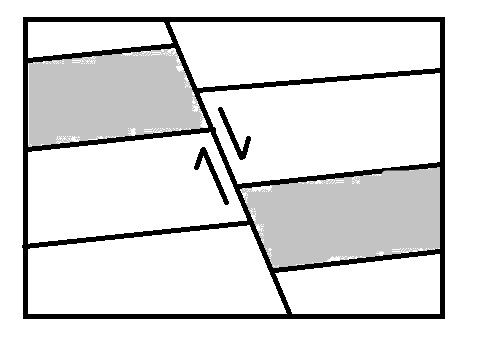 What does a cartoon tell us? I remember a time when at least certain cartoons had the purpose of communicating an important moral or story at a level that could be understood by anyone (and then there were the other 99% that represented empty brain calories...what have we done to our kids?). I spend a lot of time and effort (with varying success) drawing cartoons on a chalkboard to illustrate basic geologic principles. Part of what is missing is the context. I often draw the above picture to illustrate a fault (and some important principles), but the lines are often meaningless, because students are not yet associating lines on a board with rocks in the real world. So I try to give the picture some "realism" (below). I suppose this is a little bit like the difference between stick figures, and the more complex drawings by comic artists (Superman and Batman!). Or not... 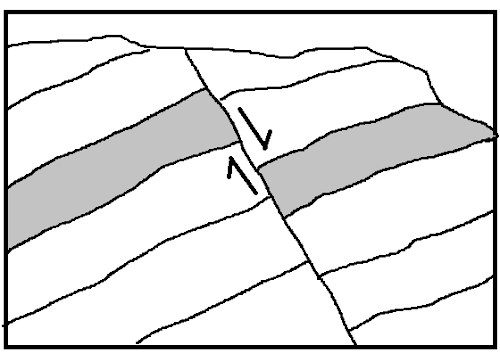 I ask the students to imagine they are walking through a canyon, and that they see rocks in the canyon walls that are aligned like those above. Since many of them have not done such a thing, or they were not looking at the rocks at the time, this can still be a meaningless exercise. As Mrs. Geotripper has led me down the road into art history, I have become aware that artists throughout history have had a similar problem.
Understandably, art throughout history has mostly been about gods, people, and to a lesser extent, animals (I'm thinking of cave paintings and petroglyphs, for instance). If rocks were ever included in a scene, they lacked structure, at least through the Renaissance. Note, for example the mountains in the scene above by Masaccio ("Tribute Money", c. 1426). Despite the vibrant colors and the life-like rendering of the humans, the mountains in the background are little more than gray blobs, lacking any kind of detail. The mountains in the image are mere cartoons.
Leonardo da Vinci is often given credit for introducing real geological details in some of his works such as the meandering river in the "Mona Lisa", and the clearly layered aspect of the stones on the water in the "Virgin of the Rocks" seen above. This had a lot to do with the fact that he had observed and studied rocks in the course of his life. He saw, comprehended, and thus recorded the structure of the rocks in his works.

So...what do Leonardo da Vinci paintings and cartoons have to do with our journey to Death Valley last week? It has to do with the intrinsic and tangible value of the field trip in geoscience education. You can show draw cartoons on a chalkboard, you can show digital images on a screen, but nothing can ever substitute for the value of students standing on a mountainside, laying their hands on the rocks and making their own observations and judgements about the story told by the rocks.

For my students, and for the first pioneers of geology, telling the story of the rocks was a huge step. The mere recognition that rocks have a story was one of the great advances in the science, because in the European worldview of the middle ages, rocks were simply created as is, and changes since their origin have been minor. They barely deserved attention unless they contained valuable ores. Nicolas Steno (1638-1686), a Danish physician who spent much of his life in Florence, changed that.

St. Nick (yes, he was beatified in 1988!) first annunciated three of the four founding principles of stratigraphy, and each of them can be connected to the cartoons I used above. Take a look again, only now with labels: 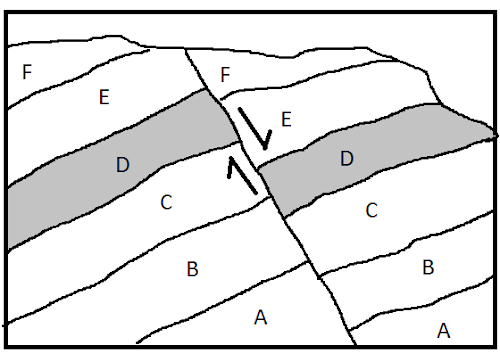 If we recognize that each layer formed uniquely from the others, then we can start to talk about the order in which things happened. Which layer formed first? If you said "A", then you understand the principle of superposition: if sedimentary layers have not been overturned, the oldest layers will be found beneath the others.

Did these sedimentary layers form originally as sloping layers? If you think layers form horizontally, in the bottom of lakes, on the bottom of the sea, or on a floodplain, then you understand the Principle of Original Horizontality: most sediments originate in horizontal layers. If the layers are tilted, some outside force put them that way.

Did layer E or F originally end in a cliff? If you think not, you are on the verge of understanding the Principle of Lateral Continuity: sediments are continuous unless they abut against the edge of the original sedimentary basin, or they thin out. We understand that one can expect to find more of layer E or F in the general vicinity, because although erosion has removed the intervening rock, the original layers continued across a larger area than just this outcrop.

When did the faulting occur? If you think it came after the sediments were deposited, than you would be right, and you begin to understand the Principle of Crosscutting Relationships: faults and intrusive rocks are younger than the rocks they cut across. Steno may have written something about this, but the principle is associated more often with James Hutton in the latest 1700's and Charles Lyell in the early 1800's.

With this basic background (oh my, this post reads like a classroom lecture, doesn't it?), you can begin to understand the enthusiasm with which I presented these topics on our Death Valley trip. I was standing in front of the cliff in the picture below: 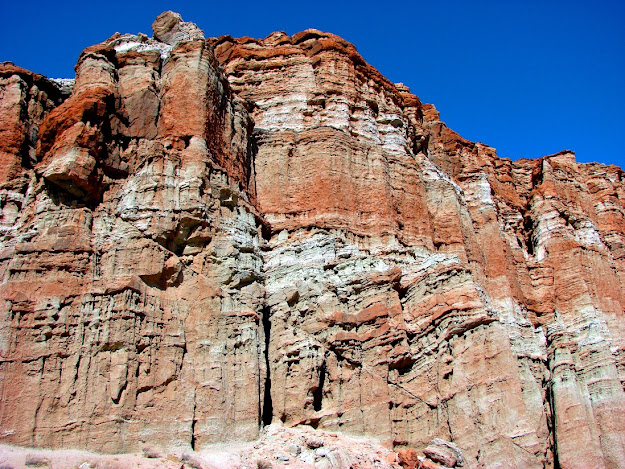 It's all there, including a sweet looking little fault cutting diagonally across the cliff face. We had reached Red Rock Canyon State Park on Highway 14 along the Garlock Fault and the El Paso Mountains in the Mojave Desert. The park is a showcase of geological principles, and it doesn't stop with the basic ones; those sedimentary layers are chock-full of fossils, and there are lava flows nearby too.

After presenting the basic principles we walked around the corner and encountered another outcrop, as seen below: 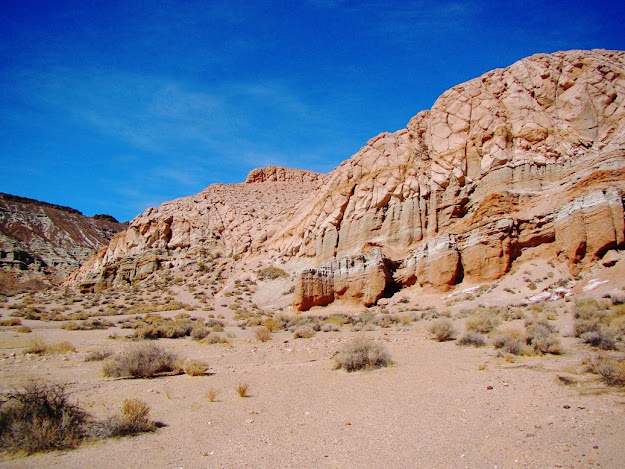 The students set out to identify the kinds of rocks, the order of the layers, and to define any structural complications. After only a few hours on the road, they were already deciphering the story of the Earth, as exposed in this corner of the Mojave Desert. What can you discern from this photograph? Can you do as well as they did?
Posted by Garry Hayes at 4:15 PM

So satisfying to read your (ummmm - lectures) posts, Garry. Thank you for your intelligent passionate posts, with fabulous photos too. Great stuff.

It never ceases to blow my mind every week how each rock has a story. Especially learning about the xenoliths in your other posts, very glad I decided to take GEOL-165.