The Other California: The Volcanic Mountains of the City of Angels 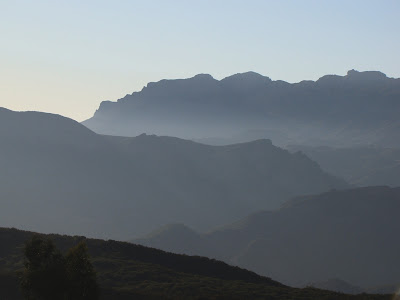 Well, sure there are. Of course we need to define what is meant by "volcanic mountains". If you are imagining a chain of active volcanoes spewing out lava flows down Wilshire Boulevard, well, no there aren't any of those, despite what you might have seen in a Tommy Lee Jones movie a few years back.

Extinct volcanoes, maybe? No, I'm not really aware of any of those in the L.A. region either. I've never noticed any suspiciously conical hills in the metropolitan area in my travels that way. If you want to see a city that will probably be the setting for a great disaster movie (but not a very pleasant event if it were to happen for real), you might try a place like Auckland on the North Island of New Zealand. That particular city is built on four dozen volcanoes, including some that erupted only 600 years ago (below).
But there are volcanic mountains adjacent to Los Angeles. They just aren't actual volcanoes, as the original vents have long since been eroded away. The city is practically surrounded by exposures of volcanic rocks. There are some on the Palos Verdes Peninsula, in the mountains above Orange County, and in the hills near Glendora and Pomona. Perhaps the best place to see volcanic rocks near LA though, is the Santa Monica Mountains and their offshore extension, the Channel Islands.

I am guilty of ignoring the Santa Monica Mountains. I grew up in Southern California and never knew of them being much more than those hills up behind Malibu, and a place where I once attended the Renaissance Faire. I spent my available weekends up in the high country of the San Gabriels, the San Bernardinos, or the Sierra Nevada. This last summer I found that I was missing out on an extremely interesting and diverse mountain range. It has a geology professor's dream of intriguing rock exposures: metamorphic, plutonic, sedimentary, and as the post title suggests, volcanic rocks. 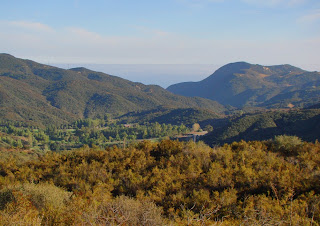 The volcanic sequence is not of a familiar origin. The so-called Conejo Volcanics were mostly extruded on the seafloor, only occasionally rising above the waves as islands. Volcanic activity is usually associated with divergent or convergent plate boundaries. The Conejo lavas were not exactly associated with either situation.

At divergent boundaries, the oceanic crust is pulled apart, releasing pressure on the underlying asthenosphere, a hot layer that is close to the melting point of the olivine-rich rocks of the mantle. The decompression allows a small portion of the asthenosphere to melt, producing basaltic lavas. At convergent boundaries oceanic crust is driven into the mantle underneath the adjacent oceanic or continental crust. As the rocks sink into the hotter asthenosphere, the added oceanic water acts as a catalyst or flux, lowering the melting point of the surrounding rocks. Bodies of magma called plutons rise through the crust forming volcanic arcs like the Andes, the Cascades or the Aleutian Islands.
A few other volcanic systems aren't related to plate boundaries. Thermal plumes, or hot spots, are responsible for sequential series of volcanoes on the sea floor (Hawaiian Islands) or on continents (Yellowstone caldera).

For most of the last 30 million years Southern California has been dominated by the lateral motions of the San Andreas fault system, a transform plate boundary. The fault system has not been a simple line, and the position of what we call the San Andreas fault has shifted about a number of times. One of the biggest changes was a shift eastward as the Gulf of California opened up around 4 or 5 million years ago. Transform boundaries are not normally associated with volcanic activity, but there are definite exceptions, and that seems to be the case in the area that is now exposed as the Santa Monica Mountains and Channel Islands.

The Santa Monica Mountains are part of the California province called the Transverse Ranges. They are one of only two mountain ranges in North America that are oriented east-west instead of the usual northerly trend (the High Uintas of Utah are the other). The discovery and acceptance of plate tectonics provided an elegant explanation for the origin of most of the world's mountain ranges like the Alps, the Himalaya and the Andes. The acceptance of the theory seemed to deepen the mystery of the origin of the Transverse Ranges. How could a northwest trending transform boundary produce an east-west trending set of mountains? Or did these mountains have anything to do with the transform faulting at all? Some researchers suggested the structure of the Transverse Ranges predated the onset of transform faulting. The Transverse Ranges are a treasure trove of ongoing and potential future research in structural geology and landscape evolution.

Tanya Atwater and the Educational Multimedia Visualization Center at U.C. Santa Barbara have provided us a marvelous animation that offers an excellent explanation for the onset of volcanism in the ranges around 13-16 million years ago (there are many excellent animations available for free download on the site).

As you watch the video unfold, you will see that the crustal blocks that constitute the Transverse Ranges have been literally rotated 90 degrees or more, having been caught between strands of the fault system. As the blocks rotated, extensional forces caused openings in the crust, forming deep sedimentary basins that collected thousands of feet of sediment, and also allowing magma to rise from the mantle forming volcanoes on the seafloor,  These are the rocks that make up much of the Santa Monica Mountains.

This animation is courtesy of the Education Multimedia Visualization Center.
Download this and many others at this site.﻿
These volcanic rocks formed more than ten million years ago. Tectonic conditions have shifted and much of the region is now under the influence of compressional forces that are much less likely to result in volcanic activity. But it makes for a chaotic mess of earthquake activity as events like the 1994 Northridge earthquake can attest.

The Santa Monica Mountains are a confusing patchwork of federal, state, county, and city parklands and include large areas of private property. Land use ranges from densely urbanized areas (the mountains include parts of Hollywood and Beverly Hills ) to untrammeled wilderness. A good place to start planning your exploration is the website for the Santa Monica Mountains National Recreation Area. A look at the park map reveals the logistical headache of trying to administer the parklands.

The Other California is my ongoing exploration of the less-known geological corners of our beautiful state. Tens of millions of people visit the California Coast every year, and on one Labor Day weekend something like 800,000 people may hit the beaches at Malibu. In a year less than 500,000 will visit parks like Malibu Canyon or all of the federal units combined. The interior parks are great places to escape the crowds.

In the next post, we'll take a look at an unexpected canyon in the Santa Monica Mountains, and what does Korea have to do with anything?
Posted by Garry Hayes at 12:14 AM

Do the Santa Monicas have any relationship to the Neogene northern-migrating slab window that produced volcanics in both the Sierras and the Diablos (such as Little Walker Caldera and Pinnacles)?

I'm not sure I can say, but I have a feeling that they may be related to the formation of the Pinnacles, but less so of the Sierra. I think those are more related to Cascades style volcanism. But I don't claim any special expertise!

I know it's not CA, but what about the E/W mt range in Oregon's Siskyou NF that I think came off the Sierras?

Another wonderfully educational and interesting explanation, Garry. Thank you once again.

Really enjoy reading your explanations of everything geo-California, Garry.

I've just got to visit the Channel Islands soon!

Where is a good place to see the volcanic rock near the glendora / Pomona area ?

The north, east and south sides of Puddingstone Lake at Bonnelli Park is the easiest place to access volcanic rocks in the Glendora area. East of Linder Equestrian Park in the Glendora Hills is another exposure. Look for the Tv rocks on the interactive map of California at http://www.quake.ca.gov/gmaps/GMC/stategeologicmap.html

To Vee and Gary re: Pomona.
South of Pudding stone reservoir (aka Frank G. Bonelli regional park) is Elephant Hill. A volcano located just east of the I-57 by the railroad tracks. W.Mission road cuts right through the center of it, you can see the cone shape from inside of the volcano as Mission turns into Diamond Bar. Gypsum can be found in the road cut. This is the epicenter that cause the pudding stone to rise and create the hills and formation to the north of the I-10. Info came from Geology class 1977.