Before you read anything else in this particular blog, go to the BBC news and look at 3 minutes and 46 seconds of stunning pictures of the extraordinary flooding this season in Queensland, Australia. The amount of water on the ground in the normally dry landscape is almost beyond belief. The BBC mentions a vast inland sea the size of France and Germany combined. My heart goes out to those in the midst of the disaster. This was an unusual train of meteorological events that ended a long drought, and culminated in the arrival of Cyclone Yasi, a category 5 hurricane. It will take weeks for the waters to subside, and years for the region to fully recover. 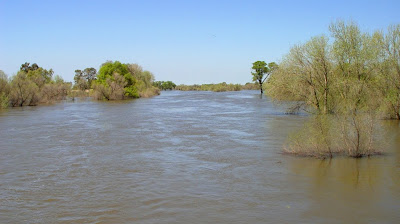 Not Australia, this is flood stage on our own San Joaquin in 2006


Seeing events like this unfold on television or on the computer screen can provide a certain emotional distance from the full magnitude of what has happened. Thoughts develop along the lines of "Could it happen here?" and as we realize it might, we think "Are we prepared for an event like that?" Floods occur essentially everywhere, but as I am based in California, my ears perk up whenever I hear about unfolding events along the Pacific coast. We had a pretty wild time of it in the last two months with serious floods in a number of areas, especially in southern California. It makes one wonder how bad it could possibly get. Pretty bad, as it turns out.

Those pesky climate experts have been analyzing the possibilities that California could be hit by a devastating storm sequence that could leave much of the Central Valley as an inland lake. It sounds unlikely, at best a hypothetical model, but it has actually already happened. In 1861-62, a storm series dropped so much precipitation that a 300 mile long lake covered the valley, and forced the state capital to move operations from Sacramento to San Francisco for a time. I mentioned Yellowstone in a recent post, and it got me thinking once again about those things that are worth worrying about, those that are not, and those that are worth preparing for. Yellowstone last had an eruption 70,000 years ago, and the last major "supervolcano" (i.e. rhyolite caldera event) was more than 600,000 years ago. So how much should we worry about Yellowstone? It could happen, but not likely any time soon. But people are freaked out about the possibility if a quick internet search is any measure. They obsess about it, and even see strange conspiracies.

But what about a "superstorm"? People don't seem to worry about flooding so much, yet huge floods are a disturbingly common occurrence. Besides 1862, evidence has been uncovered of similar intense events in 212, 440, 603, 1029, 1418, and 1605 (sediments from storm runoff are preserved in ocean basins offshore of the state). That adds up to around a 0.3% possibility in a given year; not common, but enough that emergency providers are beginning to seriously consider the possible effects. There was a bit of a stir in the geoblogosphere a few weeks ago about a report from the US Geological Survey about the potential for an atmospheric river storm they have termed an ARkStorm (Atmospheric River Storm). The possible effects make California's expected "Big One" earthquake look, well, medium in comparison. From the USGS ARkStorm Report (PDF download here - 46 mb):

The storm is estimated to produce precipitation that in many places exceeds levels only experienced on average once every 500 to 1,000 years. Extensive flooding results. In many cases flooding overwhelms the state’s flood-protection system, which is typically designed to resist 100- to 200-year runoffs. The Central Valley experiences hypothetical flooding 300 miles long and 20 or more miles wide. Serious flooding also occurs in Orange County, Los Angeles County, San Diego, the San Francisco Bay area, and other coastal communities. Windspeeds in some places reach 125 miles per hour, hurricane-force winds. Across wider areas of the state, winds reach 60 miles per hour. Hundreds of landslides damage roads, highways, and homes. Property damage exceeds $300 billion, most from flooding. Demand surge (an increase in labor rates and other repair costs after major natural disasters) could increase property losses by 20 percent. Agricultural losses and other costs to repair lifelines, dewater (drain) flooded islands, and repair damage from landslides, brings the total direct property loss to nearly $400 billion, of which $20 to $30 billion would be recoverable through public and commercial insurance. Power, water, sewer, and other lifelines experience damage that takes weeks or months to restore. Flooding evacuation could involve 1.5 million residents in the inland region and delta counties. Business interruption costs reach $325 billion in addition to the $400 billion property repair costs, meaning that an ARkStorm could cost on the order of $725 billion, which is nearly 3 times the loss deemed to be realistic by the ShakeOut authors for a severe southern California earthquake, an event with roughly the same annual occurrence probability. 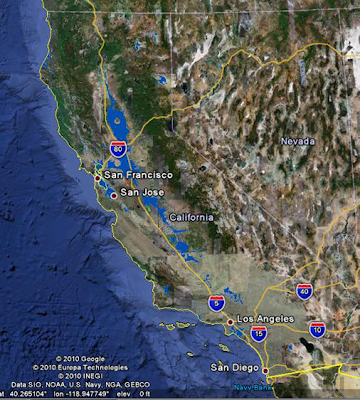 Flooding rarely gets the epic movie treatment. Volcanic eruptions and earthquakes are so sudden and devastating; rising water just doesn't cut it as a drama setting. I haven't seen a lot of Katrina movies yet. But life isn't a movie. If you live in California, think for a moment about getting hit with a superstorm, and the delta and Central Valley ending up like this: 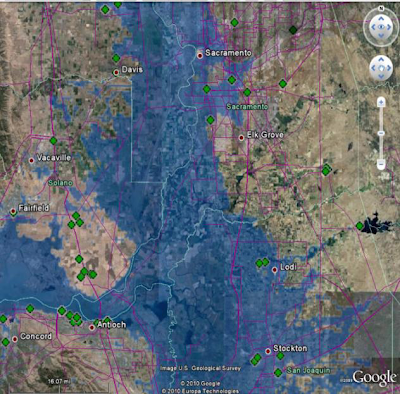 It is a real possibility and a sobering thought....

By the way, not wanting to stir the pot (or maybe I do), if you are worried about Yellowstone erupting and you live in California, why aren't you giving more thought to our very own active rhyolite caldera, our "supervolcano"?

Maps and second photo from the USGS ARkStorm Report (PDF - 46 mb)
Posted by Garry Hayes at 1:34 AM