Death Valley Days: The First Day - Racing the Wind (and the torrential downpours) 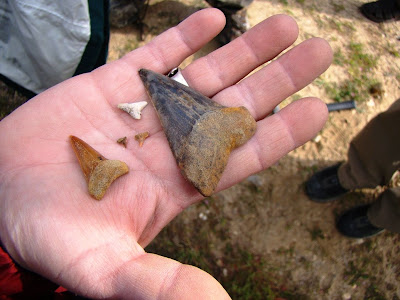 We actually left last night, but drove the length of the Central Valley in the dark to make today more interesting (trust me, it's better that way). We drove through an intense rainstorm, raced on ahead of it, and set up camp near Bakersfield, hunkering down to await the onslaught. It didn't come! It's not that there is no storm, it's huge. But it was tracking north, and not moving east, so we were dry all night, and had sun for most of the day.

First stop was in Neogene marine sediments at the south end of the Great Valley, which included an introduction to field geology and the idea of formations and environments of deposition (our students are mostly seeing geology in the field for the first time). How do you know a layer is marine? One clue is in the hand of the student above: fossils! Somehow, unsurprisingly, a place called Sharktooth Hill yielded up shark teeth (and a few fragments of seagoing mammals). 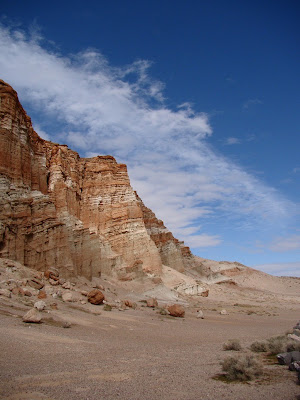 The second stop was one of California's wonderful state parks (threatened in the current budget mess): Red Rock Canyon State Park. The Neogene sediments here, 60 miles farther inland, are terrestrial in nature, suggesting that the shoreline of the Pacific Ocean was a lot farther east a few million years ago. The students worked at the idea dividing an outcrop into formations or members. The sun was shining, but we were beginning to realize that we were being stalked and pursued by ominous looking clouds on the horizon. So, like refugees in a disaster movie, we set off in the direction that seemed the least stormy: north.
In about 45 minutes we reached Fossil Falls. It isn't a place to find fossils, it's a place to search for Ice Age rivers that haven't existed for 12,000 years or more. The overflow from Pleistocene Owens Lake poured over the lip of a basalt cliff and formed a bizarre landscape of giant potholes and polished basalt. There was an ancient form of life present, but it was still living: fairy shrimp, surviving in a few drying pools at the bottom of some of the potholes. 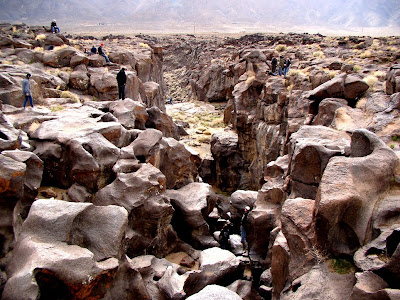 There was also the evidence of the previous inhabitants of the region (below); they left behind shards of obsidian and some artwork, bragging of their exploits in hunting (or maybe hopeful thinking?) The storm was intensifying to the north of us and from behind, and from the west. We turned east (which we were going to do anyway), and skirted the south end of Owens Lake. In the Ice Ages, it was hundreds of feet deep, and in modern times a lake 30 feet deep persisted with no outlet, but Los Angeles sealed the fate of the lake in the 1920s when they diverted the streams feeding into the Owens River and sent the water south. 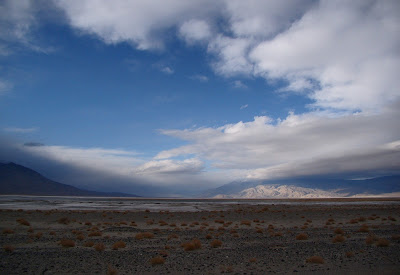 The weather turned ever more ominous as we passed over the Inyo Mountains near old mining town of Darwin, but a thin beam of sunlight broke through the clouds and lit up a ridge of Paleozoic limestone along the crest of the mountains. 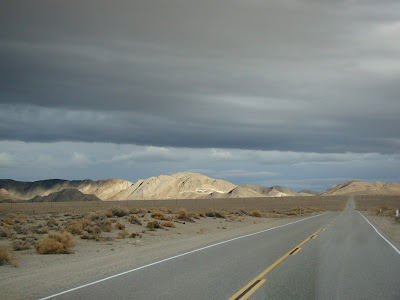 We careened down the Inyos into the Panamint Valley, driving right through the heart of a breached cinder cone in the process. 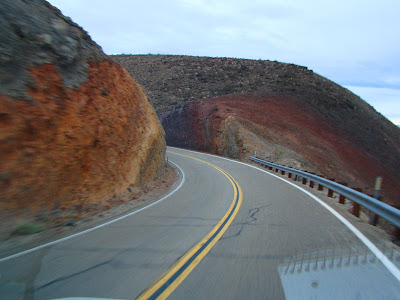 After being buzzed by an F-16 at only a few hundred feet, we crossed the bottom of Panamint Valley, and were treated with a marvelous view of Telescope Peak, which at 11,049 feet is the highest elevation in Death Valley National Park. We crossed Towne Pass in the Panamint Mountains (5,000 feet), and descended a vertical mile to our camp at Stovepipe Wells, elevation...0 feet. After spending an entire day worrying about the gigantic storm enveloping California, we had not had a single drop of rain. Looking at the weather radar, I don't think we will be so lucky tonight; a 100%chance of rain is in the forecast. We battened down the hatches, and snuggled in for a good night's sleep. Tomorrow the adventure continues! 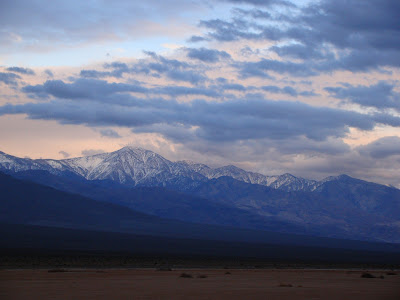 I'm doing my best to recreate your route in Google Earth and it's fascinating to try to match your photos to the lay of the land in GE.

There are two things I'm dying to ask about. First, where can I find more information about Sharktooth Hill? (I seem to recall a blog post by you or perhaps one of the other CA geobloggers regarding its ownership status... I'll have to track that down.) Second, the last time I drove from Owens Lake over to Death Valley I did it after sunset and missed that beautiful breached cinder cone. Is there a good geologic field guide you'd recommend for that Darwin-Panamint Valley region? Next time I'll need to do it properly with full daylight.

Best of luck with the weather... I hope you don't wake up in the Anthropocene version of Lake Manly.

Sounds like a great trip so far. I'll have to remember Fossil Falls as I like those potholes. Telescope Peak looks nice with it's dusting of white. Hope you stay dry in DV. Yet it could be interesting to experience the rain there.

Ron, I keep up with Sharktooth Hill news at sharktoothhill.org, but it doesn't answer my question for Garry, which is where did you camp there, and can I camp there too?

Ron, I don't have the guides in front of me, but will try to post some that I've used. The actual Sharktooth Hill is private property, but there are some exposures across the Kern River on 'Ant Hill'. We camp at Kern River County Park at Lake Ming about 10 miles east of Bakersfield. Let me know next time you're out here and I'll send directions. It's a nice grassy shaded camp right on the Kern River.