Death Valley Days: The Second Day - We Dodge a Bullet 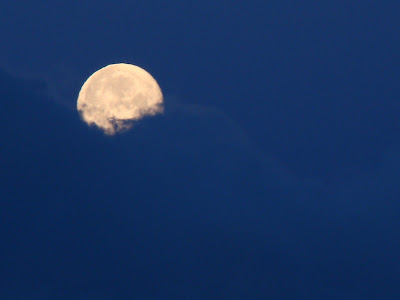 The biggest, baddest storms still find heartbreak in the barren jagged peaks of the Basin and Range Province, and especially Death Valley. Last night we awaited the onslaught of winds and a 100% chance of rain, but the mountain barriers of the Panamint and Cottonwood Mountains absorbed most of the storm's moisture, and we had just a spritz of rain in our camp at Stovepipe. Furnace Creek got a bit more, 0.14 inches, but all in all we dodged a very big bullet, aside from some inconveniently heavy winds that destroyed one of the student's tents overnight. Morning arrived with a wonderful moonset over the Cottonwoods. 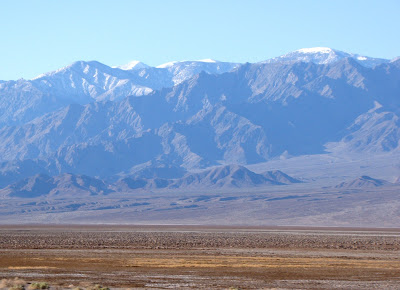 As we hit the road, we realized the storm really was past, as sunshine lit up the Panamint Mountains on the east side of Death Valley. If you are noticing the snow, it's not an unusual occurrence in the park, considering the Panamints top out at over 11,000 feet in elevation. The valley floor in the foreground of the picture is below sea level. Death Valley has some of the highest relief of any place in the United States (the difference between the highest and lowest points). The rugged slopes are composed of Paleozoic and Proterozoic sedimentary rocks, mostly carbonates, with a healthy mix of intrusive granites and older metamorphic rocks 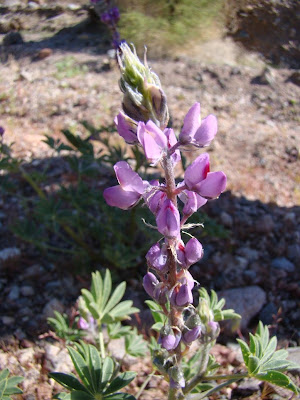 It would be inaccurate to say that the flower blooms have started in earnest, but we found a few here and there, and they added a nice splash of color to the desert. 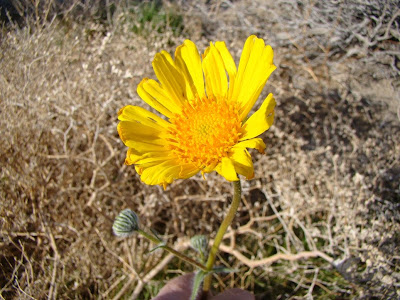 We made stops at some fault exposures east of the park near Shoshone (the 'Charlie Brown outcrop'), and headed over the Black Mountains into the southern reaches of the Death Valley graben. We checked out the Amargosa Chaos exposures at Exclamation Point, the Pahrump Group near Ashford Mills, the fault scarps, offset cinder cone and wave cut terraces near Shoreline Butte, and I took...no pictures! I was busy...eh...teaching and stuff. 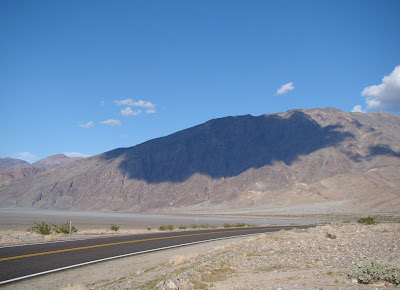 We made a stop at Mormon Point and took in a couple of Death Valley's enigmatic features, the turtleback faults. These are massive dome-shaped fault surfaces whose origins are debated, but they are composed of deep crustal rocks that have been metamorphosed into gneiss and schist. The rugged exposures reveal collisions of land masses around 1.7 billion years ago, and are the oldest rocks in the park. 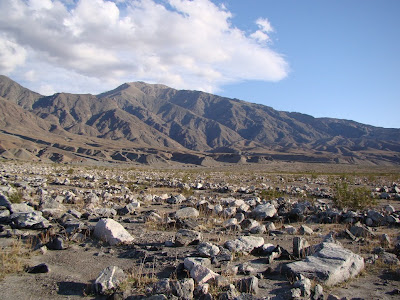 Mudflows and flashfloods have scattered large boulders of the ancient rock across the valley floor and are a treat to explore. One huge boulder (below) contained huge crystals of black hornblende 3-4 inches long. 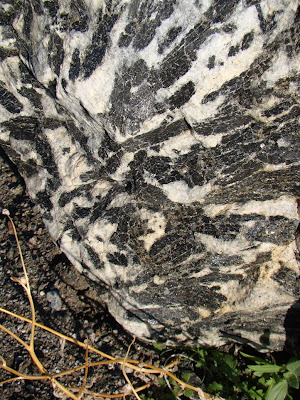 We of course had to do the touristy thing and visited the lowest point in the western hemisphere at Badwater. The actual lowest point is out on the salt flats a mile or two away, but what's a foot or two between friends? People were walking out onto the freshest salt exposures. 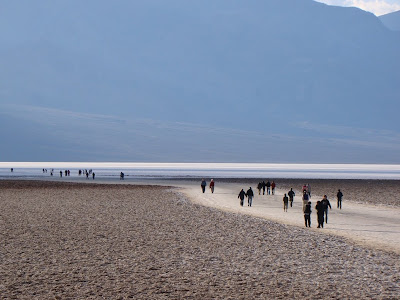 The afternoon sun was sinking fast, but we had one more thing we wanted to do... 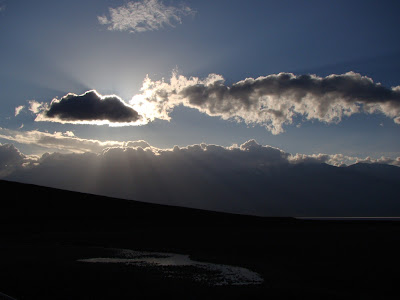 It's also a touristy thing too, but we wanted to see the flaming colors of the sunset on the Artists Palette. We drove up Artist Drive as fast as we were able, and we didn't quite get to the Palette, but we did stop and get a nice panorama of the other volcanic rocks at the north end of the Black Mountains. 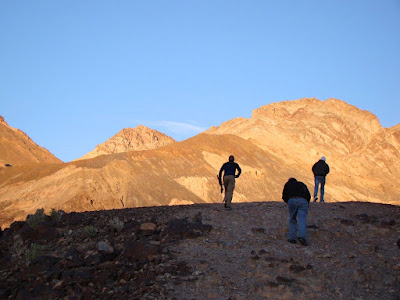 Conditions are a lot calmer tonight, so hopefully no rain or heavy winds. Two nights of that and I'll have a tired class, and we have lots of great stuff to do tomorrow!
Posted by Garry Hayes at 9:51 PM

You've gotten a nice start on the park. Bummer about the winds. Hope you missed the storm that's dropping snow here.