The Hawai'i That Was: What the Worst Disaster You Can Think of? The Terror of Na Pali... 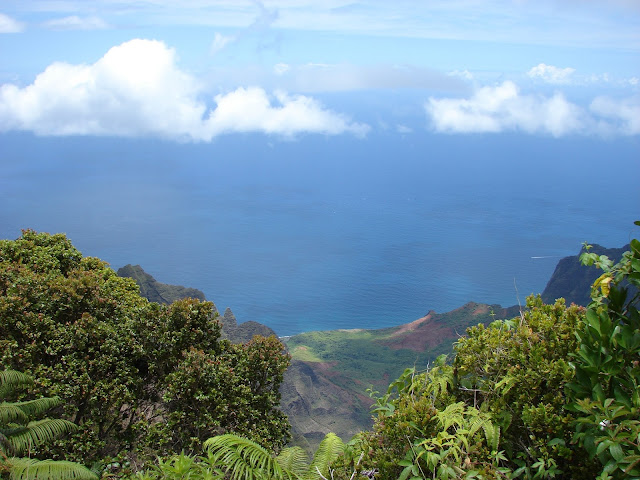 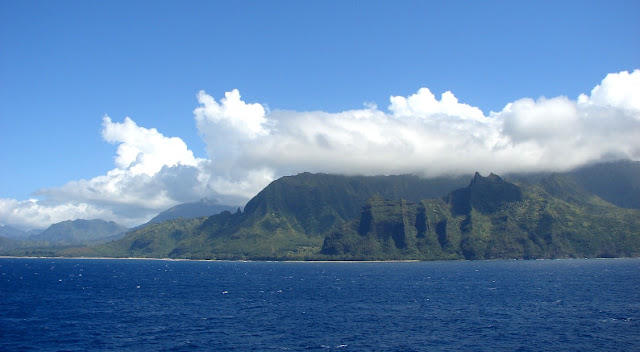 Well...there's history, and geology. What's the worst disaster you can imagine happening in the place where you live? Are big earthquakes possible? Volcanic eruptions? What about hurricanes or tornadoes? On our adventure today, we visit the site of one of the greatest natural disasters possible.

Kaua'i is a modest island by Hawai'i standards, covering only 553 square miles, fourth in size after Oahu, Maui, and the Big Island. Unlike the other islands, it was principally a single basaltic shield instead of four or five like the Big Island and Maui (it's a little more complicated than that, but I will deal with that story later in another post). It's also the oldest of the major islands, at about 5-6 million years. The coastal areas of the island are of mostly gentle topography, but on the northwestern side of the island, that gentleness ends. Dramatic cliffs 3,000 feet high drop precipitously into the Pacific Ocean. Welcome to the Na Pali. Why are these incredible cliffs here? And what does that have to do with disaster? 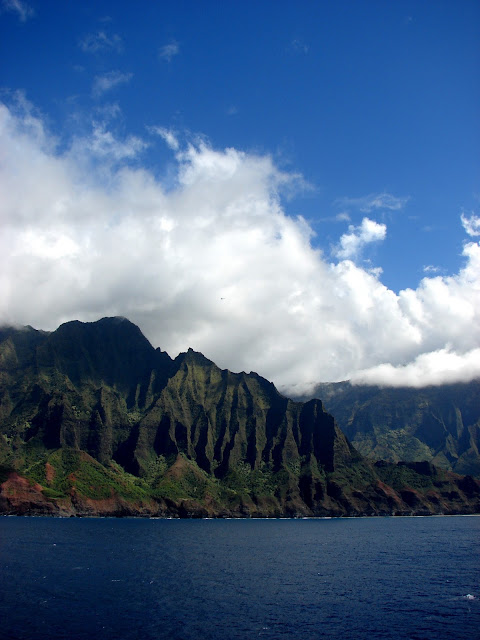 Try to imagine a much younger Kaua'i maybe 4-5 million years ago. The shield volcano rises to an elevation of perhaps 8,000 feet above sea level, and the slopes of the mountain are covered with dense rainforest. Myriad species of birds fly among the trees, along with thousands of species of insects and gastropods. All of them are unknown to humankind, because the kind of humans that would pay attention to such things would not be present in the world for a long time. All that was here was about to be lost.

The islands may feel permanent and unchanging in some ways. The lava flows that emerged from the shield were solid and hard and one might feel that they would not be easily eroded or altered by time. That's a delusion, of course. The volcanic rocks were originally deposited on the sediments of the seafloor, and many of the original lava flows were composed of relatively unconsolidated rock, small cinders and ash layers that are not nearly so solid as the lava flows above. The sheer weight of the overlying lava flows exerted such tremendous stress on the unconsolidated rocks that they destabilized and commenced slowly giving way in a lateral sense. The flanks of the island were weakening. 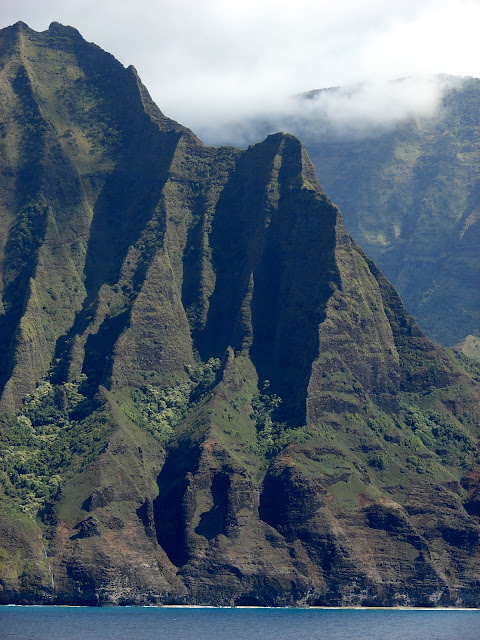 It's not at all entirely clear how the end came about. There may have been earth movements for centuries, maybe even violent earthquakes that produced scarps high on the flanks of the volcano. Such cliffs can be seen today on the southeastern margin of the Big Island near the Kilauea caldera. The quakes may even have produced small tsunamis that swept across the lower shores of the island. But these events would not have affected the animal of the rainforest all that much.

Maybe there weren't any warning signs. I find that to be less convincing, but maybe the end came suddenly, with no precursors. It didn't matter then, but we'd sure like to know today what transpired, because it would be nice to have some warning when an unimaginable tragedy is about to strike. 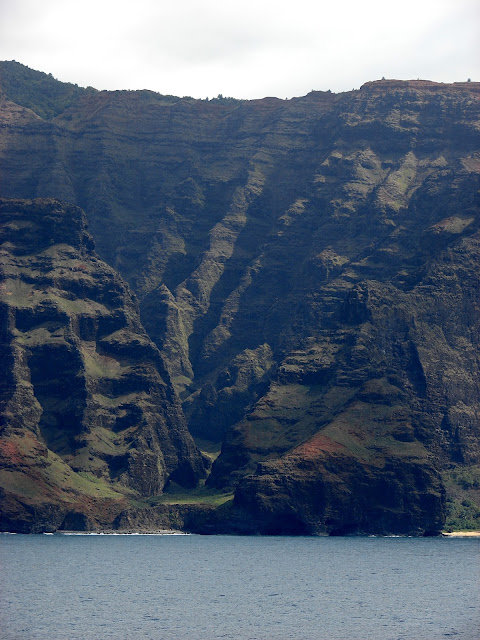 In any case, the final stroke must have come quickly. Who knows what kinds of sounds were heard as a significant percentage (a fifth? a quarter?) of the entire island suddenly broke away and sank into the sea? The collapse was so rapid that the debris flowed for sixty miles (100 km) along the sea floor. The rapidly sinking land broke up into large chunks and disappeared beneath the turbulent waves. Some of the fragments were miles across. The homes and habitats for hundreds of species disappeared in an instant, never to be seen again.

The loss of a significant part of the island beneath the waves was only part of the story. Displacements of ocean water on this scale produce tsunamis of unimaginable size. We aren't talking about the 30'-40' high waves of events like the tragedies of Indonesia in 2004 or Japan in 2011. We are trying to imagine a wave that exceeds a height of 1,000 feet. Or considerably more. There are chunks of coral on the island of Lanai that presently sit 1,300 feet above sea level. And Lanai is and always has been slowly sinking. Those blocks of coral were tossed there by mega-tsunamis that were produced by similar catastrophes on other nearby islands.

So first, a huge portion of the island sinks into the ocean, and then the water rises in response and sweeps across vast swaths of Kaua'i and the other Hawaiian islands. The level of destruction is incomprehensible. How many species went extinct that day? No one can ever say. Where a coastal plain once existed, there were only cliffs. Immense cliffs. In time, vegetation returned, and erosional processes sculpted the escarpment into the beautiful fluted cliffs we see today along the Na Pali coastline.

One immediately has to wonder whether it could happen again. The answer is, of course, sure. But these events thankfully don't happen often, maybe once every 300,000-400,000 years. And for now, knowing they have happened in the past, we'll perhaps recognize some of the warning signs that such a slide is again imminent. For the time being, we can instead appreciate the beauty that emerges from catastrophe. 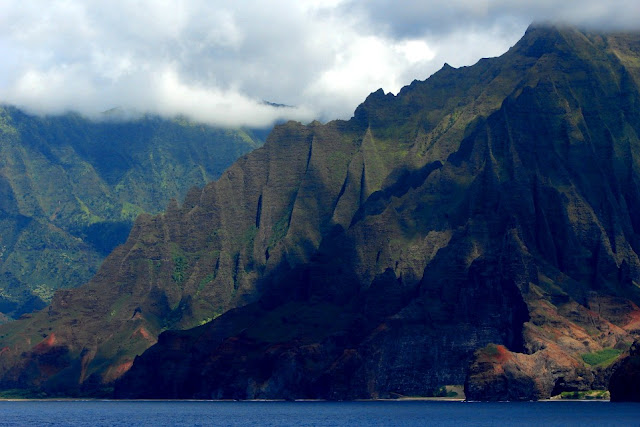 The cliffs of the Na Pali are a bit difficult to see. You can drive to Kalalau or Pu'u o Kila lookouts above Koke'e Park and look down from the cliff tops to the sea (see the top picture in this post). These are two of the most astounding views I've ever seen in my life. You can walk the 11-mile long Kalalau Trail that winds along the base of the cliffs (an adventure I've longed to try). Or you float in the sea offshore for an astounding view. Some people take kayaks (another dream), and others take cruises. I had that opportunity in 2006, and that's when I took most of these pictures. 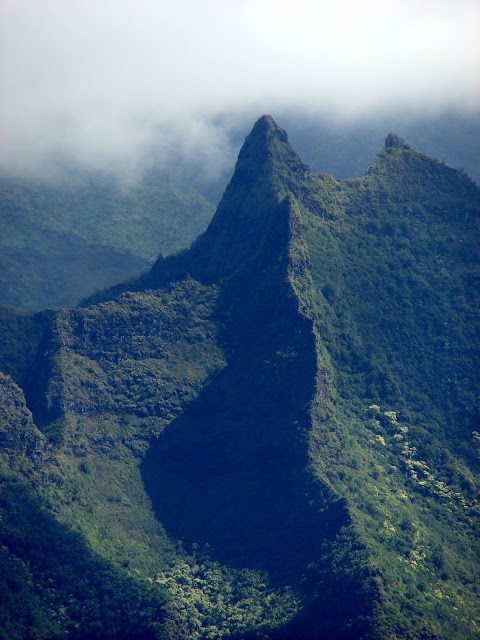 This post is part of a long-running blog series on the geology and history of the Hawaiian Islands, based in part on our summer field studies journey of last June.
Posted by Garry Hayes at 11:37 AM