The Hawai'i That Was: Into the Last Stand of Wilderness in Kaua'i, the Alaka'i Swamp 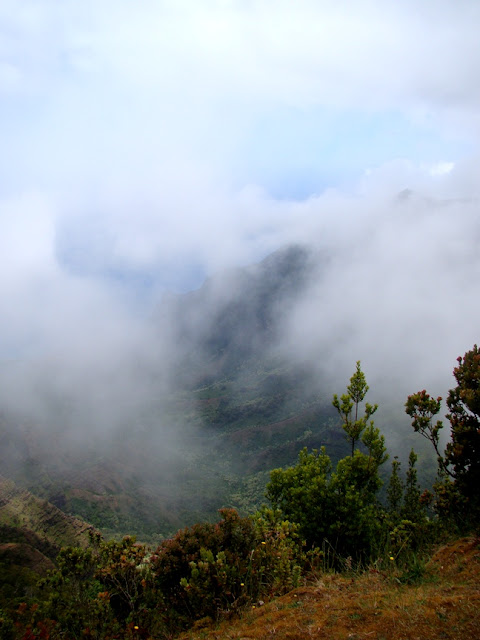 Yes, the last stand. To explain, Kaua'i is a relatively small island, the deeply eroded remnant of a giant volcanic shield. Most people of Kaua'i live along the narrow coastal plains that nearly encircle the island, but there is an uninhabited plateau covering the central part. It is bound to the north by the cliffs of Na Pali (a future post), and to the west it has been deeply dissected by the erosion of Waimea Canyon (also a future post). It reaches elevations of just over 5,000 feet. 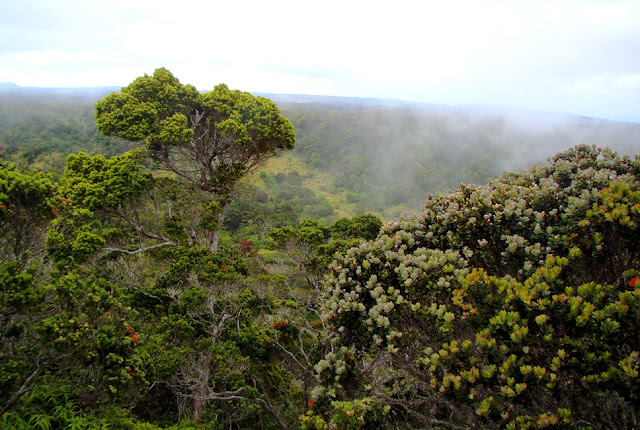 The second highest point on the summit plateau, Mt. Wai'ale'ale is in the running as the wettest place on planet Earth, with an average rainfall of 456"/year between 1907 and 1945. So much rain falls on the upland plateau that most of the bedrock has weathered into a thick clay deposit, the raw material forming the mud of the Alaka'i Swamp. There was once an effort to build a road through the swamp, but the equipment sank in the muck. Access is provided by a number of trails instead.
It might not be entirely clear why a person might want walk in such a forbidding place, especially when there are sparkling beaches close by, and nice paved overlooks as well. But there is a reason; it is the last stand of wilderness life on Kaua'i, and indeed the entire Hawaiian Islands. There are an inordinate number of rare and endangered species of plants and animals that share a declining area of high precipitation and tropical conditions. The native birds are especially vulnerable. They're thriving in this extreme habitat for two unique reasons. Mongooses were never introduced to the island (meaning no pressure from nest predation), and disease-carrying mosquitoes cannot thrive at the cooler high elevations, so the birds aren't threatened by avian malaria..
It might seem that a hiking trail through loose mud would also be a near impossibility, but many of the trails are actually wire boardwalks that keep the hiker out of the muck. The trail through the swamp is one of most fascinating places I've ever walked. 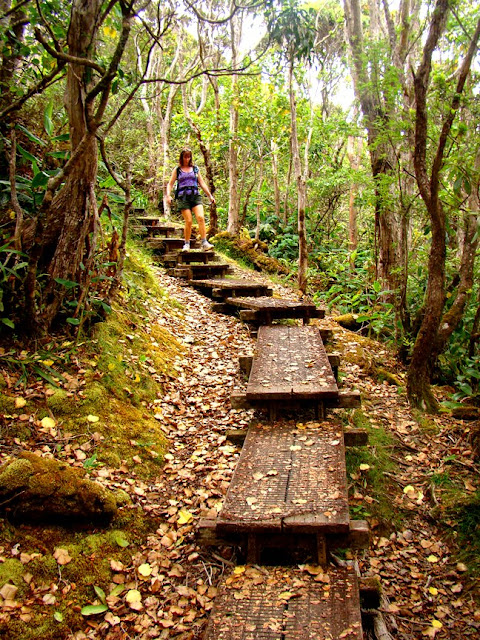 The lower parts of the trail are in a jungle setting, a tropical rainforest full of 'ohi'a trees and many other species. 'Ohi'a trees are one of the most adaptable trees on the planet, surviving in habitats as diverse as dry low elevation lava flows, and near alpine conditions at 11,000 feet. On Kaua'i, they are part of the rainforest canopy. 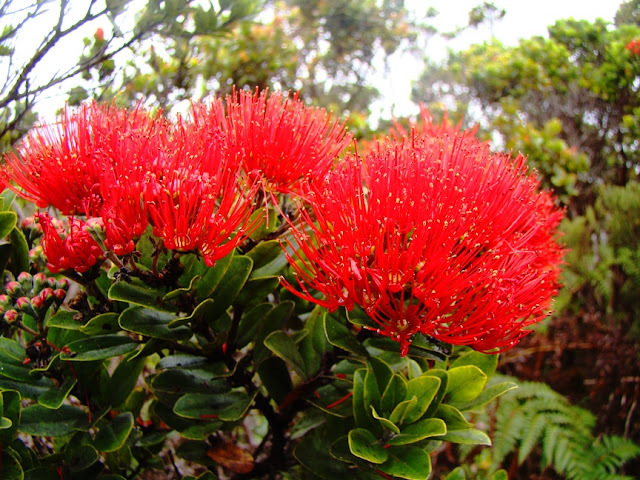 The trail climbs higher, and the rainfall is so extreme that the plants are stunted by the overabundance of water (the rain washes away soil nutrients). The vegetation consists of knee-high ferns and shrubs. 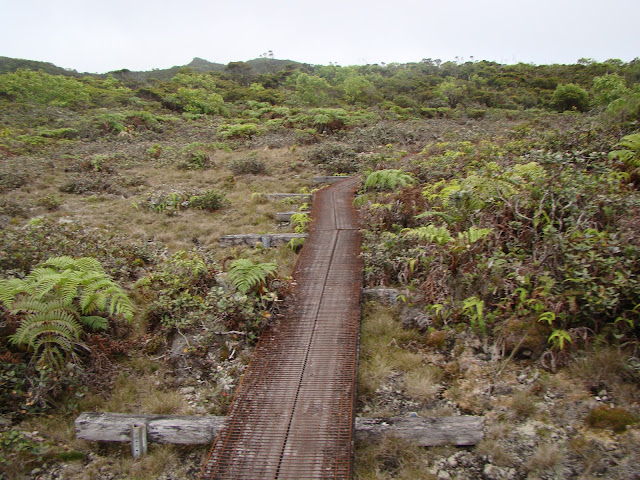 I was very lucky on the day I visited the Alaka'i Plateau in 2009. It was not overly cloudy, and we had a half-decent view of the summit area around Mt. Wai'ale'ale off to the south. We walked on, trying to reach the lookout at the end of the trail. 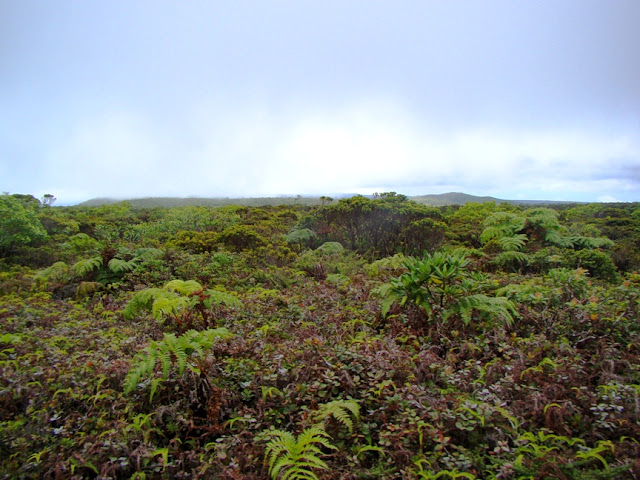 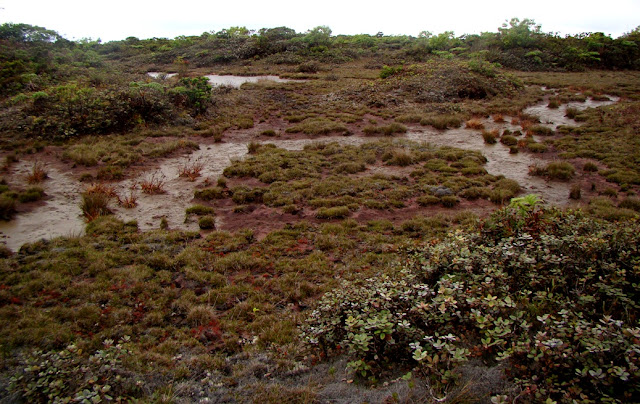 The mud grew thicker and the plant cover more sparse. At this point I was really appreciating the boardwalk. This landscape would have been an impenetrable bog without it. 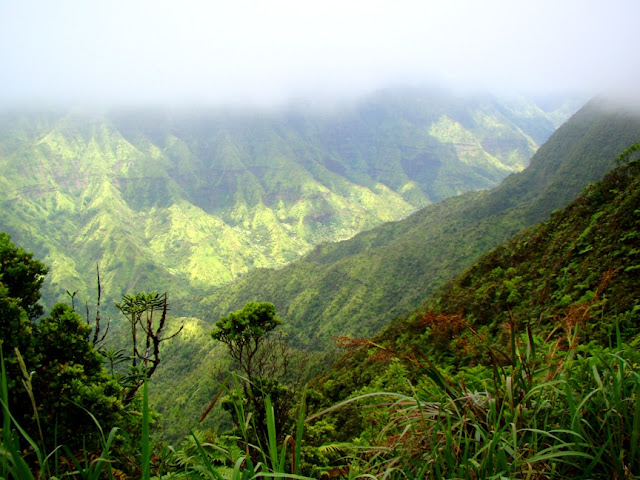 And then we were there! The clouds were starting to gather, but we had a momentary view of Hanalei Bay thousands of feet below. The scenery was stunning. Weather on the plateau can be so fickle. We had our brief view, but a few moments later when other hikers in our party arrived, the view had disappeared, not to be seen again. 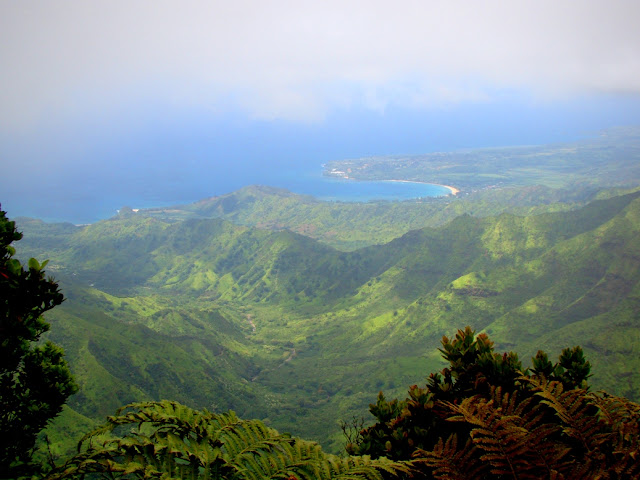 We hiked back down through the jungle. It was one of the greatest hikes I've ever done. I'm glad I did it though, back in 2009. The forest here is threatened. Global warming is affecting Kaua'i as it is so many other places, and the warming conditions are allowing the spread of the disease-carrying mosquitoes higher and farther into the interior of the plateau. It's like a noose tightening around a neck. 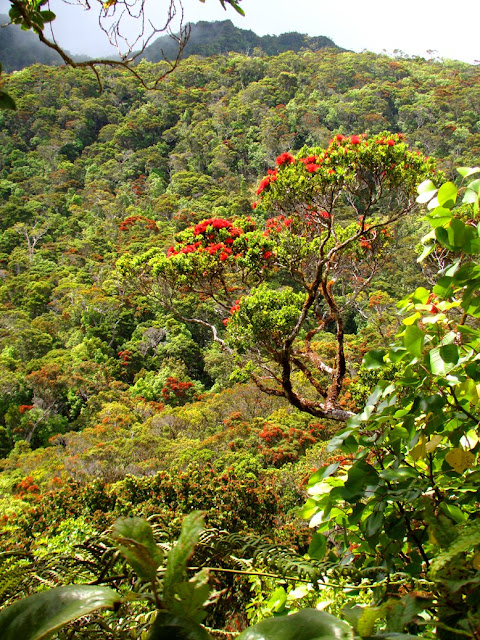 We are doing shameful things to our planet, and the present political atmosphere has just made things much worse. Global warming is accelerating, with profound effects being noted around the world. I despair over the recent election, because the American government will now be staffed by people who choose to ignore science. Kaua'i is just one place where the changes will be profound. We'll be saying good-bye to one of the most unique ecosystems on the planet.
Posted by Garry Hayes at 7:09 PM