Death Valley Days: The Third Day - This place is wild! 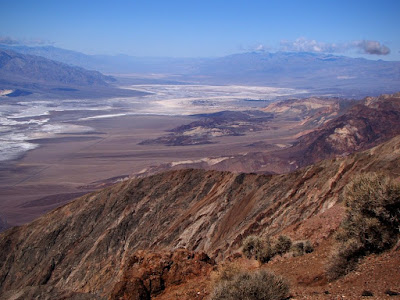 Trivia of the night: In what movie have we seen this view before? It was just one of the incredible sights on our third day through Death Valley National Park. The sun didn't just break through...it appeared in all its glory as the last vestiges of our storm blew east. Only a few drops fell during the night. 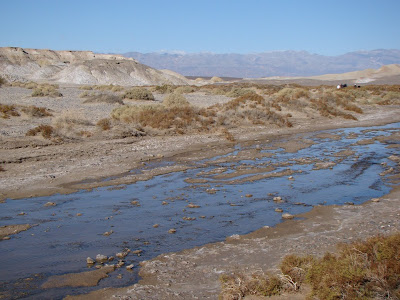 Other questions of trivia: What is the last thing one expects to find in the bottom of Death Valley, the hottest and driest place in the northern hemisphere? How about a permanent stream? And yet there is one, Salt Creek, which is caused by a structural tweak of the valley floor by faulting. The consequence is that groundwater is forced to the surface and flows for a distance of a mile or so before sinking into the ground again. This is a 'river' flowing below sea level! 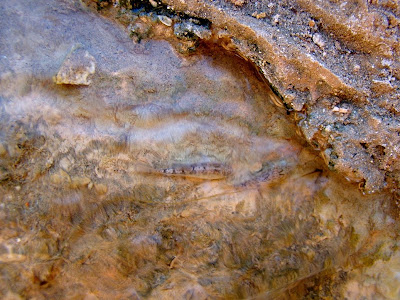 The only thing that could make this stream stranger is to imagine it filled with fish. It is. How in the world did they get there? In a word, they got here more or less by accident during the Ice Ages, when giant pluvial lakes (glacial meltwater lakes) filled the low basins of the Basin and Range Province. At some point a water connection was made with the Colorado River system, and fish moved into the freshwater lakes of Death Valley and other basins. When the ice ages ended 12,000 years ago, the lakes dried up, but isolated springs and waterways provided a refuge for a few lucky survivors. Since some of the water sources were salty and others fresh water, the fish diverged from a single species into at least five, with a total of 10 distinct populations. The Salt Creek Pupfish survive in the hottest environment of any fish on the planet, often as much as 100 degrees.
After visiting with the fish, we headed a mile high in the Black Mountains for a spectacular view of the valley at Dante's View. That's one part of the view in the picture at the top of the post, and the salt flats at Badwater are shown below. The faint turquoise color on the right is water on the playa surface, left over from December and January's storms. 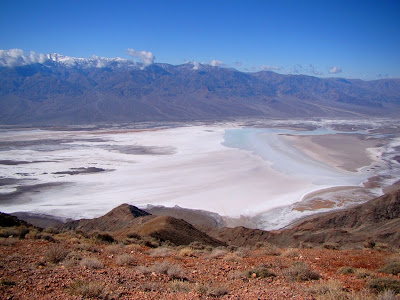 After taking in the view and talking about the alluvial fans at the base of the mountain, we headed down to Zabriskie Point to work on a project, trying to assess the problems with diverting a dangerous desert wash into the badlands topograpy below Manly Beacon. The students made their predictions not knowing that the diversion was already made 70 years ago. Their conclusions were pretty good, especially about the rapid downcutting in the soft shales and mudstones, and it was neat that they could immediately see the consequences of the diversion. 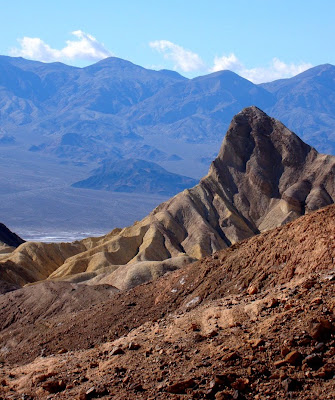 Gower Gulch (below), the diversion point, has carved downwards about 60 feet in as many years. It has an intricate set of meanders and loops, and it changes visibly from year to year. 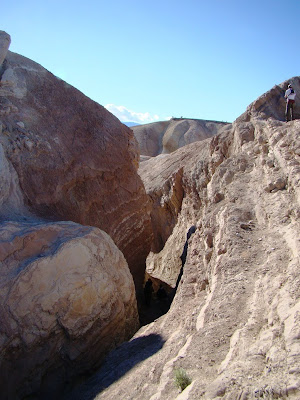 The lower fan of Gower Gulch has changed too, with the higher velocity floods carving a deep channel in the fan surface(below). 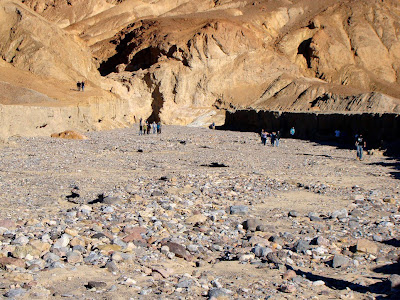 Our day was almost done with, but we had one more goal: Walking right into the heart of a mountain range, at Titus Canyon. Titus is a huge gorge, in places more than three thousand feet deep, and in the lower canyon the walls so narrow that passenger cars can barely pass through. Getting there required a bumpy three mile ride up the bouldery alluvial fan, and then we entered on foot. 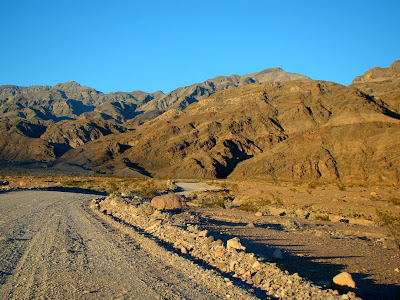 In the twilight the canyon was peaceful and quiet, and the gray cliffs towered above us. It was a good way to end the day's journeys. It's a starry night and we have to go home tomorrow, so I am off to sleep. We have a few more stops in the morning, so look for at least one more entry of Death Valley Days! Adios! 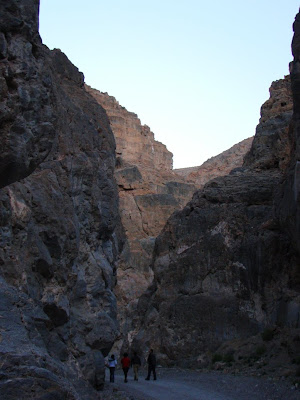 You got to see pupfish! How cool is that. Titus canyon was like walking into earth's sculptures, ancient yet ever changing.

Ghosts of Trips Past said...

You didn't drive down Titus Canyon? Its not like you own those vans.

No, we just drove to the mouth of the canyon and walked in a short distance into the Narrows. I did drive it a few years ago, and the vans did fine, the road was in good shape.