A Beautiful and Precious Day: How it was in Yosemite 2 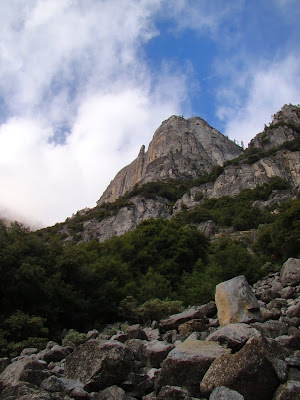 My geology field trip to Yosemite Valley last weekend was one of those stunningly beautiful days, the kind made all the better by the clearing storm that cleaned the air, filled the waterfalls, and left a wonderful pine-filled scent throughout the valley. Although I had two dozen students with me, I had a two hour break in the middle of the afternoon (because we needed to utilize the NPS trams to get around the valley, we made "appointments" at various spots on the valley floor). With those two hours I had a choice of walking four miles along the Valley Loop Trail, or sitting in a pizza joint and grabbing a tram at the last second. I opted for the former.

For all the times I've been to Yosemite Valley, the north side of the Valley Loop Trail was a new one for me. I'd been on parts of it here and there, but not the whole thing. It was pleasantly deserted, and offered some very nice perspectives on familiar sights from new angles. I started at Yosemite Falls and walked around the base of Yosemite Point (above), which towers about 3,000 feet above. That little spire near the tip is Lost Arrow, a famous destination for rock climbers. It formed as a consequence of vertical joints (fractures) in the granitic rock. 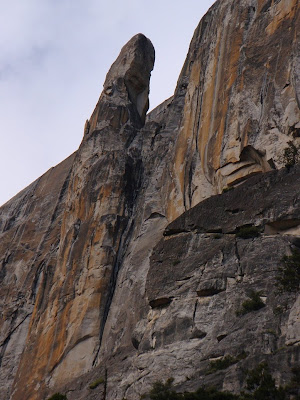 I had thought the trail stuck to the valley floor, but it actually climbed a hundred feet or more onto the talus slopes, giving a nice view down-valley towards the Cathedral Rocks and Cathedral Spire. These cliffs, famous, but sometimes overshadowed by El Capitan across the valley, are also the result of vertical joints. The Cathedral Rocks (slightly right and partly obscured by clouds) have widely spaced joints that could not be effectively quarried by the glaciers, the cliffs are bold and protrude as bold cliffs. 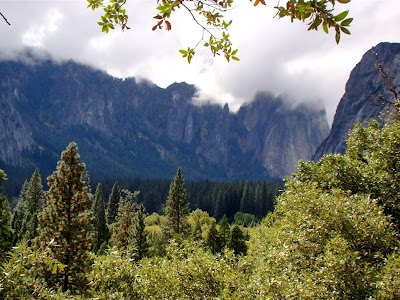 Zooming in on one of the Cathedral Spires reveals a more narrow and sharper tower. The cliffs are more closely jointed. Looking closely in the clefts, one can see fall colors starting up (click on the picture for a closer view). 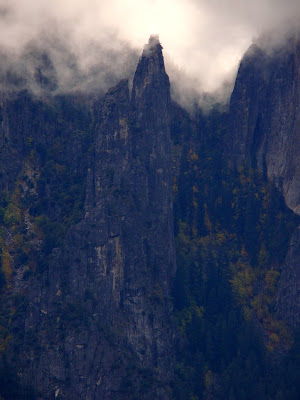 The trail is a pleasant and quiet way to explore the valley. It was not a crowded day anyway, but I seriously saw no more than 4-5 people in an hour. The sound of motors was present, but distant. 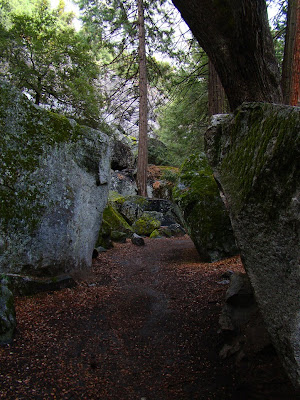 I wasn't the only person in Yosemite last weekend. Fellow teacher of geosciences SciGuy315 posted a series of absolutely stunning photos of a rainbow in Yosemite Falls, from across the valley on Sentinel Dome. With his permission, I've posted one of them here. Copyright is obviously his, check the link for contact info. 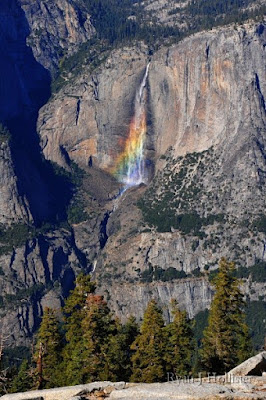 Precious? Every day in Yosemite is precious! If you want to learn more about the geology of this wonderful place, check out my newly revised roadguide to the geology of Yosemite Valley at Geotripper Images. I also did a themed blog series some time back called Under the Volcano and Into the Abyss.
Posted by Garry Hayes at 11:58 PM

Very nice to find a quiet trail in any NP. Maybe next year a fall trip to Yosemite. Ryan's rainbow shot is Awesome! I do so enjoy your field trips. Don't give up on summer Rangering.

i couldn't agree with you more!

Geotripper Images rules, Garry! What an awesome resource for teachers. You've inspired a new project for my photos, that's for sure. On related note, some of your weathering links are live but when clicked only opens a blank page. You're probably still working on that section, but it sometimes helps to know where the bugs are after deleriously staring at html for a while.

Keep up the great work!

Yes, there are MANY incomplete parts to Geotripper Images, which is why I haven't really given it a complete roll-out with bells and whistles. Much or most of the volcanoes section is complete, but not much of anything else. I got a good start last summer, spent a solid six weeks designing and posting photos, but then the damned grant proposal came along and wiped out my time for accomplishing any more. I've just started updating it again, and hopefully in a few months I can give it a grand opening celebration....

mr. hayes you have really awesome pictures. they're so cool. im having so much fun in your night class. when will you take me to your amazing field trip that are free and with free gas. lol awesome pictures again. this is my first time logging into your blogger website and im liking it. im going to post some everyday. your a awesome teacher. i cant believe im passing your class when your like one of my hardest teachers in my life. well i hope i pass so i dont need to retake your awesome class.

There is something sacred about every visit to Yosemite. Felt it when camping there as a child -- much more open, fewer "people". It was fun then to have bears visiting our campsite. Also enjoyed the firefall at night. It was a family tradition -- my grandparents camped there when they were young.

The hikes awe-inspiring; the vistas humbling. To be so close to the ferocious forces of nature -- plate tectonics, mountain building, volcanoes, glaciation -- and feel their amazing beauty. You capture it perfectly in your photos. Your students are very fortunate.

These days I spend most of my time in the Eastern Sierras. My brother helps to keep the back-country trails clear every year in the central-southern part.

Beautiful images, I never tire of this place. My parents first took me there in 1949 and I return as often as I can.