The Best Job in the World: A Teacher of Geology 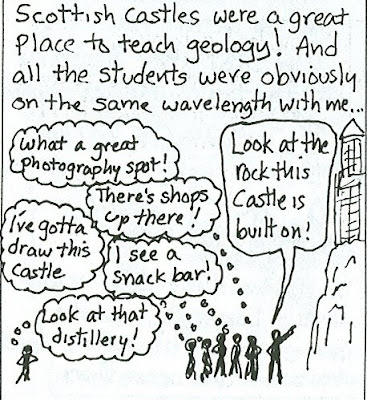 Some reaction around the geoblogosphere about the ranking of "geologist" as the 30th best career out of 200 various fields...dairy farming and lumberjacking rank the lowest. Perusing the list, I don't find my personal field specifically listed; although I think of myself as a geologist, I am actually a college professor who teaches geology, and "professor" isn't listed separately, although "Teacher" is listed at #127. On the other hand, "Mathematician" is numero uno on the list, and it specifically points out that many mathematicians work in an academic setting.
Personally? I think I have one of the best jobs on the planet. I have had the privilege of introducing thousands of people to the world of geology and earth science over the last twenty years, both in the classroom and in the field, including a few far-flung locations overseas. Yes, there are moments of administrative/bureaucratic nonsense I could do without, but these things do not dominate my time. State funding cuts threaten our campus, but either we support education in our state or we go down the economic tubes, so I think there will a reasonable assurance of job security for the foreseeable future. It took me eight years of college (with economic-related breaks) to get the degree that allowed me to seek my job, but it has paid off with 24 years of an enjoyable career, with a hope of 20 more!
Then again, there is this....
Posted by Garry Hayes at 1:17 PM

I totally concur. I feel like I've got the best job in the world -- a perfect fit for my interests and abilities.

Mathematicians probably gamed the results on the survey, don't you think?

I was listening to a spokesperson for the study on ScienceFriday and what he said is that their ranking does not measure people's happiness or satisfaction ... they were only characterizing objective and measurable aspects (e.g., earning potential, likelihood of getting hurt, etc.).

They then produced the ranking based on the score ... in hindsight they probably shouldn't have called some jobs "better" or "worse" than others since it's all a matter of opinion.

That would be true, BrianR, some people thrive on the stress that landed some jobs/career near the bottom of the list, and others, like nurses/doctors/social workers thrive on a sense of service...

I hope dairy farmers thrive. I love milk and cheese and yogurt...